NEC isn’t a name often heralded in regards to notebooks. Its efforts are generally restricted to the business arena, providing simple and functional notebooks to the hoards of office workers who require them. It’s very much a no frills operation, a fact that’s pretty obvious when you look at its latest offering, the Versa S970.


Measuring 332 x 240 x 35mm (WxDxH) and weighing in at a sprightly 2.2kg, the Versa S970 is nothing much to look at. On the outside it’s finished almost entirely in dull silver, while on the inside it’s a combination of that and a simple black finish around the display and keyboard. It’s all fairly anonymous stuff, while the relatively low weight can be attributed in part to the thin, low quality plastic used for parts of the chassis. As a consequence the S970 doesn’t feel especially sturdy, with the screen in particular being vulnerable to any outside pressure. 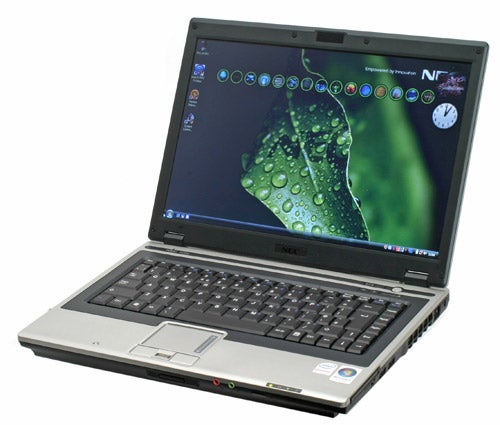 It’s just as well then that the Versa S970 is a cheap notebook. Our sample model retails for just over £760 inc. VAT and features a 2.0GHz Intel Core 2 Duo T7300, 1GB 667MHZ DRR2 RAM, 120GB 5400rpm SATA hard drive, a 14.1in 1,280 x 800 display, and DVD Re-writer drive. Network connectivity is provided by Gigabit Ethernet and 802.11a/b/g Wi-Fi, while there’s also Bluetooth 2.0 EDR and an Infrared Port. In addition to all this there’s also a Trusted Platform Module, providing secure encryption and identification verified via the fingerprint reader located between the touch pad buttons.


In addition, although our sample is a Centrino Duo system, NEC does provide the option of Centrino Pro notebooks that include Intel’s vPro IT management system. This system allows IT Managers to remotely manage machines connected to a network, then troubleshootand solve problems if and when they arise. Another option not included in this sample is Draft-N wireless, which although useful is probably less essential in an office environment where older wireless technologies still prevail. 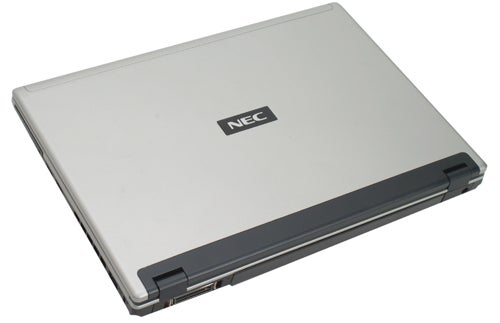 Overall this is a solid, if unspectacular, specification. A 2.0GHz dual-core CPU is well up to any challenges put to it, and a 120GB hard drive is ample enough. However, for running Windows Vista Business the 1GB of RAM will be a limiting factor, especially if intending to run several programs at once. As such 2GB would be recommended, unless you request XP Professional – which is an option.

Continuing the theme of cheapness is the 14.1in display. At this price the 1,280 x 800 native resolution is par for the course, however of more concern is the lack of brightness. Compared to other notebooks I’ve looked at the S970 has one of the dimmest, least vibrant displays. Even at its brightest it does little to impress, and viewing angles are equally disappointing with notable brightness and colour shift at relatively shallow angles. Even less discerning users will notice the lack of clarity, and it’s an issue that’s bound to grate over a prolonged period of time.

Equally annoying is the rather archaic design, and this isn’t even in reference to the looks. Whereas most notebook manufacturers have adopted a semi-modular approach, allowing easy to access to the memory, hard drive and other components via small removable plastic plates, the NEC requires you to take off the whole of the underside of the notebook to access any of the components. This means unscrewing eight screws, slipping off the casing and then obviously repeating the trick once done; all of which seems a bit much if all you want to do is upgrade the system memory.


At least in connectivity there’s little to complain about. On the left edge you’ll find D-Sub, seven-pin TV-out, USB and modem ports, with the rest of the space taken up by the optical drive. On the front there’s a card reader which supports SD, MMC, MemoryStick and xD card formats, in addition to a microphone input, headphone output and an IrDA port.

On the right edge you’ll find a PC Card slot, and below that a four-pin FireWire port. Then there’s a further two USB ports, bringing the tally to three in total, while an Ethernet port and lock slot are located the other side of the main air outlet. Finally, on the back, there’s the DC-in and a Port Replicator connector. If one were being picky a fourth USB port would have been nice, but overall there isn’t a great deal to complain about.


The same can mostly be said about the keyboard, which was surprisingly pleasant to type on. Each key has a nice crisp response without feeling sticky or heavy, however there are a few of the typical layout quirks. To begin with there’s the classic Fn key to the left of the Ctrl key, but slightly more annoying is how the cursor keys aren’t offset, which can cause problems.

For performance testing the S970 was put through out usual set of notebook tests, including PC Mark 05, our own in-house Photoshop Elements and Virtual Dub test and a subjective battery test. Overall the S970 performed quite capably, comparing well enough to the more expensive Dell D630 and Acer’s TravelMate 6292. 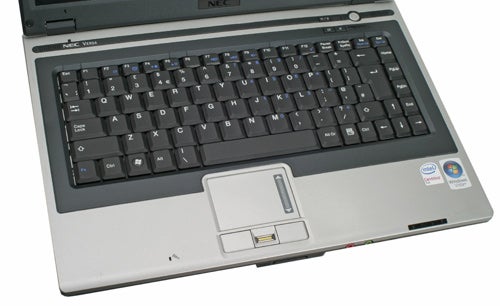 PC Mark results were equitable throughout, despite the fact that our sample had only 1GB of RAM. In our in-house tests results were more mixed. In Photoshop Elements the S970 was quicker by 20 seconds or so, but this result was reversed in the Virtual Dub test where it was around the same amount of time slower. In any case you’d be hard pressed to tell a difference in real world usage.


For battery testing the S970 was used for basic word processing and web browsing tasks; using the Balanced performance profile with Wi-Fi enabled and the display brightness set to full. With a standard six-cell battery the S970 managed a creditable three hours, and this without making much use of the Power Saving profile, disabling inactive devices and reducing display brightness. 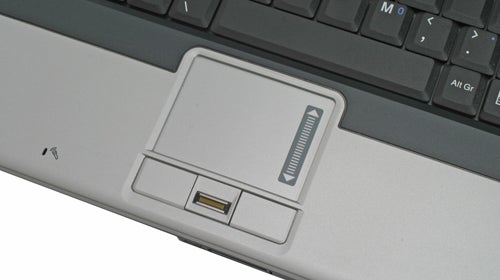 Moreover, NEC does provide options for both a nine-cell extended battery and a massive 12-cell one as well. Given the performance provided by the standard six-cell battery, these should extend battery life significantly.


Regrettably, however, this positive spin can do nothing to assuage the many issues regarding the design and overall quality of the S970. Its poor screen and cheap feeling plastics do little to inspire confidence, while everything about it smacks of outmoded design.


A solid performer it may be, but the NEC Versa S970 is notably behind the times and there are plenty of better options out there for the business user.