A couple of weeks ago I reviewed the dc7700p from HP. It was the first vPro enabled computer I’d had the chance to look at and I was impressed by both its performance and the potential provided by the vPro technology. Now another stalwart of the business PC market, NEC, has provided us with its take on the vPro platform, the Powermate ML460 Pro. 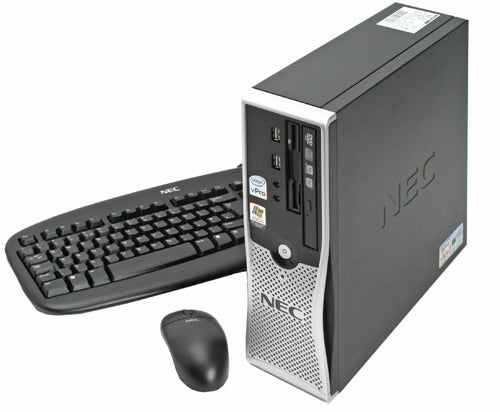 Like the dc7700p, it’s an ultra-slim desktop PC that’s designed to fit neatly under your monitor and still leave you with enough space on your desk to actually do some work – unless you have a CRT monitor, of course. This is a great form factor that, when combined with an efficient CPU, gives a small, quiet, yet powerful and flexible system. 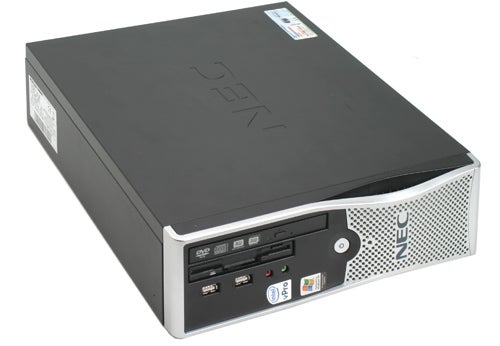 Even though I covered the capabilities of the vPro platform in my dc7700p review, I’ll just give you a quick recap.


Like Centrino, vPro is a platform brand. Any computer based on Intel’s new Q965 chipset with an E6000 series Core 2 Duo CPU and an 82566DM Gigabit Ethernet controller will conform to the vPro standard.


What this provides you with is the ability to have out-of-band (when a PC is physically connected to a network but is turned off or otherwise out of action) access to your PC. A system administrator can access information about a PC’s specifications, or turn it on remotely to perform updates or amendments. It also provides a host of security features by having a security agent embedded in the chipset. This can be used to monitor network traffic and isolate an infected machine from the network completely independently of the OS.


The PC is reassuringly sturdy and is well protected by a steel chassis, which is finished in a tough black paint. It’s quite happy sitting horizontally or vertically and has rubber feet on its bottom and right side to ensure it doesn’t slide around your desk. A slim silver plastic fascia surrounds the front and provides ventilation for the CPU fan intake.


Though the NEC and the HP are undeniably similar looking, there’s something more appealing about the NEC front panel. The symmetry and clean lines just work, for me at least. 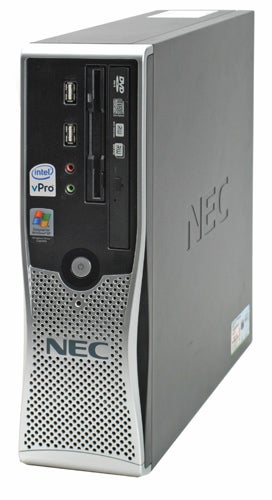 On the front panel you’ll find two USB ports, microphone and headphone jacks, a DVD-ROM/CD-RW drive, and a floppy drive. As seems to be the trend nowadays, there’s no reset button and you’ll have to rely on holding down the power button to cold boot.

Moving round the back of the case, the ML 460 Pro features a very good range of connection options for such a small PC. Not only are there plenty of USB ports, NEC has also chosen to add in legacy serial and parallel ports as well. Two PS2 ports for your mouse and keyboard, three audio jacks, and a VGA port round out the connectivity options. The case can be padlocked and there is an intruder alarm in case some shady type tries to get in.

Not being a shady type (honest), I had no trouble getting inside and was very pleasantly surprised by what I saw – this has to be one of the best designed cases I’ve ever seen.


The hard drive is mounted on a flap that opens out towards the back of the case and the floppy and DVD drives are mounted on a flap that opens towards the front of the case. When opened up you have unprecedented freedom to access all the internal components – even some enthusiast cases with removable motherboard trays pale in comparison. Of course, being a vPro platform, you’ll probably never have to actually touch the hardware as it has a full three-year on-site warranty. 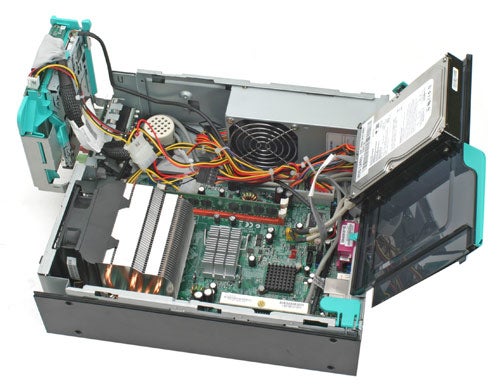 As you would expect, upgradeability is limited with only a spare memory slot and single PCI slot (courtesy of a riser card) free. Beyond that you’ll have to swap out components. With this level of standard equipment, though, you are unlikely to need to upgrade anytime soon.


The CPU cooler is very quiet except for a start-up whoosh that subsides before the system has finished POSTing. The only other fan in the system is in the power supply from where it expels air out the back of the case. Amazingly, the CPU HSF was cool to the touch all the way through our testing – a testament to how efficient the new Core 2 Duo architecture is.


Rounding out the package is an NEC branded Logitech keyboard and mouse. The keyboard is rather ‘squishy’ but was nice enough to type on. The mouse is optical and tracked well for general office use.


I tested the system using SYSmark 04 SE, PCMark05, and our in-house 2D benchmark. Naturally I’ve pulled in the results from the HP dc7700p review for comparison. Again, I didn’t test for 3D performance because these systems simply wouldn’t be used for 3D applications. 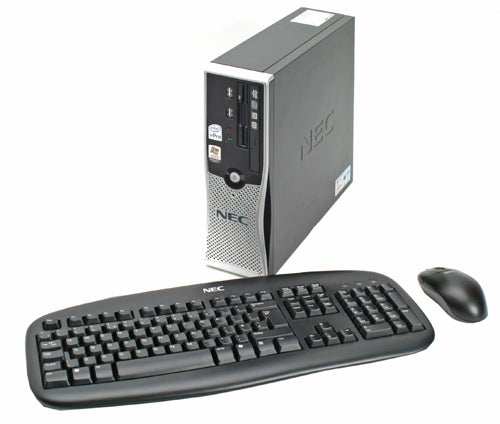 The first thing I noticed when analysing the results was that PCMark was wildly different to all the other benchmarks and greatly favoured the HP. This would appear to be a spurious result from our previous testing as the NEC outperforms the HP in all the other benchmarks. Unfortunately, we don’t have the HP in our labs anymore so cannot retest that machine. What is quite clear, though, is how both PCs are of sufficiently high power to cope with anything that an office environment might throw at them. Indeed this is the only possible criticism you could point at this machine, it is perhaps overpowered for most offices. Unless you absolutely need vPro, you may be best served plumping for a system configured with a lesser Pentium D with a smaller hard drive. Don’t, however, be tempted to skimp on the RAM, you’ll need everyone of those bytes to run Vista without grinding to a halt.


The NEC Powermate ML 460 has a great feature set and admirable performance to boot. It offers better connectivity and accessibility than the HP though you are getting a slightly larger PC. If you need vPro then you won’t go far wrong with this machine. If you don’t need vPro then the lesser configurations still offer great performance and ergonomics for a good price.