If that bloke who made Supersize Me had only made it about TVs instead of McDonald’s meals, he’d surely have ended up a heck of a lot happier – and healthier. For there can be few more rewarding sights in a hardworking technology journalist’s tough life (…) than being faced with a flat TV which, like NEC’s 61XR4G, stretches out across more than 60in of his living room wall. Sweet.


Especially when this behemoth really is surprisingly easy on your eye and room décor. For NEC has boldly gone against the silver fad still dominating the larger echelons of the flat TV world and plumped for a really cool black finish, stylishly offset by a nice metallic trim and reflective strip.


The screen’s stylish design gets you thinking that NEC has definitely made the 61XR4G with home rather than business users in mind. And indeed, the screen resides in the ‘residential’ section of NEC’s website. But a quick check on its connections seems to tell a different story, as we find neither any SCART sockets nor a built in tuner – digital or otherwise. The lack of a tuner means you can’t even call the 61XR4G a TV; it’s merely a screen. 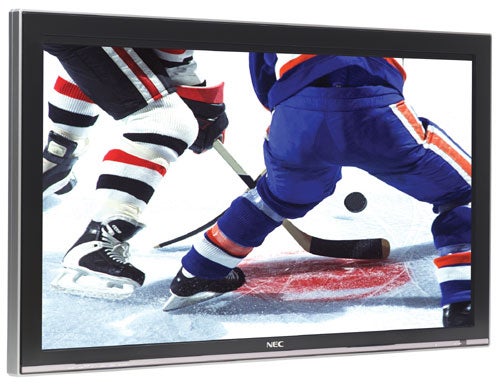 Before we get too downhearted by this, though, we should point out that an external tuner box is available as an option for around £180. And in any case, it’s worth reflecting that arguably a 61in screen might not be the best partner for standard definition pictures anyway. After all, at this sort of size only a screen with extremely talented image processing will be able to show broadcast digital or especially analogue standard definition pictures without revealing every last bit of unpleasantness inherent to the broadcasting signal.


In other words, the 61XR4G likely imagines itself belonging to someone with, say, a Sky HD box, upscaling DVD player and Xbox 360, so that it can be fed only the finest diet of source material. And with an asking price of practically £9k, it’s probably fair to say that anyone buying a 61XR4G will have some if not all of that kit – and quite possibly be installing the screen into a dedicated home cinema/gaming room to boot.

It’s a relief, then, to find that what it lacks in standard definition connectivity the 61XR4G makes up for in HD connectivity, as it sports twin HDMIs (switchable between PC and video use) for digital HD sources, and twin component jacks for analogue HD sources like the Xbox 360.


The 61XR4G’s onscreen menus surprisingly contain a very decent collection of film-friendly features. For instance, there are two Theater picture presets; a noise reduction system; a cinema mode for improving how motion looks in movie sources; separate tweaks for the red, green, blue, yellow, magenta and cyan colour components; and the option to adjust the gamma levels. You can even call in some picture in picture facilities – including the option to show two HD sources simultaneously. 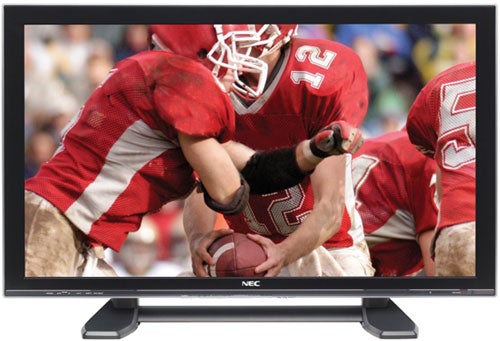 Let loose on a variety of Xbox 360 games, and HD movie recordings on our resident Sky HD box, the 61XR4G gets off to a snorting start by doing a particularly fine job of emphasising all the lovely fine detail and sharpness that make HD so special. You can see individual pores in skin during close ups, every leaf or brick in long distance shots, and pretty much every level of texture in between. Outstanding.


We were also taken with the NEC’s colour handling. This has tended to be a weakness of previous NEC plasma offerings, but here tones look really strikingly natural, be they full-on bright saturations or subtle muted ones. It’s nice – and again surprising – to also see that colours appear largely free of the striping that still afflicts many plasma TVs.


Having said earlier that we wouldn’t really expect a screen as big as the 61XR4G to handle standard definition very well, it actually does pretty decently with ordinary PAL material. Pictures appear considerably less noisy, soft and unnatural looking than we’d expected – making us wish, after all, that NEC had included a digital tuner and some SCARTs.

As you may suspect from our image quality mark of seven for this screen, though, it does have one or two problems. The biggest concerns its black level response, as it tends to make what should be dark parts of the picture instead look greyed over. This can additionally obscure background details, and make dark scenes feel one-dimensional.


We also couldn’t help but notice that as objects move across the screen, they tend to do so in a really quite juddery fashion – particularly during standard definition viewing. It’s possible that this helps the 61XR4G remain impressively untroubled by the fizzing noise over motion that still afflicts many plasma TVs, but that makes it no less distracting in its own right. 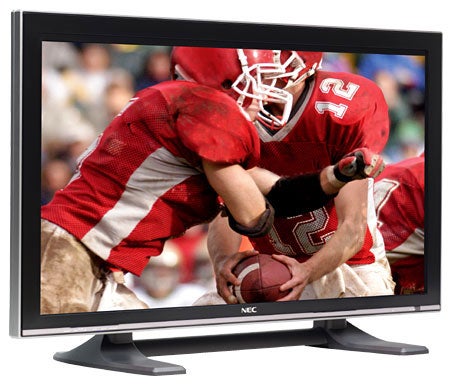 Our final gripe with this NEC’s picture is that it’s just not very bright. This tends not to upset you during bright scenes; indeed, you might argue that its bright scenes look slightly more natural than the gaudier efforts pumped out by some rivals. But the low brightness emphasises the relative drabness of dark scenes, and in doing so often makes the picture feel somewhat unbalanced.


When it comes to sound, we should point out that the 61XR4G doesn’t come with speakers included in its asking price. If you want a pair of NEC’s own matching models they will set you back a rather hefty £400 – so it’s just as well that they’re actually excellent, with exemplary amounts of power and audio range. The only things holding the audio mark down to an eight are the presence of quite a bit of cooling noise from the screen, and some lip-synchronisation problems (caused by the pictures taking longer to appear on the screen than it takes for the sound to reach the speakers).


In many ways NEC is to be congratulated for the 61XR4G – not least for its pictures’ extreme sharpness, lack of noise and natural colours. In fact, if NEC could just sort out its black levels and light output next time round, we could be in for a real king-sized treat. For now, though, the 61XR4G will have to be content with a place in the big-screen plasma world’s second tier.