When Navman and Mio merged earlier this year, and it was announced that products under the Mio brand would not be sold any longer in the UK market I was more than a little surprised. Though it never gained mass popularity in the UK in the way firms like TomTom and Garmin have, I’ve always had a soft spot for Mio products, especially its C620T, which I thought was a cracking sat-nav.


Since the merger it’s been pretty quiet, though, with no new Navman/Mio products produced at all in the first half of the year. Now we finally have the first progeny of that relationship – with the Navman S50 3D – a budget sat-nav with regional mapping of Great Britain and Ireland. 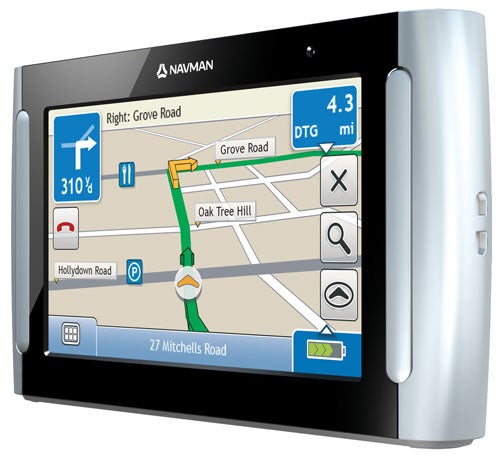 If Navman and Mio were proud parents, however, I think that one would be getting a bit worried at this point, as externally the S50 bears very little resemblance to the Mio products of old. In fact it looks identical to the last Navman product I last looked at – the S30 back in October 2007 – with its black and silver livery and big rounded corners. Only the S50 3D’s larger 4.3in screen (compared to 3.5in) sets it apart.


Fire it up and the theme continues. It runs Navman’s SmartST 2008 navigation software and this bears no trace of Mio’s influence either. Not that that’s a bad thing – I always felt that Mio’s software left a lot to be desired in the usability stakes despite a change for the better with the C620T. SmartST 2008, as on the S30, is extremely straightforward to use with large, easy to read icons on the menu and an uncluttered clear map view. I especially like the pop-up menus on the right that can be tapped to launch detailed information such as speed, ETA and distance, access map browse tools, or change views.


So is there any sign of Mio’s influence here at all? It’s difficult to tell when the S50 is so similar to previous Navman devices, but that 3D name tag does at least hint at some Mio influence. Unfortunately this doesn’t refer to the topographic mapping included in the last Mio product I reviewed, but instead to the addition of a selection of 3D models of famous landmarks. All it means is that, as you approach the London Eye, St Paul’s Cathedral or Big Ben, a 3D graphic of looms on screen, just to reassure you that you’re in the right place.


Exciting, huh? Well, not exactly. The trouble with this is that, 90 per cent of the time the facility is pretty useless – only major landmarks are in the database and outside central London the models are few and far between. Added to this is the fact that none of the models have labels attached to them – it would be nice to know what the buildings are as you drive by. 3D navigation sounds sexy, but in this instance it’s about as far from being a groundbreaking navigation aid as Lands End is from John O’ Groats.

There are, however, more useful developments elsewhere. The first is an online business directory search, which is a genuine step forward over the usual static POI database. Dubbed Navman Connect, this hooks up to your phone via Bluetooth and uses its internet connection to search out local businesses.


To test it I entered the names of a few obscure local shops – the sort of thing you’ll never get in a normal sat-nav POI – and was surprised to find that every one was in the listings. The address of the fish shop at the top of my road was located and returned, as was that of a small independent off-license. It’s a very useful addition to this sat-nav’s armoury of features, but there is one caveat – you have to know precisely what you’re looking for because, disappointingly, you can’t search the directory by category or business type.

Since it already uses Bluetooth for the directory, the S50 3D also boasts hands-free phone features. You can answer and make calls on the S50 3D, download the address book from your phone and write text messages on the device’s touchscreen keyboard. This isn’t usually a feature we see in cheap sat-navs, so it’s nice to see it here.


The Navman S50 3D also boasts Sirfstar’s new InstantFixII technology. This effectively allows GPS devices to predict more effectively the position of satellites in the sky, resulting in (supposedly) a much faster time to initial satellite fix, especially when the device has been switched off for a few hours or more. But, though the S50 3D is pretty quick at picking up a signal lock – around a minute from off even in extremely challenging situations – it’s not noticeably quicker than other sat-navs I’ve tested. It does, however, hold onto its signal well once locked on – more reliably than the Navigon 2100, for example, when the tall city buildings loom.


Finally, the Navman S50 3D also has EGNOS compatibility, something I’ve previously only seen on handheld hiking GPS devices. EGNOS is a system (WAAS is the US equivalent) that uses a land-based reference signal to enhance the accuracy of GPS signals. Again, however, its addition is of dubious benefit as it’s unlikely to help in the only situation where you’re likely to have problems with a weak satellite signal, in a city, with tall buildings either side of you since the EGNOS signal is transmitted across the earth’s surface.

With everything added together one thing is clear – this is a highly effective and very usable sat-nav. Maps are extremely clear and easy to read, especially the onscreen next turn indications. These are displayed as icons in the top left corner of the screen and with a 3D arrow overlaid on the map itself, both of which make it abundantly clear which way you need to go. I found complex roundabouts particularly easy to navigate with the S50 3D – an area that many sat-navs fall down on. The big 4.3in, 480 x 272 screen, too, allows loads of detail to be squeezed onto the screen, and you can see a long way down the road and around you, even in 3D view. 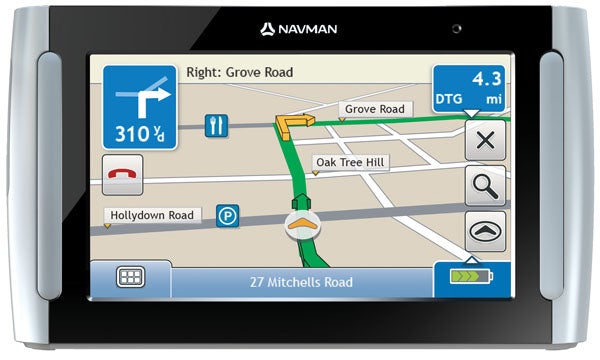 In testing, I found voice instructions were delivered in a timely fashion and very clearly and there were very few problems with the routes it chose, though it won’t – as the high end TomTom’s do – take into account real world journey times, just speed limits. Routes were recalculated swiftly when I strayed off route and you get 12 months worth of speed camera updates too.


It isn’t quite perfect. There’s no lane assistance feature as there is with the latest TomTom and Navigon devices and traffic information is not included as standard. The screen updates with a slow and stuttering action, which isn’t ideal when you’ve got lots of turnings linked tightly together and a strange choice of which mapping details it displays makes browsing the map to add waypoints rather more difficult than it should be. Cities and towns aren’t marked especially clearly in overview 2D mode, for instance, which makes finding points on the map by hand tricky.


Despite some niggles, however, the S50 3D is a usable and effective navigation device and one that’s particularly good value for money. It’s unique – as far as I can tell – among sat-nav’s this cheap (£111) to feature a 4.3in screen and its business directory search is another feature that sets it apart from other low-cost navigation devices. More importantly, it beats the disappointing (article:TomTom-One-V4-Europe-22 TomTom One V4) and just edges in front of the (article:Navigon-2100-Sat-Nav Navigon 2100) as the best budget sat-nav around.