Navman has been producing standalone navigation devices for a while now, and I have to admit to having a soft spot for the company. There – I’ve said it.


The latest in the line is the Navman iCN 700 series. It comes in two versions: the iCN 720 that I’m reviewing here, which includes maps of the UK and Ireland. The iCN 750 includes maps for Western Europe and will set you back £499 (inc VAT). In all other respects the two devices are the same.


The iCN 720 brings the latest craze in navigation – widescreen – to the iCN series. The extra screen width is useful as it (obviously) allows more information to be displayed, but the knock on effect is that the hardware is both larger and more cumbersome to carry around than I’d like. You can carry some smaller navigation devices around for walking, but I suspect the sheer bulk of the Navman iCN 700 series puts that out of the question. 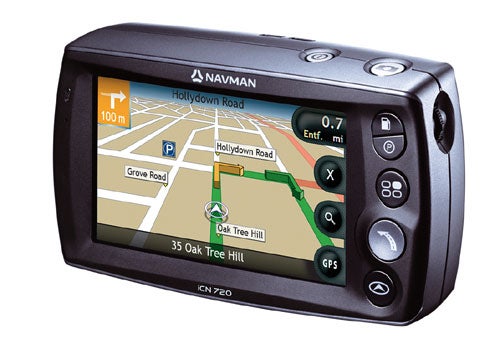 For the record, our Navman iCN 720 has dimensions of 136 x 77 x 31mm, and weighs a hefty 300g – twice that of many PDAs and three times that of your average smartphone.


The physical design leaves a little to be desired visually, and the row of buttons to the right of the screen seems to take up a lot more room than it should. But when you are actually using the kit in a vehicle its somewhat clunky appearance translates to buttons that are easy to find without bothering to look too far for them.


I can’t go far into this review before mentioning NavPix. The Navman 700 series devices have integrated digital stills cameras (1.3 megapixels). The lens is on the back of the device, and when you shoot an image it is captured with embedded location information. You can then use the picture as a point to visit on a trip. You can transfer pictures to your computer and share them with other people, either by emailing them or by uploading to the NavPix area of the Navman Web site.

I am having a little trouble getting my head around this as an idea that will encourage people to buy Navman navigation devices, but the company has committed itself to NavPix beyond the 700 series, and has made a business alliance with the Lonely Planet, which has a series of NavPix at the Web site for you to download. Apart from a general wondering about whether the idea will prove popular, I can’t help thinking that the iCN 700 series devices are just too heavy to carry around in order to snap photos – especially if you are carrying a digital camera too.


It feels a little old fashioned in these days of PDAs with integrated GPS antennae that you have to twist the antenna out of its flush fitting at the back of the casing to get things going, but this is as good a method as any of asking the kit to ‘please start fixing my position now’.


The SiRFstarIII Generation 2 antenna gave no trouble at all during testing, and maintained a signal even with the Navman iCN 720 on a table by a window with a very obscured view of the sky. 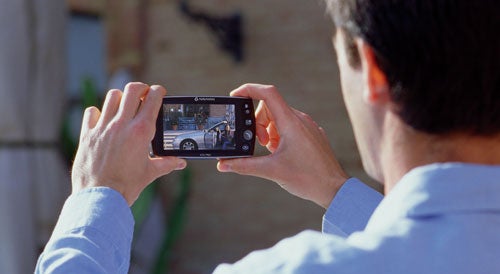 The right edge of the casing has a volume control wheel, which you can simply press to mute the system. On the left edge is the power socket (you get both mains and car power adaptors), connector for an external antenna, mini USB port for PC connections, and an SD card slot. You can use SD cards for storing maps and NavPix. On the top edge is the mains power switch and camera shutter button.


The column of buttons sitting to the right of the screen that I’ve already mentioned holds some of the best features of the iCN 700 series. Ported from its predecessor device are two buttons marked with a P symbol and a fuel pump. Press the former and it shows the nearest parking to your current location. Try the later and you get the nearest fuel stop. Both of these could be a real boon when you are travelling through unfamiliar territory.

Beneath this pair is a button which takes you to the main menu screen, while the next button down in the row takes you to the ‘Go To’ screen. Both these screens show off well Navman’s approach to the touch screen user interface – the six on screen buttons are very large, their graphics clear, and it is extremely easy to find the one you want and hit it with a finger.


The same goes for the address entry screen, which has a pretty large tappable keyboard. You do need to use a finger tip or nail here rather than the pad of your finger, but the system is well thought through. Both numbers and letters sit on the same screen, so you don’t have to make unnecessary taps to flick about between separate screens to enter these. When you enter a destination it is shown in preview format on a map, and you can choose to ‘go’ there immediately. 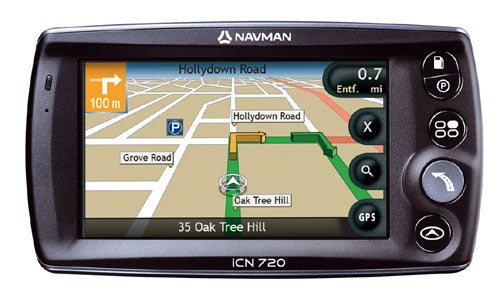 The bottom button cycles you through the various map views available – 3D map, 2D map, next turn, and turn list. As already noted the wide screen allows you to see a lot more information than you’d get with last generation devices. This amounts to more than just a bit of extra map. It means that the non map information, such as the distance to next turn, distance to go and so on, don’t obscure the map too much. And in the ‘next turn’ screen there is room for a huge direction arrow and a map of your current location.


The Navman iCN 700 series supports full postcode navigation, and on most occasions that was all I used when testing – though for some reason it wouldn’t let me enter a building number after a postcode which meant I didn’t quite get full ‘door to door’ navigation.

I had a bit of trouble starting off with a city or area designation. Often the device’s idea of where my desired streets was differed from my own – garnered from the address as supplied by the resident. So when I entered an area then a street the street wasn’t found. Starting with the street name and scrolling through all iterations of that street told me this. To be fair this is not Navman’s problem but its data providers, but be warned, it may cause you the same frustration it caused me.


As usual there is a liberal POIs (Points Of Interest) database and you can incorporate these into trips. The spoken instructions never left me confused or unsure what to do next, and were delivered in good time. System volume was loud enough too. So no gripes there. 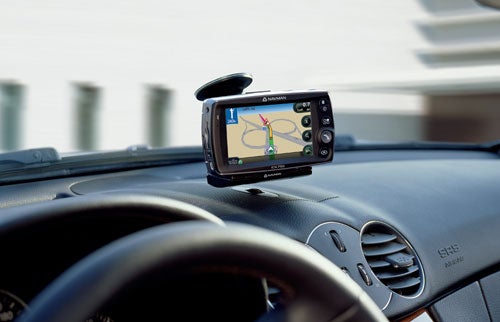 The car mounting kit left me a little nonplussed, though. It is made of three sections: the windscreen sucker, a section which holds the iCN 720 and a plastic nut that joins the two sections together. The nut comes completely away from the other two sections, and I nearly lost it under my car seat at one point. The iCN 720 can be swivelled any way you like thanks to a ball joint that holds the two main sections of the mount together, which is great.


The main problem is that the car mount is very small, which means the iCN 720 rests close to the windscreen. This may mean you find it difficult to reach if you have a large shelf above the steering wheel. In general I prefer swan-neck arrangements.


Like I said at the very start of this review, I have a soft spot for Navman. Certainly the iCN 720 performed well on test with the exception of finding streets as noted above, and the side buttons and wide screen display work together to make a very user friendly system. I wish Navman had chosen a different car mount, though, and I do struggle to see the point of NavPix.