What is the Nanoleaf Light Panels Aurora Rhythm?

Who said smart lighting just had to be functional, conforming to the shapes and layouts that traditional lightbulbs have given us? Certainly not Nanoleaf. With the Light Panels Aurora Rhythm, you get something completely different, with nine colour-changing triangular LED panels that you can stick together in practically any order.

With this kit, you also get the Rhythm module, which lets the lights flash and colour change to sound around them, all without needing to use your phone’s microphone.

The Aurora comes with nine triangular panels in the box. They’re very light, but feel rigid without any flex in their cases. There’s nothing to see from the front, but turn each panel over, and you see that each panel has three connector slots: one per side. 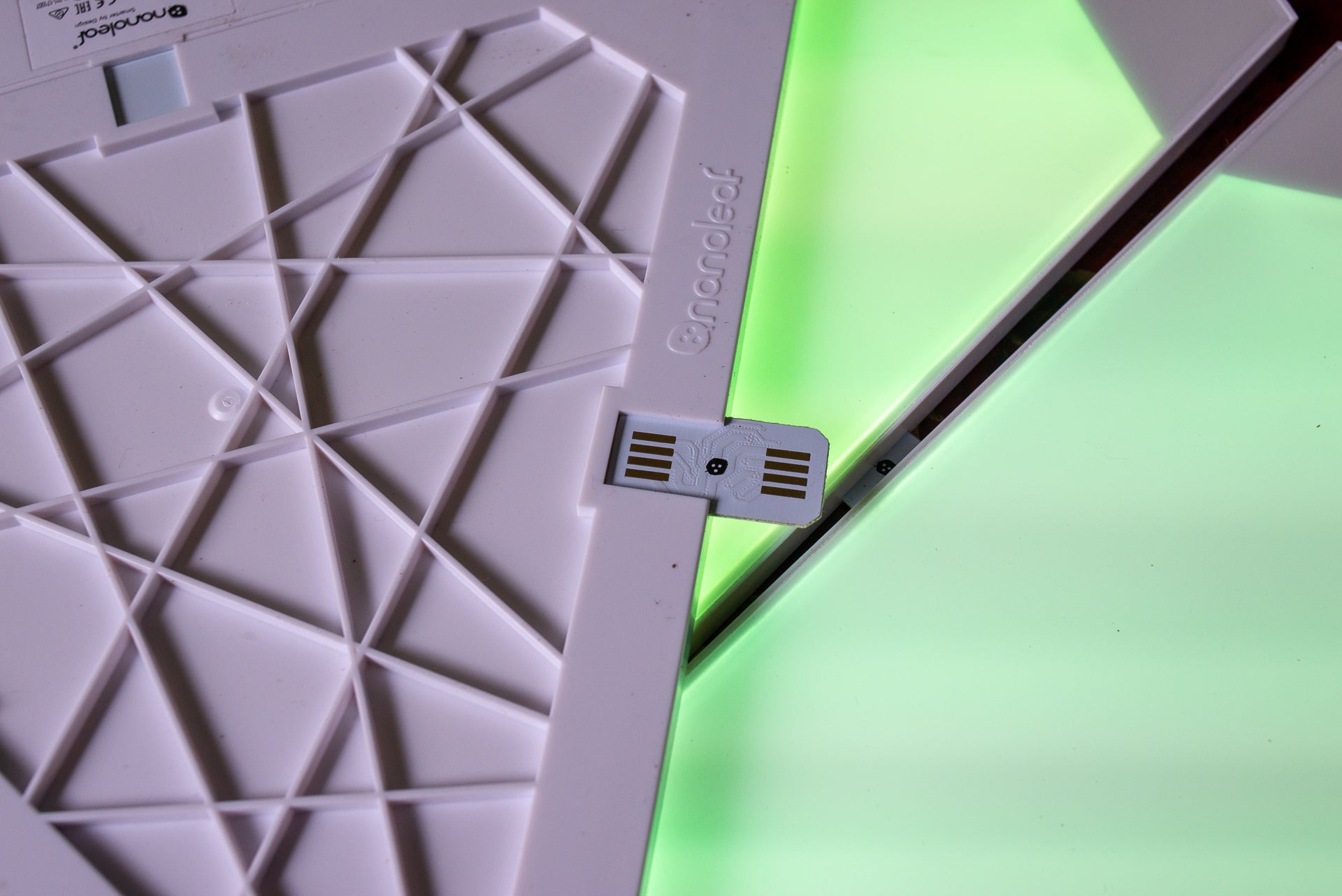 There are nine SIM-like connectors in the box, which you slide into a panel’s connector to start building the shape you want. Each connector slides firmly in place, but you should be careful, as they don’t have enough strength to hold everything in place. Instead, the supplied double-sided sticky fixers are used to hold the panels in place on your wall; the connectors are merely there to pass a power and control signal.

There are two more elements in the box. First, there’s the power unit, which slides into a spare connector on any of the Light Panels. This has a power button and a button to cycle through the light options. 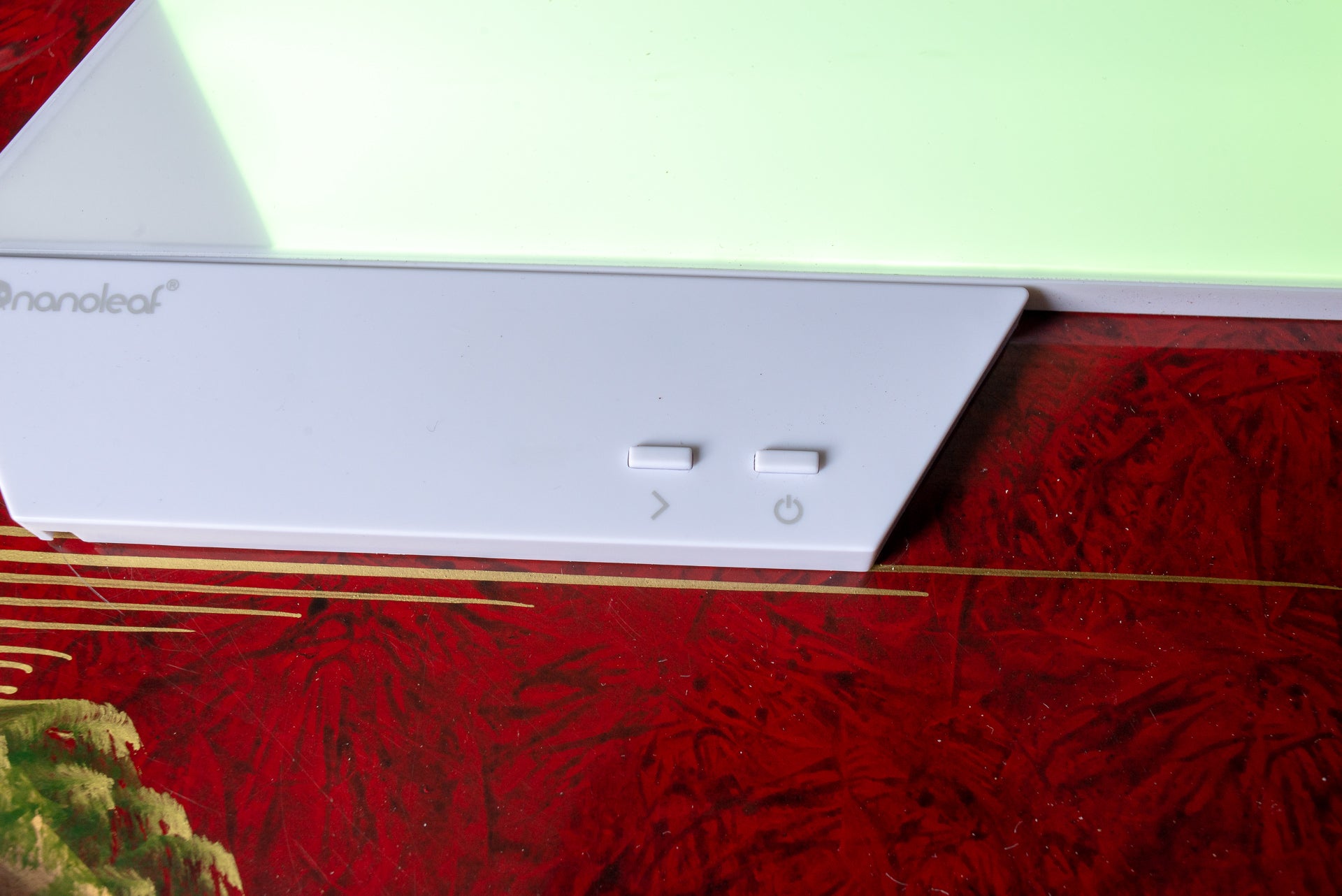 Secondly, there’s the Rhythm module, which makes the lights change to any audio. This also plugs into a spare connector on any of the light panels and has a button to turn it on. 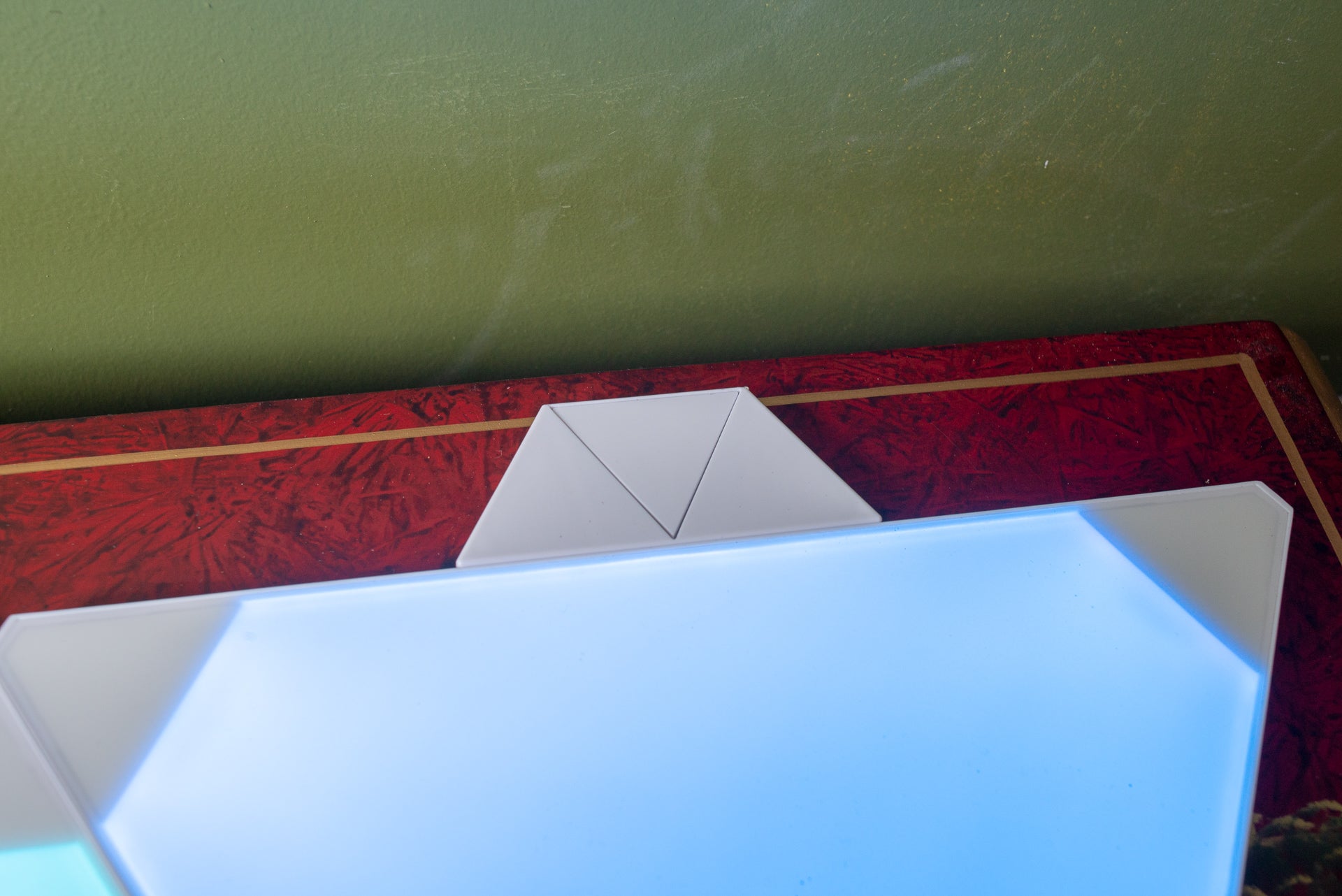 Physical controls are neat to see, as it means that you can quickly turn on the panels without having to reach for your phone or use voice commands.

The hardest job  is getting the panels the way that you want them. Nanoleaf provides paper templates in the box, but I found that the easiest way to plan was to lay the panels out on a table and play with the shape that way.

The app also has a layout generator that can give you some ideas if you prefer. This defaults to nine lights, but you can increase or decrease the number, and drag the panels around to make adjustments. The Aurora Rhythm supports up to 30 panels using a single controller. 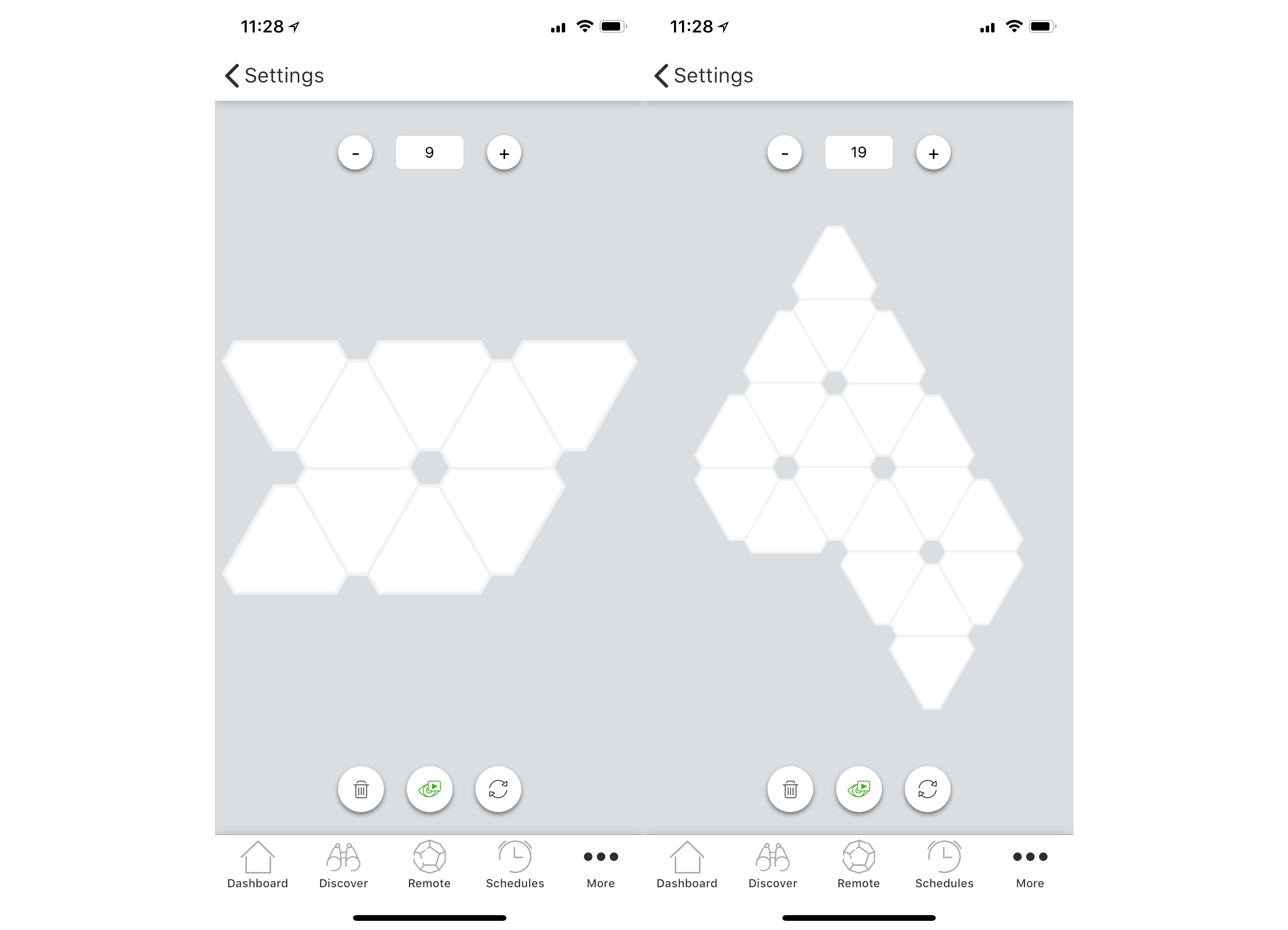 Once you’re happy with the layout, the Aurora Rhythm can be transferred to a wall using the provided double-sided sticky tabs. Transferring the lights one at a time to the wall is a little tricky, so spend some time getting it right. 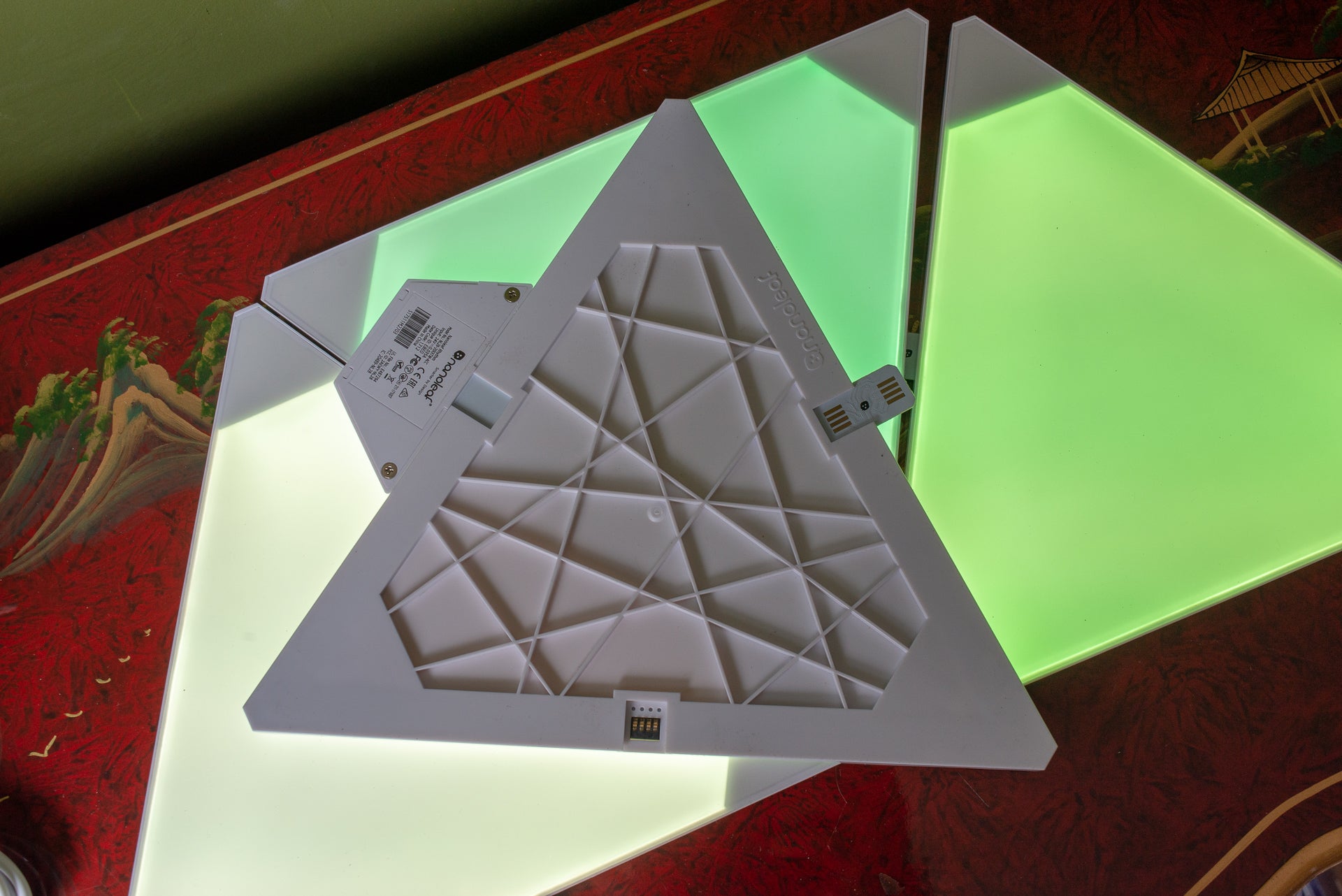 You can tap the power button to switch it on, then use the button to cycle through a few light patterns. If you want the lights to respond to sound, tapping the Rhythm button does the job.

You get more control if you hook the lights up to your Wi-Fi via the app for Android or iOS. If you use iOS then the simple connection process will also connect the lights to Apple HomeKit, so you can control them via Siri or the Home app. Just make sure you keep the HomeKit code safe, which is written on the instruction manual. 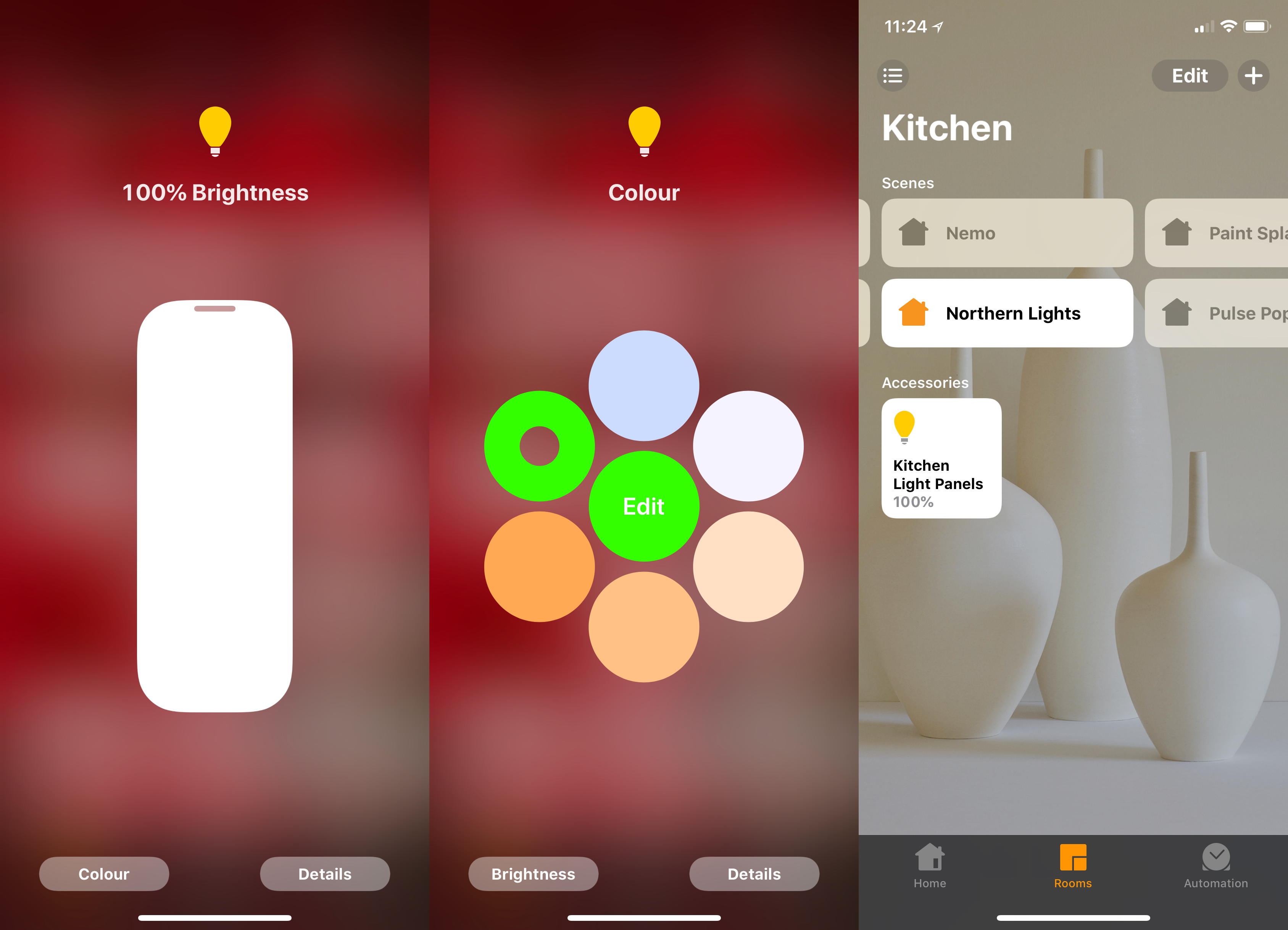 From the app, you get full control over your panels’ lights. The main Colours section lets you pick from a set of pre-defined patterns, with the light gently shifting and changing between the colours in the palette. You can also tap the Paint icon and set the Aurora Rhythm to one colour (16.7 million to choose from) or temperature (bright white to warm white – 1200K to 6500K). With brightness controls, the Aurora operates much like any other smart light in this mode. With each panel operating at 100 lumens, the light is more atmospheric, rather than replacing a lightbulb.

Tap the edit button, and you can individually paint each panel one of the colours from the selected scene’s colour palette. You can select different palettes and create your own, too. Cleverly, the Nanoleaf app detects the layout of your panels, so you don’t need to manually drag them into the shape that you’ve created. 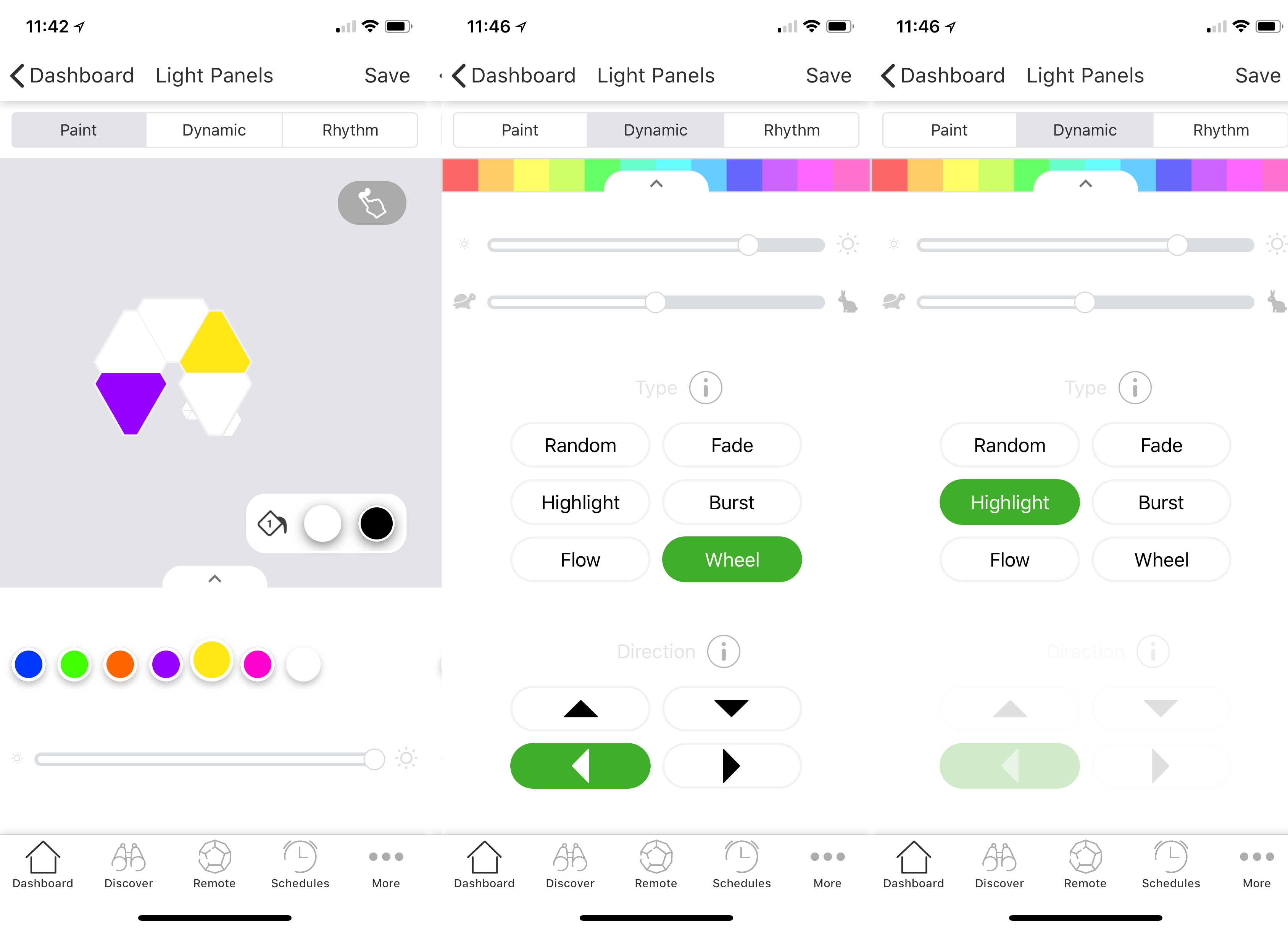 For dynamic lighting patterns, you can select the colour palette, which defines the order in which the colours pass through; choose the speed of transition; and even the type of transition used. It’s a little fiddly to change settings, and there’s a huge amount to play with, so expect to take a few days if not weeks tweaking everything to work the way you want.

Likewise, the Rhythm option lets you pick the colour palette you want, with an interactive waveform showing how sound will trigger the colours that you’ve picked. Then you can choose the type of effect you want, from Fireworks, where the colours pop and jump, to Meteor Shower, where panels light and ripple.

Huge fun is the best way to describe the Aurora Rhythm. At its most basic, you get a smooth wall of light that adds interest to a room or, with dynamic lighting, colour-changing lights help set a mood.

It’s with the Rhythm module turned on that it really starts to shine. With the panels popping and jumping to the sound around it. The Rhythm module is really sensitive, picking up gentle sounds and loud music alike. Best of all, unlike similar options on other lighting systems, such as LIFX, you don’t need your phone out, wasting battery life.

Apple HomeKit support lets you control the lights from the Home app. Scenes are pulled in automatically, and you can also control all of your light panels, setting the brightness and colour. You get slightly less control via Home, and can’t, for example, set individual panels to a particular colour. For integration into an automation or for controlling all of your lights from one place, it’s a handy extra level of control.

More importantly, HomeKit support means that you get Siri voice control. In particular, if you’ve got a HomePod, you’ve got quick voice control to toggle the Aurora Rhythm on or off, set the brightness or colour, or to turn on one of the scenes. Siri works well, responding quickly to commands.

While the Aurora Rhythm can’t be described as cheap, at £219.99 it’s well-priced considering that you get nine panels and the Rhythm add-on. That’s significantly cheaper than rival systems that don’t have the integrated microphone, such as the LIFX Tile.

If you don’t want the Rhythm part, the standard kit is even cheaper at £179. Although, if you’re going to buy Nanoleaf Aurora light panels, you may as well go the whole hog and get lights that react to sound.

Ultimately, the flexibility, level of control and lighting that proves to be huge fun makes the Nanoleaf Aurora Rhythm a winner if you want some real statement lighting in your home.

Smart, fun lighting done the right way, these LED panels can change the mood of any room.