What is the Naim Audio UnitiQute 2?

It’s an all-in-one audio player that acts as a hub for your entire digital music collection, playing tunes locally from USB drives, iPods and external sources or streaming them over a network through its Wi-Fi and Ethernet connections. You can even listen to the radio through the built-in DAB/DAB and FM tuners or access internet radio stations.

As the ‘2’ of the name suggests, it’s the follow-up to the hugely
successful UnitiQute, launched back in 2010. This new version boasts
enhanced sound quality and multiroom functionality, while 192kHz/32bit
file streaming and a DAB/DAB tuner now come as standard. Sounds great,
but so did Men In Black 2 before it was released – let’s see if this is a
sequel worth waiting for. 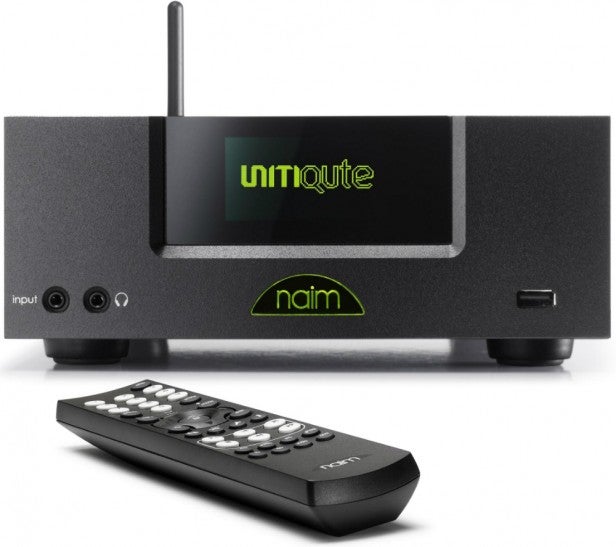 The outer bodywork looks identical to the original UnitiQute, and its compact dimensions are indeed much cuter than most of Naim’s big, daunting boxes – this one’s well-suited for use in smaller rooms. Its burly, esoteric black powder finish really looks the part, and build quality is phenomenally good – the extruded, die-cast enclosure is preposterously heavy and rigidly bolted together, plus all the buttons and sockets have a really solid, premium feel to them. Then again, for £1,150 perhaps we shouldn’t be surprised.

The thick front panel is free from clutter. There are no buttons, which means everything is controlled with the remote control. Most of the fascia is taken up by a high-contrast OLED display panel, which crams in a lot of crisp green text without ever feeling cluttered. When adjusting the volume or toggling inputs, the display switches from small text to huge digits so you can see it from the sofa. 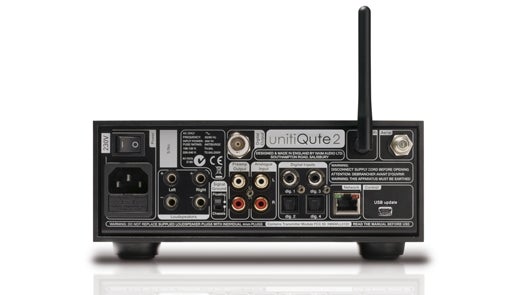 There are three sockets on the front – a 3.5mm minijack input (for both analogue and optical digital signals), a 3.5mm headphone jack and a USB port for USB drives and iPods. On the back is a comprehensive set of connections, including four digital audio inputs (two optical, two coaxial); a BNC digital output to feed an external DAC (with a BNC-to-RCA adapter in the box); analogue stereo input; preamp outputs to feed an external amp; an Ethernet port and a mini USB port for services updates, which replaces the RS-232 on the original UnitiQute.

The UnitiQute 2’s big selling point is its network music streaming capability via Ethernet or Wi-Fi. You can play music from UPnP servers (PCs, NAS drives) and it supports a wide range of file types – FLAC, WAV, ALAC, AIFF, OGG Vorbis, MP3, AAC and WMA, up to 192kHz/32-bit resolution (limited to 96kHz/24-bit for ALAC). There’s even support for gapless playback on all formats except Windows Media and Ogg Vorbis.

Added to the Naim’s impeccable streaming credentials is the new multiroom feature, which allows you to play the same music on up to four Uniti devices in different rooms of the house. It’s enhanced by a new Party Mode within Naim’s n-Stream app, bringing all connected units online simultaneously at the touch of a button. 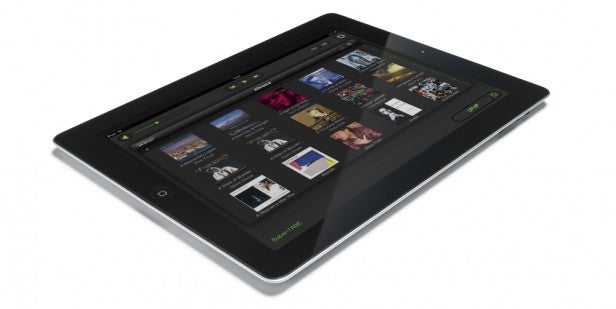 Thanks to the inclusion of vTuner 5, you can access a plethora of internet radio stations, or listen via DAB or FM. Load up a USB drive and the Naim can play all the formats listed above, again up to 192kHz/32-bit resolution.

The USB port is also certified for Apple products. It’ll charge the device while in use and you can browse audio files and playlists on the front display panel.

As befits a premium audio system, internal components are of the highest order. Alongside the Burr Brown 192kHz/32-bit onboard DAC are pre and power amp modules that borrow their design from higher-spec Naim products, namely the Nait 5i and NaimUniti. Power-wise. The amp delivers 30W per channel into 8ohms.

The only thing missing from the spec sheet is Bluetooth, but with so many other ways of playing music we’re not sure you’ll need it – and it doesn’t really fit with Naim’s audiophile ethos either.