My confidence in the nVidia nForce 4 SLI Intel Edition chipset was not exactly at its peak after the past couple of reviews. The MSI P4N Diamond didn’t inspire me with a lot of confidence either initially, but this turned out to be due to a faulty board. But once I received a replacement board things improved considerably and it seems like nVidia’s Intel platform is far more stable than I first thought.


So, let’s put my initial concerns behind us and move on to what the P4N Diamond has to offer. As with the K8N Diamond this board has a black PCB, but more importantly it has also inherited the Creative Labs SoundBlaster Live! 7.1-channel sound with optical and coaxial S/PDIF outputs. It might not be as good as some of the latest sound cards from Creative, but it is far superior to any other current onboard solution – it has built in audio possessing which no AC97 or even the new HD audio controllers can compete with. 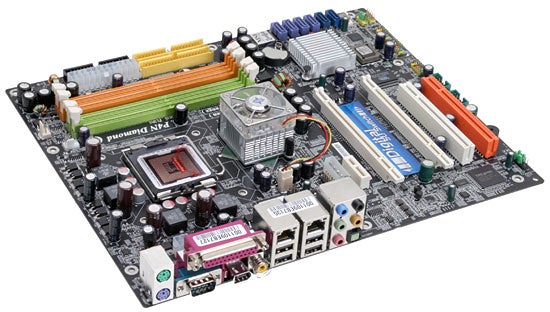 However, my absolute favourite feature on the P4N Diamond is the new digital SLI switch. Instead of the small piece of PCB that most other SLI boards use, MSI has incorporated a row of components that automatically detects if there is one or two cards installed. This is then reported to the BIOS, which sets the correct mode. Hopefully this is something that other manufacturers will adopt, to save users the trouble of opening up their case when they realise they’ve forgotten to flick the switch.


Although the P4N Diamond doesn’t ship with the combined WiFi/Bluetooth card that some of the K8N Diamond boards have, the orange slot is still present, so you can buy one as an optional upgrade.

There are still plenty of features on the P4N Diamond and MSI has even improved upon the design of the K8N Diamond by adding a x1 PCI Express slot. However, this means that there are only two PCI slots and if you purchase the optional WiFi/Bluetooth card you’re only left with one. That said, I doubt that you’d need to add much to this board to make it a good setup.

On top of the integrated Gigabit Ethernet controller provided by the nVidia chipset MSI has added a second PCI Express Gigabit Ethernet adapter. Add to this the integrated SATA RAID on the chipset and a Silicon Image controller with a further two SATA connectors for a total of six along with two IDE connectors, and you’d have a hard time finding a case that can handle all those drives. FireWire and USB 2.0 are of course both present and correct.

As the nVidia nForce 4 SLI Intel Edition chipset is made up of two parts unlike the AMD boards, there are some design differences. The northbridge has a fairly tall heatsink fitted with a fan while the southbridge has a low profile aluminium heatsink with a copper core. A further change is the inclusion of a Molex connector just above the x1 PCI Express slot. This supplies extra power to the x16 PCI Express slots when the board is in SLI mode.


The fan connectors are located were you expect to find them, although the rear one has been occupied by the chipset cooler, so if you have a rear case fan you’d have to hook it up via a Molex connector. The other three fan headers are towards the front of the board, one four-pin for the CPU cooler and two standard three-pin ones. One other clever feature, as long as you can keep your fingers away from it, is the clear CMOS button. Rather than having a traditional jumper, MSI has fitted a small push button which makes it far less fiddly when clearing the CMOS. 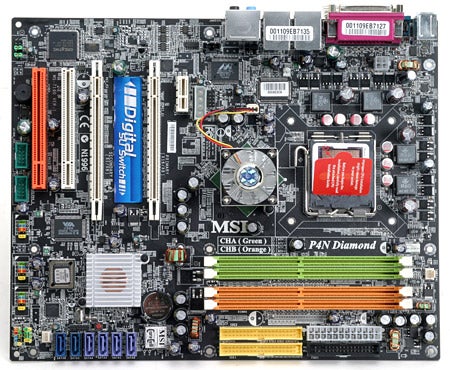 MSI is not known for being stingy when it comes to bundled accessories with its retail boards and the P4N Diamond is no different. You get two rounded IDE cables and a round floppy cable, four SATA cables and two SATA power adapters with two connectors on each. On top of this you get MSI’s D-Bracket which consists of two USB 2.0 ports and four LED lights for fault diagnosis.

There is also a FireWire bracket with single six-pin and four-pin connectors. As this is an SLI board there is of course an SLI bracket in the box, while MSI also supplies a handy bracket tailored to hold the SLI bridge in place during transit. Finally there’s the MSI CPU Clip which makes it easier to install the LGA processors – it drops the CPU into the socket in the correct way, making things far simpler for those with larger fingers. 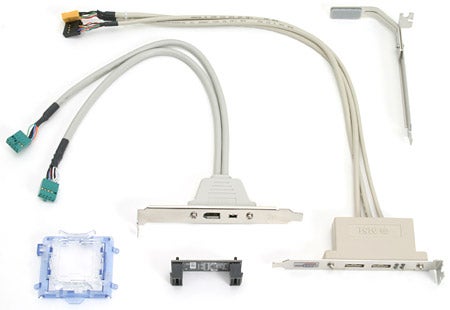 The P4N Diamond does have one shortcoming; it’s not as fast as the other two Pentium 4 SLI boards I have tested. To be fair, it’s not a lot slower, but the Asus P5ND2-SLI beats it in the 3D tests, although the scores are similar in SYSMark 2004. A BIOS upgrade would most likely solve this and as this is still a very new motherboard, there’s hope that with a mature BIOS the performance will increase.


Still with a SYSMark 2004 score of 227 this is not a slow board by any means in terms of application performance and the overall PCMark 2004 score of 5381 backs this up. As we’ve changed our FarCry and Half Life 2 benchmarks slightly these numbers aren’t comparable with the other two Pentium 4 SLI boards. 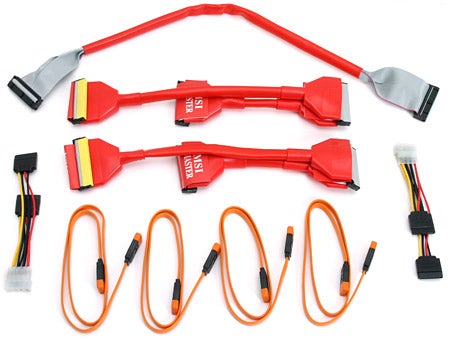 As with the K8N Diamond the P4N Diamond doesn’t come cheap, but then again, neither does any Pentium 4 SLI board at the moment. At £150.34 the P4N Diamond offers pretty good value for money considering the features you get. If you want to combine a Pentium 4 processor and SLI graphics, the MSI P4N Diamond is the best nForce 4 SLI Intel Edition based motherboard to date in terms of features and stability. However its performance could do with a boost.


After some initial problems MSI came through with a replacement board that proved to be rock solid. The P4N Diamond is definitely the Pentium 4 SLI board to go for as long as you’re not worried about cost.