As the name suggests the MSI P45 Platinum is based on the new Intel P45 chipset. This is an evolution of the superb P35 and you need to take a close look to spot the differences between the two pieces of silicon. 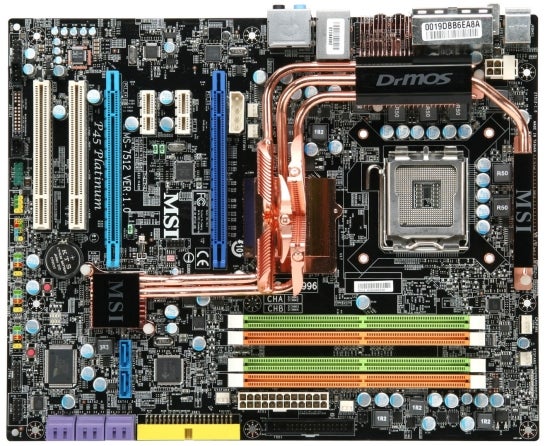 
This is a useful change, but it’s under the surface with the result that the P45 Platinum looks very similar to the P35 Platinum. Indeed, the only discernable visual difference on the P45 Platinum is the Circu-Pipe 2 cooling system, which has been heavily revised from the original Circu-Pipe that we saw on the X38 Diamond and X48 Platinum models. 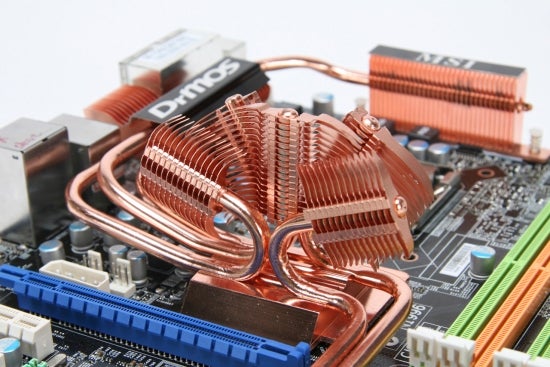 This new system adds a small vertical cooler to the end of each of the five heatpipes that are used to conduct heat from the chipset and power regulation hardware. These five coolers are arranged like the cylinders of an old aircraft engine on top of the Northbridge heatsink, where they look neat and provide plenty of space for the CPU cooler.


Processor support with the new P45 is unchanged from P35. Its maximum official front side bus of 1,333MHz rules out the Core 2 Extreme QX9770, however MSI claims that its range of P45 boards will overclock to 2,008MHz. That’s an unusual quad-pumped figure of 502MHz, which is a big step up from 333MHz and should give overclockers plenty of scope.

Intel has doubled the amount of memory that the P45 can support, with a new limit of 16GB compared to the 8GB addressed by P35, which sounds handy but it’s hard to see that it will benefit many desktop PC builders. The speed of the memory that is supported by P45 is the same as P35 and tops out at DDR2-800 or DDR3-1066, but this is where things get interesting.


Those are the official Intel figures so we are relying on MSI and other vendors to add support for faster memory. MSI claims that its various P45 models will either support DDR2 at 1,200MHz or DDR3 at 2,000MHz and as the P45 Platinum has four DDR2 memory slots we thought we knew what we were getting. 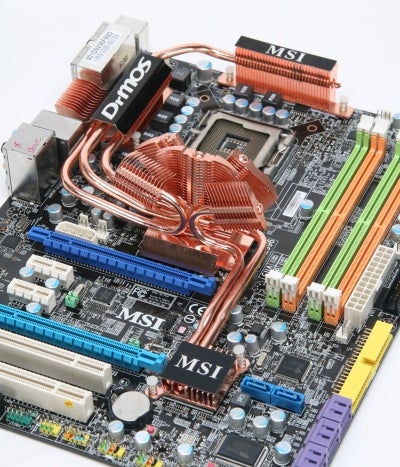 Initially, however, we ran into some problems. The BIOS correctly identified that our Corsair Dominator memory was capable of running at 1,066MHz, but system performance was pathetic as the front side bus was running at 133MHz instead of 333MHz.


Raising the speed manually in the BIOS resulted in a system that refused to POST. After some back and forth it became clear that the Auto memory settings were trying to run our Corsair Dominator memory at 1,000MHz or more, however any speed above 800MHz would cause the system to freeze. Raising the front side bus to 1,333MHz was fine provided we kept the memory speed down to 800MHz, so it was clear to us that a BIOS update was required to unlock the proper memory speeds. 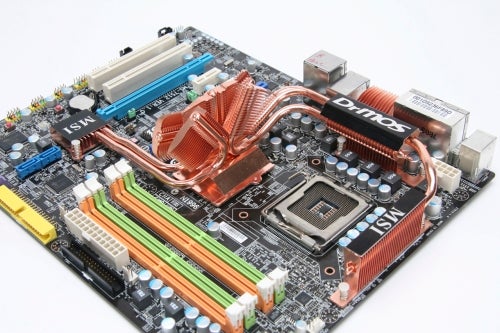 Thankfully, MSI did eventually supply us with a new BIOS – 10J to replace 10H. This new BIOS solved the problems we’d encountered and after the update was complete we were able to run the memory at a proper speed, even if it made no difference whatsoever to the test results. This didn’t come as a surprise as we hadn’t changed the front side bus but settled for raising the clock multiplier and 800MHz DDR memory doesn’t present a restriction to a 333MHz front side bus.


As an aside, it’s worth noting that updating an MSI BIOS is a pain in the neck as the BIOS doesn’t have a flashing utility and you cannot force the Live Update software to load a file from your hard drive. You can’t even use an old fashioned floppy as the BIOS file is 4MB in size, so the only practical course of action is to format a bootable USB key and then copy across the flashing utility and BIOS file.

The chipset cooling system was cool to the touch throughout our testing, which may be due in part to the new Circu-Pipe 2 design, though the change in chipset fabrication process from 90nm to 65nm probably helps, too. There’s another element to the power/heat/cooling cycle as MSI has rejigged the power regulation hardware around the CPU socket. Its DrMOS system uses chips that combine three components in one to tidy up the appearance and layout of the board, while also claiming greater efficiency. 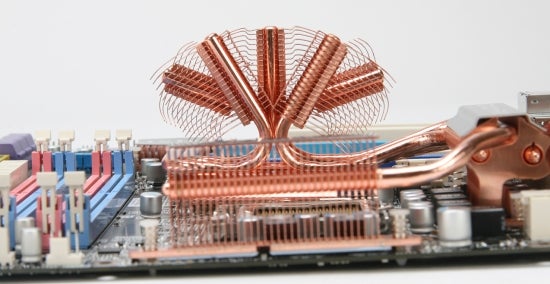 Meanwhile, the layout of the P45 Platinum, though generally very good, doesn’t exhibit the build quality or premium feel for which we look. The Northbridge cooler is retained by a couple of screws where three or four would seem more appropriate, while the other coolers are secured with plastic pop-pins.


We did, however, like the wide spacing of the two graphics slots as you can be sure that even the largest graphics cards will have space for airflow, while locations of the USB ports on the I/O panel also make life easier. On the other hand the two rubber micro buttons for the Power and Reset aren’t clearly labelled and are a touch fiddly, while the Clear CMOS button on the I/O panel is easy to hit in error. 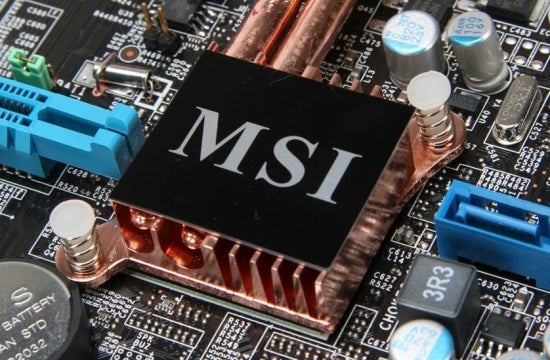 In short, the major elements are all bang on the money, but there are a few minor details that cause annoyance.


Pricing is a bit vague as we only have an SRP for the MSI as it won’t launch for another week or so, but provided it sells for the expected £130 it offers pretty good value for money given the pricing and features. And, were the price to fall any further than that, this board would probably be worthy of a recommendation. 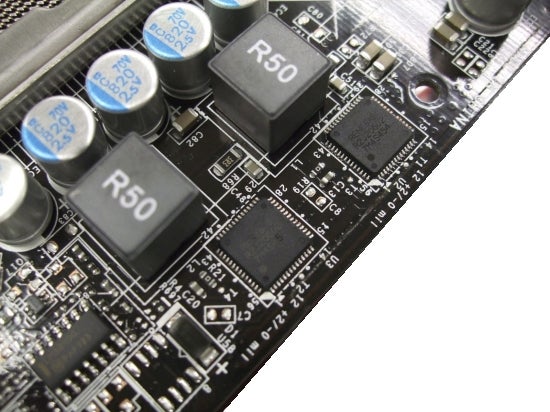 
This is the first P45 motherboard that we’ve reviewed and it is very promising. Given its similarities to the P35 chipset it’s not a nailed purchase for those going with a single GPU configuration, but if you’re planning on running ATi CrossFire graphics it offers superior performance at a reasonable price. 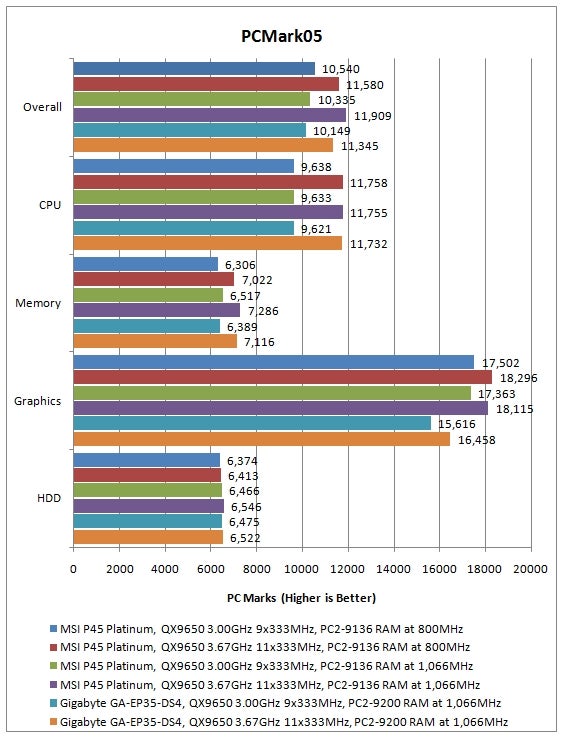 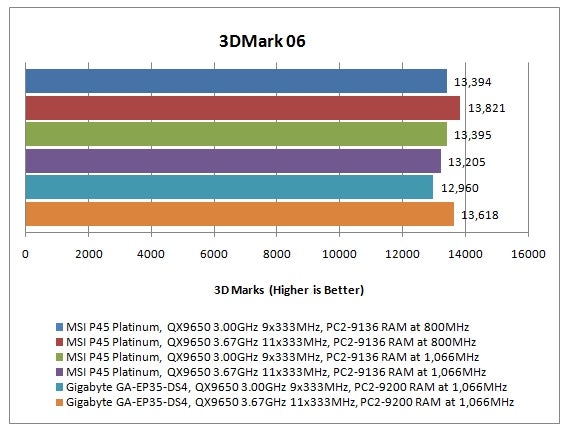 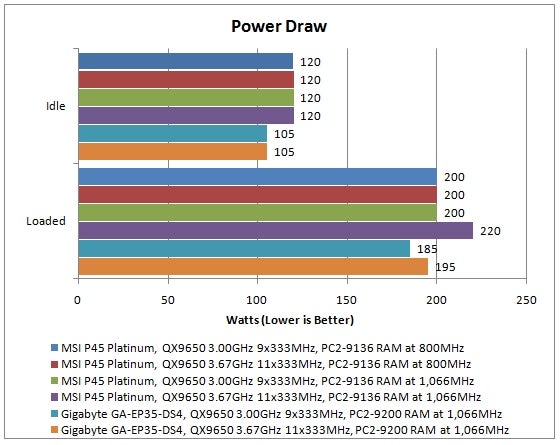