Amidst the prevalence and success of MSI’s Wind netbook, which has graced our pages regularly and in various incarnations, it’s sometimes difficult to remember the company also does some very interesting notebooks. Today we’re taking a look at the EX620, a 16in entertainment notebook that on paper seems to have it all: an Intel Core 2 Duo CPU, discrete ATI video card, Blu-ray drive, Dolby Home Theater audio and a speaker system supported by an inbuilt subwoofer. 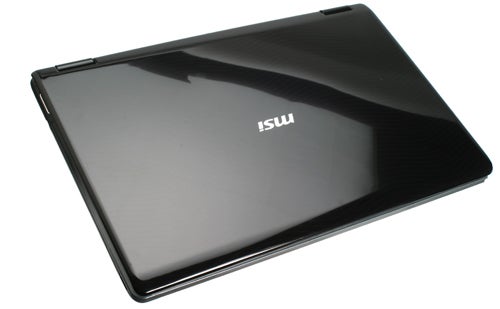 First impressions are certainly good, starting off with the above average bundle. Aside from the usual manuals, disks and common enough cleaning cloth, there are two more unusual additions: a laptop mouse and carrying bag. Of course, these might not be that useful for people who have perfectly decent ones already, but for everyone else, let’s find out what they’re like. 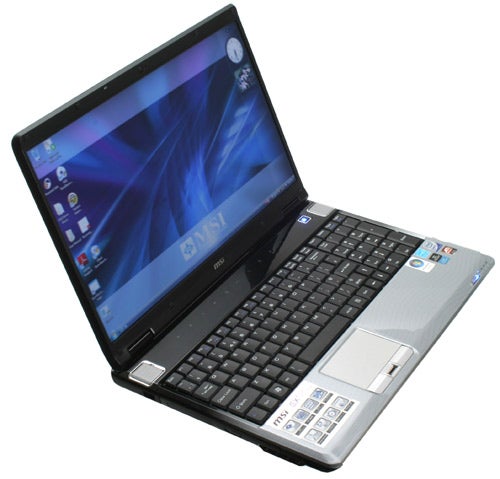 Initially, the ambidextrous optical mouse might look like a Dell rodent, but thankfully it doesn’t feel or handle like one. It’s quite small and not the most comfortable for bigger hands, but either way beats many bundled mice in that it does the basics and does them right. It’s ergonomically curved and its black and grey colour scheme matches the notebook nicely. It is very light, its two buttons give a positive click, the rubberized scroll-wheel has notched feedback and it slides along smoothly on four Teflon feet. 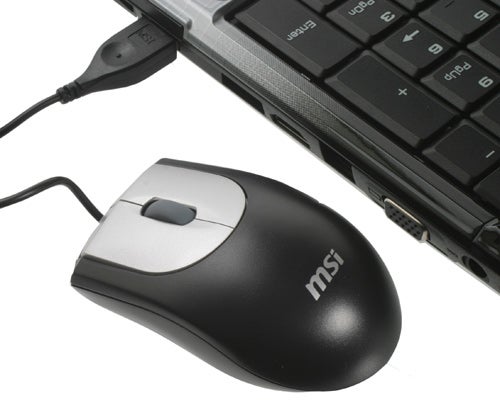 The plain black nylon carrying bag is also better than expected. It has nine pockets and compartments, including three zipped ones and a mesh zipped side-pocket for a bottle or phone. There is some padding to protect your notebook and both the bag’s handles and carrying strap pad are covered in fake leather. Our only complaint is that a remote would have perhaps been a more welcome addition than either of the above for what is, after all, a multimedia and entertainment notebook. 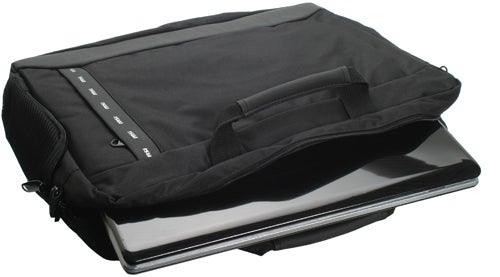 Getting onto the notebook itself, the lid is the usual glossy black fingerprint magnet but like competing multimedia notebooks from HP and until recently Toshiba, there is a pattern running across it. In this case, it’s a very subtle dark grey wave print that’s described in the marketing with some flowery language about “tranquillity” and the “comfort of nature”. Lyrical marketing aside, it’s a nice effect that gives the EX620 some individuality.

Opening up the EX620 notebook reveals a reasonable-looking interior. Those who are annoyed by glossy bezels will be pleased to hear MSI has kept it a matte black. This does change to glossy for the base, including the palm-rests. However, halfway past the keyboard the finish transitions smoothly from plain black to grey with the same wave pattern as the lid. This light-grey finish does a good job of hiding fingerprints, meaning the palm-rests here require far less maintenance than on most glossy examples. 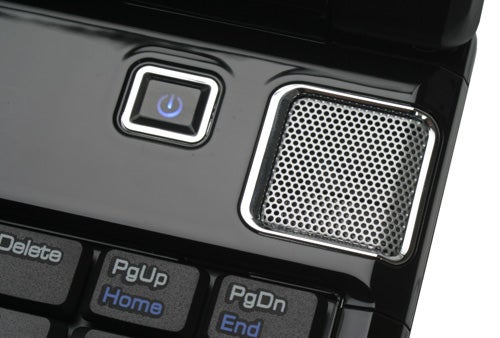 The solid piano-black part above the keyboard is broken up nicely by two square metal speaker grilles with chrome surrounds and a blue-backlit power button in a similar surround. This is also where you’ll find the almost inevitable selection of touch-sensitive shortcuts and multimedia controls. Thankfully, these are incredibly responsive and unlike most implementations will recognise quick successive presses. On the downside fingerprints are very visible here and firm presses make the entire section flex.


Aside from stop, play and track selection, this touch panel can activate Cinema Pro mode (adjusting screen colours and activating the Dolby Sound); switch between a broad selection of usage modes (such as Gaming, Office, Presentation, Movie and Turbo Battery modes which affect screen brightness and other factors); turn the webcam, Wi-Fi and Bluetooth on or off; and finally, a button you can assign to opening any program you wish. This is a very nice feature which you rarely see and we wish more manufacturers would implement it. 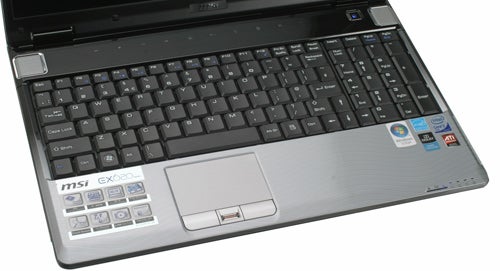 Unfortunately, the keyboard is a disappointment. In terms of layout, the Fn key is situated to the outside of Ctrl, while the Enter key is half-height like a US configuration and the ” key is located between Alt and the spacebar.,Finally, although there is a full number pad on hand, the zero is pushed over to reside under the two by the cursor keys. This could easily have been avoided; for an example of how to do it right one need only look at the HP HDX16 we reviewed recently.


What would otherwise have been good feedback is also marred by an inordinate amount of flex. Despite all the space the 16in form factor provides, MSI still hasn’t found a way to include dedicated Home and End keys. 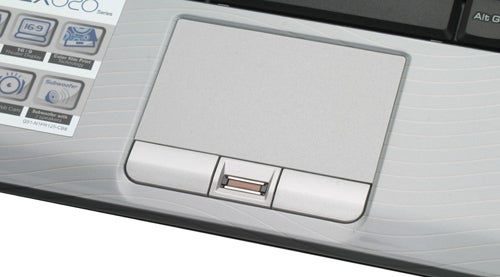 Thankfully, the touchpad is a lot better. Though in terms of design its paleness doesn’t match with the darker grey around it, its textured surface is nice to use – as are the large buttons that provide a positive click. Nestled between them is a fingerprint scanner for the security-conscious. To the right of the touchpad reside the blue-backlit activity icons, three of which (wireless, battery and sleep-state) are visible with the EX620 closed.

There’s nothing missing on the connectivity front. On the left you’ll find a modem port, a single USB port and a Blu-ray drive. Audio connectivity is where the MSI truly stands out though, as it’s one of the few notebooks we’ve come across offering three 3.5mm audio jacks, thus supporting full 7.1 channel analogue audio. Considering many cheaper surround sound speaker systems still use this rather than digital audio, it will doubtless be an attractive option for some potential buyers.

At the notebook’s front there’s an IR sensor, while the back offers only another USB port and a lock slot. To the right is where most of the EX620’s connectivity resides. Here we have another two USB ports, a Gigabit Ethernet port, the power socket and VGA as well as HDMI video outputs. There’s also a TV-antenna port, though a tuner is optional and not included in this configuration. As usual, you’ll also find a memory card reader and 54mm ExpressCard slot.


Now let’s take a look at what makes the EX620 tick. MSI has used the slightly long-in-the-tooth Intel T5800 Core 2 Duo processor running at a modest 2.0GHz, but this is no bad thing as it gives plenty of performance for most users while allowing the company to invest more in other components and keep the price down.

The only other sign of possible skimping is the 32-bit version of Windows Vista rather than 64-bit, which means it can’t utilize the full 4GB of DDR2 RAM included. Aside from this you get plenty of hard drive storage; 320GB of it in fact. The highlight of the internals is the ATI Mobility Radeon HD 3470 discrete graphics chipset with 256MB of RAM, which delivered a playable 24fps at Medium Quality in TrackMania Nations Forever at the screen’s native 1,366 x 768 resolution. Of course, the MSI is still no gaming machine, but will run a few more titles at low quality than notebooks with Intel integrated graphics while also handling some of the processing during Blu-ray playback. Other bits worth a mention are a 2.0 megapixel webcam, Wi-Fi up to Draft-N and Bluetooth 2.0. 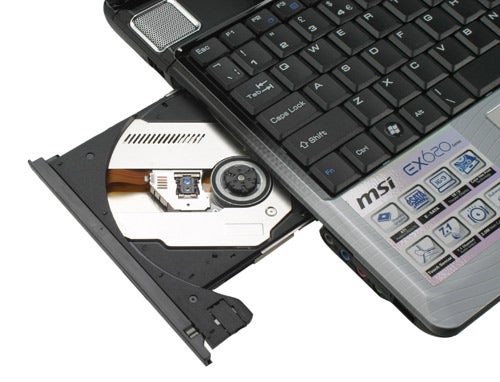 Unfortunately, the EX620’s 16in screen won’t show off the Blu-ray drive’s 1080p capabilities, but its lower HD Ready resolution is something most 16in notebooks in its class have in common and of course it does have a film-friendly 16:9 aspect ratio. As to the screen’s quality, it’s a bit of a mixed bag. On the negatives side, the glossy coating results in a wealth of reflections when there are ambient light-sources present. Viewing angles are also not the best and the panel gave an average performance in our grey-scale test, failing to distinguish between the tones at the extreme ends of the scale.

In the positives column, there is no sign of banding or backlight bleed – the latter being something manufacturers are finally getting consistently right. The reflective coating can also make colours appear with plenty of verve, if you’re at the ideal viewing angle. As with most notebook displays, it will do an adequate job for films and other entertainment, but the more critical and those who require colour accuracy should consider alternatives like Dell’s amazing RGB-backlit Studio XPS 16.

In audio, the dedicated subwoofer found on the notebook’s underside does make its presence felt. The result is that the EX620 produces more bass than most, but unfortunately this comes at the cost of clarity, since even trebles tend to come across slightly muddy. We were honestly hoping for better, but at least you’ll be able to get the full 7.1 experience by hooking up external speakers and Dolby Home Theatre technology means you benefit from things such as Dolby Headphone. 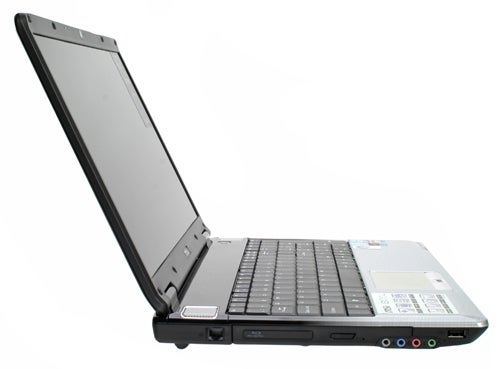 Battery life from the six-cell 4,400mAh unit included with this EX620 configuration is reasonable compared to other 16in multimedia notebooks we’ve looked at, managing two hours and 43 minutes in the non-intensive reader test. So far then, we have a notebook that’s fairly average in most respects, though it’s stuffed with every feature a multimedia notebook could want. It’s when one notices the relatively low price of £690 that things get really interesting, though.


With the HP HDX16-1005EA having shot up in price to over £1,000 since our review, it can’t be considered an alternative. The award-winning Acer Aspire 6935G, on the other hand, has actually come down to only £784, so let’s see how they compare. 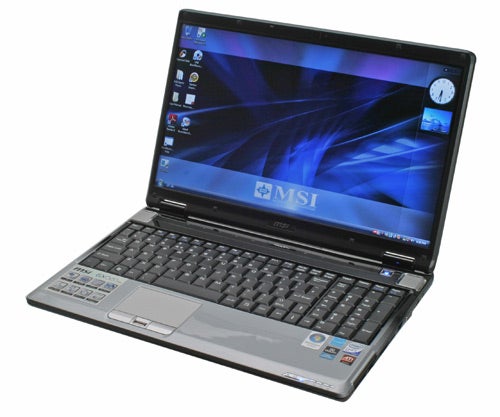 Both notebooks offer 16in 16:9 screens and are Blu-ray capable, but the Acer offers a good remote instead of a mouse and bag. We prefer the look of the Acer, it sports a better keyboard layout (though no number pad) and it wins on specifications too, including a TV Tuner and slightly better graphics card. Whether this is worth nearly £100 extra really depends on how important these points are for you and whether the current low pricing continues.


MSI has gone to town on its EX620 multimedia notebook in terms of features and has made it very affordable into the bargain. This makes it a sensible option for those looking for good all-rounder, but little flaws like the awkward keyboard layout and only average styling, screen and speakers are worth bearing in mind before you buy.