It barely seems any time at all has passed since I reviewed Motorola’s bendy slider the Z10, and here I am looking at another new handset from the beleaguered manufacturer.


This time the phone in question is the MOTO ROKR E8. Now, I am not going to go on again about Moto’s seemingly never-ending desire for four letter CAPITALISED handset names. (RIZR, RAZR, KRZR, SLVR, PEBL, ‘nuff said). 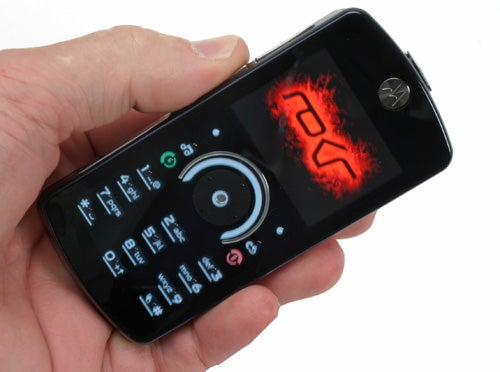 Instead I will make a quick comment on the ROKR line. The ROKR E8 picks up a line that started with the dreadful original ROKR, which was meant to revolutionise music phones. Developed along with Apple to support iTunes it had a 100 song limit even when you used the microSD card slot to expand the built in memory. Huh? You say. Well, it was a disaster of a mobile phone, and in a way it is a surprise that Moto wants to keep the ROKR name alive. Still, here we have the ROKR E8. It has 2GB of built in memory, which is nice, and a microSD card slot for adding more, which is nicer. 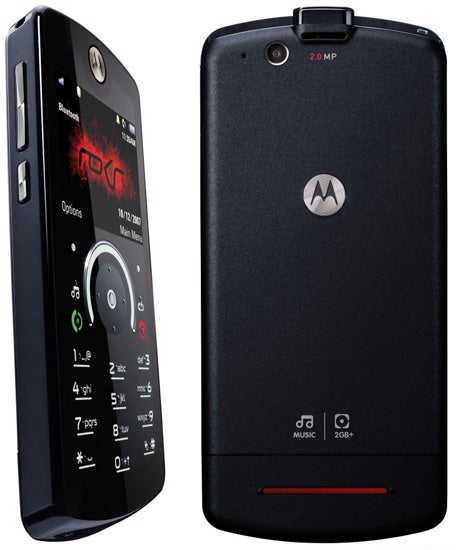 It is a quad-band GSM handset with GPRS and EDGE. The absence of 3G is an irritation if you are keen on a music mobile that can also do the speedy Internet thing for music downloading or any other activity such as the two-way video calling thing.


The size of this phone may also be a problem. Its 53mm of width, 10.6mm of thickness and 100g of weight are all acceptable enough, but it is very tall at 115mm. It felt rather chunky in my own smallish hands as a result, and my pockets grumbled at having to accommodate it too.


Given the available front fascia size the weeny screen is a bit disappointing. It is not the usual tall portrait-orientated screen typical of most mobile phones, but is instead wide and measures 2-inches diagonally. Its 262 thousand colours and 320 x 240 pixels are clear and sharp enough, but it just looks lost in the vastness of the front fascia.

None of these things are going to matter if you are drawn to the RORK E8’s key feature, though and this is what Motorola calls ModeShift. Basically this is all about giving the phone entirely different user interfaces for music listening, working with the camera and making phone calls. 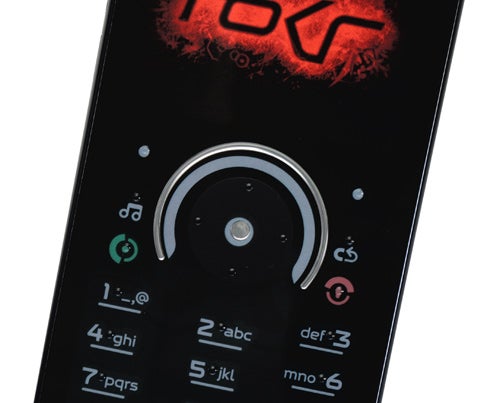 
Switch the phone on and up pops a number pad, Call and End keys, softmenu keys, a music key and a back/cancel key. The key pad area is flat and is actually a haptic touchpad – Motorola’s first. You use the number pad to make calls in the usual way, and as you hit at buttons you get a little vibrating response and a sort of faint chinking noise. 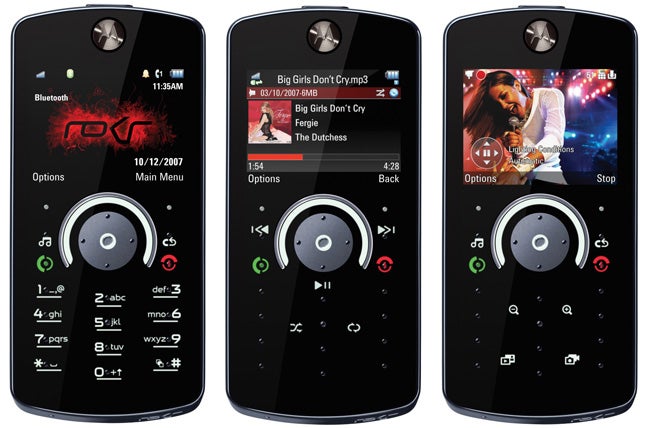 The fun starts when you are ready for tunes. You hit the music button and something weird happens. The pattern of keys changes entirely and you no longer have a number pad at your fingertips. Instead there are back, forwards, pause/play, shuffle and repeat keys alongside the Call, End and softmenu keys.


Switch into camera mode and four keys pop up where the number pad would otherwise be, offering zoom in, zoom out, video view/edit and camera/video toggle.


The system is certainly innovative, and I had no trouble using it. I’m not convinced about how well it would work in the long term, though. True, it does make getting around the phone fast and easy, but I like my music and camera control keys to be accessible all the time, not just when I call them up. And that goes particularly for the former.

There is another innovation in the shape of the FastScroll touchwheel. This relates to that two-thirds frame of the navigation button I mentioned earlier. Run a finger or thumb around this clockwise or anti-clockwise to scroll and keep touching the end of the area to keep scrolling. The faster you run your finger along the FastScroll area the faster you scroll. You can use it to move through lists such as contacts, images, music and so on. It works, but I found it a bit of a fiddle to get used to.

There is a side-mounted Hold button that locks out the keys, and, joy of joys, the headset connector is 3.5mm so you can replace Motorola’s provided headgear with your own choice very easily.


It is irritating that a standard mini USB connector won’t charge the phone, though. Motorola prefers the slightly smaller microUSB type, which tends to be less common, so if you leave your charger behind, your mates probably couldn’t lend you theirs. This also doubles as the PC connector. 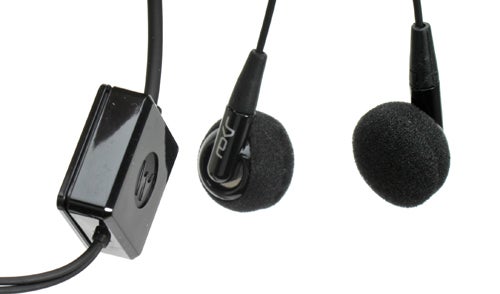 Photographers might want to give this phone a wide berth, too. Its 2-megapixel camera is way below par. There is no flash or autofocus and all my test shots were disappointing. Indoors, under standard lighting, the coloured dish has poor colour reproduction, while outdoors my standard photo of the chair fails to capture the white tone or detail well. The flowers really are beautifully striking, but the camera fails to bother with any kind of petal detail, turning them into indistinct daubs of pink. Other features of this handset include an HTML Web browser, FM radio, voice recorder, calendar, mobile email, alarm clock, world clock, calculator and a couple of games. 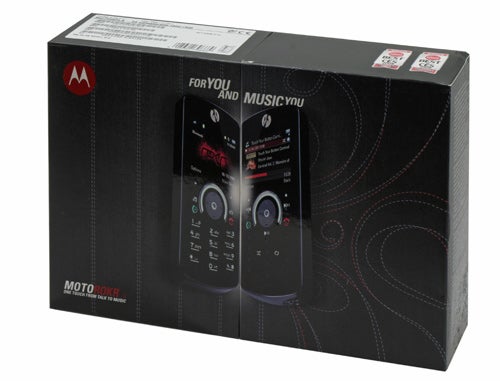 
This is a chunky phone that my pockets loathed. The haptic changing touchpad is a clever idea but not, in itself, enough to make me want to own this mobile. The camera also lets things down, as does the lack of 3G. This is a real pity. I believe Motorola can do innovation, but the company just seems to fall at the final hurdle. 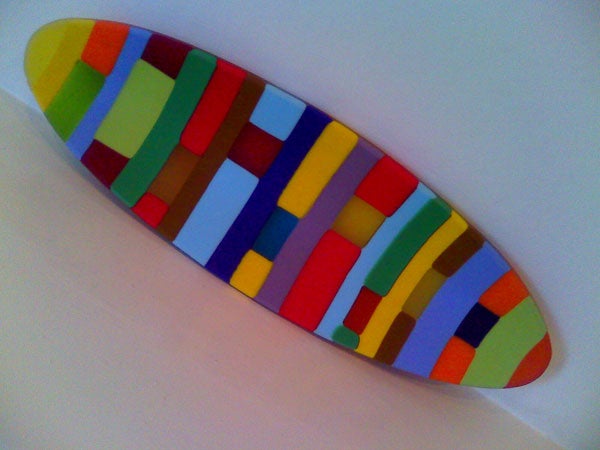 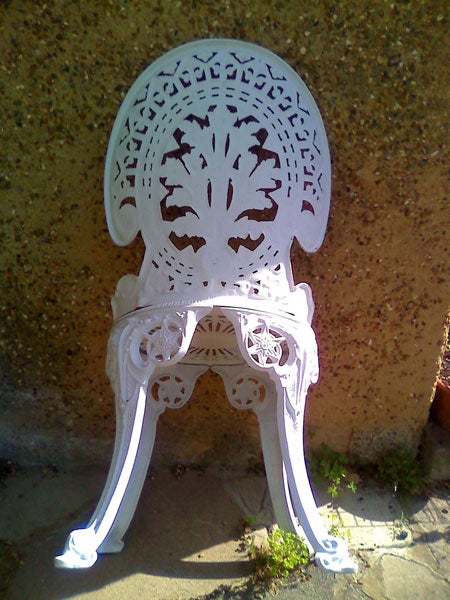 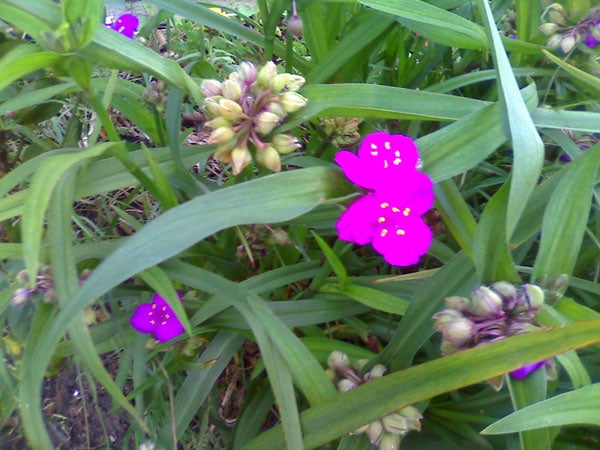