I’ve always been a fan of Blackberry-style handsets with their ‘always-on’ keyboards. Being able to tap out emails fast without having to slide out an awkward hardware keyboard, or pull out a fiddly stylus and tap out text, one painful letter at a time, on a tiny touchscreen keyboard is a very big bonus.


The trouble is very few manufacturers – specifically those producing the Windows Mobile variants – have been able to pull off this style of handset with any degree of success. The keys on such handsets tend to be small and fiddly, as with Samsung’s i600 handset; or the handsets themselves simply too large and unwieldy as a result of accommodating the full width QWERTY layout. Dialling numbers isn’t easy either with the number keys typically embedded in the alphabetic layout and difficult to make out. 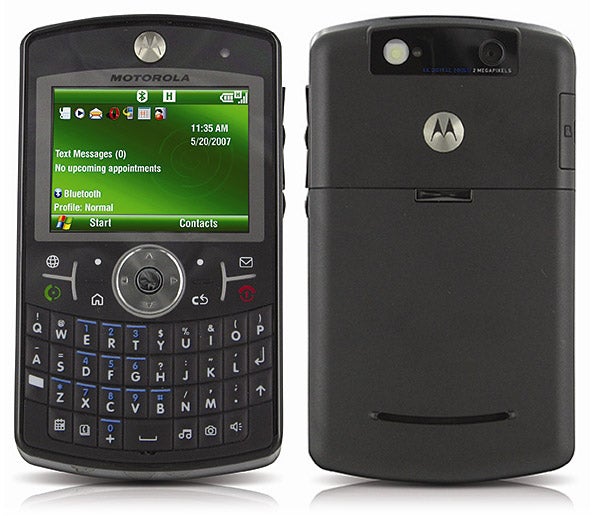 The superbly slim and light i-Mate Jama 201 made a good stab at the format when I reviewed it at the turn of the year, as did Samsung’s recent i780, but each had usability flaws. The Motorola Q 9h, on the other hand, has none, effortlessly sweeping aside all the above concerns. In fact it’s the very first Windows Mobile smartphone to take on Blackberry’s best handsets at their own game and beat them in the areas where it matters most.


The main reason for this is the Q 9h’s superb keyboard. The Blackberry 8800 series of phones has had the monopoly on good QWERTY keyboard design up until this point, but this Motorola’s is even better. The rounded, rubbery keys are simply superb: they offer positive feedback, are just curved enough to offer a decent amount of key-to-key separation so you don’t constantly wind up hitting the wrong key when typing, and the lettering and size of the keys is such that you don’t have to squint to see if you’re pressing the right one or not.

It’s so good that I wrote the first 200 words of this very review on it while sitting on the sofa watching TV without cursing or swearing once – and it only took a few minutes of my time. In fact, next to the slide-out keyboard on the Samsung F700, I’d say this is the best hardware keyboard I’ve used on any phone.


Unfortunately, a phone with such a superb QWERTY thumb-board is never going to be as compact as, for instance, the Asus P320 PDA phone I reviewed recently – you simply can’t make a usable keyboard much smaller than this – but Motorola has done its level best with the design to ensure it’s no more bulky or ugly than it needs to be.


It’s thinner than the Blackberry 8820, for instance, at 11.8mm to the Blackberry’s 14.5mm, and at 134g it matches it in weight. It looks a lot nicer too, to my mind, with its rhomboid side-on profile and cool blue strip-lights surrounding the button cluster atop of the keyboard. The main five-way navigation key isn’t as slick as the Blackberry devices’ scrolling pearl, however, but at least it doesn’t have the usability issues of the Samsung i780’s innovative but problematic trackpad control.

Also unlike Samsung’s new i780, Motorola has stuck with the non-touchscreen version of Windows Mobile 6 (Standard) for the Q 9h. It’s not pretty to look at, but it still does the job reasonably well. More importantly, Motorola has included a series of very useful extras with the handset. I’m not too sure that McAfee’s mobile virus scan product is a strictly necessary inclusion. Leaving it in Live Scan mode also drains the battery quicker than you can say, ”but no major threats have materialised yet targeting Windows Mobile”, but it offers peace of mind if nothing else. And even if you turn Live Scan off, it will scan email as it comes in and you can set it to carry out a daily or weekly scan instead.

Instead of the bizarrely hobbled version of Office Mobile that you usually get with Windows Mobile Standard devices – where you can edit documents but not create new ones – the Q 9h includes a copy of DataViz’s superlative Documents To Go. In addition to allowing document creation, this is actually a much more powerful mobile office suite than Office Mobile, and it’s a big improvement over the view-only software you get with the Blackberry phones too. The only downside is that it doesn’t support the .docx documents and other Office 2008 formats.


There’s also the full version of Opera Mobile included – I actually prefer the free Opera Mini 4.1, but this is still better than the ineffectual Microsoft mobile browser and offers full end-to-end encryption for online shopping, banking and the like. And there’s a whole host of other utilities to add to Windows Mobile’s usual set too, including a folder full of Bluetooth tools, a VPN application and voice recognition/dialling software. 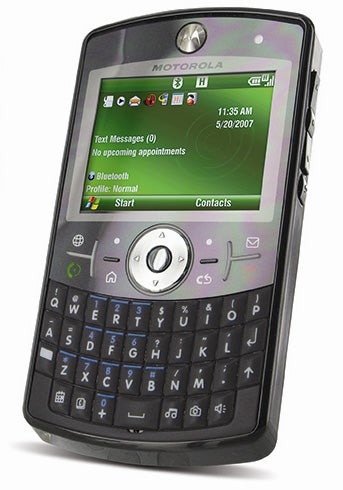 In terms of mobile data, the Q 9h phone is no slouch. It’s quicker than the Blackberry handsets with HSDPA speeds of 3.6Mbit/sec supported, alongside GPRS and EDGE and quad-band phone capability, plus it has Bluetooth 2.0. But at only £245 unlocked, something’s going to have to give, and in the case of the Q 9h it’s the rest of the specification.


There’s no Wi-Fi capability, for instance, and no GPS. Disappointingly the phone has only a 2-megapixel camera and, despite its fast HSDPA data, no accompanying VGA video call camera either. The screen is a small 2.4in 320 x 240 one, despite the wide chassis, and the processor and memory complement – a 200MHz ARM chip and 64MB RAM – don’t look particularly generous.


It’s not all bad news, though, and the Q 9h fights back with an ingenious sensor on the front that dims the screen to an appropriate level depending on the ambient light. And, despite the humble core components, Windows Mobile doesn’t seem to suffer at all – it’s a very nippy, responsive phone to use.


In short, I like the Motorola Q 9h. It’s clearly a budget handset and doesn’t have the full armoury of smartphone features. But Motorola has cut the corners in all the right places and added extra value where it counts too. Most importantly it’s a highly usable email tool with a brilliant keyboard and some genuinely useful software to go with it. It looks as if Blackberry finally has a genuine challenger.