The Motorola G8 Power Lite retains a massive battery, but jettisons specs in other key areas, with the screen, camera, and display included. It's not a bad phone, but it doesn't hit that same value-for-money spot as its slightly pricier sibling.

The G8 Power Lite is a cheaper version of the Motorola G8 Power, which offers the same massive battery but lowers some other f the other specifications as well as the price for a more affordable overall purchase.

So with that in mind, is it more prudent to go for this device rather than the G8 Power? Do you get all the benefits for a cheaper price? Or are there a few too many compromises? Read our review to find out.

The G8 Power Lite features a blend of colours on the back panel that give it a subtle yet attractive look – in this regard it actually outshines some of the more expensive models in the series.

On our review sample, the bright blue at the bottom soon melds into a darker purplish tint. There’s a speaker visible at the bottom of the phone, while nearer the top you’ll find the triple camera module plus the fingerprint sensor. The matte texture of the rear also makes the device less likely to pick up fingerprints or unsightly smears compared to its glossy rivals. 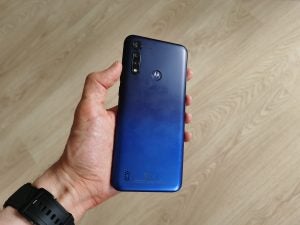 There’s a fairly subtle teardrop notch at the top of the screen to house the selfie camera, and bezels run round the edge of the display, along with a relatively significant chin at the bottom.

In more functional terms, it offers a 3.5mm headphone jack and a Micro SD slot – but the port is Micro-USB rather than USB-C, which feels like a real anachronism these days.

Overall, the design looks good and is functional – but we’d have strongly preferred a USB-C cable for greater compatibility and interchangeability with other devices.

The screen measures 6.5-inches and has a resolution of 720 x 1600. It’s a good size, and colours generally look bright and appealing. 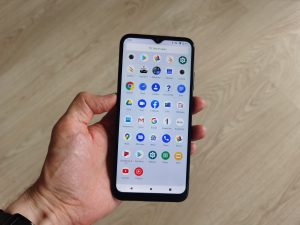 However, the resolution is a little low, so you’ll notice that edges of shapes and letters aren’t completely clear-cut. This detracts from an immersive experience, but it’s still good enough to use for basic needs such as communication. But if you want to watch a lot of videos or even enjoy reading articles on your phone, you might want a slightly crisper display.

But what does that mean in terms of real-world performance?

Scrolling through apps can be a little juddery, but I didn’t find that apps would shutdown on me, and limited multi-tasking didn’t present any major problems either. But games had to be played on low graphics settings, so if you’re a keen gamer you might want to shell out a bit more a more capable handset.

The battery is a key selling point of this phone. A capacity of 5000mAh wouldn’t necessarily be expected in a top-flight flagship phone, let alone a cut-price budget model like this, so it’s exceptional to see that specification.

In terms of real world usage, I found that the battery dropped down to 95% from full after one hour of video streaming, and after three hours it had dropped down to 81%. That’s a good record, but given the massive battery combined with the undemanding display, I might have expected an even better performance; bear in mind that the G8 Power was down to 97% after an hour of video streaming.

When it comes to recharging this phone lags behind the snappier modern phones, taking approximately two hours to charge up from 20% to full battery. That’s exactly the same as we recorded with the G8 Power, but it’s almost half as slow as the standard Motorola G8.

Overall the battery is still a positive point for this phone, without a doubt; but it doesn’t deliver the same performance as the standard G8 Power, despite the same number on the specs sheet, and it does take a while to charge back up again.

The G8 Power Lite has a triple camera, which certainly sounds impressive, but in reality there’s not as much versatility as you might have hoped for. The set-up is led by a 16-megapixel wide camera, but it’s complemented by a 2-megapixel macro camera and a 2-megapixel depth sensor, rather than more handy options such as an ultrawide or telephoto lens. Nonetheless, it’s still an interesting package for a budget phone. 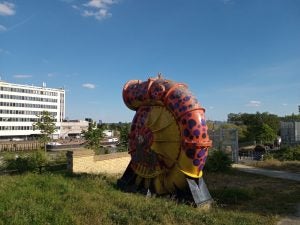 The main camera is serviceable but not great. The detail is never stunning and sometime there are issues with finding the right balance between light and shade, but the images are at least fairly clear. 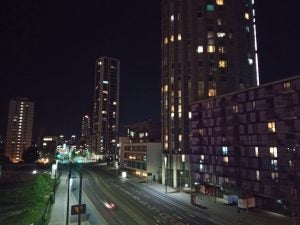 But when you’re taking snaps in the evening, the camera’s flaws are only accentuated. In low-light scenarios, images look very blurry and highlights are blown out – a huge amount of detail is lost, to the extent that these images are practically unusable. 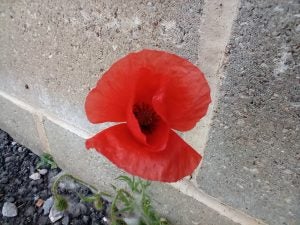 The macro camera, designed for shooting extreme close-ups, isn’t exactly bad, but neither does it do enough justify its existence on top of the existing cameras. It’s a rare moment when I find the need to use a dedicated macro camera over the standard wide angle shooter, and the performance of this snapper doesn’t do much to change my mind. 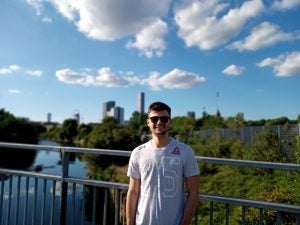 On a more positive note, I was relatively impressed with portrait mode on the G8 Power Lite; the practical effect neatly cuts around the subject for the eye-popping bokeh effect.

Overall, the camera is serviceable in daylight conditions without being brilliant. But if you want to just snap quick pictures to remember something later then it will suffice; it’s nice to have a decent portrait mode thrown into the mix, but the macro camera doesn’t do much of value.

Should I buy the Motorola G8 Power Lite?

The Motorola G8 Power Lite is in a tough place with many best cheap phones around, If you have £150 as your maximum limit, then it’s not necessarily a bad choice – but if you fork out a little for cash for a Xiaomi Redmi Note 7 or a Motorola G8 Power, then you’re likely to have a better all-round experience from your phone.

This is a fairly basic phone, that’s likely to meet your expectations for the price. The battery is large, though not as enduring as we’d expected, and there’s nothing else that it particularly excels with – so think carefully as to whether it’s worth splashing out just a little for cash for a phone with superior cameras, performance, and screen that gives so much more enjoyment to your day-to-day tech usage.

But if you use your phone for fairly basic activities and you’d like a reliable battery, then this should do the job.