All too infrequently do we see true innovation in the technology industry. More often than not the vast majority of the products we see are variations on a theme. That’s why when something like Motorola’s Flipout comes along, even if it doesn’t revolutionise the world around us, we have to applaud the company for trying.

The Flipout is a slider smartphone running Google’s Android operating system (OS) but rather than a traditional up and down slider, it uses a rotating motion to reveal its keyboard. The design allows the phone to be very square, making for a large keyboard while maintaining a small overall footprint, with the compromise being a small screen. The question is, does it work?


The design is an intriguing combination of utilitarian and sleek. The square stance (67 x 67mm) and thicker than average bulk (17mm) give it the former characteristics while a sheer glass front, brushed metal back to the screen, and some coloured backplates represent the latter. It’s definitely an acquired look overall but we rather like it. 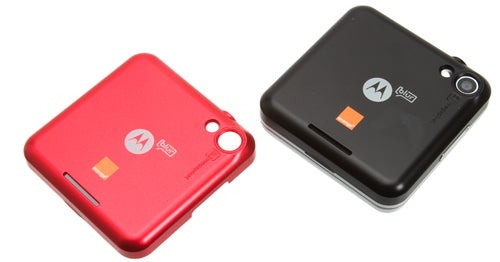 As we’ve come to expect from Motorola, build quality is superb with both the aforementioned glass and metal giving out a sturdy impression along with the plastic build of the main body showing no signs of creaking of flexing. The single hinge around which the phone slides also feels immensely strong with no give whatsoever. It also slides smoothly and snaps into place once you pass a certain point, making it really easy to operate. Although there’s a bit of a learning curve to opening the device and not have it fly out your hand, you soon get the hang of it.


Underneath the screen are the trio of standard navigation buttons you get on Android devices; Menu, Home and Back. The rest of the phone’s features are fairly standard as well with a headphone jack up top (if a phone that opens in the manner of this one can really have a top) along with the power button, a volume control on the left, microUSB on the right and a camera on the back.

The camera is rather poor though, with it capturing only 3.1-megapixels, lacking autofocus and a flash. However, it does at least have a self portrait mirror, which is an oft-overlooked useful extra.

Under the battery cover, as well as the 1130mAh battery there’s a microSD slot for adding extra storage. There’s a 2GB card included, with just 150MB of onboard storage, so you’ll probably want to grab a larger card if you plan on filling your phone with music, videos, photos and apps.

As already hinted at, the screen on this phone isn’t its forte with it measuring just 2.8in and packing in a resolution of 320 x 240 pixels. As such this isn’t the sort of phone you’ll likely want to spend hours gaming or watching videos on – playing Angry Birds, for instance, resulted in your hardly being able to see what you were doing. However, within the confines of a small screen, it holds up reasonably well. It’s an LCD panel, so doesn’t have quite the level of contrast, colour saturation or limitless viewing angles of an AMOLED display but it’s reasonably sharp, produces natural colours and is generally easy on the eye, and ultimately is par for the course on these smaller smartphones.

With the phone closed you can operate it completely by touchscreen, which works very well. It supports multi-touch for performing gestures, such as pinch-to-zoom, and thanks to the glass finish feels great underneath your fingers. For most uses the screen size doesn’t feel overly limiting, though inevitably it does mean a degree of extra scrolling and zooming. Probably where this limitation is felt most acutely, is the onscreen keyboard. It’s absolutely fine in terms of layout and responsiveness but it’s just a bit small. Of course, this is where the slideout keyboard comes in.


The physical keyboard on this phone is, if memory serves, unique in its proportions. The square handset design means that the keys can be much taller than normal, which combined with ample width and a rough domed finish makes them very easy to distinguish and type at speed on. The layout is also excellent so with just a few moments practice you should be up to speed, and with full backlighting there should be no problems in the dark. In this day and age, the directional-pad is a bit of a throwback but it’s a sometimes useful addition that takes nothing away from the handset. 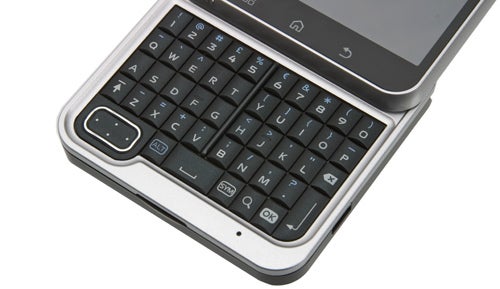 One consequence of the phone’s landscape oriented screen is the slightly peculiar interface layout. Running Android 2.1, you’d expect to see the App Launcher, dialler, and contacts icons run along the bottom of the screen but instead they’re in a column on the right. While slightly odd, this does make sense as it allows for a more usable space on the home screen to fill with widgets and shortcuts. 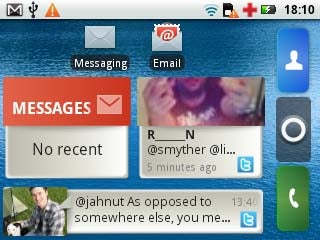 Talking of widgets, Motorola has fairly heavily tweaked the look and feel of the phone with its Motoblur interface. This includes a load of social networking integration which can be accessed through a number of widgets. You can have Facebook feeds or Twitter messages beamed straight to your desktop and tapping them will take you through to an interface that lets you reply or post a comment. 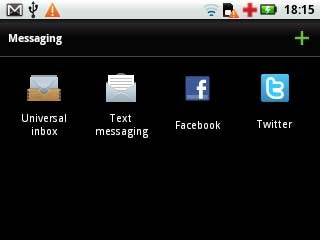 General social networking messaging is integrated into the Messaging app as well, along with texts and emails, so you have a one stop shop for viewing all your goings on (though as usual the Gmail account is kept separate). As well as messaging, there’s Happenings which brings together friend’s updates into one place. 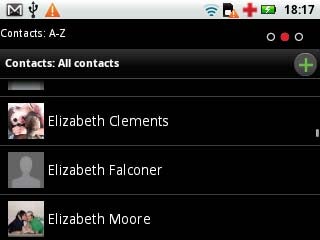 You also get all this information tied into the main contacts list, so you can tap on a friend’s picture and see what they’ve been up to and what you last said to each other on every form of messaging. It’s all easy to use and setup, with just a couple of usernames and passwords required.

Another Motorola tweak is the addition of the Phone Portal, which once setup with the included software lets you sync your phone’s content over Wi-Fi, which is a surprisingly liberating and useful ability. 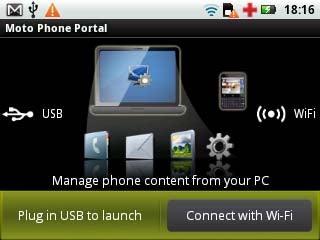 As well as Motorola’s tweaks the review sample we have has been tweaked by Orange, with a News feed and Orangemaps added. The former is a basic RSS reader while OrangeMaps, well, didn’t work. Having convinced itself it required the French version, it then proceeded to fail upon installation. What it would normally get you, though, is a fairly rudimentary mapping application that isn’t as nice to use as GoogleMaps but is useful for the fact is stores the maps locally so doesn’t require a data connection to download maps mid journey. 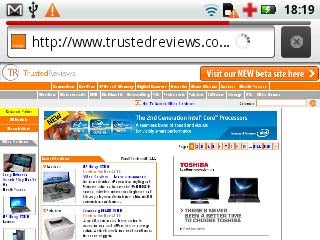 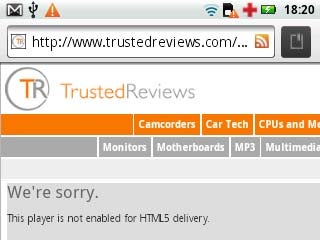 Other apps include the staples of GoogleMail (to find out where you’re meeting), the Google browser (to check if where you’re heading is any good), GoogleMaps (to check the whereabouts of said place), Google Navigation (to guide you on your way), Google Places (to show you where to refuel on the way) and Google Latitude (to tell your friends where you ended up). They all work as well as we’ve come to expect, though the GPS seemed rather slow to lock on.


GoogleTalk is on hand for instant messaging while QuickOffice lets you view and edit Office documents, so you can spend your spare moments productively rather than just playing games. Rounding things out for the included apps are perfectly capable versions of a Calculator, Alarm/Timer, Picture Viewer, Music Player and a Calendar. To add to the library of included apps, there’s access to the Android MarketPlace, which has just about every app you could imagine (though notably, the latest craze, Tiny Wings, isn’t on there. 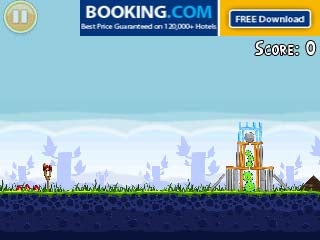 Performance of the handset is okay with most interface elements responding rapidly, and certainly not feeling too inhibiting. However, scrolling through long lists does result in a bit of stutter. This is down to a combination of the slightly older 2.1 version of Android that the phone is running, and its 600MHz processor, which trails the latest and greatest models packing 1GHz+ chips. Joining the CPU is healthy 512MB or RAM, which means you should seldom run out of space to run many apps at once.

Calling can only be undertaken with the phone open, which is understandable. However, call quality isn’t all that great with a slightly distant, tinny sound through the earpiece. Likewise, battery life is only okay with a couple of days being a stretch, especially if you keep any widgets on.


On paper, the Motorola Flipout shouldn’t work. Its rotating slideout keyboard design results in a small screen but not a particularly small phone, while its processor is a bit slow. Overall it smacks of a concept taken too far. However, Motorola has done the best it can with the idea, producing a phone that’s very well made, has a great keyboard and wants for little in the way of features. It’s also available for a great price. However, when push comes to shove, it doesn’t do enough well enough to standout from the crowd. 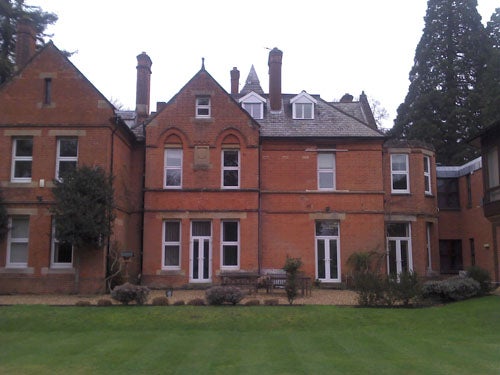 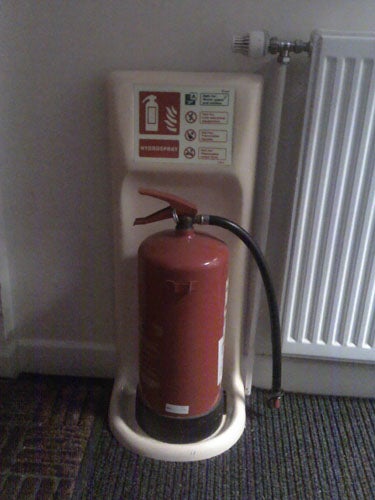