Impressive steam pressure and performance, but the Morphy Richards Saturn Steam 305000 has fussy buttons and a temperature display you can’t rely on.

What is the Morphy Richards Saturn Steam 305000?

The pump works alongside the Aeroglide soleplate to evenly distribute steam across the entire base through its 485 steam holes. This creates a cushioned effect as you iron, because the holes distribute the steam over a wider area of the soleplate.

Precision temperature and steam control mean that neither fluctuate during use. The steam can be set to be constantly on, and also heats fast due to the 2400W of power. The pump on the iron pushes steam deep into fabrics and enables you to iron multiple layers. Morphy Richards Saturn Steam also has a crease light that helps you to see what you’ve missed, especially on darker fabrics or round pockets and pleats. This helps give a professional finish to your ironing.

The Morphy Richards Saturn Steam has dual limescale protection, too: there’s a self-clean system, and a built-in anti-scale cartridge.

To fill the iron, you open the filler cap on its front and tilt the iron so that you can see when the “max” mark has been reached. As you plug in the iron, it will beep. You press the on-off/temperature decrease button to switch it on.

This button is part of a five-button display on top of the handle, and is on the top-left, marked with a downward-pointing triangle. The one-dot temperature setting indicator on the digital display just above the filler cap will light up when you do this, and flash until the temperature is reached. Then the display light will glow steadily and the iron will beep twice. For a higher temperature you press the top-right button on the five-button display, which is marked with an upward-pointing triangle. Successive pushes will light up successive temperatures and, in each case, the lights on the digital display will flash until the temperature is reached, when they’ll glow steadily. To lower the temperature, press the temperature decrease button. There are four settings: one dot, two dots, three dots and max.

To activate steam you make sure the soleplate is horizontal, and press the auto-steam button on the five-button display. Once switched on, the steam level in the Morphy Richards Saturn Steam is automatically adjusted to suit the selected temperature setting. For a boost of steam, you press the trigger found on the underside of the handle. For optimum steam, you shouldn’t press the trigger more than three times in close succession without resting it. 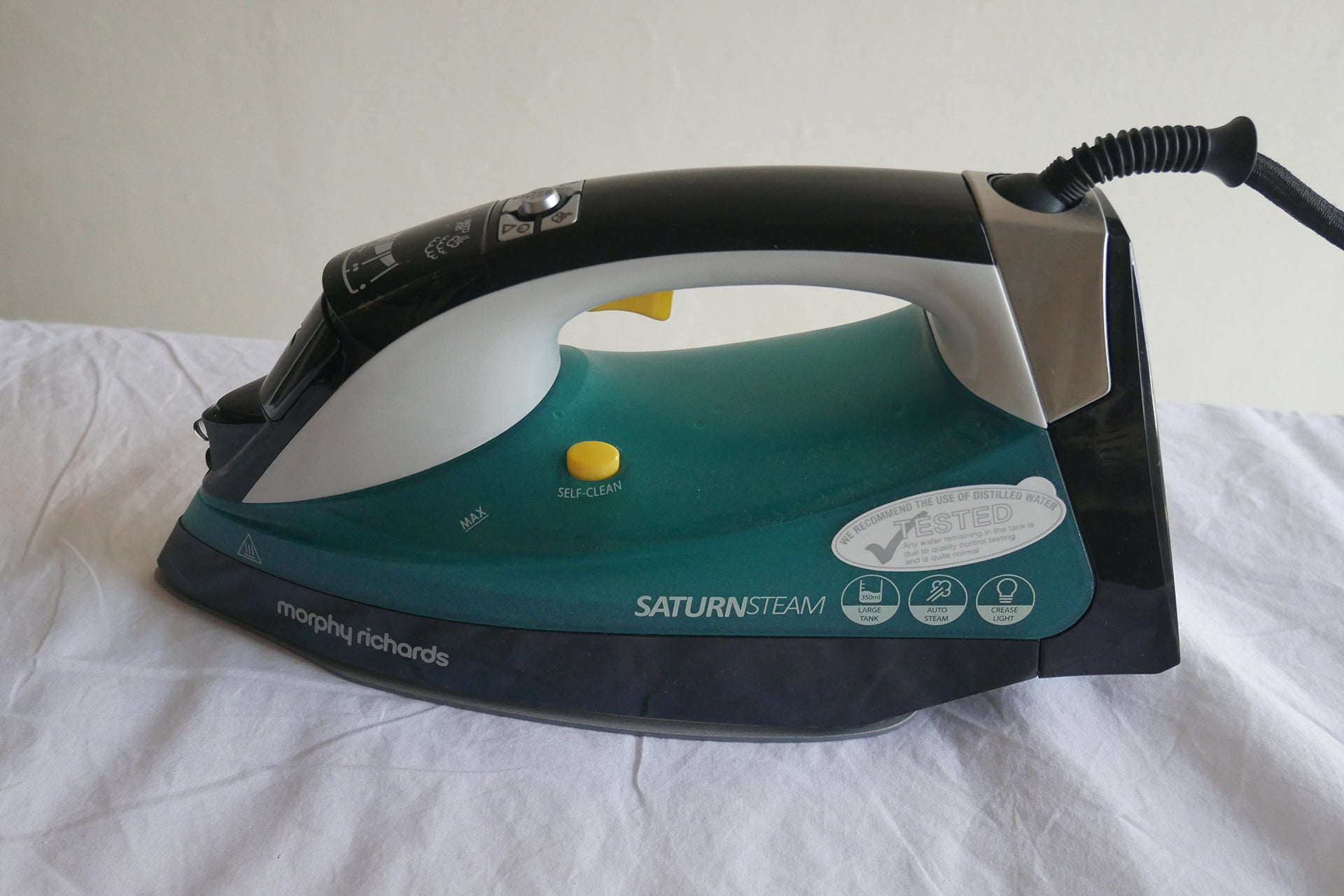 There’s a water-spray button in the centre of the five-button display (marked with a spray drawing). Press it and water will emerge out of the nozzle, just above the point of the iron.

If the iron isn’t moved for one minute while horizontal, or 8 minutes while upright on its heel, an indicator will flash on the bottom right of the digital display, the iron will beep, and it will then go into sleep mode.

To switch the Morphy Richards Saturn Steam off completely, you press and hold the on/off temperature increase button until all the indicators on the digital display switch off, after which you unplug the iron.

If the words “Self Clean” light up on the digital display mid-iron, it’s time to clean the iron. Half-fill it with water, set the temperature to “max”and, once it has heated up, press and hold the on/off temperature decrease button to switch off the iron. You disconnect it at the plug and hold it horizontally over a sink. Then you press and hold the Self Clean button, which is on the main body of the iron. Water will gush out of the steam holes. When it has all gone through, turn the iron on again to heat it and dry the tank. Then switch it off and let it cool down.

The Morphy Richards Saturn Steam has to be filled with a 50/50 mix of tap water and de-ionised or distilled water in hard-water areas. The water tank is dark green, which can make it difficult to see the fill level.

I found all the buttons quite fussy and complicated to use. Some people may not like the way the temperature is shown only in dot form, with no words on the digital display to explain that one dot means the heat is suitable for synthetics, two is for silk and wool, and so on.

I also found that it was too easy to switch things on by accident, especially if your fingers are as fat as mine, because so many of the controls are on the top of the handle. The crease light was one such button that I kept hitting whilst ironing.

The Morphy Richards Saturn Stream took a fast 20 seconds to heat to the “max” setting from cold. The different dot settings heated to 90ºC, 150ºC, 180ºC; “max” was 197ºC. Ironing on full steam, it took just over 30 minutes to empty the tank. Incidentally, you can tell when the tank is getting close to empty because the iron starts making a noise like a toy steam train.

I found that you couldn’t trust the indicator lights on the digital display, particularly if you were waiting for the iron to cool to a lower setting. I had been ironing on the three-point cotton setting, and I reduced the temperature to the one-dot setting and waited until the display stopped flashing and glowed steadily – this is supposed to indicate that the temperature has been successfully reached. When it did, I ironed a polyester scarf, and it instantly burned and glued itself to the soleplate.

I followed the instruction booklet’s advice about cleaning the soleplate and set the iron to its “max” setting, passing it over a scrap of cotton fabric. That didn’t quite work, so I rubbed the soleplate with the fabric balled up and it cleaned completely. Even though I was gentle, a very tiny chip of ceramic coating, about the size of a flake of dandruff ,came off the soleplate about three-quarters of the way down. Clearly, the ceramic is quite fragile. 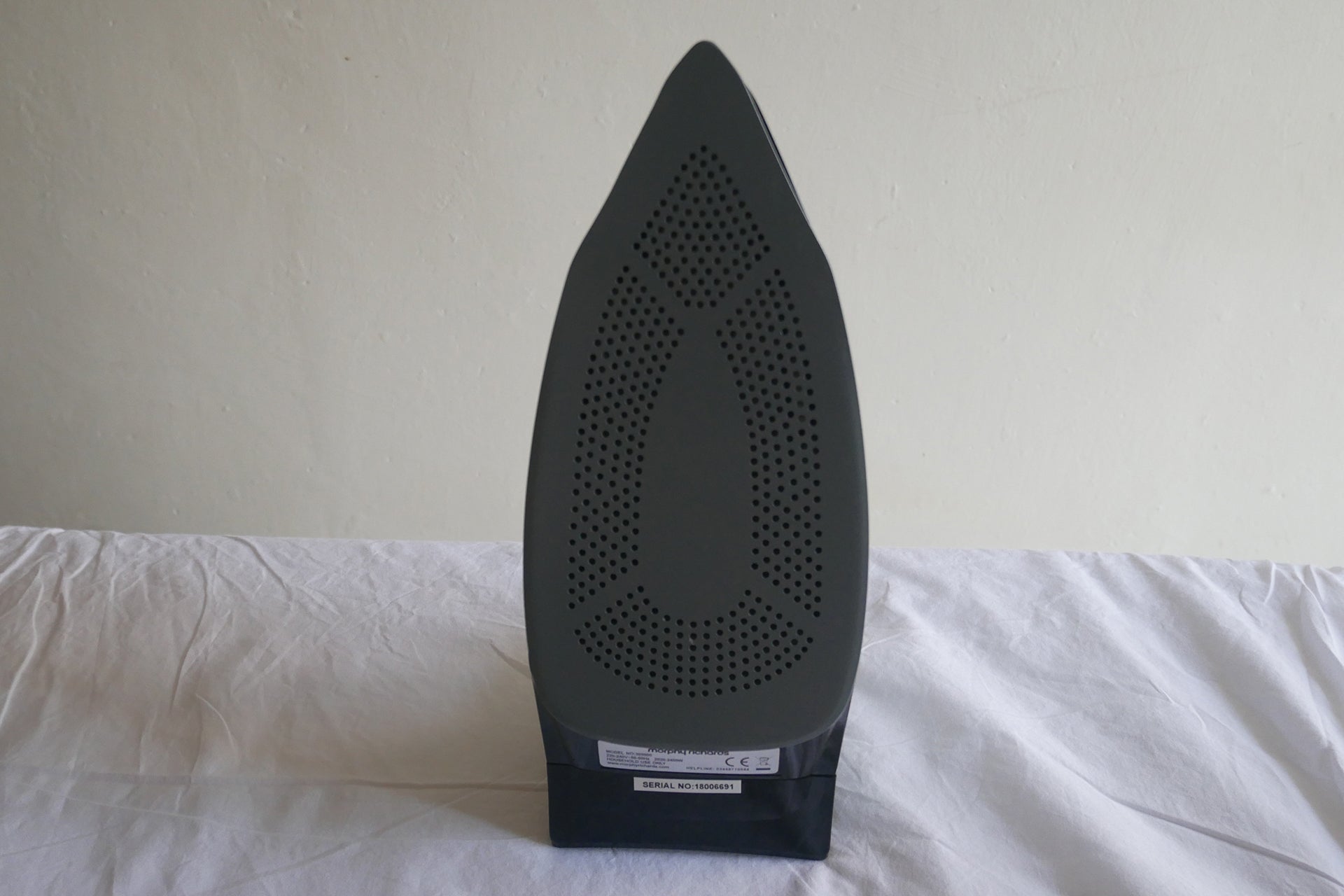 Ironing on a hot setting with the steam is very good. You really appreciate the one-bar of pressure in the iron. It does a great job of pressing out the creases of heavy cotton fabrics. The iron was also good on polycottons, wools and silk. Once it was cool enough, it did well on polyester, too.

It was one of the best irons at getting the creases out of the bottom layer of a sheet folded in four, and almost removed creases out of bone-dry linen. The steam boost is strong but subdued when the iron is horizontal, sounding a little like a snort; it’s far stronger when you use it vertically to steam clothes, where it creates a decent puff of steam.

The auto shut-off worked efficiently. I left the iron face-down on a cotton pillowcase on the “max” setting, thinking that a 60-second shut-off was unlikely to be quick enough to stop the fabric from scorching. However, the iron went into sleep mode at 50 seconds and the cotton was unmarked. It took 7mins 56secs to go into sleep mode on its heel.

Unlike the other irons, a lot more water than steam came out during self-cleaning. It was very hard to get the last bit of water out, and as I didn’t think it was a good idea to heat the element without water in it (which you’re told to do). So, at that point I gave up on getting the water out and switched the iron on again to dry it. The whole process took 4-5 minutes. 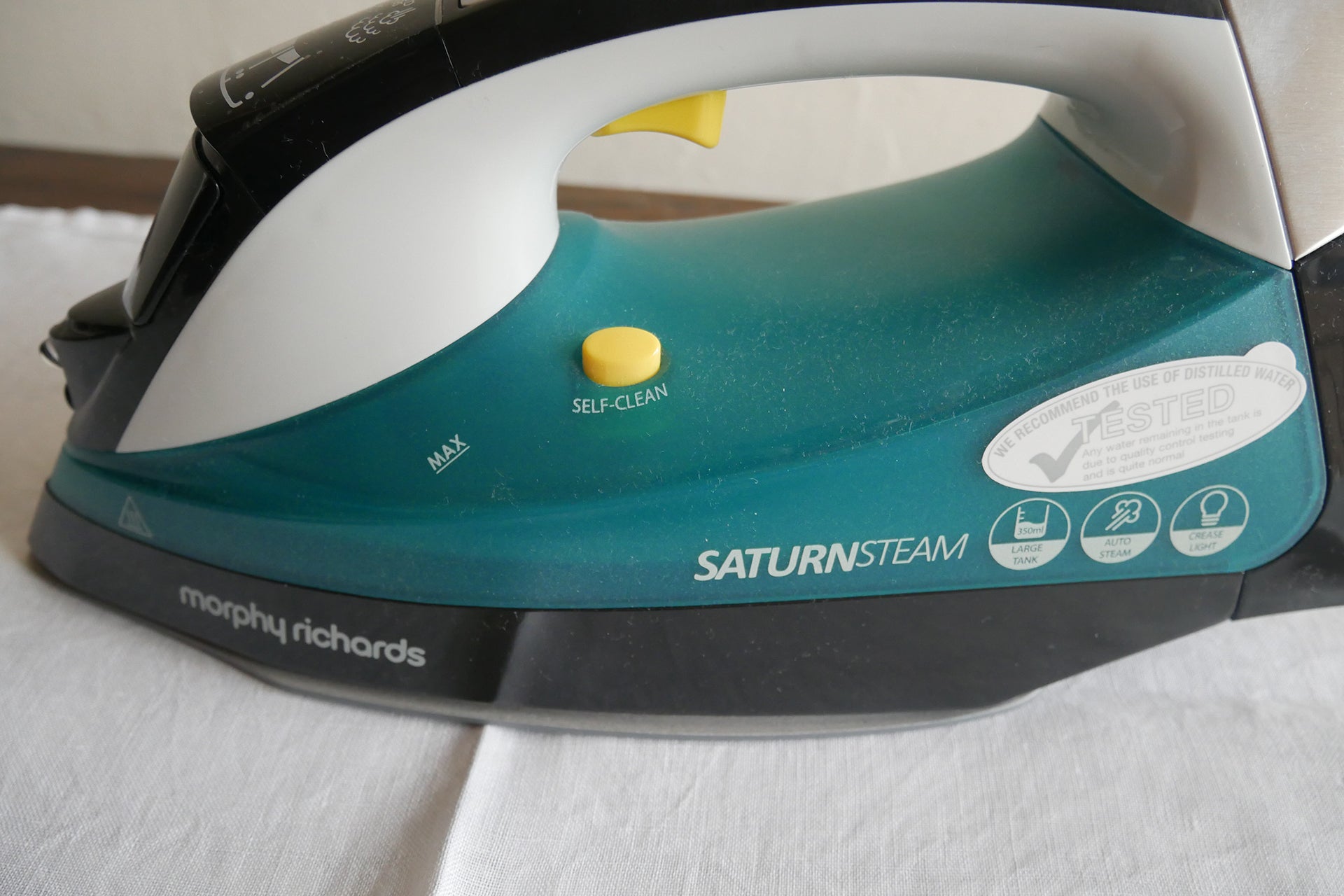 If you want steam power that’s close to what you’d get from a steam generator iron, and you treasure features such as a crease light, then the Morphy Richards Saturn Steam 305000 is a good choice. The slightly unreliable temperature indicator is an issue, however, so you may be better off with an alternative model from our Best irons guide.