The Morphy Richards Sear and Stew Rose Gold Slow Cooker 3.5L 460016 can handle all types of meal, but the pot is fiddly to use on a gas hob and won't work on induction hobs.

If style is a priority when you’re buying a slow cooker, then this sleek Morphy Richards Sear and Stew Rose Gold Slow Cooker 3.5L 460016 should be high on your wishlist. Not only will it look gorgeous out on a worktop, it has plenty of features that could make it your cold weather one-pot go-to.

These include the ability to sear meat and veg on the hob before popping in the base, and a choice of three heat settings to shorten or prolong the cooking time so meals will be ready when you are. The pot and lid are both dishwasher safe, so you won’t have to wash up after dinner either.

While the basic shape hasn’t changed, on the outside, it’s great to see that effort has been put into the overall design of this slow cooker. As well as a rose gold band around the top, the colour extends to the dial and subtle branding.

On the dial itself, there’s three heat settings: High, Med and Low – although they’re arranged with Med at the far right rather than in the middle. These enable you to cook from anywhere between four and 10 hours for most dishes. An indicator light at the bottom of the dial shows that the slow cooker is on. 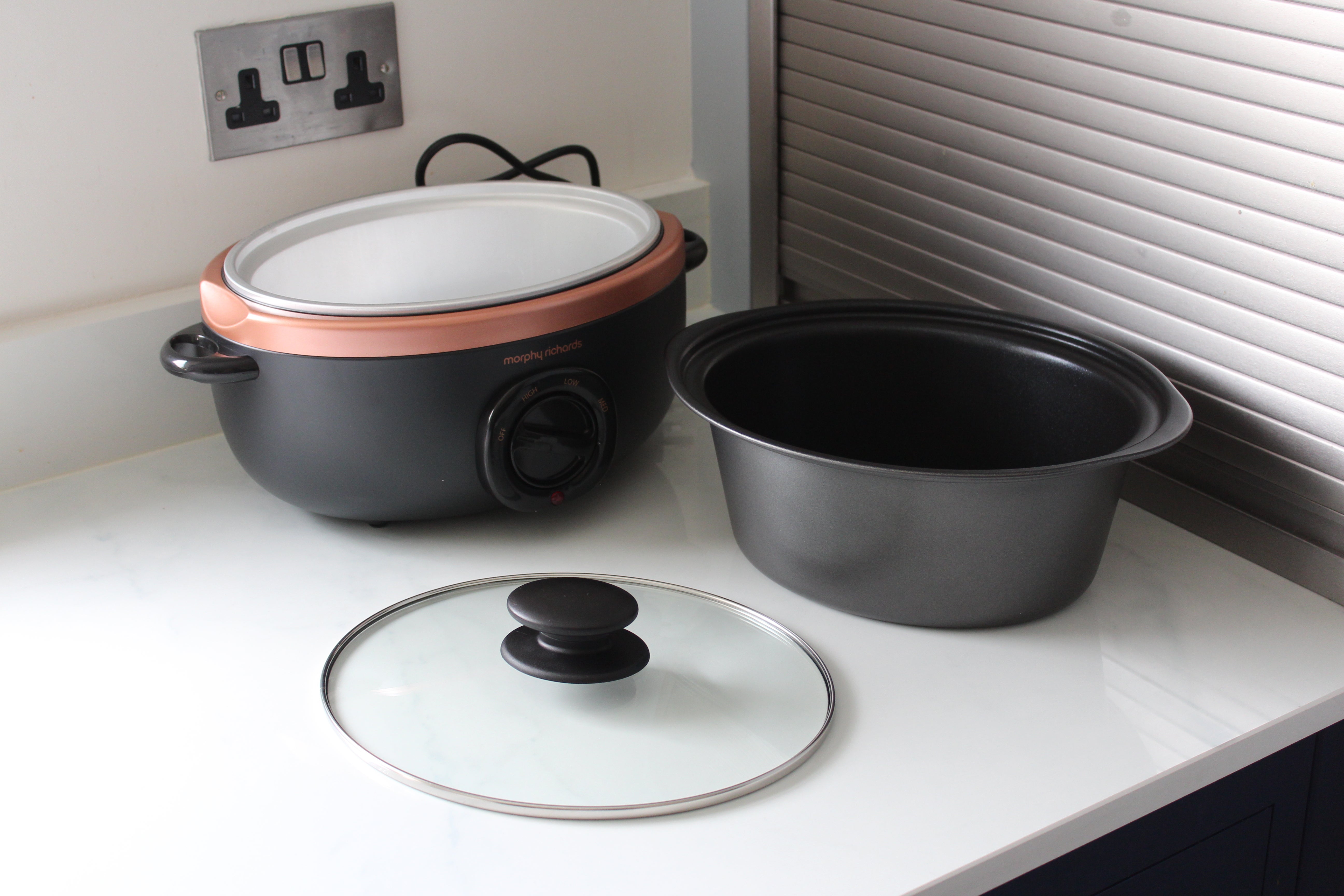 Inside, there’s a non-stick aluminium pot, with enough capacity to cook three to four portions. It can be used to sear food on most types of hob, except induction – which seems like an oversight given its increasing popularity. The pot can then be transferred to the cool-touch base for the slow cooking to start. On top, there’s a toughened glass lid that means you can monitor the cooking process without lifting the lid (and losing heat).

The Morphy Richards Slow cooker was straightforward to get up and running, and there’s plenty of guidance on offer to get the best from slow cooking as well as an assortment of recipes to try.

I started by using the Low setting to make rice pudding – a dish that’s prone to burning when cooked on a hob, usually requiring frequent stirring. After greasing the pot, I added rice, milk, nutmeg and sugar. With the lid on, I left it to do its thing for four hours (the other options provided being High for 2.5-3 hours or Med for 3-3.5 hours). 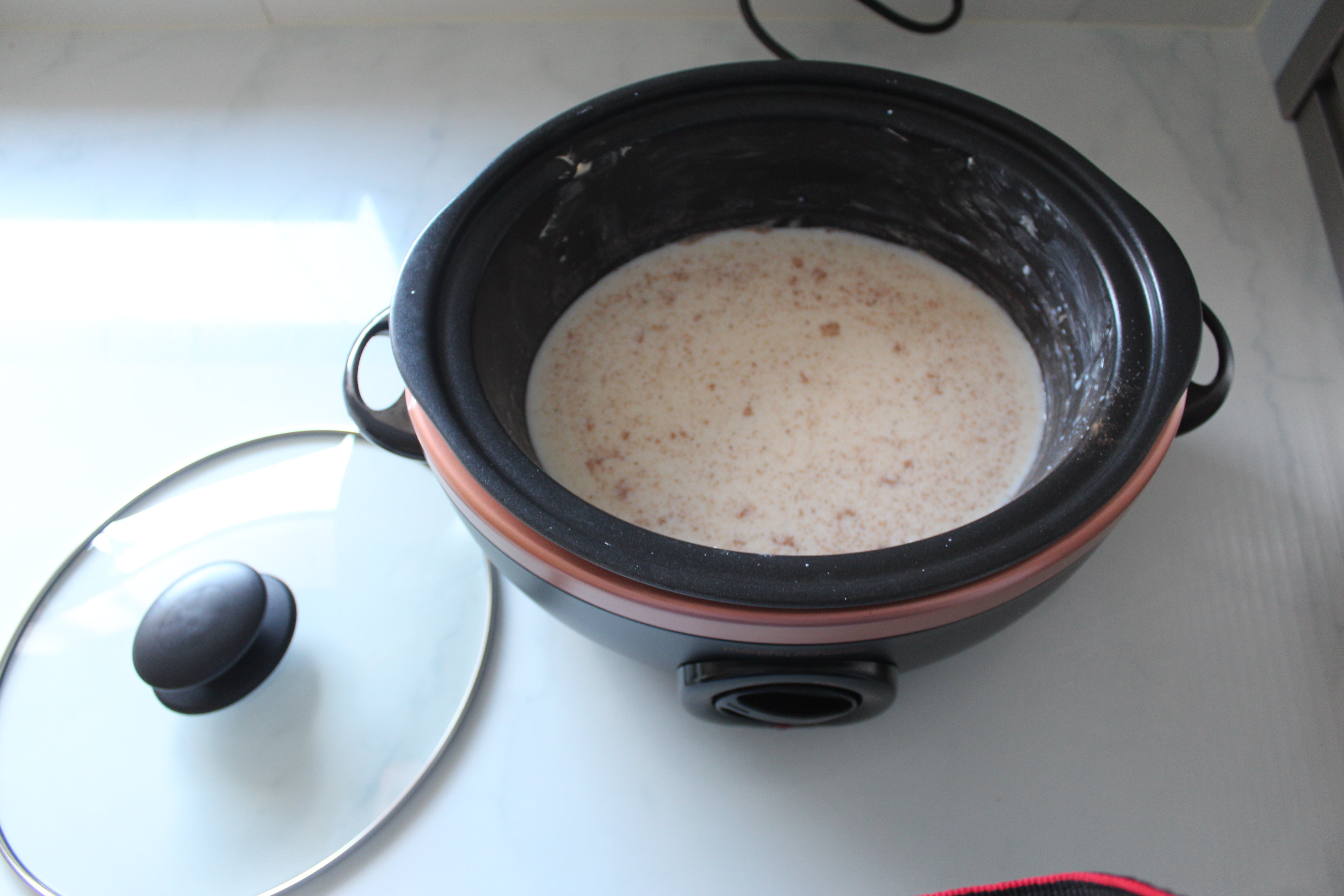 I was able to check on progress halfway through cooking thanks to the glass lid, which remained clear enough to see the contents without lifting, despite condensation. The base stayed cool to the touch.

After the cooking time had elapsed, the rice pudding had formed a slight skin around the edges of the pot, but there were no burnt bits of milk. A fair amount of liquid remained, which I reduced by raising the temperature to High  and keeping the lid off for another 20 minutes or so.

The resulting pudding was perfectly cooked, with no hard grains of rice and a consistent texture. Next, I made Bolognese, which required initial sautéing on the hob. Placing minced beef into the pot, I set it on top of the cast-iron support of a gas burner. The pot slipped around as I stirred the meat, so I had to wear an oven glove to hold it steady as the handles became too hot.

This made adding subsequent ingredients tricky, as I had to keep removing the glove. The pot heated up and cooked much like a normal pan, with a comparable capacity to a large saucepan. 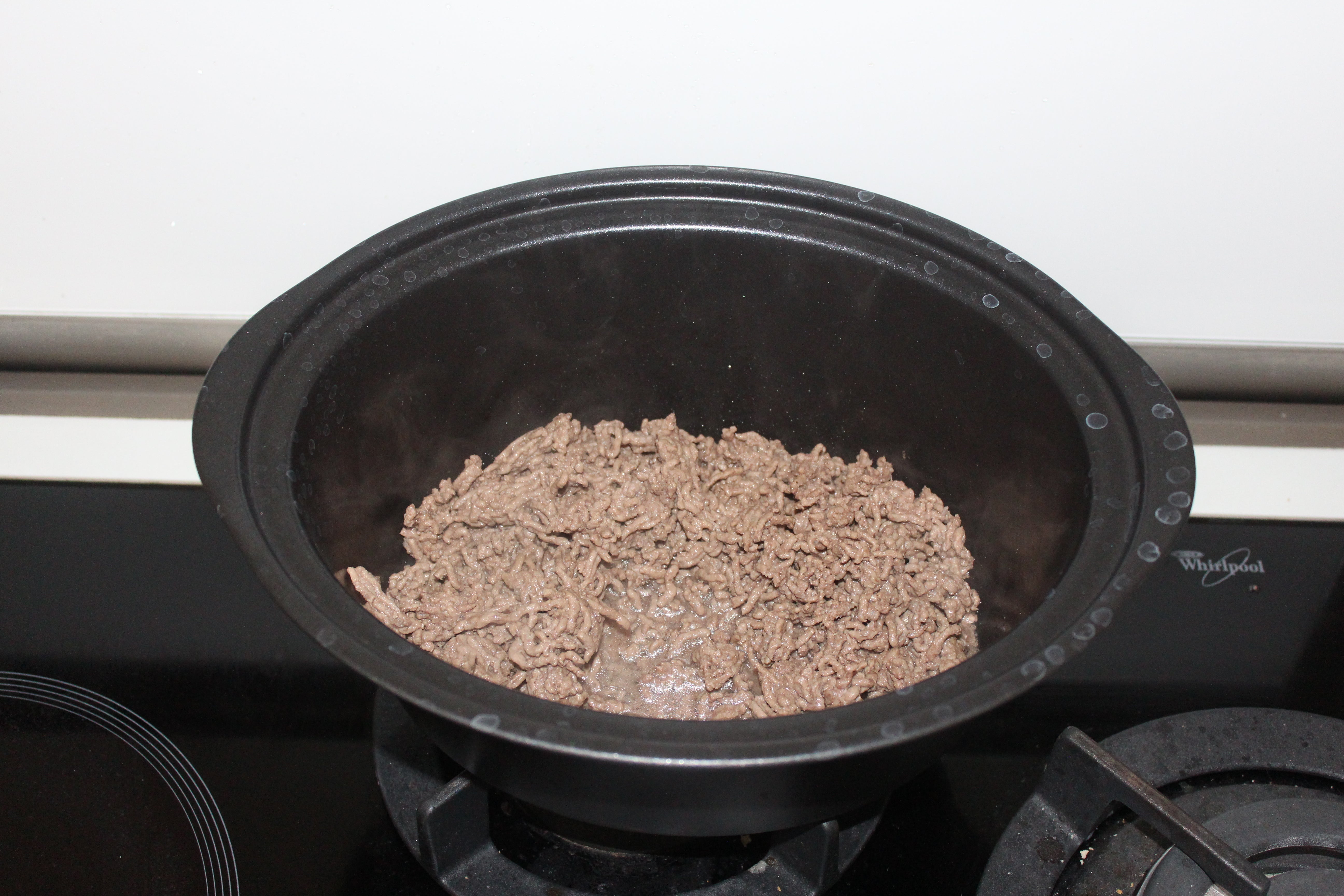 Once sautéed, I transferred the pot to the cooker’s base and set it on High, which translated to a time of four to six hours (it can be extended up to 10 hours on Low). As the Bolognese simmered, the cooker’s base grew warm on the outside – but it wasn’t hot.

Inside, the sauce could be seen gently bubbling and there was a strong food smell in the kitchen. After five and a half hours, I turned off the cooker. The Bolognese was thick and meaty, with just enough liquid left over for a sauce that wasn’t too runny. Although nothing was burnt, smaller pieces of mince tended to be slightly dry. Finally, I made vegetable soup, again sautéing a mixture of vegetables on the hob in butter and encountering the same problems of slippery pot base and wearing an oven glove.

Once I’d added stock, I transferred the pot to the base and set it on Med, which had a time of six to eight hours. 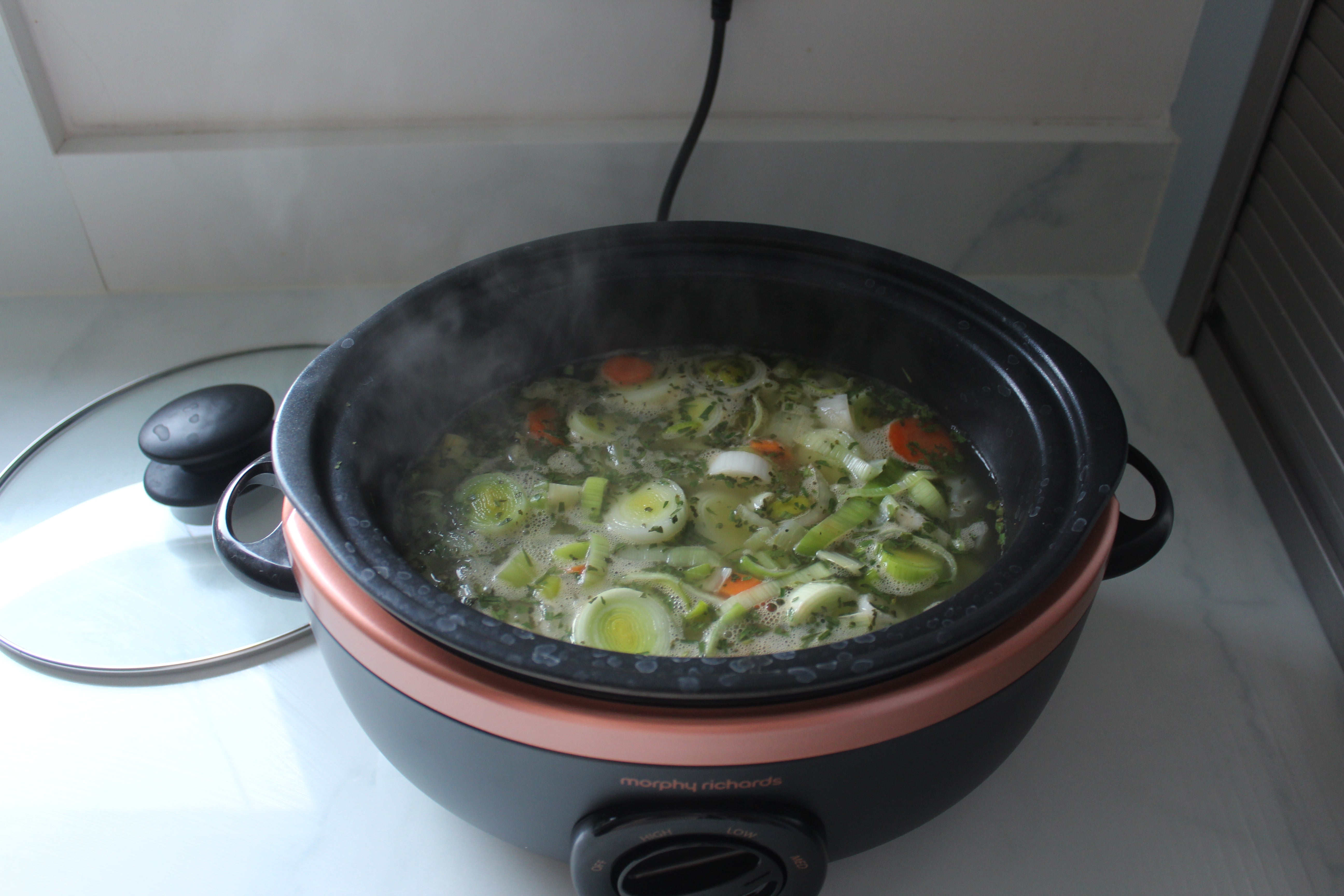 This recipe didn’t include options for slower or faster cooking. As it simmered, the kitchen was once again filled with a strong food smell, although there was no noticeable bubbling.

After eight hours, I turned the cooker off. The soup had little colour left in the vegetables, so it’s possible that this recipe would benefit from a reduced cooking time. Nevertheless, the vegetables held their shape and weren’t mushy, plus the soup was rich and flavoursome. 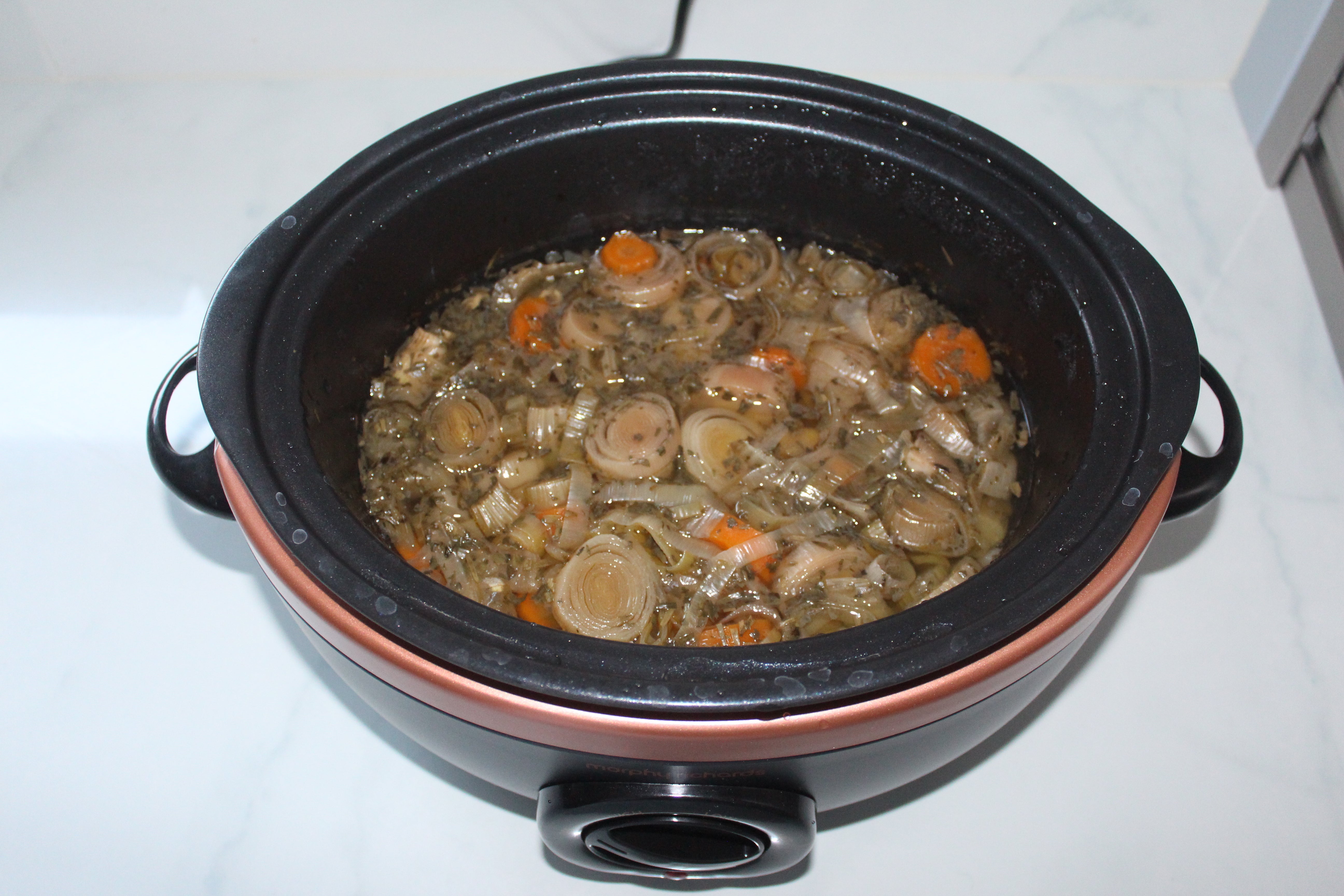 Both the pot and the lid are dishwasher safe and simple to clean by hand. There was discolouration on the pot’s bottom, possibly from the hob’s flame.

While it boasts fewer features than equivalent appliances, the cooker works well and looks great as it does so. There’s a degree of flexibility if you can work out when you need meals finished,  and it’s simple to clean, making it an ideal buy for small families and couples.

It would be good to see induction hob compatibility and a lid with a seal to make it more efficient, but if you cook on gas or electric and love coming home to the smell of dinner, it could be your ideal slow cooker.

A simple slow cooker that can handle all your cooking needs.