Back in April 2004, Mio’s Digiwalker 168 impressed me as the first PDA to feature a integrated GPS receiver. Considering two and half years have past the Mio Digiwalker P550 should be bowling me over with how far things have moved on but in Pocket PCs terms the changes are not as marked as I would have hoped.


There’s a faster CPU and more RAM but the screen resolution hasn’t changed at all. The main difference is the housing. There’s no longer any need for a large flip up aerial adding bulk. Overall, it’s a better built unit, with a solid feel and no squeaks or rattles. It’s quite heavy though at 170g. The front has a pleasing sheen to it, while the rear is rounded and feels good in the hand. 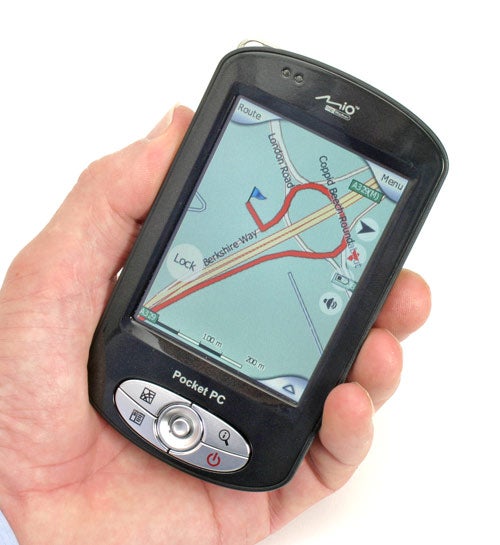 In the box you get a cradle which isn’t great to look at but is easy to fit. It’s easy to have the PDA standing in portrait mode or rotate it to landscape. Power is provided either by a wall charger or by an in-car charger that plugs into the USB port.


The device has the usual arrangement of four buttons surrounding a central joystick. One is an on/off button, but pressing any of the buttons wakes up the device. The bottom left is mapped to the contacts list, while the top right takes you back to the main menu screen. The top left button switches the screen between landscape and portrait mode and works quickly, which is good.


On the left hand side you’ll find an SD card slot along with a headphone socket. The right hand side is devoid of anything save for serial numbers and a tiny hole that is a microphone – not a reset switch as I at first thought. This is in fact on the underside along with a ‘proper’ on/off switch and a mini USB port. 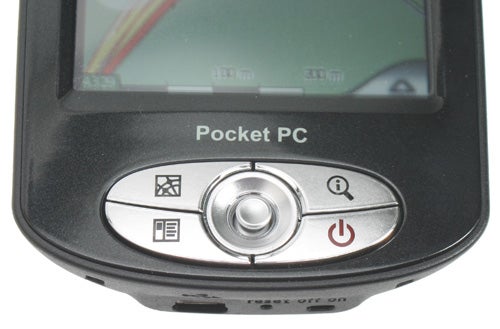 Hook your PC up to this and you can sync via the supplied Active Sync 4.1. Having used a Palm device for a while, the integration between Outlook and PDA via Active Sync is quite refreshing – with your inbox emails appearing on your PDA moments after they’re received.


Wi-Fi and Bluetooth are both included on the device and the interface makes it easy to have one on and not the other or both on or off. It was a simple process to get the PDA online and to beam pictures to it from a mobile phone. It’s a shame though that the screen isn’t higher resolution to make the most of those pictures. I found that colours looked quite strong on the PDA but the screen could be far better lit. Looking at an image straight on in landscape mode, I found that the bottom half is well lit but the opposite side is darker, which means that you have to tilt it to get the image you want. This indicates that the backlight is located only on one side.

The only hint that this is a GPS capable device, are the letters inscribed in the plastic at the top. In one corner is a plastic hook for attaching a strap while the stylus is located in the other corner. It can be extended or shortened, which can help you use it when placed in a cradle close to a windscreen. The top can be unscrewed and can be used to insert into the reset switch, which I needed to do on one occasion.


The PDA runs Windows Mobile 5 and sports a processor that operates at 400MHz. There’s 64MB of RAM and 128MB of ROM, though only 54.10MB and 95.84MB respectively are actually available for use.

The battery is rated at 1,200mAh and a figure of 4.5 hours is quoted for battery life. This might be possible in certain cases, but not when the screen is left on and the internal GPS unit is active, as it would be on a car journey. In this situation you’ll get a low battery message pop up after only an hour or so. I found this worrying, annoying and far too premature, as it will last closer to three hours.


However, the first time I had to rely on the Mio to get me to a destination it turned out that the car I was in had no power sockets, so I had to hope the battery would last, lest I found myself lost in the mists of deepest Uxbridge. Fortunately, it did.


The internal GPS unit is the now ubiquitous SiRF Star III, which should mean great performance, accuracy and staying power. However, in the P550, I had some very mixed results. To save battery I put the device into a Powersave mode, and soon enough the screen turned itself off. However, when I turned it back in to see where I needed to go, the GPS connection took some 15 minutes to recover, which was quite disappointing. This was in good conditions with a clear view to the sky. It took a reset to get the device going again, but in the meantime I was left stressed and nearly stranded. However, later it re-established the link with the satellites much more quickly, so I could put it down to a one off.


I also found at one point that it got confused about which road I was on and which was I once facing, which left me driving for a while following my nose while I waited for it to sort itself out.

While the Mio 168 used CoPilot software, the P550 is bundled with MioMap v3. I first encountered MioMap on the C710 and while it can do a job I found it confusing and frustrating and little has changed here. The style and textures of the buttons looks basic, while the layout is anything but intuitive – working out where various functions are is a hit and miss affair. I’m used to t he logical arrangement of a TomTom and by comparison MioMap is a hair puller.


Spoken directions are clear but only one voice is on offer, a male one and I found it overly loud and intrusive so I turned it off. Movement on the map is jerky and sometimes the lag after you’ve turned is quite noticeable.

Another issue I had is that the view switched away from the standard 3D view I prefer. Sometimes 3D isn’t the best view to have on the road ahead but it changed on the P550 at what seemed like odd times. Eventually I got used to the software and there are some good features, such as a buttons that can be set to route you quickly to Home or Work, and a POI (Points of Interest) database that directed me to a car dealer when asked. However, I would have preferred to be able to search POIs via name rather than having to guess where they might be located in the restrictive categories. 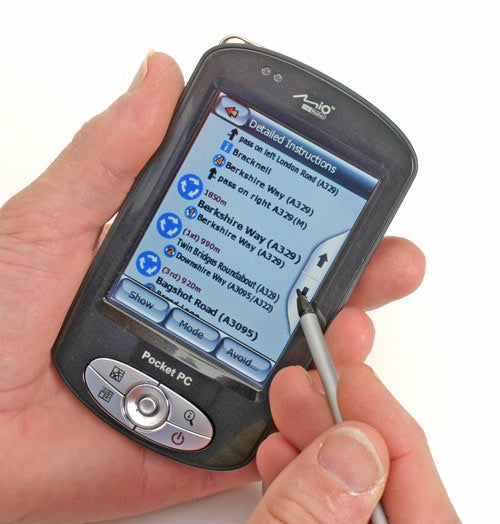 The software supports TMC, but no hardware is included so you’ll have to add it yourself. The nail in the coffin for the software for me though is the lack of seven digit postcode support. While this was a rarity a couple of years ago but it’s available on all TomTom devices now and with CoPilot, so I wouldn’t part with my cash for anything that doesn’t offer it. Trying to pin point a business that doesn’t have a street number without a postcode is difficult and frustrating.


An overarching problem though is that the idea of a non connected PDA seems rather old hat. The P550 is a respectable PDA and Pocket PC does make for a very capable email and contacts device. The large screen does make viewing GPS maps easier but you’re not actually getting more screen real estate than you do on the latest phones, which feature the same screen resolution. It seems to me that this type of device is a stop gap to when GPS devices will be embedded into conventional phones. At the moment you need something the size of a PDA simply for reasons of battery life, but even in this form factor I found the staying power too short. 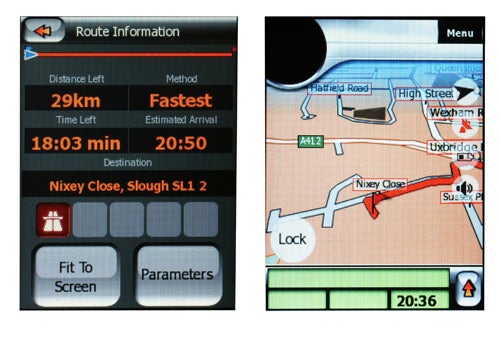 Of course if you are after an all-in one-device Mio has the PDA/GPS A701 Phone, which is a great device but still on the bulky side. What puts me off the Mio though isn’t the size as much as the software and its lack of seven digit postcode support.


It’s great news then that you can pick up the P550 sans Mio Map, enabling you to buy the software of your choice and install it. For example TomTom 6 for Pocket PC can be picked up for around £70, while the PDA can be had for £247.93 at the time of writing from Advancetec. In this form the P550 would be worthwhile, but my dislike of the MioMap software means that in this form I can’t recommend it.


The Digiwalker P550 contains an embedded SiRF Star III GPS chip, in a relatively svelte housing, making it ideal for navigating in the car, or on foot. It’s also a good PDA with both Wi-Fi and Bluetooth. However, battery life could be better and the MioMap software is confusing and lacks seven digit postcode support. If you must have a GPS enabled PDA buy it with no software and get TomTom 6 separately. 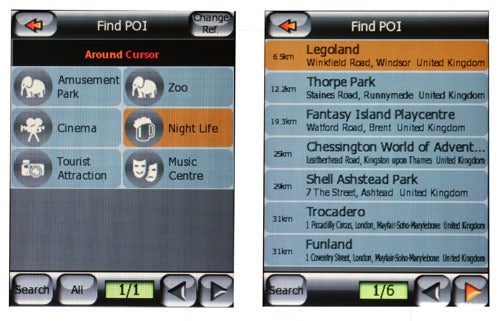