There’s an awful lot going on under the skin of a modern PC. To comprehend it all would be a feat quite beyond most users, so we tend to take our machines at home and at the office for granted.


We often forget that not too long ago most written communication took the form of letters and faxes, and the concept of being able to look something up on the Internet was as foreign to us then, as going to the library to do some research is to the teenagers of today.


Nowadays, the monitor, mouse and keyboard are as much a part of working life as pen and paper, yet many people work away on uncomfortable, cheap keyboards, because that’s what was supplied with their original machine. There are, however, quality alternatives around, which can improve your keyboarding life and ease your aching mouse wrist.


Microsoft’s latest offering – the Optical Desktop with Fingerprint Reader – is, as with most keyboards supplied with home PCs these days, awash with features. Star Trek fans will feel right at home, though mercifully the number of flashing lights is kept to a minimum and the likelihood of a hostile alien ship scanning your PC for life signs is pretty much zero.


What Microsoft hopes will sell this particular pack to frequenters of PC World and the like, however, is not its star-ship array of extra controls, but rather its spiffy fingerprint reader. The idea with this is that, instead of having to remember hundreds of different user names and passwords, you associate them instead with a finger print, avoiding memory and finger strain.


Using the reader is simplicity itself. Once you’ve registered your fingerprint(s) – a process that takes around a minute – the software allows you to log in to your Windows XP account simply by pressing your finger onto the small oval window to the left of the main keyboard for a second or two.


The really clever thing, though, is that whenever you come across a dialogue box or frequently used website that requires a username and password you can do the same. Just dab one of your registered digits onto the reader, fill in the boxes and whenever that logon presents itself again, all you have to do is scan your finger and the software fills in the username and password boxes for you.


The one major sticking point is that, because it’s a Microsoft product, the web functionality only works with Internet Explorer. We tried to log on to a Gmail account using FireFox and couldn’t get it to work.

Despite that annoyance, this is a clever, well thought out piece of kit that, despite Microsoft’s warnings to the contrary, may well improve your security. Think about it: there’s no need to check the rather unsafe “Remember my password” box any more, and no need to link or even duplicate passwords in order to remember them all. It works beautifully too, hardly ever misreading.


The all-important key action doesn’t let the side down either. It feels positive, soft and comfortable, while at the same time managing not to get over-clacky or noisy – something that the best ‘feeling’ keyboards sometimes suffer from. And there’s a whole host of useful shortcut keys on board too, from the calculator button on the top right of the console to the double up function keys that also let you undo, redo, open, close, reply and so on at a single press.


The mouse supplied is top quality too. Microsoft’s top-of-the-range optical wireless mouse is unencumbered by nasty wires – so no more cable snagging, or cleaning to do, but you do have to weigh this up against the fact that it is powered by a pair of AA batteries, which will need changing regularly. It fits snugly in the hand too, though we must stress that mouse shapes are very much a matter of personal preference. Try it before you buy. 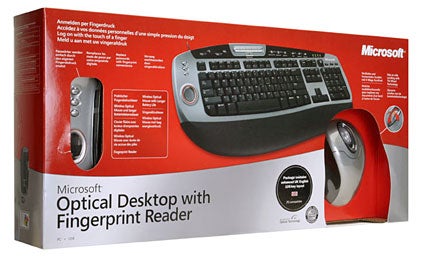 
The only thing that may put you off this quality package is the price, which at around £60 is on the expensive side for a keyboard and mouse package, though it isn’t what we’d call extortionate. On the other hand if you’re a keen surfer, online shopper, banker or ebayer, the convenience of being able to associate your fingerprint with all of your logins is something that’s worth paying a little bit extra for. And there’s not too much wrong with the key action or optical mouse either. Wholeheartedly recommended.