What is the Microsoft Designer Bluetooth Desktop?

We all know that manufacturers typically focus on making their ‘hero’ devices as glamourous as possible, but Microsoft’s decided to spread the love, sprinkling some stardust on its Bluetooth keyboard and mouse set.

Costing £99, it comprises a mighty attractive keyboard and mouse combo. However, Microsoft is guilty of focusing a little too much on beauty over brains. 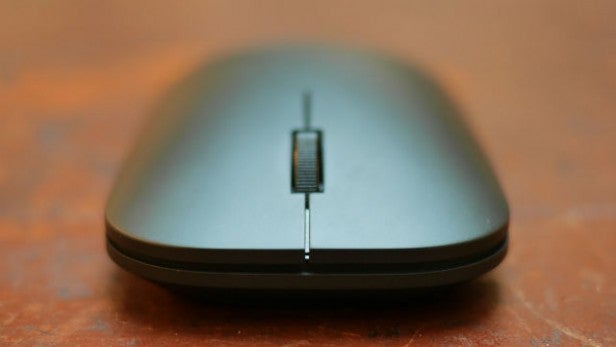 As its name suggests, the Microsoft Designer Bluetooth Desktop is a stylish bit of kit. Both the keyboard and mouse are beautifully crafted, coming in a matte black colour scheme that’s low-key and refined. Rarely has a mouse and keyboard set been so shamelessly desirable.

Soft touch plastic is the build material of choice, and Microsoft’s done a brilliant job of making it feel as luxurious as possible.

Under the hand, you could almost mistake the mouse for a giant chocolate truffle, which can never be a bad thing. It’s velvety smooth and pleasantly weighty, tipping the scales at 80g (without batteries).

The top of the mouse is refreshingly clean. Apart from the scroll wheel, a fine seam splitting the left- and right-click buttons and a discreet Microsoft logo, it’s totally plain. It’s also symmetrical, meaning you can use it in either hand, or both if you’re ambidextrous. 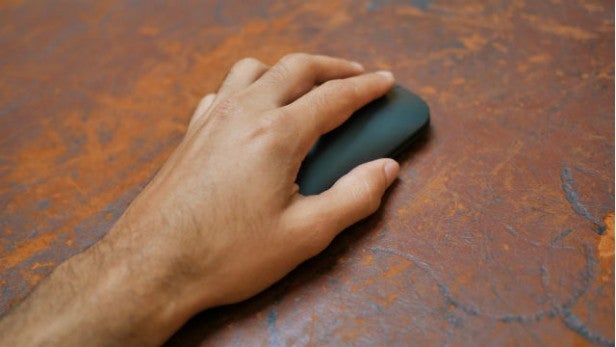 Unfortunately, greasy fingerprints show up clearly, but you can easily wipe these away with a tissue or cloth.

The bottom of the mouse features the power/binding button, a magnetic battery flap and an LED light. There’s also a shiny loop of plastic surrounding the battery zone, which the entire mouse stands on. A thick seam runs around the edge of the entire unit, connecting the top and bottom sections.

I have little hands, but the base of my palm, my entire thumb and the fingertips of my little finger and ring finger spill out onto the desk when I hold it.

In order to slide the mouse around, you have to lift up your thumb and fingers and perch them on the seam. It hardly requires herculean levels of effort, but can become slightly uncomfortable after prolonged use. 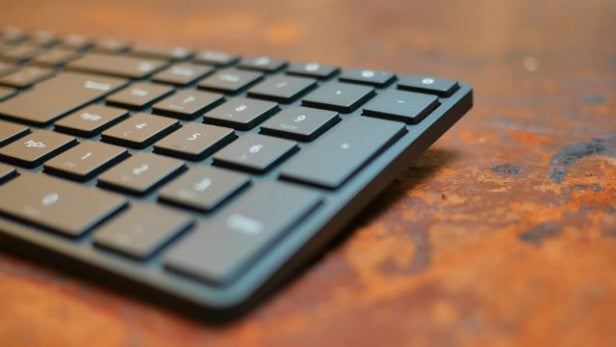 Like the mouse, the keyboard is very elegant. Measuring 389.2 x 112.2mm, it’s smart, angular and compact enough to fit on even the most cluttered of desks.

This is despite the inclusion of a number pad, which sits in its traditional place on the right-hand side of the main keyboard.

Across the top of the rear, meanwhile, is a panel of black plastic that both houses the batteries and acts as a stand. A tiny binding button sits on its right-hand edge, and two small rubber feet keep the plastic chassis off the desktop. 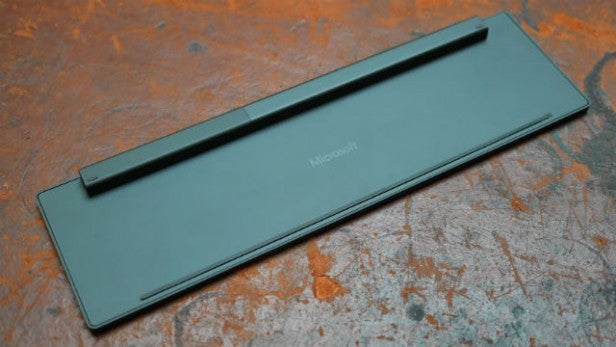 Another, much larger, rubber foot sits parallel to the other long side of the keyboard’s rear, and keeps it stable even if you decide to use it on a sloped, polished surface.

While Microsoft hasn’t revealed how slim the keyboard is at its thinnest points, we can confidently say that it’s well under 10mm. While that may not be the most important feature, it’s still damn impressive. This is no mere keyboard. This is desktop bling.

Like the mouse, it’s soft to the touch, with each key feeling almost like it’s been individually padded. At 420g without batteries, it feels durable too, like it’s built to last.

Once again, fingerprints show up easily, which can make the keys look grubby. However, again they’re easy to rub away. 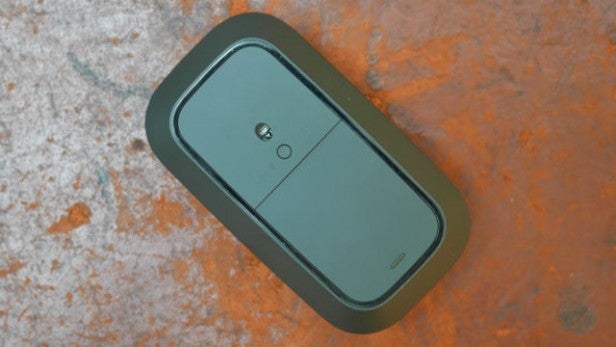 Getting the Designer Bluetooth Desktop up and running is a piece of cake, but you need to first ensure that your device is compatible. The keyboard and mouse play nice with anything running Windows 8 and above, Windows RT 8 and above, Mac OS X 10.10 and above, and Android 4.4 and above, which also supports Bluetooth 4.0.

Once you’ve done the relevant checks and loaded it with batteries, the desktop set is ready to be hooked up.

You first need to push the binding button on the underside of the mouse for three seconds, after which the LED will flash blue. At this point, you need to head into your device’s Bluetooth settings and complete the connection. The same process applies to the keyboard. Easy peasy, lemon squeezy. 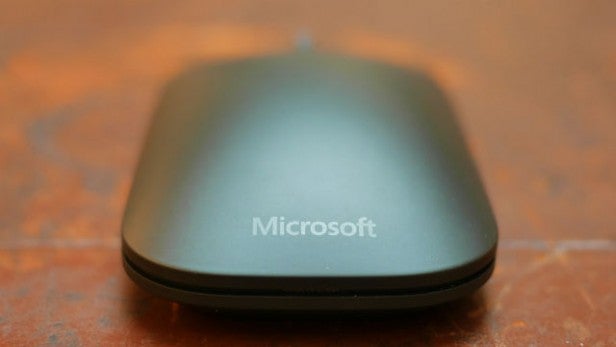 The mouse runs on BlueTrack technology, which essentially means you can use it on virtually anything but clear glass and mirrored surfaces.

That makes it a good choice for consumers who either don’t have a desk or simply prefer using their leg or the floor as a mouse mat. Sure enough, it works just as well on jeans or carpet as it does on a wooden table top.

It zips around smoothly and is capable of hitting speeds of 10 inches per second. It’s also nice and precise, moving at 1,000 points per inch. Physically speaking, the click-to-click scroll wheel is pleasantly bumpy, and allows you to browse through lengthy documents at a consistent rate. 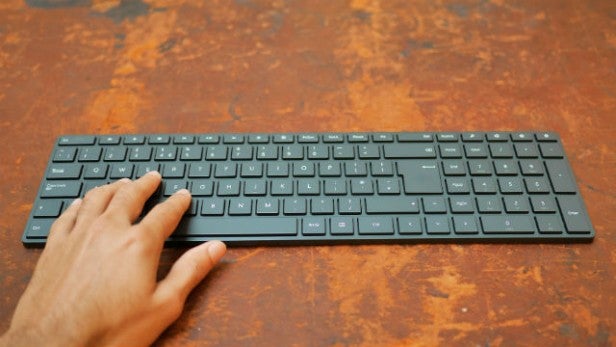 While that’s all well and good, we’re disappointed not to see any bonus features, such as the ability to simultaneously connect with several devices, or scroll at different speeds.

Its Chiclet-style companion, on the other hand, is slightly more of a crowd-pleaser.

As well as a number pad, it includes a row of clearly-labelled media keys, so you can quickly and easily pause, rewind and fast forward music and videos. You can adjust volume and brightness directly through the keyboard, which also features a Print Screen and Start button.

If you’re a Windows 8 user, you’ll be pleased to find a Charms key above the number pad, but this becomes obsolete as soon as you upgrade to Windows 10, or if you use Mac OS or Android.

The keyboard is comfortable to type on, but not perfect. Not only are the keys soft to the touch, but they also offer plenty of travel, which is an excellent achievement considering how thin it is. The Enter and Backspace buttons are also very large, which is refreshing to see and allows for quick typing.

However, in making the keyboard generous in functionality but small in size, Microsoft has had to make a couple of compromises. First, while the gaps between individual keys are sensible, the various sections of the keyboard aren’t split up as clearly as we’d ideally like. 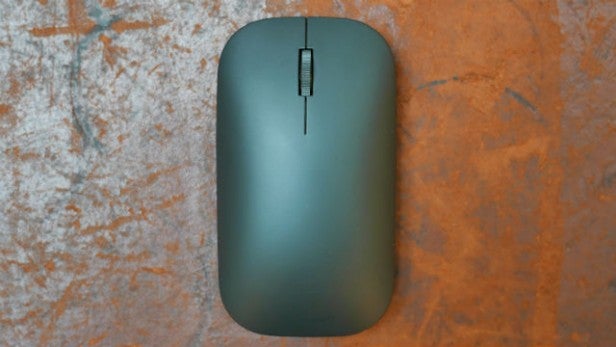 The number pad, while a very welcome addition, lurks off puttingly close to the main keyboard. It’s cramped, and takes some getting used to. It’s like your pudding sharing the same plate as your main dinner: not the biggest issue in the world but, given the choice, you’d keep them further apart.

We’re also disappointed to see that there’s no backlighting, so using the keyboard in a dark room is tough.

The desktop set runs on AAA batteries, of which four are included in the box. The mouse requires two, and the keyboard needs the other two. No microUSB ports and cables here.

Microsoft claims the keyboard will keep going for 12 months before the batteries need replacing, while the mouse should last for six months. These are solid figures, and we’re sure most users won’t feel too aggrieved with having to pick up new batteries twice a year. 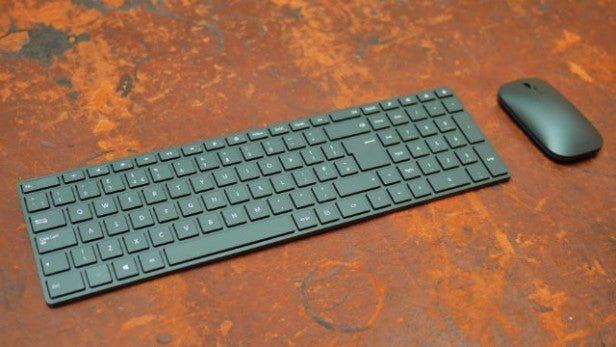 Should I buy the Microsoft Designer Bluetooth Desktop?

There’s no denying that the Designer Bluetooth Desktop is a high quality set. It’s great-looking and well-made – a welcome addition to any workstation or home office regardless of whether you’re a Windows, OS X or Android user.

However, £100 isn’t pocket money if you’re after new peripherals, and neither the mouse nor the keyboard offer any of the special features we’ve come to expect from the best desktop kits. What’s more, the mouse will prove uncomfortably small for large-handed users.

A gorgeous and brilliantly-made mouse and keyboard, but limited in terms of features.