The TrustedReviews office is generally awash with new, cool and exciting technology, and that tends to desensitise the team somewhat. It therefore takes something a little special to get my pulse racing, and when I do get excited about a new product I definitely don’t expect it to be a keyboard! Amazingly though, I have to say that I found myself surprisingly keen to get Microsoft’s new Arc wireless keyboard out of its box when it arrived on my desk.

The Arc is very different to the vast majority of keyboards that pass through the halls of TrustedReviews. First and foremost, it’s a beautifully designed piece of kit, and second, it’s tiny. For any Mac users who are using the super-slim, aluminium wireless keyboards, you’ll know exactly the kind of form factor that Microsoft has aimed for with the Arc. Okay, so the Arc doesn’t have the brushed aluminium finish of Apple’s effort, but as a long term user of Apple’s wireless keyboard, I can confirm that the Arc is a much better device – but I’m getting a little ahead of myself.


The Arc really is a compact keyboard measuring about 310 x 155mm, but despite it’s small dimensions it’s an absolute joy to use. As you’ve probably gathered from the pictures, the Arc utilises an isolated layout, much like many modern notebooks, and of course, just like the Apple keyboards. However, unlike the Apple keyboards, there’s a surprising amount of travel to the keys on the Arc. The break is also unusually solid given its size and depth, and each key literally springs back with each strike, setting your finger up for the next keystroke.

The big difference between the Arc and the Apple wireless keyboard, is that with the Apple unit I’m happy to forego a degree of feel and usability in favour of beautiful design and compact dimensions. But with the Arc I don’t feel as if I’m compromising on usability at all, despite the fact that it’s every bit as slim and stylish as the Apple option. In fact I would happily choose to use the Arc as my main keyboard on a daily basis.


Of course aesthetics are a matter of personal taste, but despite the lack of a metal finish, the Arc really does look superb. The glossy black finish gives it a classy persona, and doesn’t pick up as many fingerprints as I would have expected. The keys are matt black and have a tactile finish that reduces the chance of your fingers slipping from their desired targets. The Spacebar is also far larger than on the Apple wireless keyboard, although this comes at the expense of separate cursor keys – the Arc makes do with a four-way rocker button, which saves space, but isn’t as easy to use.

As the name suggests, this keyboard doesn’t lay flat on the desk, instead it arcs in the middle. This design makes typing for long periods incredibly comfortable – there’s no wrist rest, but because the front of the Arc is so low, resting the heels of my hands on the desk makes for a great angle of attack on the keys.

Given its diminutive size, there’s not much in the way of extra keyboard functionality on the Arc. That said, you do at least get dedicated buttons for volume and mute. Here the Apple wireless keyboard has an advantage, with lots of Mac OS functionality, like Exposé, mapped to specific keys. Of course the difference being that the Arc is designed to work with any computer, running any operating system, including Macs, so some compromises have had to be made.

Of course since the Arc is designed to be universally usable, it needs to ship with a USB dongle, rather than just relying on Bluetooth like Apple’s keyboard. That said, Microsoft has made a concerted effort to ensure that employing a dongle hasn’t made using the Arc cumbersome. First up, the dongle is tiny – it’s the same size as the dongles that ship with the latest Microsoft mobile mice. Second, as with the mice, the dongle is stored inside the keyboard when not in use. Actually, the dongle is stored in a magnetic recess in the base of the keyboard, which makes transporting the Arc between PCs simple.

The downside of the new, tiny Microsoft dongles is that you can’t control multiple devices from one. That means that if you want to use a Microsoft mouse and the Arc keyboard, you’re going to need to have two dongles plugged into your PC, and carry both with you when you’re on the move. The Arc also comes with a fabric slip case to keep your keyboard clean and scratch free when you do throw it in a bag and take it with you.


The Arc keyboard is powered by two AAA batteries, and although I’m not generally a fan of anything using AAAs, you should get a decent amount of life out of a pair. The battery life can be enhanced if you remember to power the keyboard off when you’re not using it – pressing the Fn and Esc keys together will power on/off the keyboard. 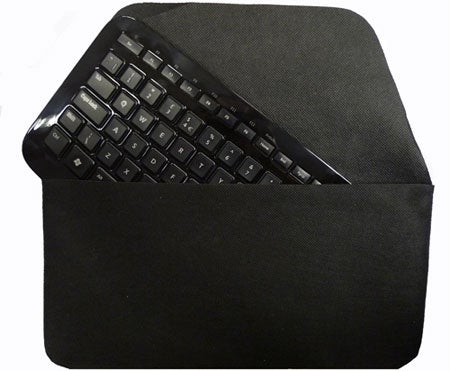 The recommended retail price for the Arc keyboard is £49.99, which makes it almost exactly the same price as the Apple wireless keyboard. However, whereas you’re unlikely to find Apple’s offering for much leas than £50, the Arc can already be had online for around £31, which makes it something of a bargain.


The Microsoft Arc keyboard is an ideal solution for anyone who wants a small but stylish input device that doesn’t compromise on usability. The travel and feel of each key is staggering considering the Arc’s slim dimensions, and unlike many other reduced size keyboards, I’m happy to use the Arc as my main keyboard every day.


The ability to store the tiny dongle in the back of the keyboard itself just adds to its appeal, making it far more likely to be a travelling companion. Even the price (if you look around a bit) is impressive. The only downside is that you can’t share a dongle with another Microsoft peripheral, but even that can’t spoil the party.