What is the MetaWatch Strata?

An open source alternative to the much hyped Pebble smartwatch and much rumoured Apple iWatch. It pairs with an iPhone or Android smartphone over Bluetooth to deliver their notifications to your wrist. Like all smartwatches the theory is it will allow you to keep your phone in your pocket more often by giving you the context of received alerts. A particular benefit on the move or when exercising.

The Strata is the thicker of two models currently offered by MetaWatch and focuses on durability and value. The more expensive ‘Frame’ is slimmer and targeted towards the fashion segment.

At first glance the Strata appears to have a face only a mother could love. The design hasn’t changed since we previewed it in September (link in the tab above this review) and the wide bezel and relatively small 1-inch, 96 x 96 pixel display are a world away from what we expect from our smartphones. But the Strata turns out to look far better on the wrist than off and we regularly received queries and compliments. 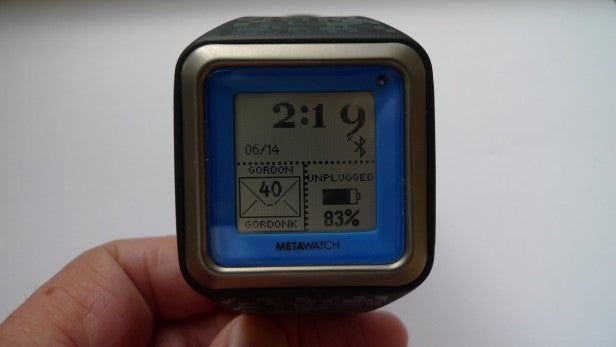 Furthermore the Strata’s design is carefully considered. The body is double injection moulded polyurethane giving the Strata a 5 ATM rated water resistance (verses the Frame’s 3ATM) which is enough to swim in. The downside is this is achieved by omitting a standard microUSB charge port. Instead the Strata has four metal contact points on the rear and a separate microUSB charge clip clamps to them.

On the plus side the Strata is available in multiple colours (black – aka ‘Stealth’ – is the most attractive for our money) and its construction material makes it extremely durable. The screen itself is “polymer network LCD” and made from mineral hardened, scratch resistant glass lens while a strainless steel top ring also protects the screen from impact. Despite several heart in mouth drops during our time with the Strata it remained unblemished.

As for the display itself it has an anti-glare coating and adapts to light, looking monochrome in normal conditions and becoming silver in direct sunlight. As such we found it readable in even the strongest outdoor sun and should you be in darkness it has a backlight.

Inside the Strata is battery sipping Bluetooth 4.0 and MetaWatch claims it will last up to a week on a single charge. There is also a vibrating motor to give the wearer a gentle buzz when they receive alerts… 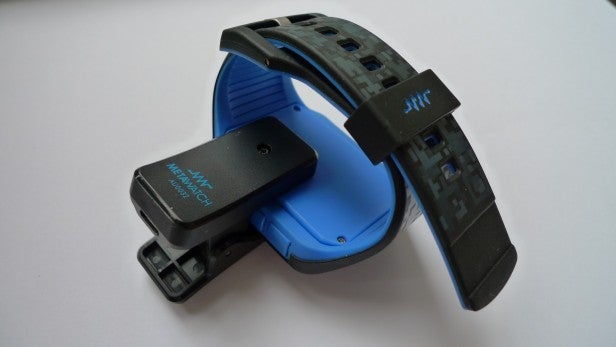 But what are these alerts? Much like the Pebble – which promised the earth but launched with limited service support – the notifications the Strata can deliver are a mixed bag.

The core supported services are accepting/rejecting incoming calls (with caller ID), SMS, emails, and calendar alerts. The handset can also display weather, replicate alarms and show routing information. In addition the Strata can play and pause music playback, which allows it to act like a remote control – useful if your handset is docked, you are swimming (or in the shower) or if your headphones lack dedicated music controls.

The caveats are there is currently no support for social media (though MetaWatch says this is in the pipeline) and to work with routing the apps need to be made compatible. In the case of routing this rules out Apple Maps and Google Maps at present (this should change with the expanded APIs of iOS7), but Telenav’s Scout app bales you out for now.

Meanwhile setup couldn’t be simpler. Since the Strata is a thin client, all management is done via official apps in the App Store and Google Play (Android version below). Install them, pair the Strata over Bluetooth and you’re ready to go. Customisation is easy. The MetaWatch has four homescreens divided into quadrants and each can be selected in the app to be filled by single, double (horizontal or vertical) and full screen widgets such as time, weather, email and so forth. 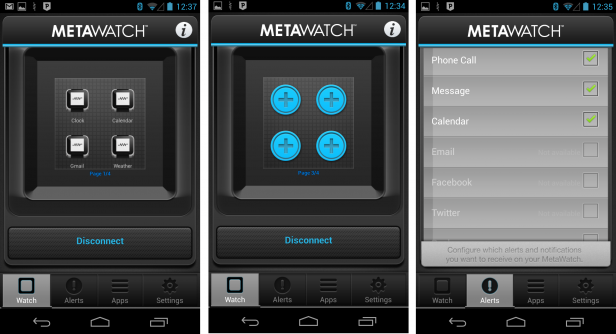 Interestingly because MetaWatch has open sourced its code there are also third party apps available. We found the most impressive to be ‘MetaWatch Manager Community Edition’ on Android which actually has more widgets than the official app (including dividing the screen into thirds) and greater customisation options. These include the ability to customise vibration types, download new themes, choose specific calendars and more.

We would like to see the official app offer support for these third party innovations (a kind of app store within the app) over time to tap into what seems to be a thriving developer community.

How this all comes together is somewhat hit and
miss, but the biggest point to stress is the huge potential of platform.
What the Strata does it does brilliantly though the experience can be
inconsistent and ‘potential’ inherently means there is a lot to be
realised.

First the good stuff. The Strata works wonderfully as a
proof of concept for the smartwatch movement as a whole. Many have
labelled the category a gimmick, but we found being able to see the
context of the notifications coming from the handset in your pocket or
bag to be extremely useful. 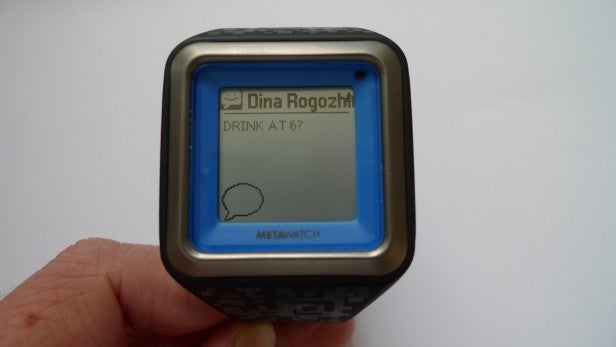 The
best of these are the core elements of calls, emails and SMS. Being
able to screen these while on the move is a joy and while it is easy to
miss vibration alerts from your phone you never miss one around your
wrist. Another useful aspect is keeping track of the battery life on
your phone and we were rarely caught out by setting off anywhere with a
low charge.

Furthermore while much has been made of smartwatches
giving you yet another device to charge we found it easily lasted the
working week. This is enough in our book to mean its usefulness isn’t
countered by regular charge cycles. This is particularly pertinent given
the Strata’s separate charge clip is bulky. A micro USB port with
rubber cap would be better for future models.

As for the impact a
constant Bluetooth connection on our phone battery life, it seemed
minimal (less than five per cent) and was more than counteracted by the
greater awareness we had of our phone’s battery life in general. That
said if your phone lacks Bluetooth 4.0 support older standards are less
energy efficient. 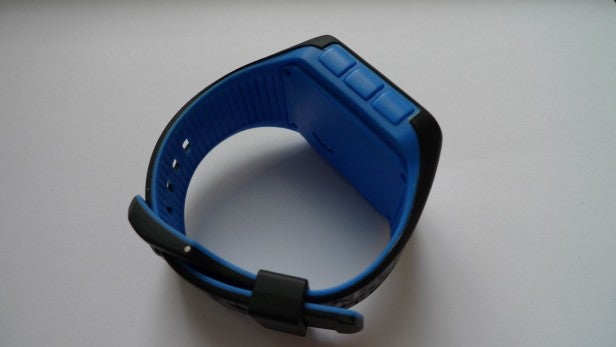 When
it comes to the bad stuff, this is where the area of ‘potential’ rears
its head. Social media and third party messaging systems (notably
WhatsApp) have largely replaced SMS and email for many and their
omission is significant. This is also true for third party mapping as we
found Telenav Scout didn’t work reliably for us and third party music
apps like Spotify and Rdio are also left out in the cold. Support for
exercise apps is also thin on the ground with the likes of RunKeeper an obvious target.

If
the potential of the MetaWatch platform and smartwatches as a whole is
to be met it cannot be left up to third party developers to code access
for each specific product. IOS, Android and other smartphone platforms
must produce the APIs to help.

There are interesting social side
effects too. While we found the Strata to be more convenient to check
than our phones it is arguably even ruder to keep looking at your watch
in a social situation. Again this isn’t the fault of the Strata, but it
is something society as a whole will have to get used to if smartwatches
and smart eye-wear are to gain traction. 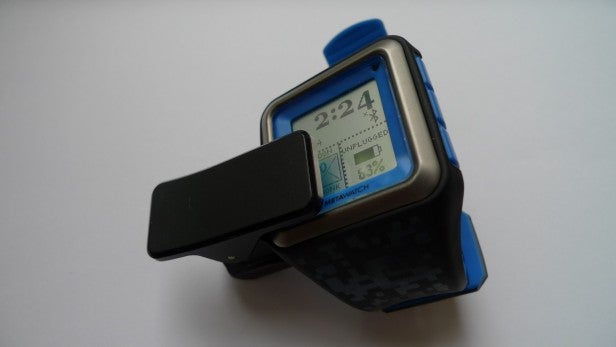 Should I buy the MetaWatch?

Potentially, yes. MetaWatch has recently brought down the price of the Strata from
$179 to just $129 (£83). This is a steal for the functionality, but
suggests after a long beta period that a new model is in the works. In
addition the Strata really does impact your day-to-day life for the
better. At the times when you feel most hassled by smartphone
notifications (rushing to work, carrying shopping bags, etc) it comes to
the fore as a real stress reliever.

We also find the Strata a better proposition than the MetaWatch Frame – at least on paper. The Frame is $199 (£129) and while slimmer has a shorter battery life (circa 30 per cent less) and is less water resistant, being at home only with splashes rather than full submersion.

That said in the context of
the wider market it may still be worth waiting. The much hyped Pebble’s $150
(£99) RRP means it will not be much more expensive at launch and with
everyone from Apple and Google to Samsung said to be entering the sector
in the not too distant future more polished products could be on the
way.

Then again this viewpoint feels tough on the Strata and
MetaWatch in general. The open source community should lap it up and its
restrictions are largely because of the current API limits in
smartphone platforms rather than shortcomings in MetaWatch’s nimble
platform. Whether MetaWatch will become the latest runaway success in
the tech sector remains to be seen, but it deserves to do well.

The
Strata is a hugely promising smartwatch debut from MetaWatch. The
asking price is low and its durability makes up for the somewhat
uninspiring looks. It is early days for the open source platform and
bigger fish will enter the market soon, but those of an adventurous
nature should open their wallets.