Available on Xbox 360 and PS3 (version reviewed)
Do you need a reason to feel excited about Metal Gear Rising: Revengeance? Well, here come two. Firstly, this is the first all-new Metal Gear game to hit a home console in nearly five years, and while this one has a different star, a different genre and even a different developer, it’s still been made under the auspices of Kojima productions, and it still carries the hallmarks of the Metal Gear saga. Secondly, there’s the matter of that external developer. Revengeance is the work of Platinum Games, the team behind the underappreciated sci-fi shooter Vanquish and the masterful Bayonetta; still the finest hack and slash action game to appear in this generation. 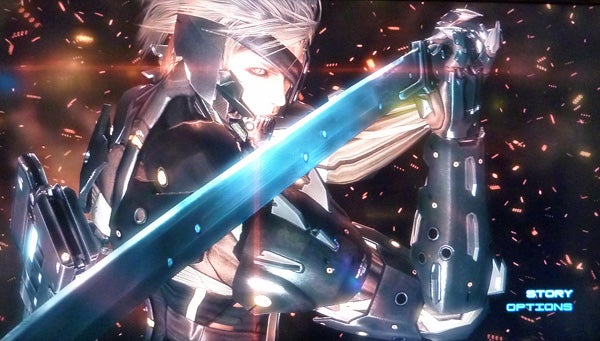 Metal Gear meets Bayonetta
That’s important, because Metal Gear Rising: Revengeance is nothing if not a hack-and-slash action game. Stealth and espionage are out of the window along with regular Metal Gear hero, Solid Snake, with the action now focused on impressively violent swordplay and the hero role usurped by Raiden, the surprise star of Metal Gear Solid 2. The Metal Gear series has already seen Raiden transformed from ashen-haired newbie operative into a deadly cyborg ninja killer. Revengeance takes that process one step further, taking Raiden down his darkest road yet. 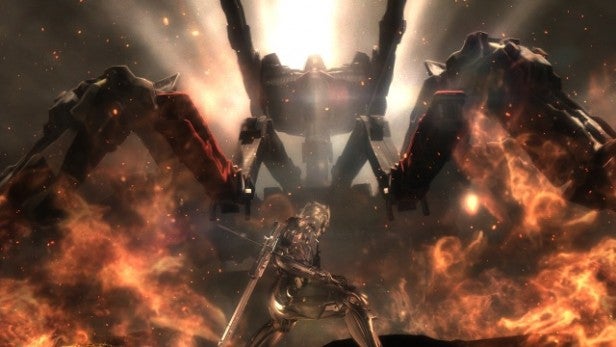 The game opens with an attack on the head of a progressive African state, and Raiden’s brutal and disfiguring defeat in combat. It then tracks Raiden through operations in Eastern Europe, Mexico and Colorado, as he investigates the shadowy dealings of a military corporation and its cyborg agents. The story isn’t quite as complex or twist-heavy as your average Metal Gear Solid, but all the signature elements are there; the eccentric bosses, the carefully planned set-pieces, the surreal sense of humour. Want endless radio chatter between the hero and his back-up team? Lengthy ruminations about peace, the lives of henchmen or the nature of a killer? Cardboard boxes? You’ll get it all here. 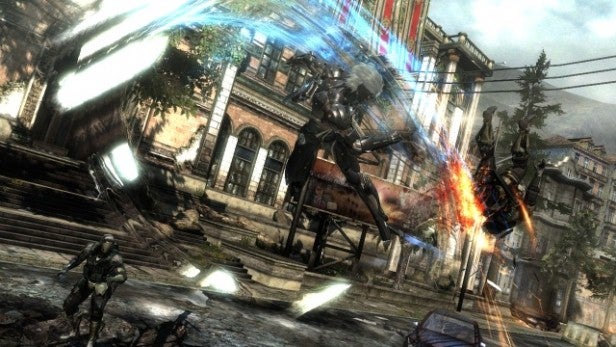 Block and Counter
Meanwhile Platinum brings its own unique talents to the table. Platinum’s genius has always been in stripping the mechanics of a genre down to their raw components, then reconstructing them in weird and wonderful new ways. For an example, just take how Bayonetta took the combo-based combat from Devil May Cry and reworked it into an exquisite blend of creativity and timing, or how Vanquish grabbed the slow-moving cover-shooter and completely transformed it with high-speed motion. Revengeance takes the same approach to how you hack, slash and block, with a smart system of inter-related mechanics that merge into some very satisfying combat.

Button-mashing will get you approximately nowhere. First you need to master the block, engaged by pushing the pad towards your enemy at the same time as tapping the quick attack button. Blocks keep your enemies on their toes, and allow you to lash out with flurries of quick and heavy attacks. Keep the R1 button pressed and Raiden goes into ninja run mode, dodging incoming ranged attacks and some of the heavier attacks from giant combat mechs, while dishing out his own rapid-fire slash attacks. 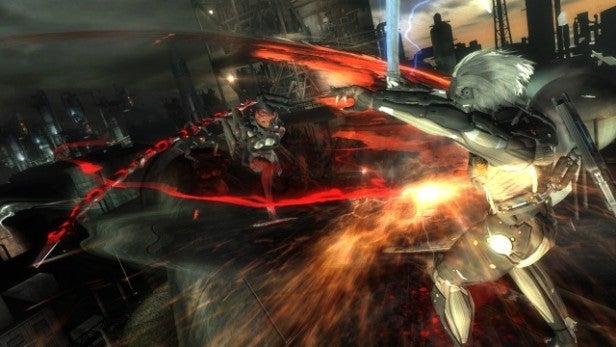 The joy of Zandatsu
The best bit, however, is what the game calls Zandatsu. Build up your sword’s energy guage and you can trigger a slow-motion Blade mode, where you can position each horizontal or vertical slash with incredible accuracy. At this point weak points and gaps in armour will be highlighted, and by slicing through a certain point you can pull off a cut-and-take manoeuvre, slashing right through your enemy’s body and tugging out a pulsing blue organ, which Raiden then crushes to recharge his health and energy.

Common or garden Zandatsu happens on the ground, but hits its most spectacular when Raiden weakens the toughest enemies and gets the chance to execute a special move. If you wanted a game where you got the chance to literally slice your foes into bits, or where you can swoop down on a giant mech before ripping out its robot guts, then here it is.

There’s a whole lot of slashing, slicing and dicing in Revengeance. Certain doors, fences, obstacles and parts of the scenery can be slashed into geometric chunks, and there are even tactical possibilities, allowing you to take out columns to bring high-up enemies down to earth. Being picky it would be nice to see more objects sliceable – there’s an odd disconnect where a fence goes down when a shop window doesn’t – but a game where everything can be slashed apart is probably a bit too much to ask. 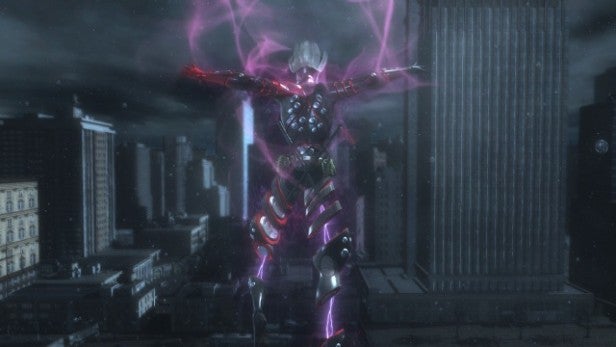 There’s no question that the core combat in Revengeance is satisfying. Fights are tense and exciting, and Zandatsu makes for some fantastic moments of slice-and-dice catharsis, particularly when you’ve tackled a horde of enemies or a really challenging foe. Revengeance has boss battles as big and epic as you would expect to find in a Metal Gear game, and it’s nothing if not inventive in its ultra-violence.

Depth and Difficulty
Unfortunately, however, this isn’t quite Platinum’s best work, or up to Metal Gear’s normal exceptional standards. The level design is very linear, and there’s little on offer bar a chain of encounters and the odd ‘use your cyborg vision to find the hidden panel’ puzzle. There’s some depth in cyborg armour modifications and unlockable weapons and moves, but not a huge amount. The camera is also far from faultless, struggling to keep enemies in frame and making it very difficult to deal with fast-moving enemies – fatal in a game where timely parries are all-important. 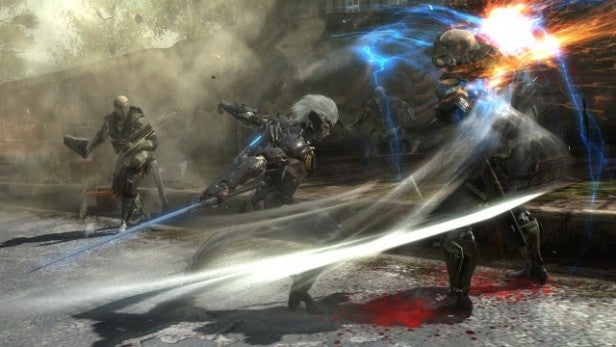 What’s worse, the difficulty curve is all over the place. After a breezy first hour you’ll come across a boss battle so infuriating that, if you haven’t mastered blocking by that point, you’ll be tempted to give up and move on. Push through, and you’ll find this is just the start. Epic boss battles, hard-to-block special moves, cheap ambushes and insta-fail action sequences are very much part of the Revengeance routine, and can turn a game that is great fun to play into something less awesome. Some would say that they wouldn’t have it any other way, but unless they play on the pitifully challenge-less Easy mode, less hardcore gamers will find Revengeance something of a struggle.

Pounding Metal
We also have to quibble about some of the stylistic choices. Like DmC: Devil May Cry, Metal Gear Rising feels no big action sequence is complete without a pounding metal soundtrack, but here the music sometimes gets a bit ridiculous. A handful of cut-scenes seem to go on for ever, and while there’s definitely a place to debate violence and the effects of within games, doing do in a game where the whole point is slicing people – albeit cyborgs – into bio-mechanical chunks might not be the best place to do it. You can see what the makers are trying to do, but it isn’t quite working. 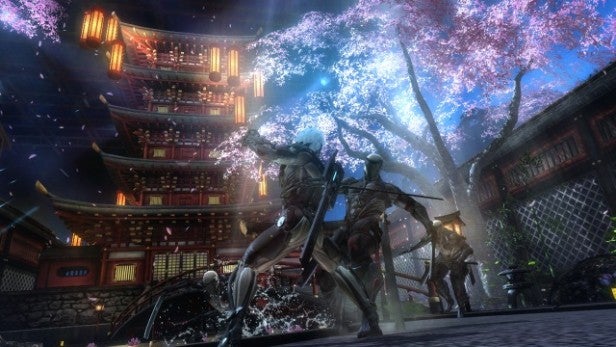 But let’s not get too negative. This is, in its own distinctly Japanese way, an absolutely gorgeous action game. In terms of sumptuous effects and lavish detail it’s not up there with DmC: Devil May Cry or God of War: Ascendance, but the slashing-things-to-bits stuff looks absolutely amazing and you can’t say the set-pieces lack spectacle. It has a reasonably lengthy campaign and a degree of replay value, with harder difficulty levels unlocking to give those in need of more challenge excactly what they want. Overall, though, Revengeance suffers in comparison to the artistry and imagination of the recent DmC, and even in comparison to Platinum’s own masterpiece, Bayonetta. It’s smart, brutal and addictive, but not quite polished enough to be a classic.

Verdict
Mixing Metal Gear style with a unique take on hack-and-slash swordplay, Metal Gear Rising: Revengeance is a must for the more hardcore action gamer. Be warned, though, that it can be extremely challenging, and with an occasionally dodgy camera and cheap enemy attacks, unfairly so. We love a spot of Revengeance, but it’s not quite up to the standard of Bayonetta or DmC: Devil May Cry.