Shuttle deserves a lot of credit for almost singlehandedly bringing the Small Form Factor (SFF) PC to the mass market. From fully-assembled systems to excellent chassis like the XPC Prima SP45, its name has become synonymous with small, well-built computers. However, they aren’t exactly the most affordable options and if value is a major criterion, Mesh looks set to make a large impact with its small Cute. For a mere £399 you get a fairly powerful machine including a dual core Athlon II processor, 2GB of DDR2 RAM, integrated Radeon HD graphics, a 320GB hard drive, and best of all a Blu-ray drive and dual digital tuner card plus Windows Media remote, all packed into a relatively tiny box measuring no more than 300 x 200 x 165mm. 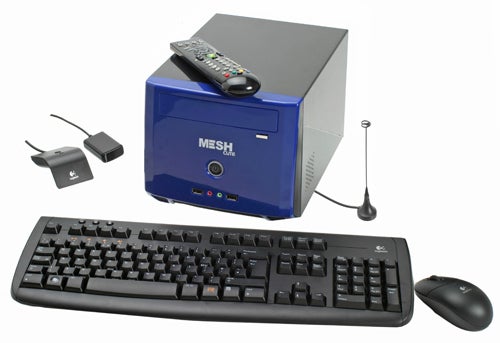 It seems a little too good to be true, especially since (at the moment) for an extra £25 you can get to a similarly-specified model except with 4GB of RAM and a 500GB hard drive. At first glance, Mesh certainly appears to have filled the gap between high-end SFF systems like the Ultimo Nano and cheap Atom-based miniature desktop systems (or ‘nettops’) like Acer’s Aspire Revo R3600. But how does the Cute actually hold up?


Taking the unit out of its box reveals a very neat case, with only one single set of discrete vent perforations about 5cm across on the right. The main steel body, finished in an attractive though fingerprint-loving black lacquer, feels incredibly solid. 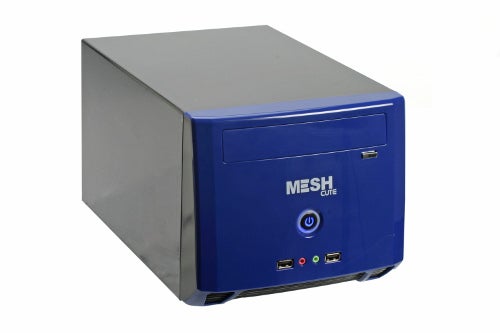 Unfortunately the plastic front doesn’t feel as strong, exhibiting some flex and give. It’s available in various colours, including white, red, and the blue of our unit. We’d recommend you stick to the default black though, as the colour implementation here makes it look like two separate halves were randomly stuck together. After all, just because the Cute is cheap doesn’t mean it has to look it.


Nestled into the plastic front’s centre is a power button with a blue-backlit power symbol, but unfortunately Mesh has committed a bit of a design faux-pas by surrounding this with a semi-transparent white ring that lights up in red when there’s hard drive activity. As the Hyundai BlueH HM22D proved, blue and red are not lighting colours you want to mix.

None of this is helped by the front headphone and microphone jacks, which are the traditional green and pink rather than silver as on many classier-looking machines. At least the only other bits marring the front are two USB ports and the chromed optical drive button.


Speaking of the optical drive, this leads us to the Cute’s biggest build-quality concern. After a while the Blu-ray drive started struggling slightly to open the blue plastic drive cover. Worse still, the flimsy cover usually stayed open after the tray had retracted, showing off its cheap, unpolished underside and forcing you to close it manually.

Around the back of the Cute there’s an unusual 70mm fan vent, a single expansion slot which is taken up by the TV tuner, and a fairly generous selection of connectivity courtesy of the J&W 780 Mini-ITX AM2+ motherboard. This consists of a PS2 mouse connector, Gigabit Ethernet port, six USB connectors and an eSATA port, video outputs in the form of VGA, DVI and HDMI, and both digital (co-axial and optical) and analogue audio outputs for a variety of 7.1 surround sound options – certainly no complaints here.


Undoing three cross-head screws gives you access to the chassis. Surprisingly it is quite roomy inside, leaving the single 16x PCI Express slot (which can take a discrete video card as long as it’s not full-length, full-height or double-slot), CPU and RAM within easy reach. On the topic of RAM, it’s well worth going for the 4GB upgrade when you buy as the Cute’s motherboard uses more expensive laptop memory, and in the 2GB configuration both slots are filled leaving no room to upgrade. 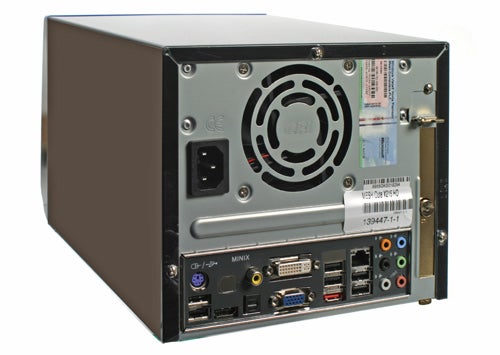 The case allows for reasonably good airflow, but unfortunately its unbranded 70mm cooling fan isn’t exactly quiet and though never acutely annoying, the Cute can get noisy during use. It’s a great shame as this single factor will probably dissuade many from choosing Mesh’s compact and affordable system as a Home Theatre PC (HTPC).


The small fan is even more puzzling when you consider that there’s plenty of room to install a bigger one, so those who aren’t afraid to get creative with a dremel can alleviate the issue – not that the Akasa CPU fan and tiny motherboard cooling fan aren’t somewhat on the loud side too, despite the temperature inside the case staying nice and cool even when under load.

Examining the PC’s specifications in more detail, Cutes come with an AMD Athlon II X2 215 dual-core CPU as standard, which runs at 2.7GHz and sports 1MB of cache. This can be upgraded to a 3.1GHz Phenom II 550 Black Edition with 7MB of cache, though only in models that don’t allow discrete graphics. As is, the 215 gives more than enough performance for anything the rest of the system can handle.


A 320GB drive takes care of storage, which again can be upgraded all the way up to a 1TB model on Mesh’s website for £30. The Blu-ray reader is a Lite-On model that won’t handle HD-DVD (as many such drives do), though of course it will write to DVD. Both the optical drive and hard drive are standard desktop models, and therefore easy to replace.

The Cute features integrated AMD graphics in the form of an ATI Radeon HD 3200. While it does a fine job for Blu-ray and HD video, this card is not powerful enough for anything but older games, as the Call of Duty test shows (where the Cute managed an unplayable 15 frames per second at 1,280 x 720). However, on higher-end Cutes you have the option to upgrade to a discrete Radeon HD 4550 card. Oddly enough, selecting this option doesn’t grey-out the TV-tuner option, when in fact such a combination is impossible with only one PCI-Express slot.

In addition to the Logitech 660 Wireless desktop set Mesh bundles with most of its PCs (which we’ll look at in a bit) you’ll find a Kworld TV-tuner box that contains a fairly decent glossy black Windows Media Center remote and discrete black USB IR receiver. The tuner itself is a dual-DVB-T model that lets you watch or record two digital channels simultaneously on your computer, and comes with ArcSoft TotalMedia software.


While they do the job, the matte black keyboard and mouse aren’t anything exciting. The keyboard has noisy keys and uncertain feedback, while the ambidextrous optical mouse is likewise not the most comfortable rodent around – though its buttons offer a nice click and the four-way notched-feedback scroll-wheel is pleasant to use. The set’s USB RF dongle is rather large so you’ll want to hide it at the back of the Cute. 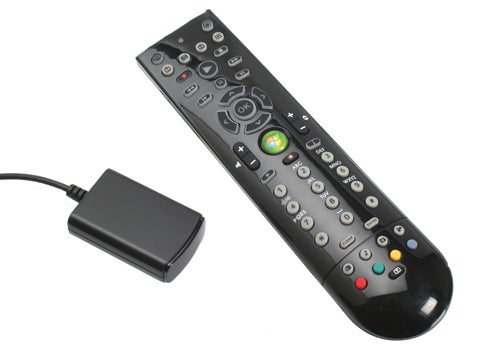 On the software front, the Cute comes with the 64-bit version of Windows Vista Premium so you’ll be able to make full use of the 4GB of memory if you do upgrade. For Blu-ray playback, meanwhile, Mesh provides CyberLink’s excellent BD Suite, while for productivity you get a trial version of Microsoft’s Office and free version of Works 8.5 SE. Aside from a trial version of BullGuard Security, the rest of the PC is left clean.


Overall, the £399 Cute has all the ingredients for a great value HTPC (or – minus the tuner and Blu-ray drive – small office PC). It’s a reasonably powerful system in a SFF chassis with a Blu-ray drive, HD-decoding video card, wireless peripherals, TV tuner and Media remote, all while staying below 120W of power usage even under heavy load. However, it’s let down by being rather noisy, and issues like the cheap-looking coloured plastic front (unless you opt for black) and malfunctioning optical drive-bay cover mar the experience further. 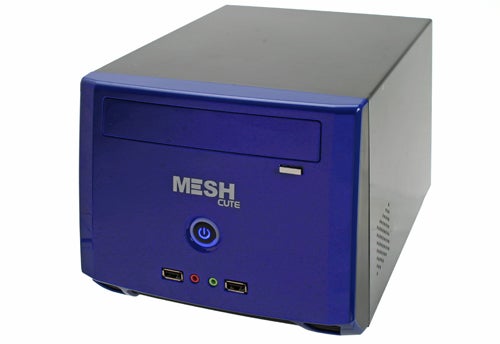 
Mesh has produced one of the best-value small form factor PCs around with the Cute, but the audibility of its cooling and a few other niggles prevent it from coming recommended.