You’ve got to love battling robots – but battling robots that look like mechanised spider crabs is some next-level geek Nirvana. MekaMon has been developed by Reach Robotics, with each set including a single app-controlled mechacrab that can be customised and upgraded.

Thanks to an AR mode, battle can be joined against virtual opponents, or multiple mechs can be pitted against each other. One mode is more successful than the other, though – and the price of entry is an eye-watering £300/$300 per robot. 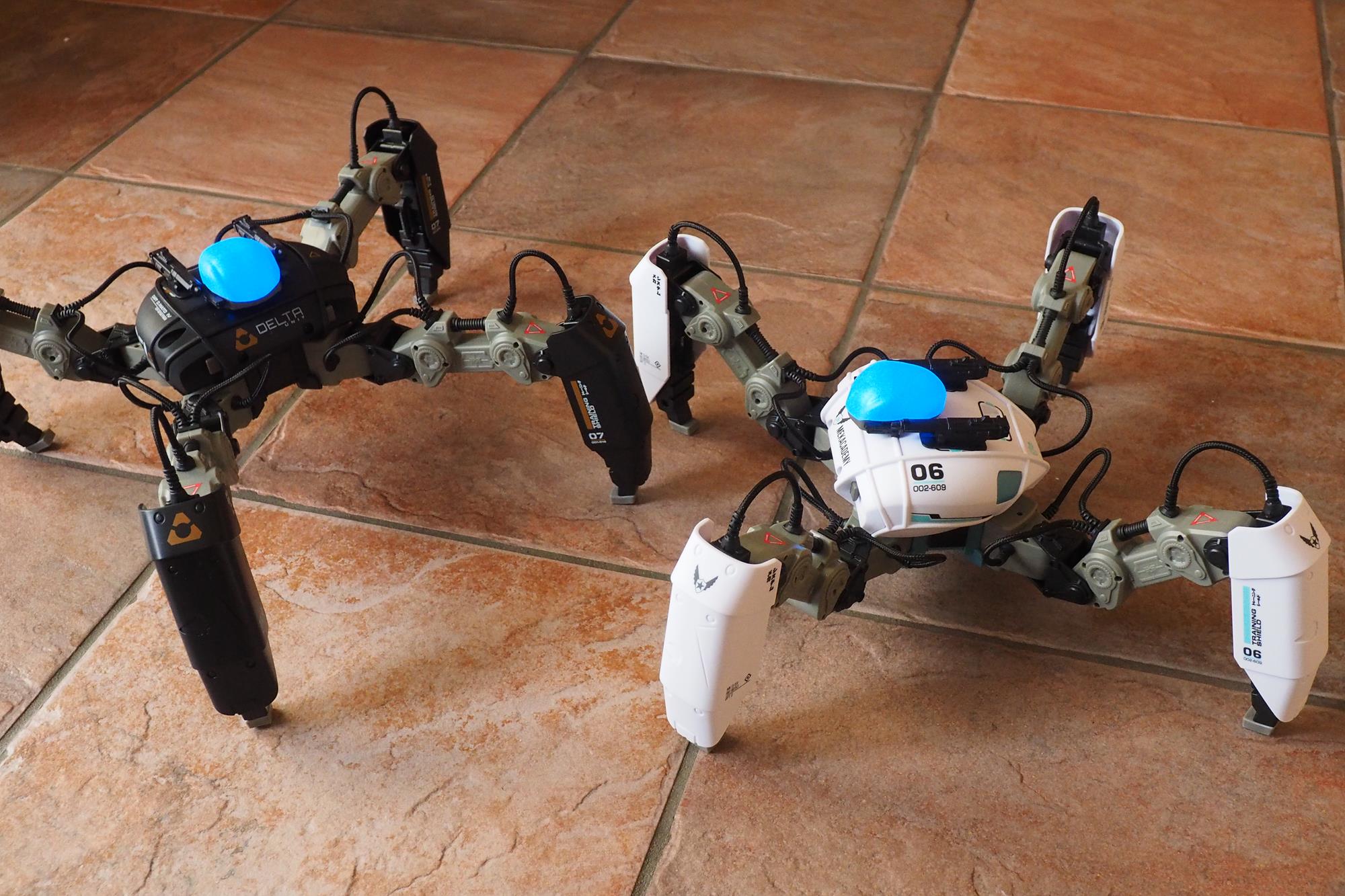 MekaMon – What do you get?

Inside each MekaMon kit, you get just one MekaMon Berserker robot – available in white or black, sporting slightly different markings, but the same modular design. The central unit really is like a crab’s carapace, albeit with a blue LED-lit dome on top, like a tiny cockpit. The four legs lock into place, as does the rechargeable battery.

The idea is that, eventually, you’ll be able to upgrade your Berserker with new weaponry and armour. However, the basic load-out comprises a pair of small cannon that click into ports on the top, and a set of beefy shin pads that click onto the legs. This gives access to two loadouts, called the ‘Control Deck’ and ‘Aggro Deck’. The deck that you equip before going into battle dictates which virtual weaponry you can deploy, although even that can be customised a little within the app. 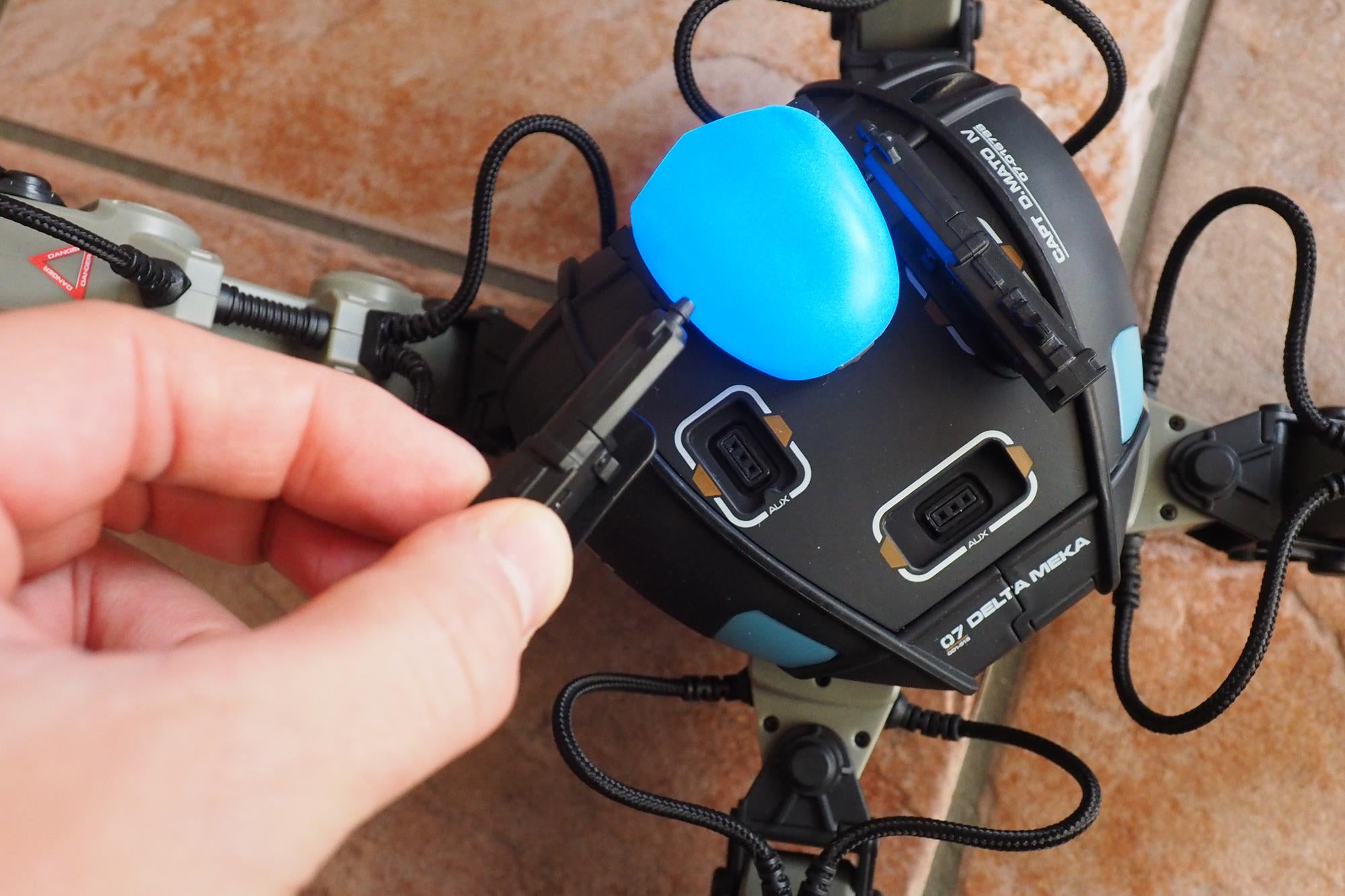 Aside from the battery charger, the only other item in the box is a patterned neoprene mat that’s required for the single-player augmented reality mode.

The final part of the equation is the free-to-dowload MekaMon app, which is predictably available for Apple iOS and Android devices.

MekaMon – How fun is it to use?

I slotted the battery into a MekaMon Berserker and it immediately started lurching about, the servos in its spidery legs whirring. I launched the app, quickly worked out how to connect to the mech, and then sat patiently through a hefty firmware update. This seems to be almost inevitable with app-controlled products these days.

With the update applied, I really just prodded around the app, not sure where to start. It could do with a guide on first opening it to show you what to do first. Sadly, it just leaves you to work out what’s what. As a result, I ended up going straight into an AR battle when I really should have gone into the ‘Dropzone’ to get my Berserker set up properly and have a chance to get used to the controls.

Unsurprisingly, my first experience with MekaMon was frustrating. Things improved, though, so bear with me. 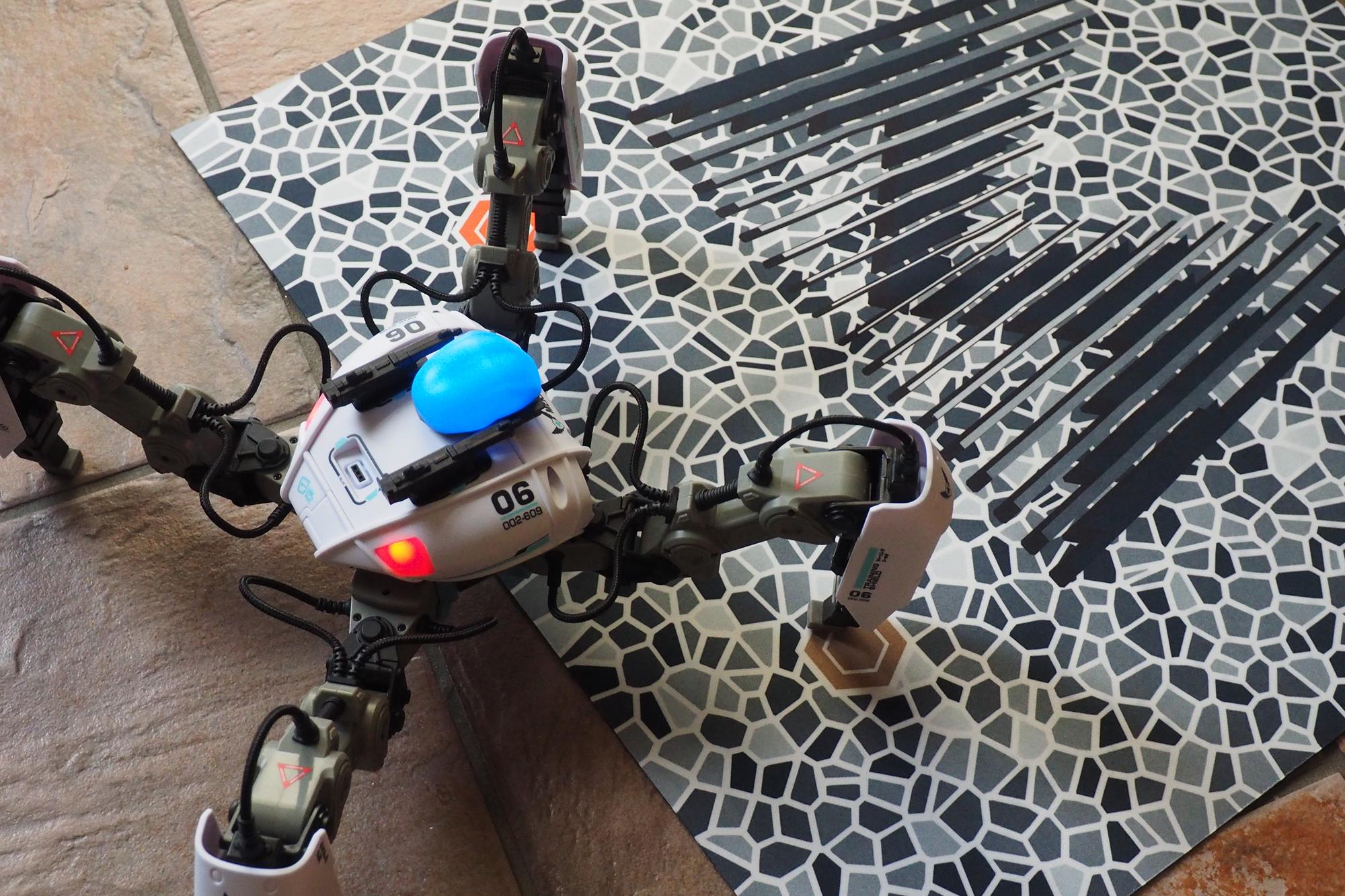 In the AR battle simulator, you have to concentrate solely on the screen of your mobile device. Enemy mechs and buildings appear alongside your real-life robot, with the supplied mat acting as a guide for the app to place the virtual items correctly in the scene. The first problem I had was that one of my fingers was blocking the camera on my phone whilst I was using the on-screen controls – at least until I changed my grip to a less comfortable one.

The next issue was that my robo-crab clearly wasn’t set up for thick carpet, so it struggled to pick up its feet enough to move freely. It also kept rucking up the mat, so I had to straighten it all out while I was being shot at. 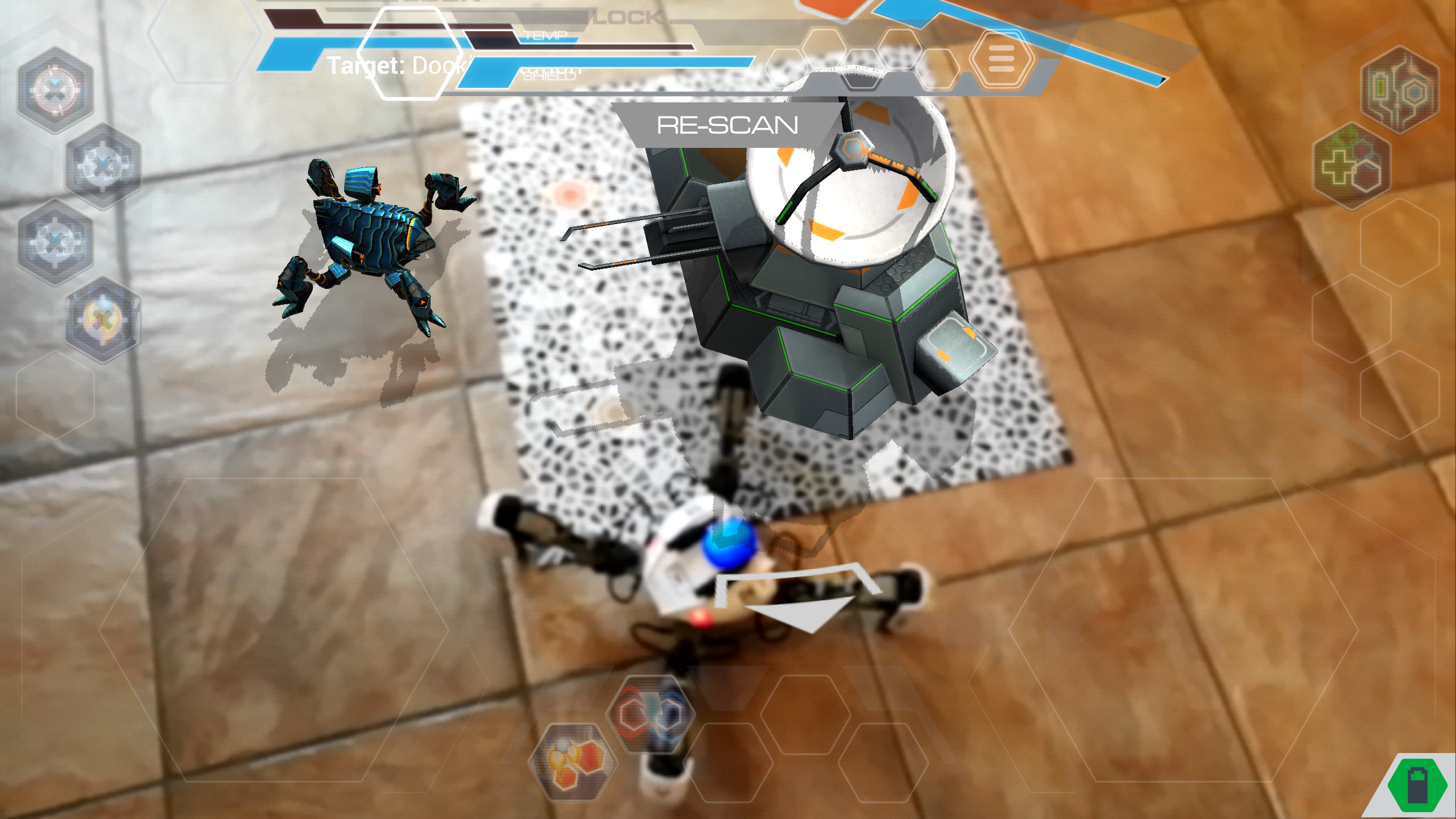 Adding to my growing frustration was that, despite the tutorials explaining the controls, I was still a little bewildered by the three separate arrays of ever-changing buttons around the edge of the screen. The left one is for weapons, the bottom one for buffing or hindering your opponent, and the right for defense or healing, helping to restore shields or lower operating temperature.

But some of the weapons disappeared when I fired them once. Hmm. I would’ve tried to work out why, but I was a little distracted by virtual mechs trying to take me down, and my Berserker tripping itself over the folded corner of the neoprene mat.

To be honest, it was a relief when I was defeated and taken back to the main menu.

This time I discovered the Dropzone, where I was able to tweak a load of settings to get my mech moving far better. There was even a preset for use on carpet, which gave me a decent starting point. I just had to increase the step height to maximum because of the thickness of the pile on my particular carpet. Suddenly the Berserker was moving in the direction I pointed it, turning and sidestepping quite nicely. Even when set to ‘trot’ rather than ‘crawl’, I wouldn’t describe the movement as scuttling so much as stalking. It was faster and turned more accurately on my kitchen tiles, but attempts to ramp up the speed just made it struggle for grip. It definitely pays to experiment.

Gameplay is split into two sections: MekaMon Universe and MekaMon Arcade. The former is where you’ll find the AR battle simulator and multiplayer battles. 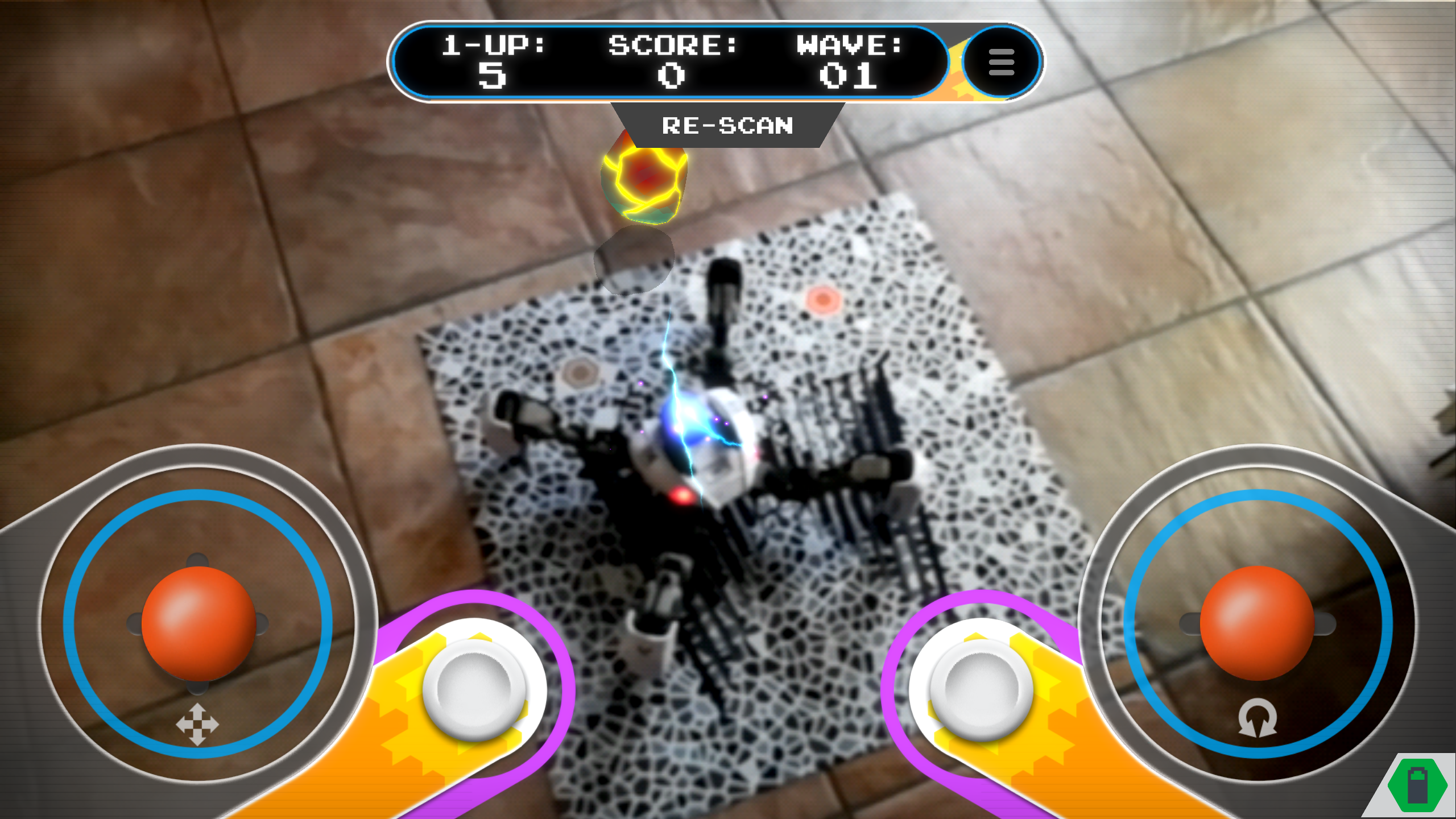 The Arcade mode is a simpler AR mode that provides a much better entry point – once you’ve tuned your mech’s movements, of course. You’re given the same pair of D-pads – one for forward/backward and sidestep, and another for turning – but just a couple of simple shoot buttons. In the first game, Meteoroids, your mech starts on the mat and rocks float towards it from different directions. It’s simple but quite fun for a while – as long as you stick your mat down to the floor with some double-sided tape.

I dug around the details of my weapons loadout properly before heading into another battle in the MekaMon Universe. The weaponry descriptions explained some issues I’d had with controlling my mech: ‘Limb Shot’ hampers the opponent’s movement for a certain amount of time. Watch out for what you use, though, as each weapon generates a certain amount of heat, and filling your heat bar causes your Berserker to shut down for a while – time in which an enemy can blast you, unopposed. 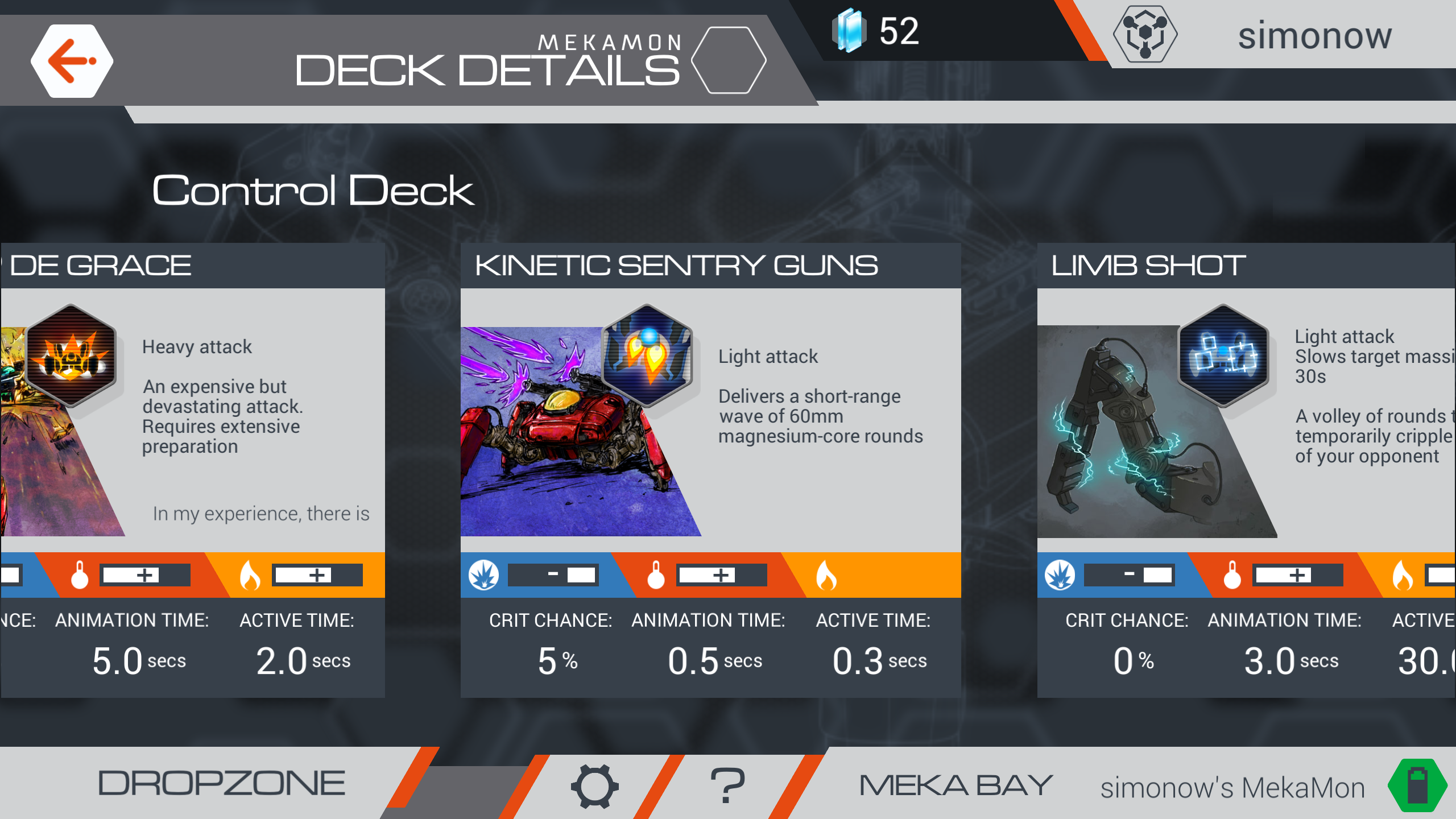 Even with the controls and movement sorted, and the mat secured to the floor, I still found the AR modes a little disappointing. You’re looking entirely at the screen of your phone or tablet, which means the physical robot might as well not even be there – you might just as well be playing a proper mobile game. My phone camera didn’t seem to want to focus properly, either – as you can see from the screengrabs – which made the experience even flatter for me.

Adding another Berserker for some multiplayer action makes things more fun. You can also introduce obstacles in your battlefield – the odd box or a few cushions will do. The mechs use infrared to fire and sense when they’re being fired upon, so whenever they don’t have line of sight with an opponent, the weaponry buttons are blanked out.

It all feels a little more tactical when you’re not constrained by the size of the battlefield and don’t need the mat. I still struggled to work out why some weapons and functions were available one moment but not the next, though. The system seems to be needlessly complicated, or perhaps just doesn’t do a good enough job of communicating what’s happening between the battling mechs.

It will be interesting to see how forthcoming add-ons affects the balance of play. Hopefully, it won’t be long before Reach Robotics starts selling some.

In an ideal world, you’d also be able to assign AI control over a physical mech, so you don’t have to rely on the AR mode for single-player action. I’m told by Reach Robotics that this is something they’re working on, which is great news. 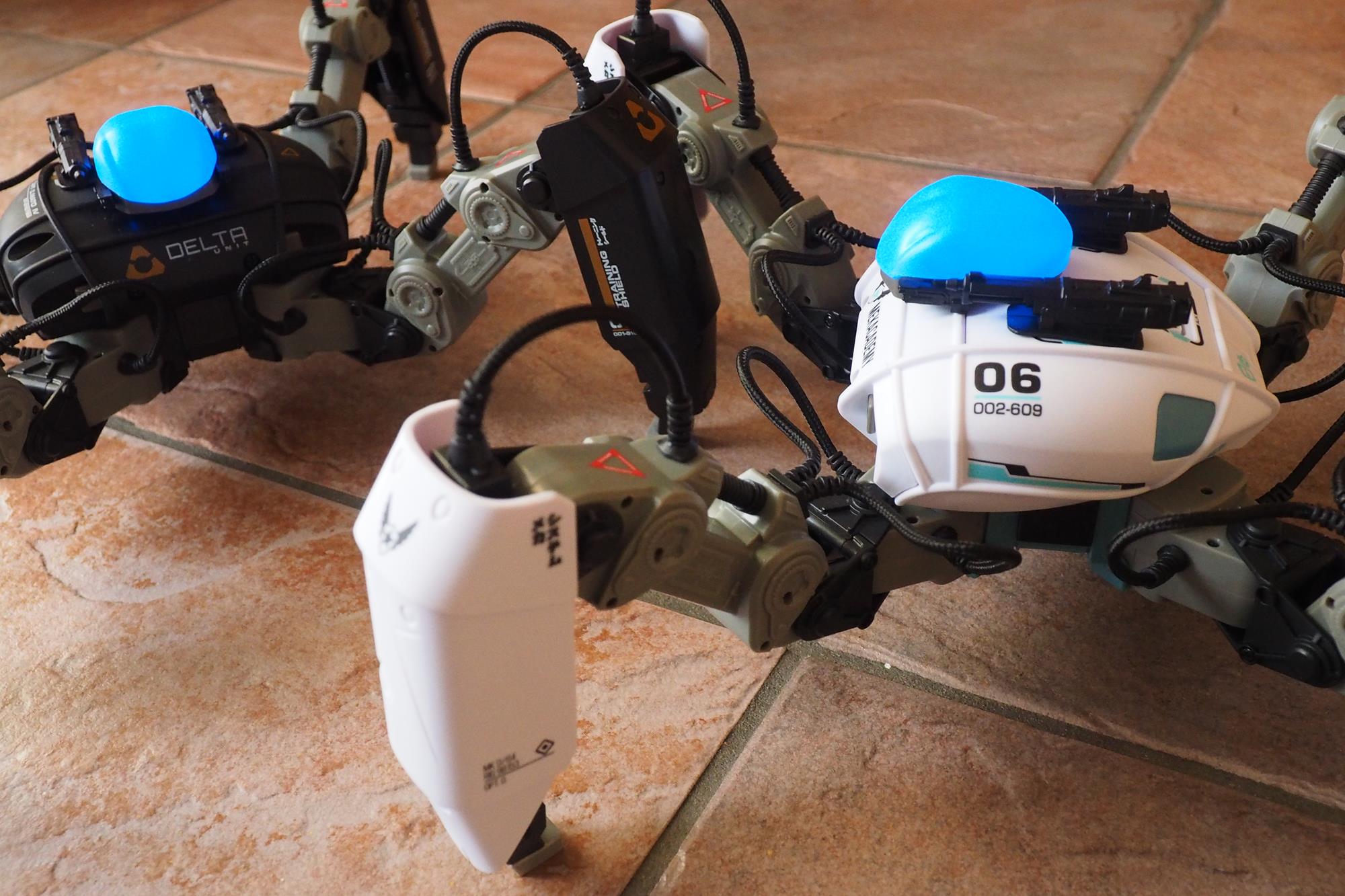 The MekaMon robots certainly look the part. And once you’ve tuned their movement to your floor surface, they crawl around in a satisfyingly super-creepy way.

The augmented reality modes are a little dissatisfying and frustrating, which is a big deal considering that’s all you can play with one MekaMon pack. That’s £300/$300 you’re paying to stare at your cool, expensive robot on a phone or tablet screen…

As a multiplayer experience, MekaMon is much more successful – but it’s an awful lot of money to fork out for multiple mechs. Pricing for the additional upgrade packs hasn’t been announced yet, either. I can only hope it doesn’t make the pricing for  the MekaMon seem more prohibitive than it already is.

A robot gaming system that can be quite fun once you get the hang of it – but the cost per mech is too high.