While devices like the iPad 2 and Windows tablets such as the Samsung Series 7 Slate 700t allow you to game on the go, they’re not machines
made for ‘proper’ gaming and don’t have the power to run the latest titles in
all their glory. If this is something you’re after or you just want to be able
to move your gaming rig about easily, a gaming laptop is the best solution.
We’ve seen some laptop bargains from Medion in the past, but this is the first
time we’ll be looking at one of its gaming laptops: the Erazer X6813.

On paper, this beast has it all. The MD97762 version of the X6813
crams a Full HD resolution into its 15.6in screen, while its
brushed-metal-effect chassis packs a quad-core Sandy Bridge Core i7 processor,
8GB of RAM, a fast 750GB hard drive, Nvidia GeForce GTX 460M graphics and a
Blu-ray drive. And that’s in addition to niceties like an integrated subwoofer,
nine-cell battery, analogue surround sound jacks, USB 3.0, Bluetooth 3.0 and
eSATA.

Overall a pretty impressive specs and features list
then, but it’s not nearly as impressive as the £900 price Medion will sell it
to you for. Considering similar configurations from other brands will easily
set you back £1,200 or more, it would appear to be a bit of a bargain. So will
this Erazer be the best portable gaming deal since the MSI GT680, or have a few too many corners been cut? 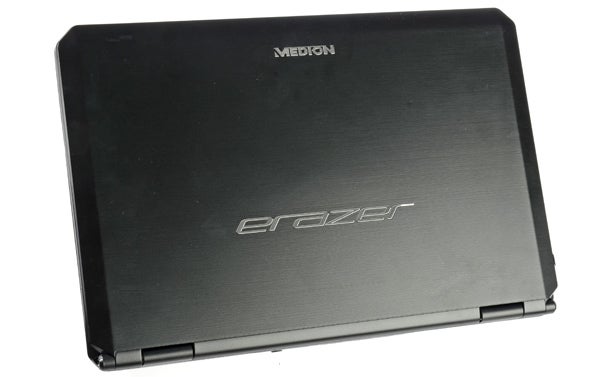 Design certainly doesn’t betray budget roots. Inevitably
chunky, as all powerful gaming laptops are, the Erazer X6813 has some
attractive angles and a matt, brushed metal-look plastic lid subtly emblazoned
with the chromed Medion and Erazer logos. This finish not only prevents
unsightly fingerprints, but is also a little more rugged than the glossy
finishes found on many rivals (including the MSI).

The angled lines of its chassis remain consistent
throughout the Erazer’s design, extending to a media bar above the keyboard and the
touchpad’s buttons. The brushed plastic finish continues on the inside, with
glossy strips demarking the screen and keyboard. Bling is kept to a minimum,
with only some blue floodlights shining onto your desk from the laptop’s front
edge – and if you’re not too fond of these, they can be turned off at the touch
of a dedicated button. 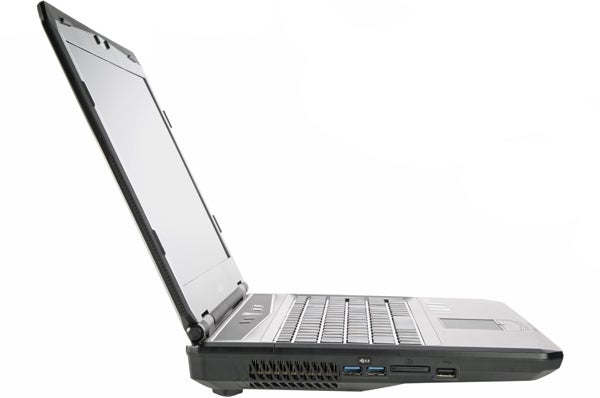 Build quality is also very good, and though not quite on a
level with more expensive rivals like the Dell Alienware M14x or Asus ROG G73Jh, this still puts the Erazer miles above some of the cheap chassis
we’ve seen from the likes of Clevo in the past.

Connectivity on the Erazer X6813 is top-notch, if not quite
best in class. Along the left you’ll find three USB ports, two of which are of
the latest 3.0 variety. The SDHC memory card reader doesn’t support the newer
SDXC format, however, which is a minor annoyance. The right side, meanwhile,
houses four 3.5mm audio jacks for microphone and full analogue surround sound –
handy for those with cheaper 5.1 speaker systems. There’s also a second USB 2.0
port and the tray-loading Blu-ray drive, a great addition that’s often missing
from ‘affordable’ gaming laptops. 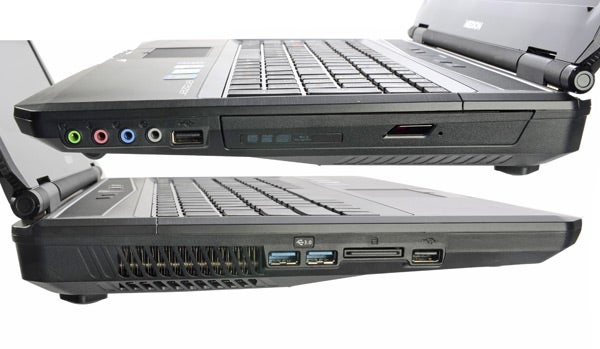 Around the back we have Gigabit Ethernet, VGA and HDMI 1.4
for video, and a dedicated eSATA port to hook up fast external storage that
might lack USB 3.0 support. Bluetooth 3.0 is yet another rare inclusion on a
sub-£1,000 mobile gaming PC, and it joins Wi-Fi N in completing the Erazer’s
wireless credentials.

Keyboards haven’t been the strongest aspect of past Medion
laptops we’ve looked at, and while that still holds true, the chiclet keyboard
on the Erazer is perfectly usable. Layout is spot-on, with full volume and
brightness controls on the cursor keys and a full number pad. Travel is
somewhat shallow but the well-spaced keys still offer adequate feedback.

There’s no large Enter key as we’re used to on most UK keyboards,
and there’s a bit of audible rattle from keys on the left side. There’s also
some mild flex, and both of these issues affect the WASD area most
specifically, where ideally it would be the area they would affect least – if
they were present at all. One nice gaming-specific touch is a dedicated button
to deactivate the Windows key.

Thankfully we have no complaints with the touchpad. It’s a
tad on the small side but is clearly delineated, and its matt, lightly textured
surface is pleasant to the touch. It’s also sensitive, doesn’t interfere with
typing and, though its aggressively-shaped buttons are integrated into a single
rocker switch, they offer a positive click with no noticeable stiffness. 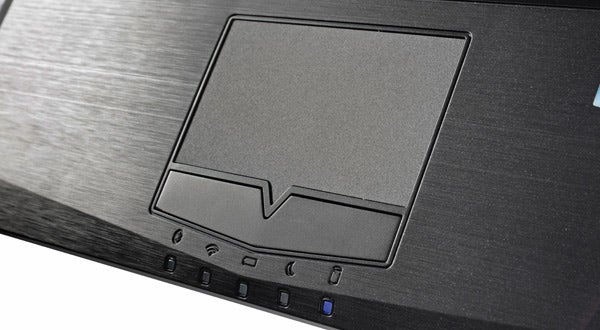 We were hoping for good things from the Erazer’s audio, as
there’s plenty of chassis to play with and the stereo speakers are supported by
an integrated subwoofer. Unfortunately it was merely average, lacking in
clarity and depth, with a little distortion creeping in at high volumes. The
subwoofer punches with all the weight of a stick-figure, leaving bass muted and
slightly muddy. Still, this failing is easy enough to circumvent with a decent
set of headphones or speakers.

The Erazer X6813’s screen ensures you’ll get a lot of
enjoyment out of movies and games – as long as you sit at the right angle, that
is. With 1,920 x 1,080 pixels (Full HD) stuffed into its relatively small
15.6in area, everything looks incredibly sharp, and it gives you plenty of
desktop area to play around in (though you may have to zoom in more
frequently). However, unlike the same resolution crammed into a 13in display -
as is offered on the Sony VAIO Z for example – here it’s generally very usable and actually makes
sense. 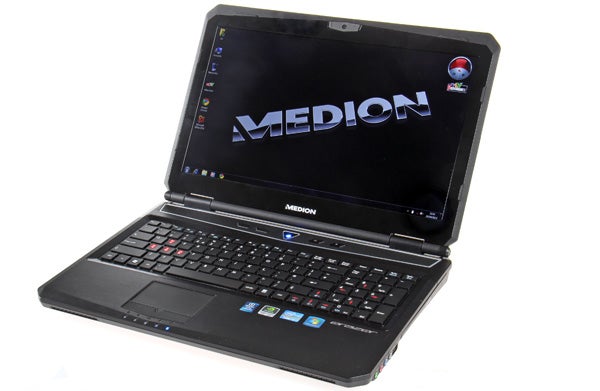 Other good points include even backlighting with no
distracting bleed, and excellent black differentiation, ensuring you’ll see all
the detail in dark games and movies. We also didn’t notice any unpleasant
artefacts to ruin the party. Unfortunately, mediocre viewing angles, plus a
lack of colour vividness not ameliorated by the screen’s glossy coating, hold
it back from being an overall winner. We do hope that matt displays make their
way into more gaming machines as they currently seem to be doing in the
consumer market (like on the Samsung Series 7). Still, with price once more in mind, this Medion’s screen
falls firmly into the ‘good enough’ category.

Obviously, the graphics card is the single most important
element of any gaming machine, and especially important on a laptop – where
it’s difficult, if not impossible, to upgrade. However, let’s first check out
the supporting cast, which in the case of the Erazer X6813 MD97762 is rather
impressive. 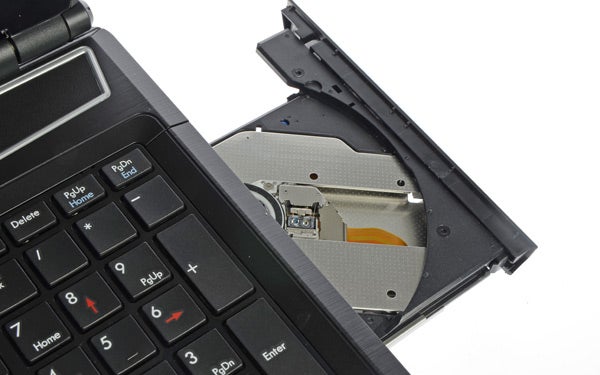 Medion’s CPU of choice is an Intel ‘Sandy Bridge’
Core i7-2630QM. This quad-core processor is pretty much the default choice in
80 percent of gaming laptops, and with a maximum Turbo Frequency of 2.9GHz
(1.7GHz default) and up to eight virtual cores, it will give plenty of
performance for even the most intense workloads. It’s certainly adequate for
any game out there. 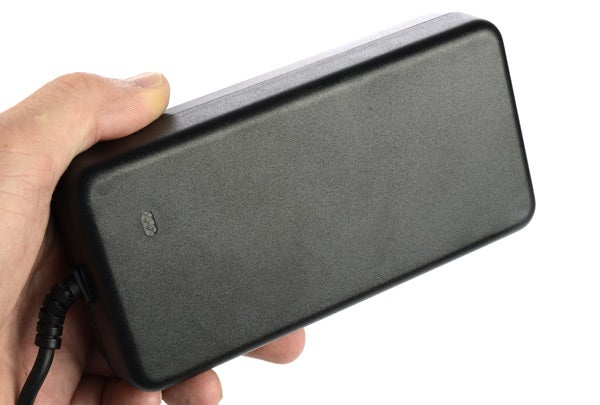 On the software front, meanwhile, the 64-bit version of
Windows 7 Home Premium is accompanied by a few interesting extras, with CyberLink’s
PowerRecover being a standout. This allows for full backups and factory
restoration, so getting a fresh, clean install will only take a few clicks.

So basically, every other component of the Erazer X6813
MD97762 is in place for stonking performance, and the graphics match up, with
an Nvidia GeForce GTX460M sporting 1.5GB of dedicated video memory. While it
doesn’t quite live up to its 500-series equivalent or the top-end GTX 580M, the
460 is nonetheless a very capable card, and the first one on the rungs that we
would class as a ‘proper’ gaming chip.

This is revealed by a smooth 35.7fps average in Crysis
(still one of the most graphically demanding titles out there) at High Detail, albeit
with the resolution at 1,280 x 720. Kicking this up to the screen’s native
1,920 x 1,080 took things down to a barely playable 21.7fps, while notching
detail up to maximum at 720p resulted in a similar 23.5fps average. Still,
that’s excellent stuff by sub-£1,000 laptop standards. In older titles there
will even be enough grunt to game at the 15.6in screen’s native Full HD
resolution. 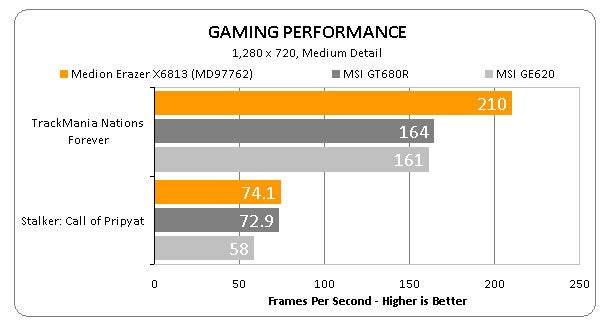 Just keep in mind that playing on battery at standard
profile settings will halve your frame rate in intensive games. And speaking of
battery, the Erazer’s 7,800mAh/68.6Wh unit kept the laptop running for four
hours and 48 minutes in our light battery test (with screen brightness at 40
percent and wireless radios turned off). Though this was while using its
integrated graphics, that’s still pretty impressive considering the CPU inside.

One downside of stuffing such powerful specs inside a smaller
chassis is that the X6813 does get quite audible when under load. However, most
of its rivals suffer from the same problem, and to date the Asus G73Jh is the only properly powerful gaming laptop we would call quiet. 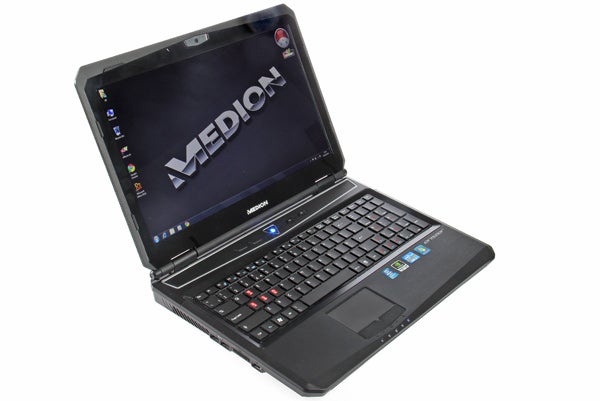 Given its excellent performance across the board, Full HD
screen and premium graphics, the Erazer X6813 MD97762’s £899 price (direct from
Medion) makes it an unbeatable bargain. MSI has been one of our favourite value
gaming laptop manufacturers till now, with its GT680R winning an award for sheer ‘clout for cash’ – indeed, the GT680R is
actually the closest spec to today’s Medion. But there’s simply no contest, as the
MSI will still set you back at least £1,200! A £300 saving is nothing to be
sniffed at, especially when the Erazer also nets you a Blu-ray drive and more
attractive chassis.

Medion’s 15.6in Erazer X6813 gaming laptops provide some of the best bargains to be had for true gaming performance in a mobile package, punching far above their price thanks to GTX460M graphics and Full HD screens across the range (even on the £750 base model) – a decision for which we can only applaud the German manufacturer. Our £899 MD97762 review configuration provides a mix of powerful components under its relatively attractive hood, with an average, non-backlit keyboard and poor speakers as our only real complaints. If you want a powerful gaming laptop without breaking the bank, the Erazer X6813s are unrivalled.