The last Medion product we looked at, the Medion Akoya S5610 Notebook, won a TR award because it offered a boatload of features for a relatively small amount of cash. Now the German PC manufacturer looks set to do it again in the desktop space with its Akoya P36888 Multimedia Home Entertainment Design Center PC.


For £500, you get highlights such as an Intel Core 2 Quad Core 2.4GHz processor, 3GB of 800MHz DDR2 RAM, a 1TB hard disk and a Blu-ray drive – not bad! But let’s also see how the rest of the PC holds up and if this is truly one of the desktop bargains of the year. 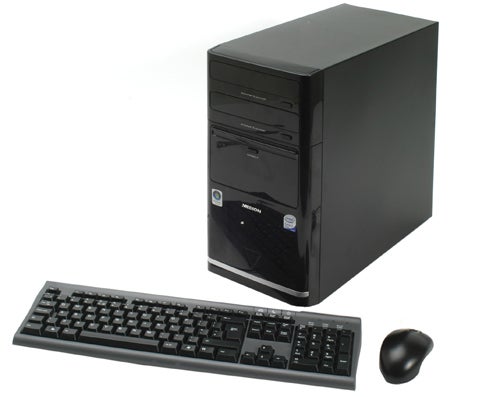 In addition to the PC itself you get peripherals and a remote. The mouse and keyboard are, surprisingly, PS2 models rather than USB which immediately makes them rather out-dated. The no-brand keyboard is also the most basic model we’ve seen for some time, though its keys are less spongy and more responsive than the monstrosity that came with the HP-Compaq dc7900. The keyboard surround is made from a dull grey plastic that doesn’t match the PC at all, though the keys themselves are matte black. And forget about extra function or multimedia buttons, all you get here are dedicated power, sleep and hibernate ones. 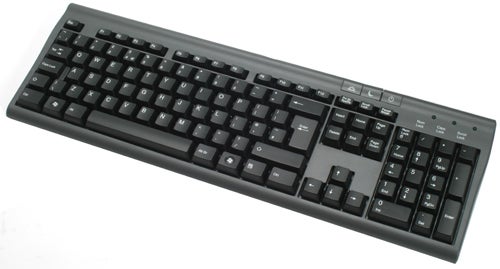 The Logitech mouse is slightly better; a matte black three-button symmetrical affair equally suited for left or right-handed use. The rubberised two-directional scroll wheel is comfortably broad, and the buttons have a good response. But in this day of optical, laser and BlueTrack rodents, it is, of all things, a ball mouse. This is something I honestly expected never to see again, and certainly not bundled with a powerful PC. 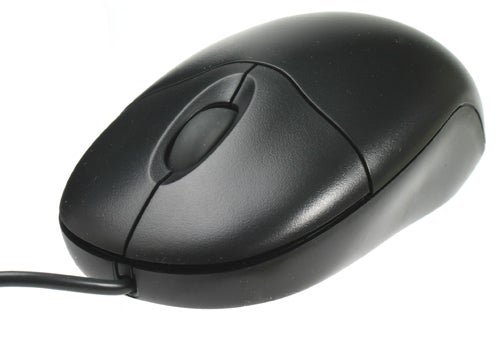 Thankfully, the remote isn’t as disappointing. It runs off two AAA batteries, so environment lovers like me can use rechargeable ones. It’s a mix of glossy black and silver plastic, feels reasonably comfortable in the hand, and has small but soft buttons. The logical button layout makes it easy enough to work in the dark once you get used to it, all of which is especially nice when controlling the P36888’s integrated TV tuner.


Other bits and bobs include a guide to setting up your PC plus a manual in various languages, along with a Windows Vista Home Premium 32-bit disc and a Driver & Applications disc.

At 410 x 370 x 180mm (WxDxH), the P36888 is one of the smallest tower cases I’ve seen recently, even more unexpected considering the impressive specifications. Also surprising is the ventilation, since aside from the PSU there is only one fan grille in the entire chassis. It’s very solid too, with a matte black steel main chassis and piano black glossy plastic front.


This little machine’s front is kept very clean, thanks to the LG Blu-ray drive (which, for those of you that care, can also handle HD-DVD) being hidden behind a custom door that sits flush with its surround. The only disadvantage here is that the open/eject button requires a lot of pressure before it will operate. 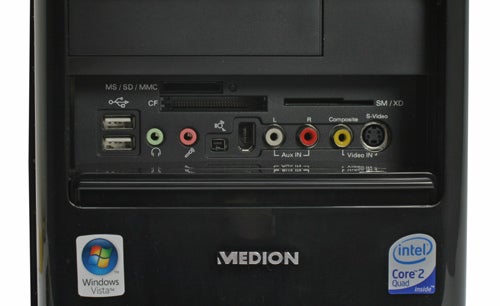 There is also a plethora of connections hidden away behind a panel at the P36888’s front. This panel slides down at the press of a button, which is an impressive effect, and reveals a free 3.5in bay in addition to a media hub. Here you’ll find a memory card reader supporting everything from CF to xD, two USB ports, mini and standard FireWire ports, 3.5mm audio jacks and more unusually, video ports including composite and S-Video. The only thing that’s missing both here and at the machine’s back is e-SATA, which considering its claims of being a full multimedia centre is regrettable. The last point of note about the front is the triangular power button, which emits a soft blue glow when the PC is turned on. 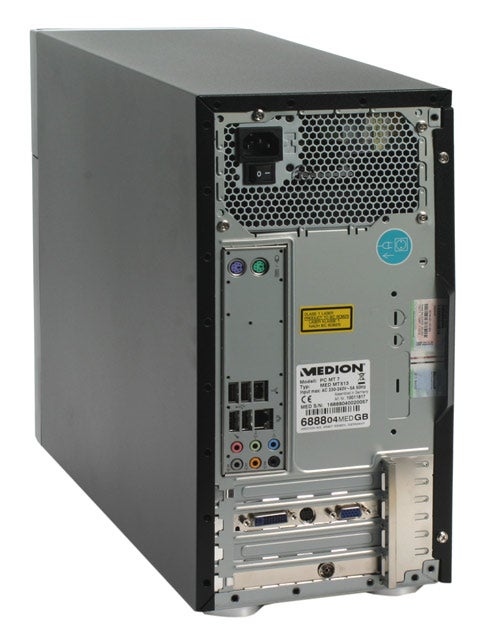 Moving around to the back, it’s pretty sparse. A further four USB ports join another FireWire port and Gigabit Ethernet, below which you’ll find analogue connectivity for 7.1-channel surround sound. Unfortunately, there is no sign of any digital sound outputs, a baffling omission on a Blu-ray equipped system and an unfortunate choice for cost-cutting. Below this we have DVI and VGA ports, and the proprietary breakout connector common to most NVidia cards. Last of all is a single antenna port from the aforementioned DVB-T tuner card.


Opening the case up is really easy, though you’ll need a screwdriver to remove the two screws securing the side panel. Inside, layout is quite tidy, and though cable management is rudimentary at best, this is not the kind of high-end rig where you’d expect much attention to be lavished on these kinds of details. 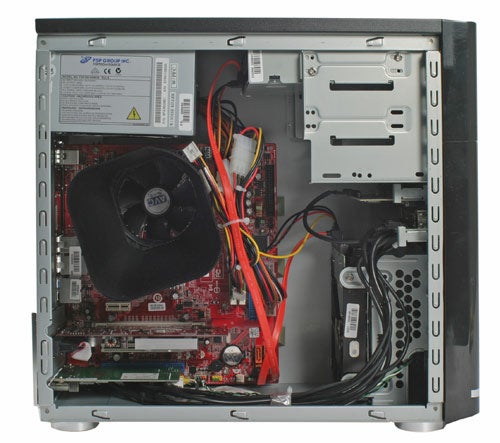 Nor is the Medion Akoya P36888 particularly upgrade-friendly: there is only one free PCI slot and one mini PCIe. Both RAM slots are filled, though 3GB should be plenty to be getting on with. The hard drive is mounted vertically and there are no free HDD bays, though again it’ll take a while to fill up the 1,000GBs’ worth. Besides, you can always stick another one in the free 3.5in floppy or 5.4in bays.


The one thing that immediately grabs our attention is the huge plastic shroud which cleverly directs warm air from the CPU cooler straight out of the case. And with this single CPU fan the PC remains very quiet during operation – and thankfully, also quite cool.


A Fortron 350W PSU is plenty to keep this system happy, but does present a potential problem if you want to upgrade the video-card to something more capable than the GeForce 9300GS. You’ll also want to make sure that if you upgrade, it’s to a two-slot card that vents all its heat outside the case, as otherwise things will start getting toasty real quick.

So is this the system for you? As already mentioned, it’s pretty darn powerful in every regard except graphics. The 2.4GHz Intel Quad Core Q6600 with 8MB cache is an especially competent performer at this price point, and 3GB of RAM is as much as the 32-bit version of Windows Vista Home Premium will ever need. In fact, this would make a pretty great gaming system, were it not for the aforementioned 9300GS. Though it handles HD video decoding with ease, keeping CPU usage under 30 per cent when playing a Blu-ray, this graphics card is rather underpowered when it comes to more demanding forms of entertainment. 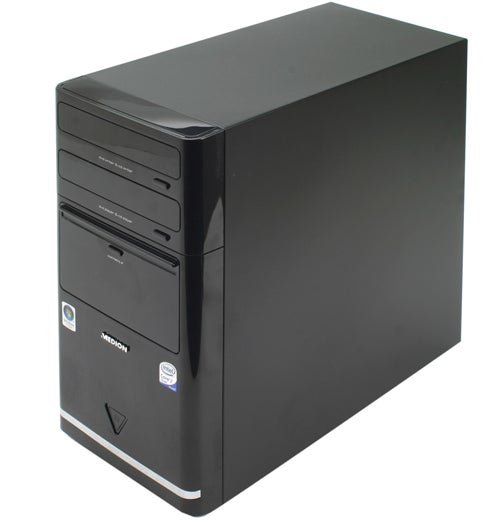 To give you an indication, we ran our TrackMania Nations Forever benchmark, something we usually reserve for notebook graphics. Resolution was set to 1,920 x 1,200, since for a Blu-ray equipped PC you’ll want nothing less for your monitor. At high detail, the GeForce 9300GS managed a paltry 8.26FPS. And if this is how it does with something like TMNF, just imagine Call of Duty 4, because that’s about all this PC will be able to do.


So serious gamers will most likely want to upgrade the video card and possibly power supply, but for other home users the Medion Akoya P36888 will power through anything you choose to throw at it. And then there’s that stunning price tag: quite frankly, getting this kind of specification for under £500 is amazing. Just buy a £5 adapter to make the DVI HDMI, a £20 sound card to give you digital audio out, and you have your fully-fledged home theatre PC right there. Everything else is already present: a small, quiet, powerful and attractive system with Blu-ray, TV-tuner and remote. 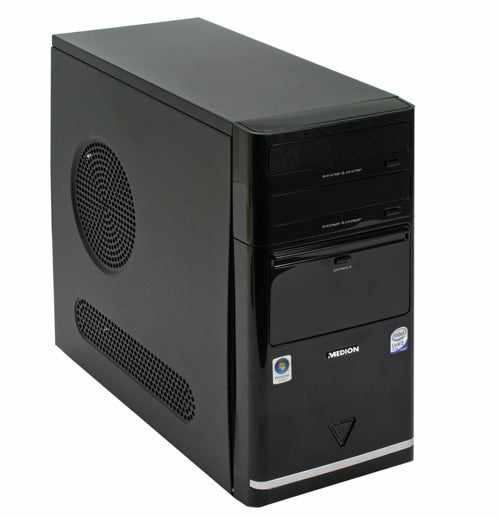 In terms of software, we get the usual Google Desktop to waste resources on, a full version of Microsoft Works 9 and a 60-day trial version of Office 2007. Nero Express takes care of multimedia including such tasks as burning photos to DVD, while PowerDVD is on hand to play back those Blu-rays.


Overall, though, and despite the limitations imposed by the small case and a few omissions like digital audio out or decent peripherals, Medion has put together a very attractive package for an excellent price.


With the Akoya P36888, Medion delivers a PC with Blu-ray drive, Quad core Intel processor and a terabyte of hard drive space wrapped up in an attractive small tower case for just under £500, making its flaws easy to forgive.