Isn’t the PSP great? All that power in a handheld format! Quality 3D graphics, CD-quality audio, analogue controls! And what about the games? Don’t you just love the way it’s bought those great old PlayStation brands back to life? We haven’t had a decent Ridge Racer since Type 4 back in 1999 and the same goes for WipEout. Now, after all those years of PlayStation 2 damp squibs – wham! New versions that bring the best of the old screaming into the handheld era, with visuals that come pretty damn near to justifying all that PS2-in-your-pocket hype. And now we have Medievil. Another classic series given another brilliant overhaul for its new life on the PSP.


If only this last bit were true. 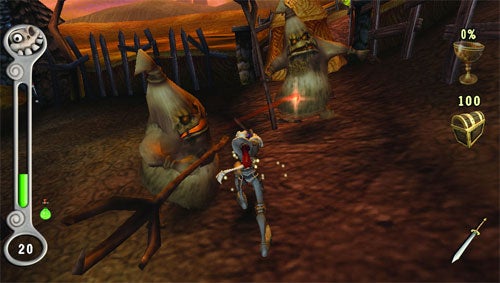 Let’s face it – Medievil never quite had the cachet of the great PlayStation franchises. In the general scheme of things, Sir Dan Fortesque’s adventures sit somewhere below Spyro the Dragon’s, let alone Crash Bandicoot or Solid Snake’s. All the same, let’s not hold this against our jawless, skeletal protagonist. While he was never one for adventurous gameplay, he always delivered solid adventures with a distinctively English sense of humour. There is worse raw material that Sony’s Cambridge studios could have worked with. 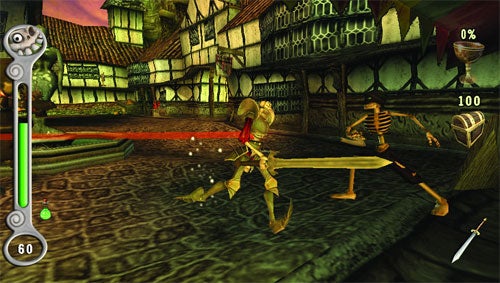 And it must be said that this resurrection isn’t a total disaster. Graphically, it’s a fairly big step up from the old PlayStation incarnation. The PSP isn’t anywhere near to matching the PS2 on polygon counts, but its texturing and lighting capabilities place it way ahead of the old PSX, and Sony Cambridge has used that added power to create some good looking environments and people them with suitably spooky monsters. If earlier Medievils saw them stretching for that Tim Burton, Nightmare Before Christmas style, then this one has it right within their grasp. The matching Danny Elfman-esque soundtrack also helps build atmosphere, as do the well-animated cut scenes. In fact, there are times when the slick presentation almost adds up to a classy game. See the score above? At least two of those points are for the art direction.

The humour has improved with age, as well. Post-Little Britain, the oblique Tom Baker voiceover couldn’t be more timely, and the game resounds with touches of personality. From the braggarts and flirts of the Hall of Heroes, where new weapons are doled out to our skull-headed champ, to the imps, phantom organists and weird demons that people the levels, the game is full of good voicework and funny scripting. Even Dan, a cheap coward with a poor reputation, seems to have a little charm this time around. 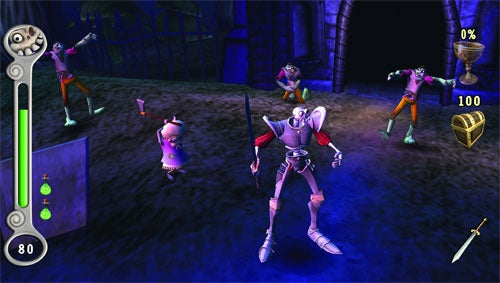 But that’s pretty much it for the good stuff. The problem with Medievil Resurrection is that it kicks off with a mildly interesting opening act, then just settles down to provide a lot more of the same. There’s just no getting around the fact that the basic gameplay is pretty dull. For the most part, it involves trundling through each level, whacking enemies with a choice of melee and missile weapons, while trying to uncover runes. Runes unlock gates, and therefore new parts of the level or, eventually, the exit. After a few levels, a boss battle might appear, and there are occasional puzzles to spice things up, but generally that’s your lot.


In itself, this isn’t necessarily a bad thing, but the problem is that the actual beating things up bit isn’t all that much fun. Your monstrous opponents are either stupid and essentially harmless, or stupid but with an annoying method of hitting you and draining half your energy when you least expect it. The most annoying ones require several hits to dismiss – and by that I mean a lot of hits. At one point in the game I spent five solid minutes poking some git with a spear every time he wandered around a corner, at which point he would fly backwards, right himself, then amble round for another go. It was so dull that I found myself looking up and watching…the horror….Diagnosis Murder instead! Believe me, when a woefully poor doctor goes detective show starring Dick Van Dyke looks exciting, I know that I’m not playing the right game. 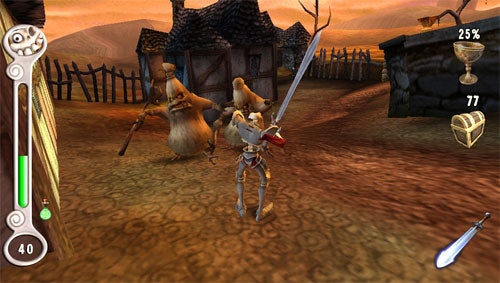 The puzzles, meanwhile, are a mixed bag; either reliant on the classic trudge-around-the-level-to-find-an-item-then-bring-it-to-a-certain-spot school of vintage puzzling, or even less trendy “set fire to club and burn flammable parts of scenery” set. Neither branch is particularly interesting, some puzzles prove tediously time-consuming, and Dan’s tendency to set fire to himself while setting the club alight is really just adding insult to injury.

In a vague attempt to show that somebody on the development team realised that things have moved on since the last century, the game also features the odd challenge – the sort of little mini-game found in a Zelda or a Jak and Daxter. Sadly, whacking rats and herding sheep is as imaginative as it gets, and here the execution is woefully poor. Sorry, but these aren’t much fun either. 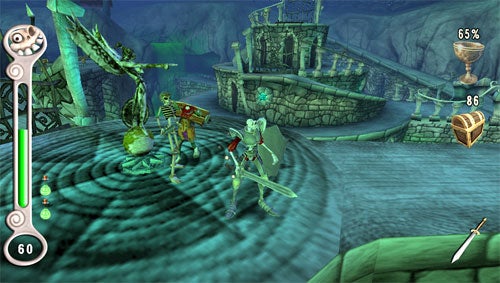 Some of this could have been excused if the levels were full of standout moments or lush vistas, but no. There are exceptions, but for the most part they’re horrifically bland and samey. And while the early levels have the decency to stay fairly compact, later ones seem to go on forever. One, Scarecrow Fields, proved such a lengthy struggle to progress through that I not only lost the will to carry on playing but – almost – the will to live. It doesn’t help that Sony Cambridge has been stingy with the health potions, or that some monsters can knock so much off you in so little time. At one point I was saving after each and every kill, not out of fear of dying, but just out of fear that I would have to spend another five minutes defeating the same dumb monster again.


And don’t even get me started on the camera. It just about copes with normal gameplay, but in boss battles or mass scraps it’s determined to prevent your survival. When the boss battles are so completely based on attack patterns, it helps to know exactly where the next attack is coming from, don’t you think? 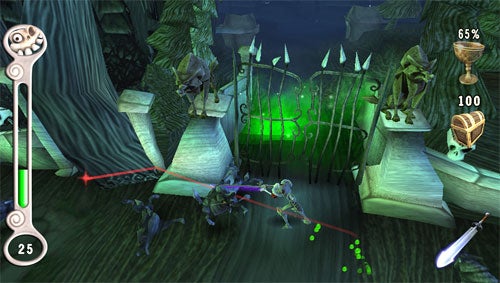 At its best, this is an average title with decent graphics but bog-standard gameplay. At its worst, it’s a bit of a leaden slog. Like a two-hour special of You’ve Been Framed, it’ll make you smile, even laugh occasionally, but is that really worth all the wasted time? Even when we last saw Medievil, games like Soul Reaver and Ocarina of Time showed that there were exciting, epic new directions that the third-person action/adventure could take. In the time since, Jak and Daxter, Devil May Cry and God of War have confirmed it. Sadly, Medievil now seems like a giant step backwards. If this is all that this series has to offer, then perhaps it should stay buried for good.

Not the most successful resurrection. The heart is pumping and there’s colour in the cheeks, but the higher functions are showing little sign of life.