One of the problems with Playstation Move has been the lack of killer action and adventure titles that exploit its motion controls. Fans of sports, shooting, dancing and mini-games are quite well catered for, but there’s nothing to match the likes of Super Mario Galaxy, Legend of Zelda: Skyward Sword or Metroid Prime Trilogy on Wii, even though Sony’s sensitive motion controller would be more than up to the job.

Medieval Moves certainly has a little potential. It’s a fantasy action game from the makers of the best Move launch title, Sports Champions, with effective Move-controlled swordplay and archery. In fact, the mechanics of swordplay, archery and even disc-golf are taken wholesale from events in Sports Champions. Sadly, it has little or no relation to Sony’s much-loved Medievil series (hence the more conventional spelling) with all that ties the two together being that both feature skeletal heroes, fantasy settings and swords. 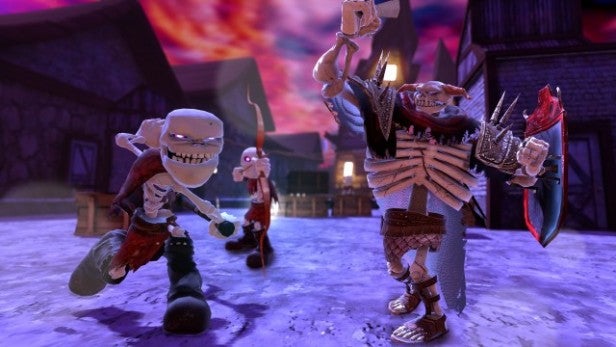 It’s the tale of Prince Edmund, whose kingdom and castle become over-run by an evil undead sorcerer, with the knights, the people and Edmund’s old comrades transformed into fiendish skeletons. Protected by a magic amulet, it’s up to Edmund (or Deadmund as he’s now known) to make way through several stages, hacking and slashing away at boney foes with his sword, blocking incoming hits with his shield, and taking out more distant enemies with bow and arrow.

For the most part the controls work rather well, with Move tracking hacks, slashes and blocks with its usual accuracy, and with the archery working just as well here as it did in Sports Champions. Note that it all works much better with two rather than one Move controllers, as missing the second controllers involves additional and not-so-intuitive button pressing. Aiming arrows can be tricky, particularly when you’re aiming towards the corners of the screen. However, when it all comes together Medieval Moves does a nice job of making you feel like you’re engaged in heroic battle, as you slice, dice and ankle-slash you way through the skeletal hordes, stopping every now and then to wipe out irritating skeletal archers or sneaky ninja-star throwers.

It’s also quite well presented, with attractive cartoon-style graphics, effective use of spoken dialogue, and some nice motion comic-book interludes that tell the story. It’s not what you’d call a gamer’s game, but it’s good fun for kids and their heroic warrior dads, particularly if enjoyed in short chunks. 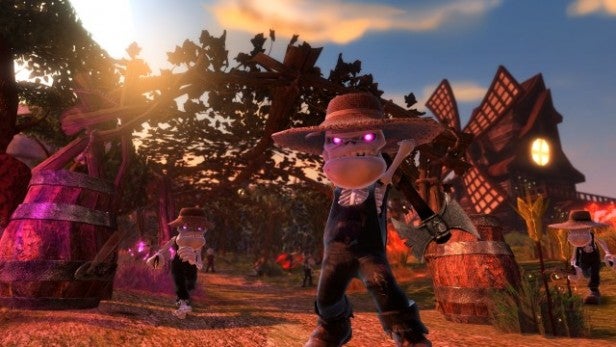 Sadly, Medieval Moves does have a problem. It’s a bit unfair to criticise it for the fact that it’s on-rails; it never pretends to be a full-on, Zelda style adventure. All the same, you can’t help wishing it had a bit more variety and depth. What starts out as an entertaining melee-based variation on a lightgun game soon starts to feel a bit tired, as you swing out at skeleton after skeleton, with the close-combat battles only punctuated by bits where you have to shoot at far away enemies or scripted action sequences where you have no control.

There’s simply not enough variation in the enemies, their tactics or their movements – or even the taunts they constantly utter. And while the game throws in additional weapons, such as shuriken and dynamite, there’s rarely that much incentive to use them. With time, hacking and slashing through one environment becomes pretty much the same as hacking and slashing through another.

This is a shame, because while recent Kinect titles such as Puss in Boots or the Pirates of the Caribbean episodes in Disneyland Adventures had far, far less impressive motion-controlled swordplay, they knew better how to balance it with other activities. Medieval Moves starts on solid foundations, but doesn’t really do enough to build on them.

Let’s not be too harsh. This is still a fun game with a lot that younger gamers will enjoy, and it’s priced at a very reasonable level. If we’re disappointed it’s just because it could have been so much more exciting for kids of all ages with just a little more variety and imagination.

Medieval Moves is nearly a must-have Move game, thanks to a solid grasp of motion controlled swordplay and archery and nice presentation. Unfortunately it runs out of steam and ideas far too soon, becoming overly reliant on roughly the same gameplay in roughly the same patterns. It’s still a fun game for younger gamers, but one best enjoyed in bite-sized chunks.