Mario Kart 7 is a massive reinvention of the series, combining open-world racing across the Mushroom Kingdom with a realistic simulation of Kart racing, built using a new tyre physics engine designed in conjunction with Michelin. A comprehensive suite of upgrade options enables you to tailor every aspect of your Kart and racer, from the exhaust through to the suspension, while new online racing modes see players competing in weekly tournaments with rivals from across the globe. 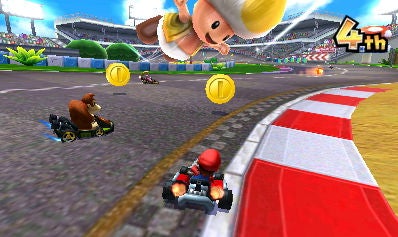 Only joking. Mario 7 is Mario Kart as you know and love it; a game where Mario and his mates from the Mushroom Kingdom ­(plus accompanying worlds and galaxies) drive speedy Karts through heavily themed tracks, firing off turtle shells and lightning bolts at each other in a bid to steal a podium position. In fact, the series’ 3DS debut is arguably the most conservative Mario Kart in years. It doesn’t have the wide, Wii Wheel-friendly tracks, boosting tricks and motorbikes of Mario Kart Wii, or the odd dual-characters mechanic of Mario Kart: Double Dash on Wii. “Don’t fuss with the formula” (or something similar) appears to be the guiding maxim, and when the formula works so well, it’s oddly hard to disagree. 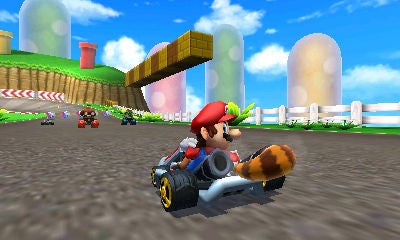 Where there are big changes, they’re carefully controlled. Each Kart now has a glider which opens only on specific jumps, allowing Mario, Yoshi and their chums to glide gracefully down to earth, gathering a few coins and maybe stealing a position on the way. Collectible coins have been reintroduced, and as your tally rises through the various cups and competitions, new vehicle upgrades are automatically unlocked, allowing you to choose from a growing number of combinations of chassis, tyre and glider and so compensate for the weaknesses of your current character or tailor your ride for a certain cup. It’s hardly Gran Turismo, but it’s an interesting addition. Finally, there’s the option of a first-person-view with tilt-controlled steering. It makes the game feel even faster, and it’s surprisingly easy to get  used to. 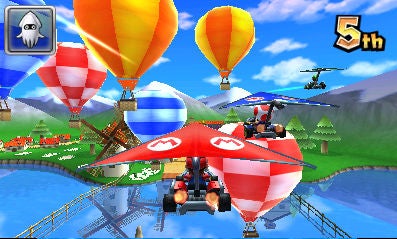 The stars remain tied into four basic classes, ranging from the light, weak, fast accelerators (the ever infuriating Toad and Princess Peach) to tbe big, strong bruisers who accelerate with all the pace of a 1970s Peugeot Estate packed for a camping holiday (Bowser and Donkey Kong). Disappointingly, the initial line-up is restricted to just eight characters, with no Wario or Bowser Jnr to be seen, but while not all our personal favourites return, other stars can be unlocked by beating cups on the more difficult 150cc level (which might take some time). 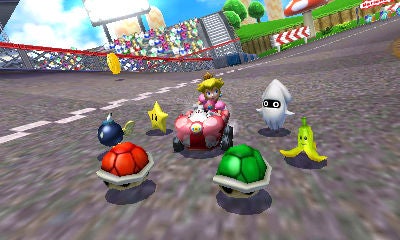 There are eight cups in total, four featuring sixteen new circuits, or at least new variants on old themes, and four featuring another sixteen old classics extending all the way back from Mario Kart WII to the original Super Mario Kart on the 16-bit SNES.  All have been tweaked to some extent, mostly to make use of the gliders, but it’s a pleasure to see the N64’s Luigi Raceway or the Gamecube’s Dino Dino Jungle one more time, with the much-improved visuals helping stall some of the sense of deja-vu.

And here’s the odd thing about Mario Kart 7. It’s not a major reinvention or even a huge step forwards from what has gone before. While playing it, it’s hard not to be aware that you’re putting more hours (and more money) into effectively having the same experience you had five or ten years ago, or maybe longer. This is possibly the prettiest version, with lovingly animated characters, some neat effects and a little more background detail than even Mario Kart Wii. It looks great in 3D, and is arguably the most immersive 3D game on the 3DS. All the same, it doesn’t feel like a substantially different game. 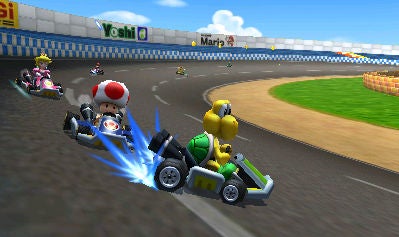 Yet this is not what you’ll be thinking while you play it. As ever, Mario Kart is by turns fun, exhilarating, magical and utterly infuriating. It’s a game where you can fall from first to seventh position in the second lap, but still have a hope of clawing your way back to the front before the chequered flag waves. We’re not proud to say that one disastrous race ended in a flurry of bad language directed at a smiling mushroom boy, or that a later hard-won victory ended in leaping off the sofa to shout “In your face, Toad”, but both things happened. Mario Kart has this way of sucking you in. And there’s a bit more scope for skill than in the Wii version too, with tighter turns in some races and less obvious rubber banding of opponents to stop them getting too far ahead or too far behind. 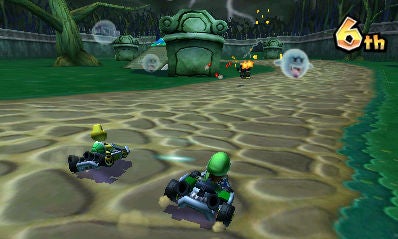 The new tracks are a match for the old ones too, each one containing some areas where it’s safe to go fast, a few spots where you can try sneaky alternate routes or cheeky tricks, a few areas where a craftily placed weapon can wreak havoc, and a few trouble spots you’ll learn to dread. There’s a little more underwater action this time around, and some superb tracks themed after musical instruments or the Wuhu Island setting of Pilotwings 3D, Wii Fit and Sports Resort. There are a couple of courses that take place on one long stretch, rather than a circular track, and Mario Kart 7 even packs in the ultimate version of the climactic Rainbow Road; a true show-stopper. 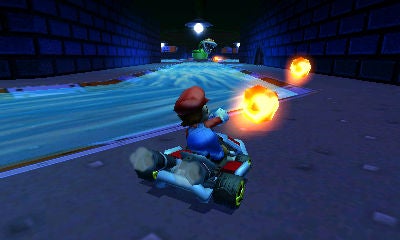 With Mario Kart Wii Nintendo did a fantastic job of opening Mario Kart to online play, and Mario Kart 7 goes even further. If you haven’t got friends to play with the game will find you an ad-hoc group, and the racing is smooth and highly enjoyable. The old battle and coin-collecting modes have also made a comeback, and some cool Streetpass and Spotpass functionality should see you racing ghosts of passing strangers as time goes on. The real long-term appeal of Mario Kart has always been in local competition, preferably against mates in the same living room, but when that’s not possible Mario Kart 7 certainly gives you the next best thing.

Verdict
Mario Kart 7 is still Mario Kart, and in many ways it’s a ‘Best of’ Mario Kart that does very little to push the series forwards. Still, who cares? It’s comfortably the best of the Kart racing breed and one of the best handheld games you can play, with great tracks, great gameplay and excellent online features. With this and Super Mario 3D Land, the 3DS is finally coming into its own.