A couple of weeks back we tested – and were enthralled by – Marantz’s VP-15S1, a high-spec, high-price but above all high-performance DLP projector. And within that review we referred to Marantz’s even more high-end projector offering, the legendary VP-11S1, little realising at the time that we would soon have a perfect excuse for testing this premium beast.


Yet here it is on our test benches, complete with a new letter ‘H’ at the end of its name to signify that its HDMI sockets have been upgraded to the latest v1.3 specification for Deep Colour compatibility. This specification boost is remarkably accompanied, too, by a huge price cut, from the original 11S1’s £10,000 – yes, ten grand – to ‘just’ £7,000 for the 11S1H version. Cool.


That said, £7k is still a lot of dosh for a projector in today’s competitive world. Don’t forget, after all, that we tested only last week a Full HD DLP projector, the InFocus X10, costing just £900 or so. So even at its new lower price the 11S1H is going to have to work mighty hard to justify its outlay. 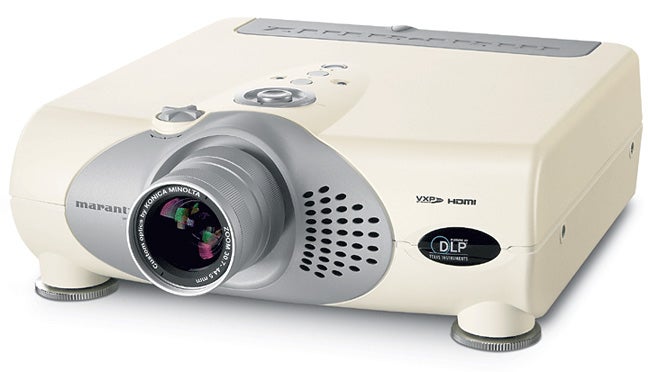 It sets about achieving this Herculean task right away, though, courtesy of one of the most indomitable build qualities we’ve seen. The distinctive cream and grey bodywork, for instance, is made from incredibly robust aluminium designed to soak up electrical vibrations and reduce the amount of operating noise. Also, the lens is a very impressive looking affair from Konica/Minolta that sticks out an inordinate distance from the rest of the bodywork, as if to make the point that it really means business.


The newly upgraded twin HDMIs lead the connections charge, meanwhile, but they receive good assistance from a pair of component video jacks, a D-Sub PC port, two DC trigger outputs, remote control in/out, and an RS-232C port to help the 11S1H get integrated into a professional home cinema installation – something we suspect could happen quite a lot given the Marantz’s premium aspirations.


Inevitably for its money, the 11S1H is a Full HD projector, with its other key specification being a claimed contrast ratio of more than 6,500:1. And before you think this doesn’t sound all that impressive versus the figures quoted by some rivals, you need to know that its 6,500:1 is a native figure, not one that’s dependent on any auto-iris systems dimming the image brightness during dark scenes in order to boost black levels.

The star of the 11S1H’s specifications has got to be its GF9351 video processing system by acclaimed image gurus, Gennum. This includes no less than four key processing elements: TruMotionHD and FineEdge technologies to improve the smoothness and sharpness of progressive images; Reality Expansion to enhance colour tones, delivering more than 1 billion gradation levels; and finally a Fidelity Engine to enhance detailing and clarity.


Another potentially key thing about the 11S1H is the fact that its DLP chipset and lens are both hand-picked for each projector, rather than being just taken at random from stock piles as happens with the cheaper 15S1.


However, anyone who read the review of the 15S1 might be thinking that aside from this latter point, the 11S1H doesn’t so far sound very different to its cheaper sibling, perhaps making you wonder why it feels able to charge £1,000 more. In fact, the 15S1 arguably has an on-paper advantage in the form of a dual-iris array for greater brightness and contrast control.

But actually the 11S1H does have one potentially massive ace up its sleeve: a six-speed, 7-segment colour wheel, complete with a so-called ‘neutral density (ND) filter’ element that sort of works like a second iris. The 15S1’s colour wheel, by comparison, is ‘only’ a five-speed, 6-segment affair, meaning that the 11S1H should suffer less with that bane of DLP’s life, the rainbow effect, where stripes of red, blue and green flit around in your peripheral vision and over very bright parts of the image.


And so it proves. For during my image testing phase with the 11S1H, I scarcely noticed the rainbow effect at all. Even during ”Casino Royale’s” opening black and white sequence, which always tends to emphasise any striping noise, the only time I saw even a hint of the problem was when I unfairly sat too near my screen, so that I had to rove my eyes over the picture more than would be the case under any ‘sensible’ viewing conditions. For me the absence of the rainbow effect really is a crucial advantage of the 11S1H that could well be enough in itself to persuade its money’s-no-object target buyer to part with the £1,000 it costs over the 15S1.


The next ”Casino Royale” sequence, the opening credits, is also extremely revealing of just how mightily impressive the 11S1H’s pictures are. For starters, even when outputting the sequence in 1080p/24 from a PS3 there’s not the slightest hint of any judder, in either the vertical or horizontal domains.


Colours also look sumptuous. Not, perhaps, quite as vivid as we’ve seen with some other high-spec projectors, but totally natural and stuffed with the sort of subtle shades that only the finest image processors can deliver. This is especially apparent with skin tones as we enter the film proper, with close-ups on faces looking as natural and noiseless as I’ve ever seen them on a single-chip DLP projector. In fact, the startling accuracy and subtlety of the 11S1H’s colours makes me wonder if the greater vibrancy of some rivals is actually hiding a lack of finesse.

Accompanying the 11S1H’s great colours is an equally great black level response. The ND filter seems to compensate superbly for the lack of the 15S1’s second iris, making the 11S1H’s black levels look deep and natural.


Even better, dark scenes look unusually transparent, which is to say the projector’s effortless, dynamic iris-free combination of extensive contrast and impressive brightness allow it to reveal levels of shadow detail, greyscale finesse and image depth/scale that elude the vast majority of cheaper models.


The picture is also transparent in terms of the detail it contains. As you’d hope from a projector with a Full HD resolution and Gennum processing, not one single pixel of detail seems to get lost in the journey from a Blu-ray disc or Sky HD broadcast to the screen. In fact, the extreme clarity of the picture is such that it even makes you feel as if the projector might be actually adding some detail.


Furthermore, it would appear that the hand-picking of the 11S1H’s lens and DLP device also delivers a small benefit, as the picture seemed somehow fractionally more uniform in its sharpness than that of the 15S1.

Another key plus we’ve come to expect of Gennum processors is their ability to rescale standard definition pictures better than most. And so it proves here, as all but the very grubbiest standard definition images are raised up to the 11S1H’s Full HD, huge-screen game with a truly remarkable sharpness and freedom from noise.


As you’ve probably gathered by now, it’s hard to find fault with this projector. But there are a trio of puny things worth mentioning. First, it runs rather noisily, despite its heavyweight bodywork. I’d even go so far as to say it sounds like a vacuum cleaner when you turn it off – but luckily you’ve already stopped watching it by then!


I also detected some minute chroma flaws in the extreme corners of the picture. To be fair, though, they’re actually less overt than you’d get with a typical home projector, and the only reason I noticed them at all was probably because of the extreme accuracy and purity of the rest of the image.


My last thought is that there’s a tiny bit of improvement room when it comes to black level depth. But I certainly wouldn’t want this to come at the expense of the gorgeous shadow detailing that helps set the 11S1H apart from cheaper rivals.


On paper I wasn’t sure the 11S1H had quite enough in its locker to justify costing a grand more than Marantz’s already stunning 15S1. But in the end I suspect that to the 11S1H’s target market, spending a grand to pretty much remove DLP’s rainbow effect from the equation probably seems like money very well spent.