The SR7010 is Marantz’s current top-end AV receiver and the replacement for the SR7009. Futureproofing is a key part of the SR7010’s appeal, with a wealth of cutting-edge tech keeping it up-to-date as the rest of your AV system evolves. So if you want to upgrade to Ultra HD Blu-ray or “3D” audio formats such as Dolby Atmos or DTS:X, then the SR7010 has your back.
It’s a high-spec centrepiece for your home cinema system, offering 9 x 200W of amplification and support for a wide range of audio formats. So without further ado, let’s find out if it’s as good as it sounds.

The SR7010 is that rarest of things, a good-looking AV receiver. It fits the classic Marantz template, with two curved panels flanking a brushed aluminium section on the front, while an illuminated porthole display adds an attractive visual focal point.

This display window is small, but it’s a useful “at-a-glance” indicator, showing the selected input and volume level. For a more comprehensive status update, there’s a larger LED panel under the flap at the bottom, alongside a range of buttons and inputs.

It’s available in black or silver-gold, both of which bring a sense of elegance that no other brand can match. And as you’d expect from a high-end receiver, it’s built like a brick outhouse and weighs a ton (well, 13.8kg).

Equal care and attention has been lavished on the inside, with carefully selected high-grade audio components, Marantz’s Hyper Dynamic Amplifier Modules (HDAMs) and upgraded DACs that now support 192kHz/32-bit signals.

Under the front flap you’ll find an HDMI input – one of eight in total – plus composite and analogue stereo inputs, a USB port, a headphone jack and a socket for the setup microphone.

Seven more HDMI inputs and three outputs are found on the back, all of which are HDMI 2.0a with HDCP 2.2, 4K 60p HDR, 3D, BT-2020 and 4:4:4 Pure Color support. One of the outputs supports ARC and another lets you send a different video source to a second zone.

The SR7010 can even convert video from composite to HDMI and upscale it to 4K/60p, giving your ropey old video sources a new lease of life. You can also upscale DVD and Blu-ray to 4K.

The SR7010 packs an obscene number of features into its curvy frame. You name it, this thing does it.

The SR7010 is also fully equipped for the latest “3D” audio formats: Dolby Atmos, DTS:X and Auro 3D. The latter is a paid upgrade and costs €149, while the free DTS:X firmware update was released earlier this year.

Thanks to the SR7010’s nine-channel amplification, you can create a 5.1.4 system or expand to 7.1.4 by adding an external two-channel amplifier and using its 11-channel processing power.

If this all sounds a little complicated, don’t worry. The SR7010 comes with a built-in setup assistant to get you up and running, plus its on-screen menus are easy to digest.

The assistant provides handy instructions for each step of installation, even down to connecting the speaker cables and joining a network.

You can also take advantage of the Audyssey MultEQ XT32 auto-room correction. Connect the supplied microphone, run the program and the SR7010 optimises the response of each speaker for up to eight positions in the room.

Once complete, a range of other Audyssey modes automatically monitor and enhance the sound, including Dynamic Volume, Low Frequency Containment (which prevents deep bass from disturbing people in other rooms), Sub EQ HT (which optimises dual-subwoofer setups) and Dynamic Surround Expansion, which widens the soundstage.

If you want to take video calibration to the next level, the SR7010 offers a range of ISF picture adjustments that can be used by a trained engineer. 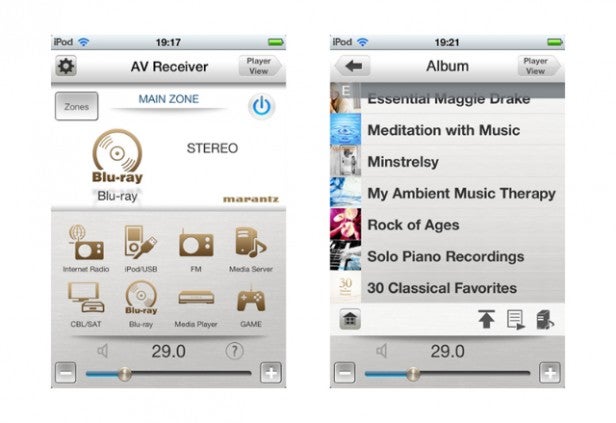 Like most AVRs these days you can also control the SR7010 using a smartphone app, which is attractively designed and easy to explore – but to be honest, I much preferred using the physical remote.

The SR7010 lives up to its high-end billing with a remarkable movie performance. Paired with a decent set of speakers – in this case XTZ’s awesome Cinema 5.1.4 system – the Marantz musters an enormous, engulfing soundstage, energised by quick, vigorous effects and thunderous bass.

What stands out is the immersive nature of the SR7010’s soundstage. Slick interplay between channels and seamless integration place you at the heart of the action. It’s all held together by weighty omnidirectional bass.

Even the most complex movie soundtracks are reproduced with terrific clarity and organisation. Big action scenes have plenty of air and space, with the SR7010 decisively steering effects to precise locations in the room.

And as the power ratings suggest, it’s astonishingly muscular. Explosions have depth and heft, giving blockbuster movies a convincing sense of scale.

Edge of Tomorrow on Blu-ray offers a perfect demonstration of the SR7010’s talents. As Cage tumbles from the Quadcopter towards the beach, drop lines twang and missiles whoosh around your head. When he hits the ground, you’re surrounded by weighty explosions, rattling gunfire and mecha-suited soldiers stomping past. It’s a thrilling experience.

This scene can sound brash and messy through an inferior receiver, but the Marantz’s poised, articulate presentation makes it an absolute joy.

When Cage finally turns off the safety, he lets fly with a barrage of machine gunfire. It sounds incisive and snappy, with an underbelly of tight, detailed bass. There’s a decent level of attack but tonally it’s neutral and well-balanced, never straying into brightness or aggression. That’s not the Marantz way.

You’ll get more bite and ferocity from a Yamaha or Onkyo for example, but Marantz’s approach is refined and easy on the ear.

It’s also remarkably detailed. Small high-frequency nuances make effects realistic and three-dimensional. The rustle of sand as the alien Mimic appears in the bunker and the small mechanical clicks of the mecha-suits are all rendered with impressive lucidity.

Switch to Mad Max Fury Road’s Dolby Atmos soundtrack and excitement levels go off the chart. The SR7010 and XTZ speakers ping car engines, harpoons and swirling sandstorms over your head with energy and precision. The placement of whispered dialogue during the credits creates a disquieting atmosphere, while Max’s voice is solid and full-bodied.

Meanwhile, the subwoofer pounds mercilessly as cars collide and explode, and every scene is packed with top-end detail. The SR7010 is a great advert for the Atmos format.

Marantz’s musical heritage shines through when you spin some tunes. It renders “Blue In Green” by Miles Davis on CD with great sophistication and subtlety, while more up-tempo electronic sounds such as “Together” by Kaytranada boast a tight, funky bassline and incisive percussion.

If you have this sort of budget to splash on an AV receiver, then the SR7010 is a sound investment. Its stylish looks, generous features and powerful, polished sound quality make it one of the best high-end amps around.

The comprehensive spec includes support for 4K Blu-ray, HDR and 3D audio formats – cutting-edge tech that will keep obsolescence at bay for years to come – plus a wealth of wireless music-streaming options.

In terms of sound quality, you may find a little more aggression elsewhere – but there’s an alarming amount of power under the bonnet, coupled with insightful detail, a huge soundstage and exhilarating Dolby Atmos reproduction.