The SR6005 is one of five new receivers from Marantz, sandwiched between the top-end SR7005 and the step-down SR5005. Its positioning towards the upper end of the range means it’s not cheap, but also means it’s bursting with features, packs plenty of power and boasts more connections than Heathrow Airport. Sounds good, but with esteemed rivals like Onkyo and Denon raising the bar in the sound quality department it’ll take more than a good spec sheet to steal our heart, so let’s find out how Marantz’ latest measures up in our exclusive review.

First things first, the SR6005 is gobsmackingly good-looking, by receiver standards at least. Our sample is dressed in a seriously stylish black finish with a gentle brushed effect, visible when the fascia catches the light, but it’s also available in ‘Silver-Gold’. The front panel curves round on both sides, and it’s amazing how much panache this simple touch adds to the unit’s overall design.


But all the action is in the middle, where you’ll find a large, clearly visible display panel showing the audio format, current input, connected speakers and volume. It’s flanked on either side by huge dials, the left one controlling source selection and the right controlling volume. Below the display panel is a flap hiding a bank of useful buttons and a smattering of sockets, including analogue stereo, optical digital audio and composite video inputs, a USB port for music playback from an iPod or USB memory device, a setup mic input and a headphones socket.

You can tell this is a top-end receiver just by looking at the rear panel, which is teeming with sockets that cover every conceivable need. Starting with the video sockets, we find no less than six HDMI inputs, all of which are v1.4 and therefore equipped to handle 3D video signals, while the output’s support for the Audio Return Channel feature makes it easy to pipe TV sound to the SR6005. These are ably supported by three sets of component video inputs and one output, plus four composite video inputs and two outputs.


The audio side is equally well catered for, including six sets of analogue stereo inputs (and two outputs, one of which is designated for Zone 2 use), a set of 7.2-channel pre-outs, 7.1-channel analogue input, four digital audio inputs (two optical, two coaxial) and an optical digital output. You’ll also find an M-XPort socket that lets you hook up the optional RX101 wireless receiver and stream music from Bluetooth devices, as well as acting as an IR extender. The remote control in/out, flasher in and RS-232C will come in handy when integrating the SR6005 into a custom installation setup. Naturally, all of the speaker terminals are banana plug capable binding posts (no springclips here) and can be used to bi-amp front speakers that require it.

As for the features we haven’t mentioned yet, how long do you have? Let’s start with the basics. The on-board power amplifier supplies 110W to each of its seven channels, and of course it decodes Dolby TrueHD, DTS HD Master Audio and Dolby Digital Plus soundtracks in its sleep – as well as any other flavour of Dolby Digital and DTS you care to mention.


And if you’re after 3D sound to go with those 3D pictures, then the on-board Dolby Pro Logic IIz processing will add a vertical dimension by creating front height channels, which can be used instead of surround backs. Marantz has generously supplied speaker terminals for both the front height and surround back channels, which means you don’t have to keep moving speakers around the room.

Of course, like other incarnations of Pro Logic, it’ll also expand stereo sources to virtual 5.1 or 7.1, which is great for watching TV programmes in surround sound. The SR6005 also features Pro Logic IIx and regular Pro Logic II, which you might prefer to use if you don’t want to faff about with front height channels.


Another key feature, particularly for surround sound newcomers, is the Audyssey Auto Setup mode. In conjunction with the supplied setup microphone and test tones, this function analyses your room’s acoustics and selects the optimum settings. It takes readings in six different positions to guarantee the best results for all seating areas. After the levels have been set, Audyssey’s MultEQ, Dynamic EQ and Dynamic Volume modes kick in, and like some sort of UN peacekeeping team they police the sound output, keeping it in line with the Auto Setup results by correcting problems, as well as levelling out the volume differences between different sources and programmes.


If all this autonomy sounds a little suspect, then you can manually tweak the Audyssey settings, or turn it off altogether and optimise the sound yourself using use manual settings. The alarmingly comprehensive array of sonic tweaks in the setup menu will keep audiophiles happy as a pig in muck, but with such detailed control it can get complicated, so if you’re not au fait with this sort of thing then we suggest sticking with the Audyssey settings. 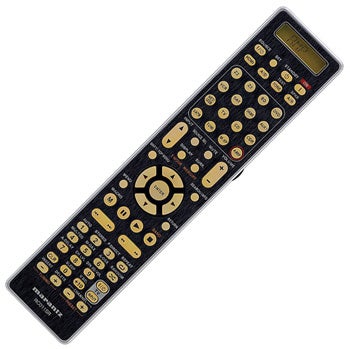 It’s worth noting here that the SR6005 doesn’t feature Audyssey’s DSX, which does a similar job to Dolby Pro Logic IIz – that’s reserved for the SR7005. Denon’s AVR-1911 is equipped with both technologies, but in all honesty you only need one of them. Also missing is the networking functionality found on the SR7005.


The SR6005 also features the M-DAX listening mode, designed to boost the quality of MP3 and WMA playback. The unit also boasts 1080p upscaling courtesy of the on-board Anchor Bay ABT2015 chip, which also provides a whole host of picture adjustments, including contrast, brightness, chroma level, hue, DNR and Enhancer.


All of these tweaks are made using an onscreen user interface, which makes life so much easier than using the front display panel. It’s fairly basic in its design, superimposing blocky white text over the picture, but it’s incredibly easy to follow, presenting options in logical sections and moving between them quickly. The remote features a fetching brushed metal finish and display window at the top showing the selected control mode. It’s also backlit, and although it’s teeming with buttons the sensible layout makes it easy to use.

We fired up the SR6005 and were treated to a wonderful performance with ”Iron Man 2” on Blu-ray. Right from the off you can hear where your money’s going – the atmospheric sound design of the opening scenes at Vanko’s house are beautifully handled, from the silky score to subtle background effects. The AC/DC track that blasts out when Iron Man dives from the plane at the start of chapter 2 is fast-paced and punchy, while Tony’s appearance in the Senate is awash with resonant, realistic echo.


This powerful, involving performance continues throughout the movie. The brilliant Monaco Grand Prix scene is a particular highlight, giving the Marantz a chance to strut its stuff. Racing cars zoom by with a forceful rasp, and every time Vanko whips the ground the impact is crisp and piercing, real heart racing stuff.

The SR6005 is accomplished in every department. Surround channels are sharp and fluidly steered – as Iron Man is chased by Hammer’s robots, they swoop from speaker to speaker with the sort of speed and immaculate timing that’ll leave your head spinning. It also digs deep into the soundtrack to expose loads of detail, while loud top-end effects don’t grate at all. The chink of metal on metal and smashing glass sounds convincing and well controlled without any harshness to speak of.


There are no major criticisms, only that the sound from the Denon AVR-1911 and Onkyo TX-SR608 is perhaps a little smoother and easier on the ear. We can’t fault its music chops either, as it articulates vocals with detail, offers tight rhythmic bass and draws out subtle musical elements easily.


With its fantastic sound quality, hordes of connections, wide-ranging feature list and classy looks, we’re in no doubt that you’ll consider the SR6005 to be money well spent. It’s worth noting that the THX Select 2-certified Onkyo TX-SR608 offers better value for money at around half the price, but that doesn’t detract from the fact that the Marantz delivers a hugely rewarding home cinema experience.