What is the Manhattan Plaza HD-T2?

The HD-T2 is a Freeview HD receiver that not only delivers standard- and high-definition TV channels but also lets you access BBC iPlayer, YouTube and VuTV, the new internet-delivered pay TV service.

It’s an improved Freeview version of the HD-S2 Freesat receiver we reviewed last year, and looks to offer the same impressive functionality, performance and value as its stable mate.

The HD-T2’s compact dimensions make it easy to accommodate, but its run-of-the-mill design will hardly set your living room alight. It’s a simple black box with glossy casing and a basic front panel that consists of three buttons (standby, up, down) and a single LED. Overall it looks and feels a bit cheap but considering it costs just shy of £50 that’s hardly surprising.

On the rear panel are HDMI, Scart, composite, analogue stereo and coaxial digital outputs, which is a generous line-up for such an affordable box and means it can be used with older, non-HD TVs. They’re joined by RF in/loop, an Ethernet port to access the online functions and a USB port for making offline software updates, not for media playback.

Online functionality is the HD-T2’s key feature. There are built-in apps for BBC iPlayer, News and Sport, YouTube and VuTV. This new box features the full HD HTML versions of BBC iPlayer, Sport and News – the HD-S2 only had the old SD MHEG version of iPlayer. However, there’s no 4oD, iTV player or Demand5.

SEE ALSO: Our pick of the Best Blu-ray Players 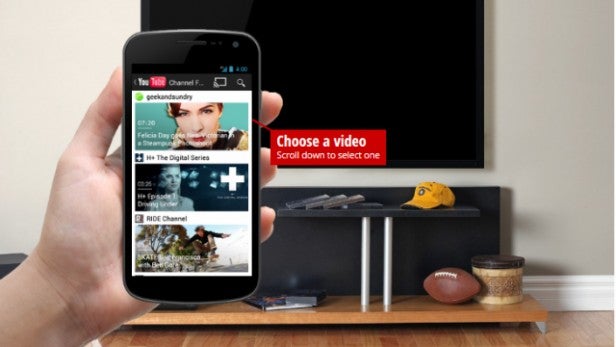 It’s one of the first Freeview receivers in the UK to implement the latest version of YouTube, which can be controlled by a smartphone or tablet. The beauty is that you don’t have to pair your phone or even open the YouTube app on the receiver – just press the TV icon in the YouTube smartphone app, select the Manhattan from the list of devices and it will start playing on your TV, assuming your phone and TV are on the same network. 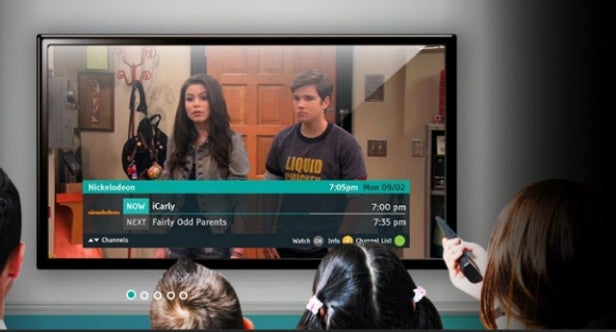 The HD-T2 is also compatible with VuTV, which currently offers the following channels: Lifetime, Comedy Central, MTV, CNN, History, H2, Crime and Investigation Network, Nickelodeon, Nicktoons, Nick Jr, Cartoon Network, Boomerang and Cartoonito. You get one-month’s free access when you buy the HD-T2, but it costs £6.99 per month after that. It’s accessed via the VuTV icon on the EPG or switching to Freeview channel 238.

Away from online functionality, the HD-T2 delivers the full gamut of Freeview TV and radio channels, including high-definition channels like BBC One and Two HD, Channel 4 HD, ITV HD, BBC Three HD and CBBC HD.

There’s also an eight-day EPG and support for interactive content and digital text. One nifty feature is the ability to create up to five favourite lists, cutting out all the channels you don’t watch. But the best part is that your lists are displayed on the first page of the EPG alongside the default channel lists.

A series of installation screens are displayed when you first fire up the box. These let you set the aspect ratio, HDMI output resolution (from 576i up to 1080p), channel tuning and parental PIN. 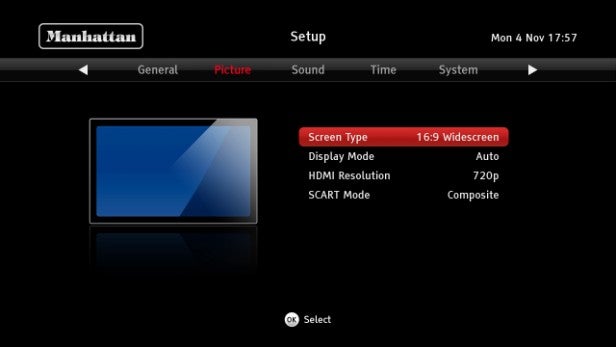 Onscreen presentation is simple but attractive, using sharp white text and colourful icons over a black background. The setup menu is clearly laid out and logically sequenced. Categories are arranged in a row along the top of the screen, with corresponding options appearing in the space below.

Among the options are HDMI resolution and lip sync delay settings, plus the ability to enable RF loopthrough in standby, which is switched off by default to comply with EuP power consumption requirements. 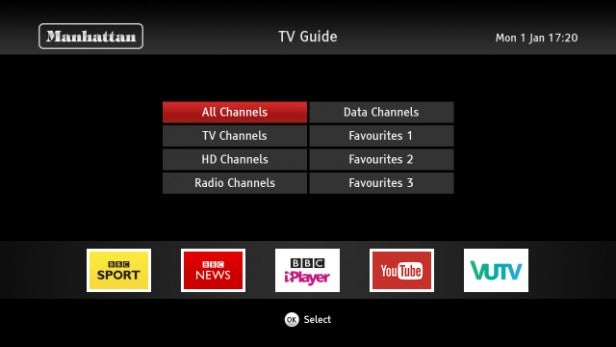 The EPG is thoughtfully designed. Hit the Guide button once and it displays a choice of channel lists – All, HD, Radio and any Favourite lists you’ve set up. 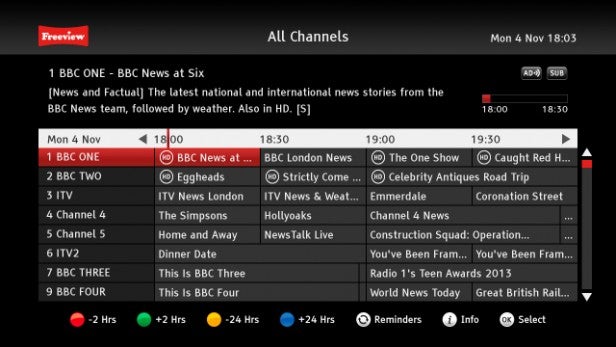 Select one and the programme grid displays eight channels at a time over a two-hour period. There’s a shortened synopsis of the selected programme at the top and colour-coded shortcuts at the bottom, but no live TV screen to keep an eye on programmes as you browse. You can skip back or forward by two or 24 hours, set reminders or view the full synopsis by hitting ‘i’. The now/next onscreen banners are similarly clear and informative. 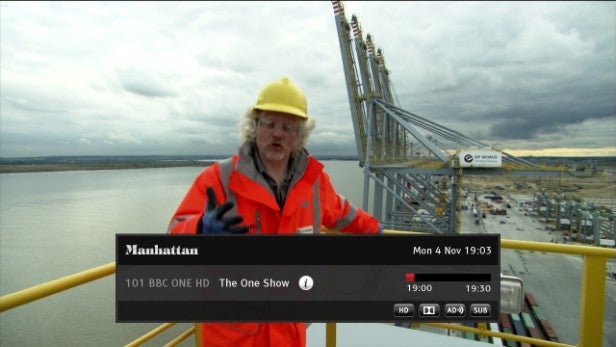 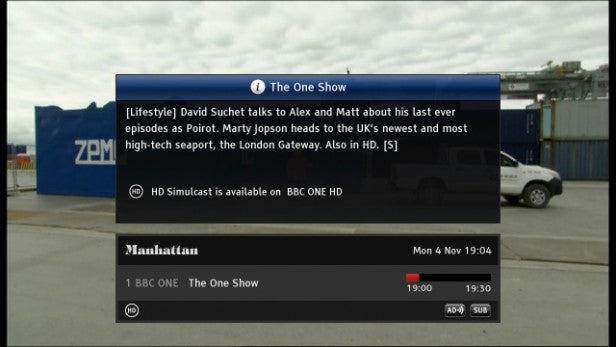 Sadly it’s not all plain sailing. The cursor is remarkably sluggish when moving around menus or the EPG, taking at least a second to respond after pressing the button. That makes for a frustrating user experience and feels laborious when creating Favourite lists.

We’re not too keen on the remote either. It’s light and plasticky, and many of the buttons are too small – particularly the important Back, Menu and Guide keys. However, the rest is fine, with a well-placed direction pad and clearly-marked programme change keys. There’s even a dedicated YouTube button to save you going through the EPG.

We encountered no problems when using the online apps. VuTV offers a decent range of channels (particularly if you have kids) and works smoothly. The menu presentation is clear and crisp, with onscreen banners displaying the relevant channel logo alongside ‘now and next’ programme info. You have to hit the yellow key for the programme synopsis and green for the VuTV EPG.

One minor irritation is that you have to remember to press the up/down keys to change VuTV channels – if you press the usual P /- keys it changes to the adjacent Freeview channel.

Similarly all the BBC apps loaded without hesitation and streamed content without any glitches. Picture quality is excellent too, boosted by the ability to watch in HD. YouTube is a joy to use and looks terrific, using large thumbnails for each video with genre-based short cuts on the left and a handy search tool. Weirdly, the online apps operate a lot faster than the box’s own software.

As for picture quality, the HD-T2 displays high-definition channels with aplomb. Images boast dazzling clarity and depth, drawing objects with forceful edges and razor-sharp detail. With the BBC’s Commonwealth Games athletics coverage, for example, you can easily make out the sandy textures in the long jump pit and beads of sweat on the athletes’ faces.

Colours also look rich and realistic, from the lush green grass in the middle of the track to the vibrant yellow and green of the Jamaican team’s outfits. There’s lots of fast movement, but the HD-T2 tracks it smoothly without any obvious pixel break-up.

Standard-definition channels like Sky News and ITV2 look comparatively soft and gauzy, with paler colours and more obvious mosquito noise, but detail, colour saturation and motion tracking are good enough to keep them from being unwatchable. VuTV picture quality isn’t great either, suffering the haze and smearing common to streamed SD video, but again it’s watchable. 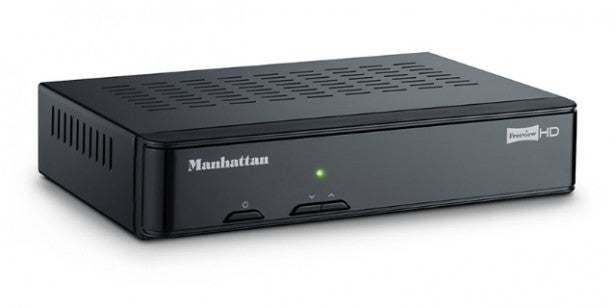 Should I buy the Manhattan Plaza HD-T2?

The HD-T2 has its flaws, but there are enough positives to make £50 feel like money well spent. For starters, the inclusion of online apps and support for VuTV is a real bonus for the money – all of which operated without any problems during our test – making it a terrific option if you want to bring smart functionality into a second room.

What’s more, the onscreen menus look great, picture quality is impressive and there’s a generous array of sockets that caters for both HD and non-HD TVs.

However, we have reservations over the unit’s sluggish behaviour, which makes onscreen navigation a chore at times, plus the plasticky remote and lightweight bodywork are a little disappointing.