What is Manfrotto PIXI Mini?

The PIXI is the latest mini tripod to be launched by Manfrotto. Acting as a replacement for the Manfrotto MTT2-P02, it’s designed as a lightweight, portable support for a large variety of devices ranging from CSCs (Compact System Cameras), Bridge Cameras, the iPhone (with the KLYP peripheral) and entry level DSLR’s.

The PIXI is designed primarily for CSC’s and at this function it excels, offering a small yet elegant body (weighing only 0.23 kg) consisting of stainless steel giving a premium finish, whilst not sacrificing stability. The PIXI includes a standard 1/4 inch screw attachment supported atop a rubber circle and metal swivel ball.

The plastic legs extend to one position at a length of 13.5 cm and have smaller rubberised pads to ensure maximum grip. Manfrotto also claim that the PIXI can be used for video work, “close the legs to use it as a comfortable grip to capture great videos…” The grip itself is highly comfortable to hold, especially when using the lightweight cameras attached to it, however when you begin to attach heavier cameras such as the Sony Cybershot DSC-RX1 or even the Canon 100D, the grip becomes far more unsustainable for long shoots. 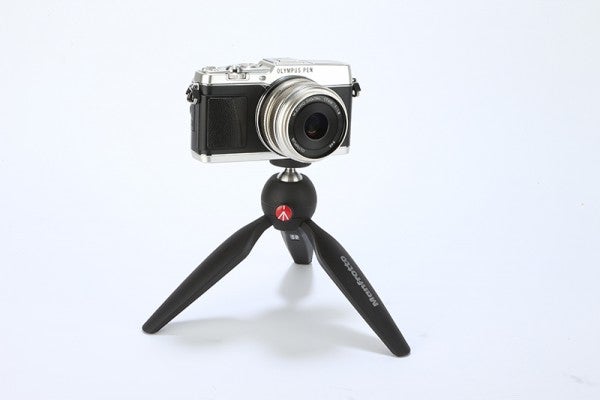 The ball is operated using a small push-button mechanism, allowing the user to rotate the camera 360° and provides a 35° tilt range, which is far more limited than its predecessor. Once the head is in the desired position the button can quickly be released to lock the head into position.

Nonetheless, the button is highly stiff to operate making the changing of the head’s tilt and rotation a clunky affair, but does ensure that camera remains fixed and is unable to move whilst in use and may become a smoother experience after consistent operation. This ungraceful performance however makes it highly unsuitable for video use, making pans, tilts and other shots highly unmanageable and inconsistent. Although when attaching a heavier camera such as the 100D the ball is able to swivel with greater ease.

The PIXI costs £25 – putting it within the same range as the versatile and popular Joby Gorilla Pod as well as its predecessor (MTT2-P02). When you consider its forerunner offers a more refined movement and is built to a similar standard, we’d be tempted to look at the Manfrotto MTT2-P02 instead.

In conclusion then the PIXI is highly limited in features and fails to secure any dominant characteristics amongst its competitors, with no control over the tightness of the ball and restricted handling features meaning it doesn’t warrant a purchase over the MTT2-P02. But the PIXI is a solid and stylish product, with a sleek design that will provide suitable grip on most surfaces, along with it being very simple to use, you can definitely consider slipping the PIXI back into your pocket after a days shooting.