If you buy a professional quality tripod – and if you’re serious about your photography why would you consider any other kind? – it will usually come without a head, which you’ll have to buy separately. This is because there are several different kinds of head available, suitable for different tasks and types of camera. You may also want to buy your tripod from one manufacturer and the head from another, which you can do thanks to one of the few instances of true inter-brand standardisation, the 3/8th-16 head mount thread. 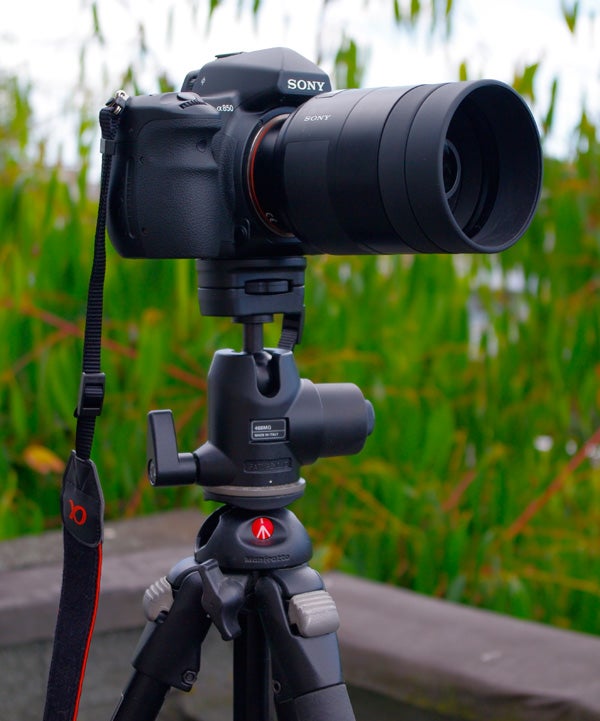 If you have a good quality film or digital SLR or a medium format camera you’ll need a fairly heavy duty head, especially if you often use large zoom or telephoto lenses. Traditionally supporting a heavy camera has always meant using a three-axis pan-and-tilt head, but these are difficult to adjust quickly which is a problem if you’re trying to pan and tilt simultaneously, for example to track a bird taking flight. However modern materials have led to the development of good heavy-duty ball-and-socket heads, such as the latest and most advanced product from Manfrotto, the 468MG Hydrostatic Ball Head. 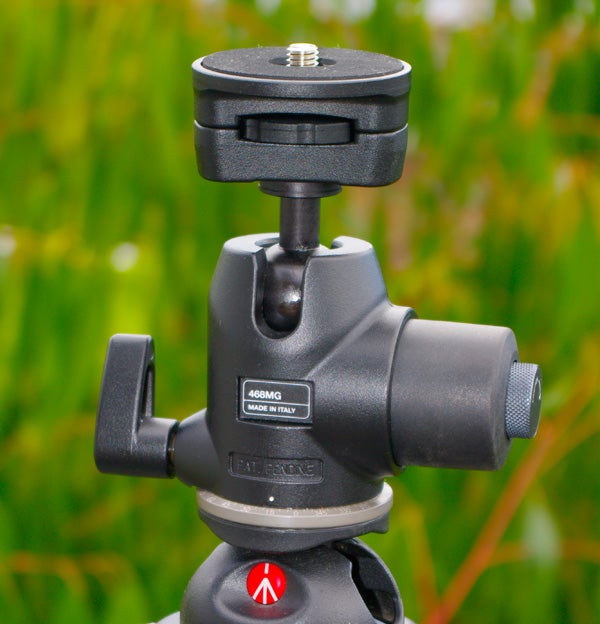 The 468MG is designed to support large SLR or medium format cameras fitted with heavy telephoto lenses, and can handle a weight of up to 16Kg, more than enough for even the heaviest DSLR. The Canon EOS 1D Mk IV weighs just under 1.2Kg, and even a big professional telephoto lens such as the £10,000 EF 800mm f/5.6 L IS USM only puts the total weight up to 5.7Kg, well within the 468MG’s specification.

The 468MG achieves its impressive load capacity thanks to its size and exceptionally tough construction. It’s a physically large head, measuring 13.5cm top to bottom, and weighs 650g, only 100g lighter than the classic 804RC2 pan-and-tilt head, so it’s not really one for lightweight hiking. Due to its size it’s really only suitable for use with larger tripods such as the 190 or 055 series. 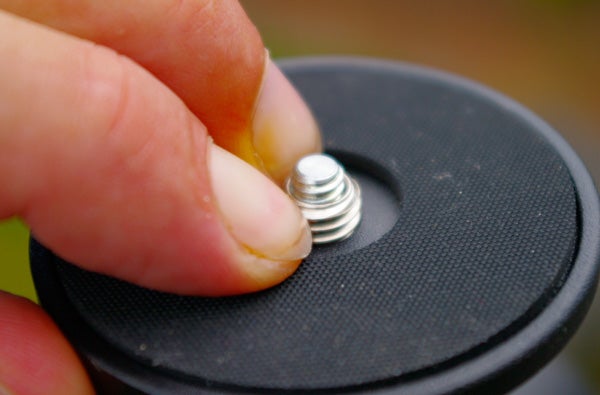 The camera mounting plate is a 6.5cm-diameter disk with a deep textured rubber insert that grips the base of your camera very securely. It can be used with SLRs that have the standard 1/4-inch tripod bush thread, or with larger format or video cameras with a 3/8th-inch thread, thanks to an ingenious spring-loaded retractable outer thread ring. The thread is tightened by turning a wheel under the mounting plate. The 468MG is also available with any of Manfrotto’s four types of Rapid Connect quick-release mounting plates. 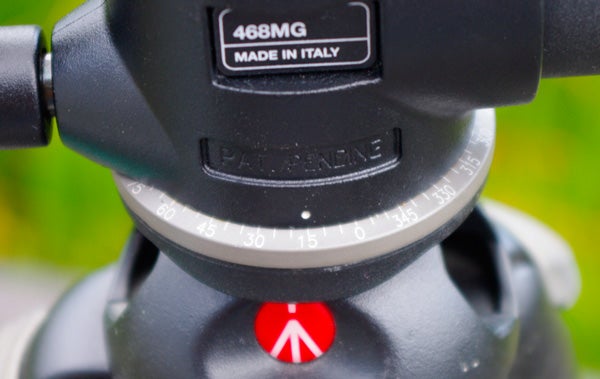 The main body of the 468MG is a solid casting of light but extremely strong magnesium alloy, with a large 4cm diameter Teflon-coated aluminium ball. The body has two slots allowing the camera to be tilted up to 90 degrees in either direction. It has a locking lever on one side which lets the whole head rotate on its base, allowing the camera to be panned smoothly through 360 degrees.

The really clever part of the design is the two-part control on the side of the body. This consists of a large rubber-coated knob which locks or releases the ball. It ha a very short travel, which means that the ball goes from moving freely to locked rigid in about a quarter turn, which is great for rapid adjustments. In the centre of this knob is an adjustable friction control, which determines how easily the ball moves when released. By careful adjustment of this control it is possible to set the tripod up in such a way that it will provide just enough movement to track your subject, but enough rigidity for a shake-free stable shot. 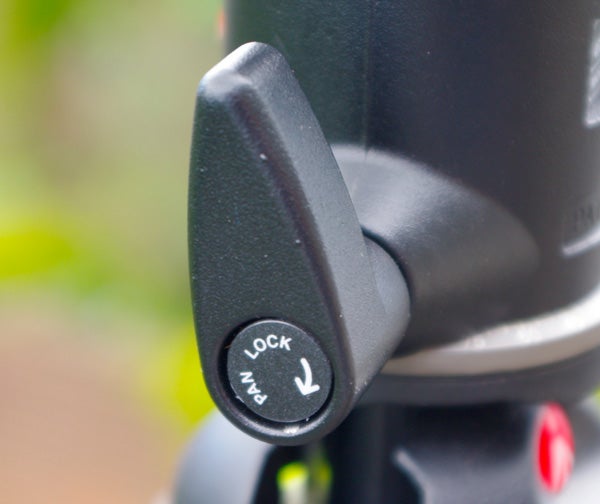 It is this precise hydraulic pressure adjustment that is the key feature of the 468MG, and it does work extremely well. The friction control has a stiff ratchet action, so once it’s set up the way you like it it’s not likely to be disturbed by accident. It is easy to use, extremely effective, and provides a combination of heavy-duty support, freedom of movement and total versatility that will be welcomed by wildlife, sports and action photographers. 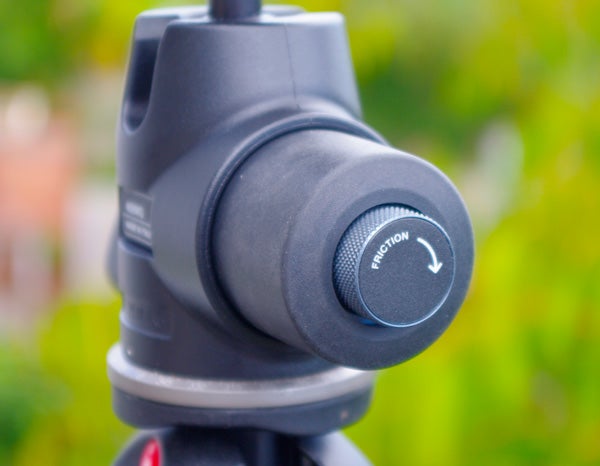 As well as this you get Manfrotto’s usual bomb-proof build quality, with all the metal parts coated in a tough scratch-resistant matt black powder finish. Like most of Manfrotto’s range the 468MG is designed for professionals, and so naturally it isn’t cheap. It costs around £170, more than the cost of complete tripods from some rival manufacturers, and I wouldn’t expect that price to drop significantly. However it does come with a three year warranty, which as a long-time Manfrotto user I’ve never had occasion to use. The 468MG is a professional quality head that will provide years of reliable service.

The new Manfrotto 468MG ball head is a superb piece of kit for anyone using a larger DSLR or medium-format camera for wildlife, sports or action photography. Its impressive load capacity, rugged build quality and the ease of use of its unique hydraulic friction control give it immense versatility and will win over even those who wouldn’t normally consider a ball head.