I could have subtitled this one: ‘or how I stopped worrying and learned to like an American football game’.


For me, the test of a truly great sports game is whether it’s compelling enough that even people who aren’t huge fans of the sport can get involved. For instance, I can rarely be bothered to even watch Wimbledon, yet I love Virtua Tennis 3 to bits. I’m fairly agnostic on football, but I can happily waste a few hours away playing FIFA. I don’t think I’ve ever watched a single game of basketball, but that’s never been a barrier to my enjoyment of the NBA or NBA Street games. Once upon a time I got so addicted to Links and PGA Tour Golf (as it was called then) that I actually started playing and watching the real thing. 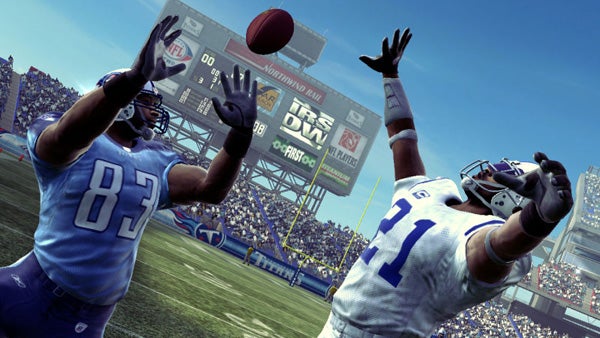 American football games, however, have always been impervious to my efforts – until now.


This is partly a result of EA’s attempt to overcome the biggest problem affecting its current wave of sports titles; after you’ve established what you can do with a new generation of console hardware, how do you make this year’s update different to and better than the last? Sure, you can enhance the graphics, tweak the gameplay and add new game modes, but is that enough to get the same people who paid £40 last year to cough up another £40 now?


The Madden series, like the FIFA and Tiger Woods franchises, offers an additional quandary: these games are already so rich/bloated in terms of features, that anything new you add runs the risk of making the game, its controls and its menus so complex that anyone new to the game won’t have a hope of getting into it that quickly.


The solution presented in Madden 09 is reasonably ingenious. It still includes the richest selection of game modes you might see in any sports game, plus all the tactics and statistics that hardcore fans of this spectacularly stat-obsessed sport demand. On the other hand, it bends over backwards to get new and less knowledgeable players involved. In the US, EA’s marketing team has been pushing this as the Madden you can play with your girlfriend, and while I’m glad to say that they’ve abandoned this a) slightly sexist and b) hopelessly unrealistic line over here, I can kind of see what they’re getting at. 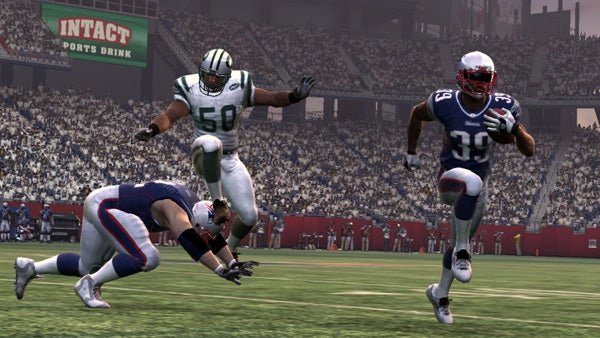 The key to all this comes right when you first boot the disc, the game immediately offering up a ‘Madden IQ test’ designed to work out how well you know and how proficiently you can play a Madden game. This consists of a series of simple exercises played out in the new virtual training centre, which brings the game back to a stylised VR version of the abstract figures and fixed camera angles that we would have seen had we picked up a Madden game in the pre-Playstation era.


The game watches and analyses how you mark and tackle on the defensive side and how you pick our receivers, time passes and sprint for the touchline on the offensive side, then uses the data to work out your Madden IQ. This then becomes the basis for how the game sets its difficulty level, giving players with a genius level Madden IQ a tougher challenge than those who are, in Madden terms, cretins.

As you play Madden, your IQ increases or (more rarely) decreases, meaning the game should constantly adjust to give you a decent time. The virtual training centre, meanwhile, is available between games to help you brush up your skills or iron out the wrinkles that are preventing you from getting further in the game.


It’s reasonably effective, but there are foibles. For some reason I scored spectacularly well in the defensive tests, and even though I then did very poorly in offensive play I still ended up with a Madden IQ that didn’t accurately represent my utter uselessness as a player. As a result, when I started playing proper games I came away with scorelines where I didn’t give away a huge number of touchdowns, but where I seemed incapable of gaining more than a few yards. 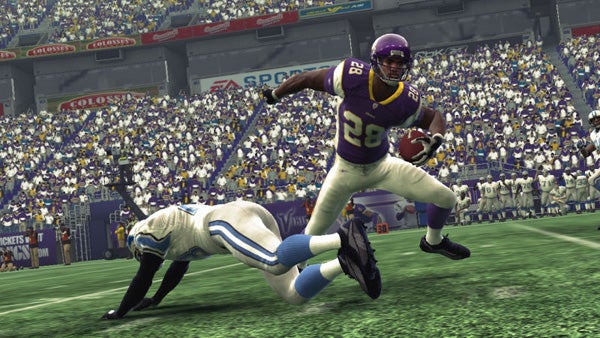 Frankly, new players will need all the help they can get, because Madden still isn’t the easiest game to get your head around unless you have a pretty solid working knowledge of American football. The US sport has evolved into a more tactical, stop-start affair than our nearest equivalent, rugby. Working out which play to call for the current situation takes a certain level of experience, and that’s before you get into tweaking that play through audibles (last minute changes made by the quarterbacks to capitalize on defensive weaknesses).


It might take you even longer to get an eye for which receiver is best positioned to actually catch the ball and run with it, as this requires you to make split-split-second decisions as to where your blockers and their defenders will be in a moment’s time. The game makes choosing your receiver as easy as possible with clear button prompts over player’s heads and intuitive play selection menus, but it still takes practice to get decent, let alone perfect. 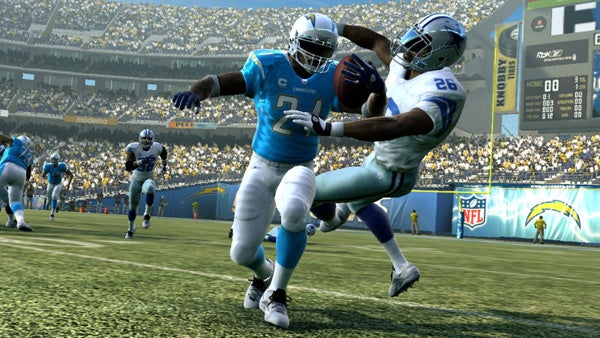 Yet within an hour or two of play something happened to me with Madden 09 that has never happened in an American Football game before – I settled into the aggressive stop/start pace and started having fun. I began swapping safe strategies for more audacious (and rewarding) tactics. I developed a feel for defensive formations and offensive plays. I could even begin to get my head around receivers, blockers and positions. Somehow, the adaptive difficulty level and virtual training centre seemed to be rewiring my brain.


And once that starts, you get to revel in the bit that EA always gets right: the presentation. Graphically, this is the most accomplished sports game I’ve ever seen and one that sets a high benchmark for new iterations of FIFA and NBA. Some of the light and reflection effects are more hyper-realistic than lifelike, but as two teams of 11 players collide or your wide receiver makes his heroic run for the touchline the sight is frequently breathtaking.


The slow-motion replays are the closest thing a sports game has to the car crashes in a Burnout or Race Driver: GRID – partly because the slam and crunch sound effects have much in common. At its best, Madden 09 plays like a short burst of panic strategy followed by an even shorter burst of action, the rhythm getting more and more satisfying the more you get used to it.

Long-time Madden aficionados will probably notice a range of enhancements that went right over my head, but the one you can’t miss is the BackTrack feature. US sports are notoriously obsessed with post-play analysis and statistics, and BackTrack reflects this with an annotated blow-by-blow look at the last play where commentator Cris Collingwood not only takes you through what you did but also what you might have done.


Again, it’s a solid teaching tool that helps you work out where you’re going wrong and how to fix it. Weather effects have been improved, too, including some very impressive snow, and Madden now follows FIFA in having an interactive celebration feature, where you can choose how your player handles their self-congratulatory boogie in the endzone. 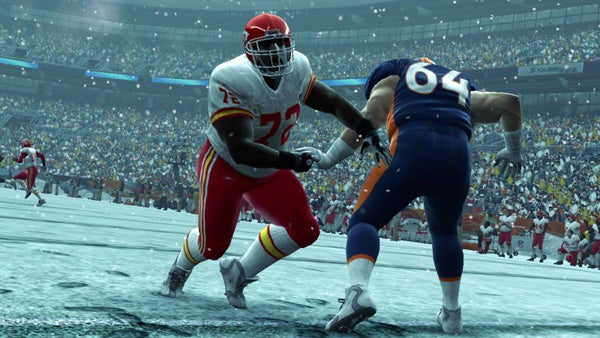 Needless to say, there’s a ridiculous amount of depth here. You can play individual games or take a team through the superbowl – complete with some fairly in-depth management options – but you can also create a player (using EA’s established ‘GameFace’ technology) then take him through the college draft via a series of mini-games before signing up with an agent with the aim of catapulting him into the big league.


You can choose to handle as much or as little of the management and player transfer side as you wish, cut down the superbowl to its minimum or enjoy the whole season in all its stages: the choice is yours. And that’s possibly the best thing about Madden 09; it gives new players or the less hardcore fan a way in, but doesn’t take anything away from the more committed American Football nut. Miraculously, this even extends to online play. Even with the Madden IQ stuff I couldn’t hope to win a game against experienced Madden players, but I certainly didn’t get as much of a kicking as I expected (and probably deserved). 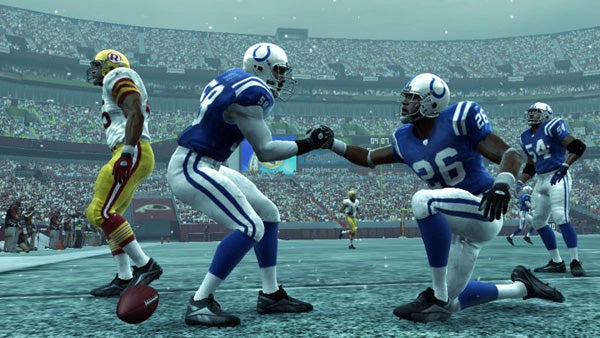 EA might not have been able to soften out Madden’s steep learning curve altogether – and it’s unlikely that anyone with zero interest in American football will have their mind changed – but this is still the most accessible and enjoyable video game take on the sport yet seen. That might not be enough to put it up there with Virtua Tennis 3 in my personal pantheon of gaming greats, but it’s more than enough to make it an easy TR Recommended.