The first GPS device I ever owned wasn’t a car sat-nav – they were far too expensive back in 1997 – but one designed specifically for hiking and outdoors activities. It was a Garmin GPS 12 and it served me well on many a walking and biking trip. But times move on and with the prevalence of GPS receivers in phones and the cheapness of GPS pucks, anyone can have GPS without having to pay through the nose for it.


It’s made life tough for manufacturers of traditional hiking devices. But companies such as Garmin, Magellan and Lowrance continue to produce them because there’s always going to be someone who needs a device that’ll take a few more knocks than the average smartphone – and will provide useful features on rather than off the road. Lowrance’s iFinder Expedition c aims to do exactly that. 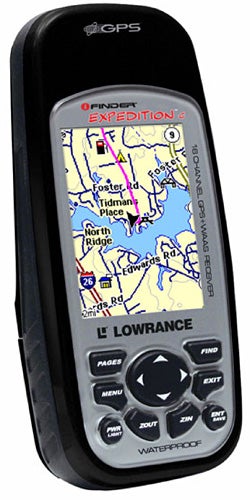 On first impressions, it’s most certainly not the most exciting piece of technology you’ll ever come across. The casing is all cheap-looking, shiny plastic, adorned with graphics and lettering that look like they could have been put together for a GCSE DTP project. It’s about as far from pocketable as you’re likely to get, measuring a chunky 30mm at its thickest point, 142mm tall and 64mm wide. The screen is a large 2.8in, but this doesn’t explain the huge dimensions as there’s loads of space around the screen. Turn it on and you’ll quickly discover that the base maps included are very basic indeed – running to country boundaries and the odd city in Europe – unlike most Garmin and Magellan products, which at least have major roads plotted, or the Satmap Active 10, which has an OS road map with the option to add full OS mapping as well.


But you don’t necessarily buy a device like this for its style or technological toys – you buy it because you need reliable, accurate position data quickly, in a device that’s easy to operate in potentially treacherous conditions. And on these counts, the Expedition c fits the bill much more snugly.

To suit its remit the iFinder is light and tough. In fact, it’s waterproof to a metre’s depth (the IPX7 standard). I dunked it in a sink full of water and it continued to operate during and after its soaking and, courtesy of the wonderful British weather, it shrugged off a couple of downpours without any problems at all. There’s a thick rubber strip wrapped around the edges of the iFinder, which makes gripping it with gloves easy, and gives it a modicum of protection in the event of a drop. And, in a nice practical touch, the Expedition c is powered by a pair of AA batteries, which will last for up to 14 hours of continuous operation. As devices such as these are often used in locations far away from civilisation – and power points – it means you can keep it running wherever you find yourself. After all, AA batteries are easier to lay your hands on than a compatible power point when you’re in the back of beyond in Nepal. Sailors will also be pleased to find that the Expedition c also comes with a 12V car adapter.

The screen is another example of thoughtful design. It might not be the most stunning example, offering just 256 colours but it is transflective, which means that (unlike the Satmap’s screen) it’s easily viewable both outside and in without the need for a backlight. This really comes into its own when the sun is bright – to see the Satmap’s screen you have to shade it with your hand, while the Expedition c’s is perfectly clear.

Ease of use is excellent as well. All too often, hiking GPSes such as this have impenetrable menu systems that are impossible to understand without a degree in rocket science. Not so here. Each of the buttons of the front is clearly labelled and the menus are easy to understand. There may be a bit of a learning curve if you haven’t used a hiking GPS before, but I found it easier to use than my old GPS 12, and on a par with the eXplorist devices from Magellan, more recreational Garmin devices and the Satmap Active 10 I reviewed a few months ago.

And, once you’ve spent a little time with the device, you’ll discover all sorts of nice touches: holding the Pages button down while in sleep mode temporarily activates the compass mode – useful if you’re trying to eke some more battery life out of the iFinder; while pressing Exit four times in a row launches a speedo mode. I also liked the fact that the map screen can be tweaked to your heart’s content, with all sorts of overlays and information available, from a transparent compass dial to latitude and longitude grid lines, altitude, odometer information and more. There’s no mucking about switching from one map datum to another – switch from UTM to British Grid and the iFinder switches the datum for you.

Features are right up there with the best recreational GPS devices too. Not only does the device boast GPS, but also a barometric altimeter – which can be used to track your altitude or plot atmospheric pressure history (and even predict the weather) – a digital compass, and extra mapping can be added to the device via MMC/SD card. A quick hunt online revealed most of the products available for the iFinder appear to be US focused, with no topographic maps available for Europe or the UK, which is disappointing. Marine maps are available for west and northern Europe, however.


But one of the device’s most interesting features is that it’s EGNOS (European Geostationary Overlay Service) ready. This is a system, put in place in recent years – and still in its experimental stages – aimed at improving the accuracy of GPS. Originally intended to assist pilots and aircraft, the system can be used by anyone with a compatible device, and despite the system not being completely finished, I found that, during tests in open countryside in northern France, that the iFinder picket up an EGNOS signal – indicated by an asterisk on the bars of the GPS status screen. 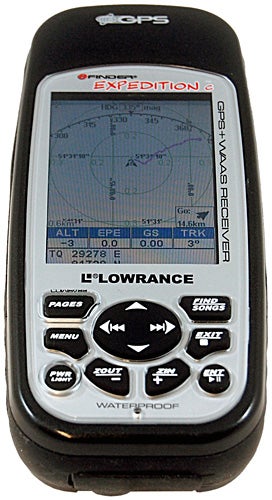 It’s difficult to know how much this affected performance and accuracy, but one thing is clear – the Expedition c is incredibly accurate and responsive – the most accurate hiking GPS I’ve used. Tracks are plotted very finely indeed, and on a quick walk to my local tube station, I was able to see precisely where I had stopped and crossed the road.


GPS performance is exceptional too, with the Expedition c picking up a full lock in ideal conditions in under 30 seconds. Impressively, it maintained a solid position under light and heavy tree cover, and more importantly with the device warmed up, the iFinder was able to pick up a satellite lock almost instantly on the rare occasion that it lost signal. Again, this easily outstrips the Satmap’s performance and bests any hiking device I’ve used.


All-in-all, the iFinder Expedition c, despite its size and ugly looks, is a highly impressive hiking GPS. It doesn’t have the fancy mapping bells and whistles of the Satmap Active 10, and it’s bulky compared to many of its rivals, but its performance is excellent and that’s what you need when you’re out on the trail.


And though £256 may seem expensive, compared to similar products from Magellan – the Explorist 500 for instance – it’s actually a lot more competitive than it looks.