Available on Xbox 360 (reviewed), PS3, PC
Looking on the bright side, Lost Planet 3 is better than we ever expected it to be. This is a series that began with a seriously flawed gem then descended into ignominy with one of the least coherent, least enjoyable sequels of this entire console generation. Lost Planet 3 is a serious improvement. It’s also a game developed by Capcom by Spark Unlimited, the brains behind Turning Point: Fall of Liberty and Legendary: The Box; two of the very worst shooters of the last decade. Lost Planet 3 isn’t nearly that bad. In fact, it’s a game we want to like. The problem is, we can’t. 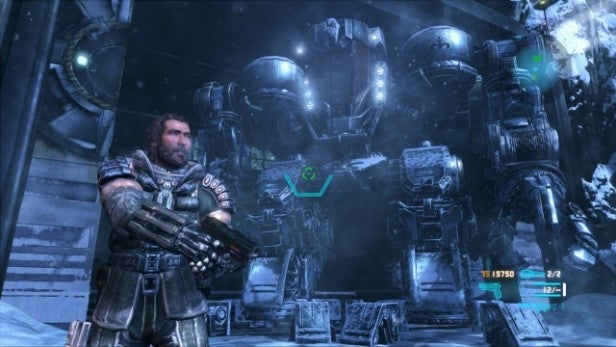 Why do we want to like it? Because Spark and Capcom have really tried to do something vaguely interesting here. While it’s clearly taken cues from other games, most noticeably Gears of War and Dead Space, Lost Planet 3 works hard to create a story about the daily struggles of life on an alien world, featuring a hero who’s no bold warrior or meathead space marine, but a contractor trying to get on with a dangerous job.

That hero, Jim Peyton, has a wife and child, a likeable can-do personality and a story arc that takes him from working guy to committed protagonist. He’s stuck on an energy-mining facility on a dangerous, deep-frozen planet, and while battling the gigantic vaguely-insectoid Akrid he still has to spend time in his giant mechanoid ‘rig’ fixing pumps and relay stations and securing anchor lines. From the videos Jim sends home to the chatter with the guys on Coronis station, there’s a real effort being made to anchor Lost Planet 3 in the details of a working life. 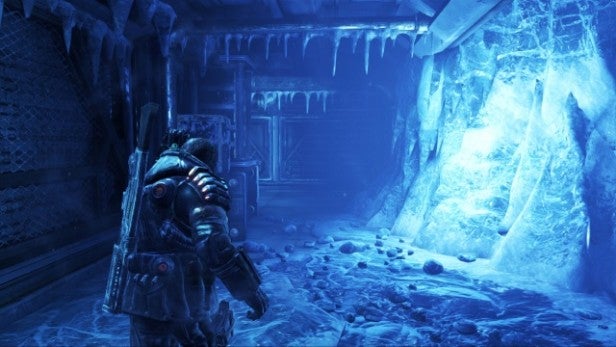 The game also succeeds in creating a genuinely alien environment. It’s a prequel to the original Lost Planet – and in some respects a reboot – and the world of EDN III is even more cold and inhospitable than you remember it. It’s a world full of Akrid-infested frozen caverns, desolate wastelands and gaping chasms, where brutal weather might descend at any minute and cause your rig to ice up, or where you could be attacked at any time by any number of huge and vicious lifeforms.

If you like science fiction, this really isn’t a bad science-fiction story. The twists of the plot are reasonably predictable, particularly if you’ve played the previous titles, but they’re still interesting to follow, and there’s a really nice shift as the game moves from fairly straightforward alien-hunting and equipment-fixing territory into something more akin to Aliens or Dead Space. The game’s cinematic qualities aren’t helped by the unnervingly dead-eyed animation, but we’ve seen much, much worse. 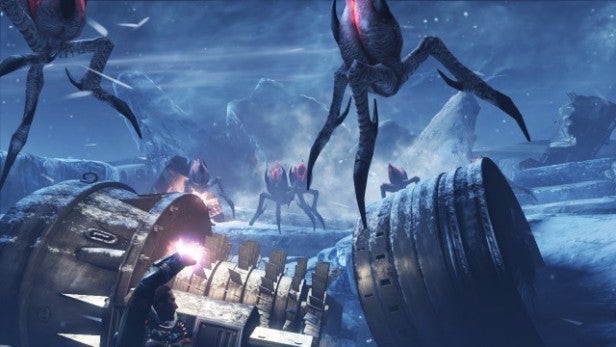 The same goes for the Unreal Engine 3 powered graphics. Lost Planet 3 isn’t exactly cutting-edge, but it has the kind of detail, the kind of lighting and the kind of high-end graphical effects you now expect from a AAA action game, and while its icy environments don’t quite stand comparison with those in Dead Space 3, they still look good. Bar some odd periods where the frame-rate goes all shonky, Lost Planet 3 works on a technical level.

Audio is another strength. The in-game music hits all the right action notes, the voicework is consistently solid and occasionally good, and there are some really nice touches, like the ability to choose songs from a playlist while you’re in the rig. Jim likes his dirty country blues, and that’s perfect for the character and the game.

Unfortunately, the problem with Lost Planet 3 is that it’s not always so great to actually play. The problems start with a rather dull, talk-heavy opening hour, and don’t get much more exciting with your early encounters with the Akrid, which consist entirely of you popping away at them with a pistol while they scuttle towards you in groups of one to three. To be honest, the combat on foot never gets much more exciting. Each form of Akrid has a recognisable attack pattern and a vulnerability to exploit, and after a while it’s just a case of rinse and repeat as you whittle numbers down and beat them back. 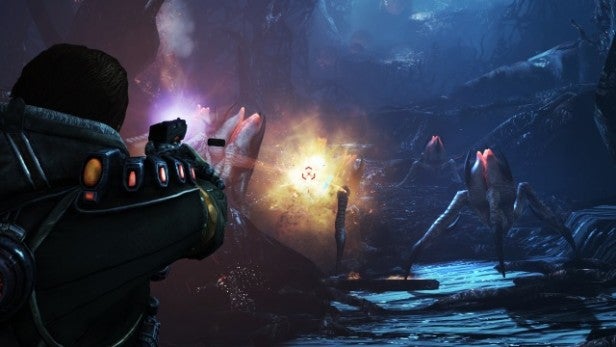 Things improve a little with more intelligent and aggressive lifeforms, but never beyond the standard of a second-rate Gears of War clone, and Spark don’t seem to able to match the big action set pieces or tense, creepy moments of the superior Dead Space 3. Key weapons, like the shotgun, are almost useless, and your hero can’t run or turn fast-enough for some encounters. The result is a run-and-gun action game where neither the running nor the gunning is any fun.

And that’s just the start. Much as we like the idea of a hero who’s just another working guy, the endless wandering around the base gets really boring, really soon. Boss battles are tiresome, the bosses are recycled and repeated several times, and some are preceded by unskippable cut-scenes that you have to sit through again every time you die. The main story missions are incredible linear and offer little real opportunity for exploration. There are side-missions to complete, but nothing more imaginative than ‘kill twenty of these’ or ‘go here and scan this’ and one or two of the characters are really, furiously annoying. You have a grappling hook, but it will only attach to certain points in the environment – infurating when you’re facing down a really huge Akrid bug and you could do with reaching higher ground. 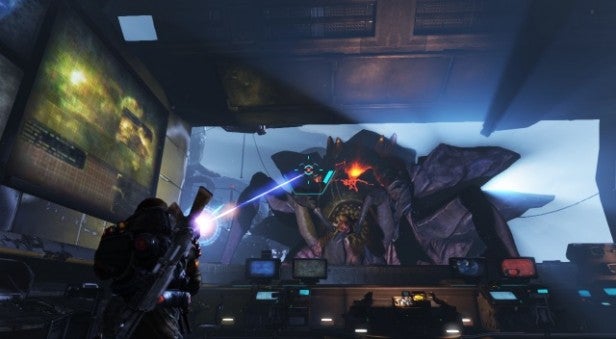 And then we come to the rig. Even though you’re expected to go out and do jobs in an extremely hostile environment, your rig is unarmed except for a claw and a drill. This leaves you at the mercy of the Akrid unless you can master the fiddly, quick-time event sequences needed to block their attacks, grab their extremities and drill their vulnerable bits. It’s hard to explain exactly how dull and irritating this can be. True, you can upgrade your rig with better armour and stronger melee attacks, but what you wouldn’t do for the chainguns and rocket launchers of the first Lost Planet. The fact that the game gives you a rationale behind their absence doesn’t make this problem go away.

That’s the problem with Lost Planet 3. As much as we like aspects of the story and aspects of the game world, the gameplay keeps on bringing us back down to Earth.

Lost Planet 3 has its plus points as a piece of sci-fi, but as an action game it’s another damp squib in a series that never seems to heat up. Likeable protagonists and an interesting story can’t make up for the dull combat, the annoying and repetitive boss battles or the sheer amount of time-wasting in the game, and it’s nowhere near as exciting or enjoyable as the broadly similar Dead Space 3. Perhaps it’s time we lost this planet permanently.