There’s no doubting that flat screen TVs have really taken off in a big way this year. The chances are that for most people who are buying a new TV, it will be LCD or Plasma rather than a bulky CRT. But when it comes to entertainment, having a big screen is only part of the equation – some would argue only 50 per cent. 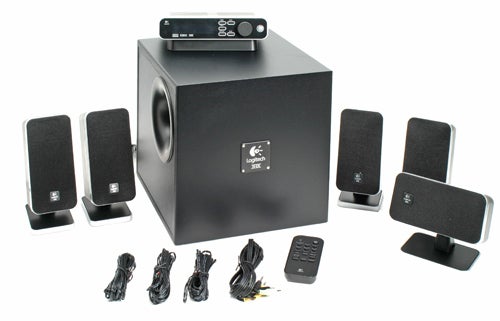 The other half is audio. The vast majority of people are quite content to simply use the built-in speakers in the TV. However, on some TVs, such as a couple of the budget ones we tested here, the quality of the audio output is less than stellar. Even for TVs where the sound quality is excellent, the best you’ll get is stereo. Certainly, some TVs offer pseudo surround modes but it’s still no substitute for a decent surround system, that can really bring alive DVDs, or even watching sport.


There are two major reasons why many people simply aren’t interested in surround sound. Firstly, it’s perceived as expensive – and with a least five speakers, a sub-woofer and an amplifier to buy, it can be. Then there’s simply the hassle. Having rear speakers means having to route speaker cable across the room, which can often be awkward and inconvenient.


Along comes Logitech then with a set of surround speakers that aims to solve both these issues in one go. The Logitech Z-5450s are a set of 5.1 speakers that offer an impressive sounding 315 watts of RMS power, but with a distinct feature. The rear speakers are wireless.

Actually, that’s not strictly true. While the front speakers are connected by physical cable to the amplifier built into the sub-woofer cabinet, the rear speakers receive their input signals wirelessly. However, they do still have a wire attached – power. With no connection to the amp, the speakers have to receive their power from somewhere so each has to be plugged into a wall socket. However, this is still an easier way of getting those rear speakers into place than having to trail speaker cable across the room.

If you’ve got the power sockets handy then set-up is truly a breeze. As well as the two fronts, two rears and the centre speaker, you get a Control Centre with a cool clear blue LCD display. It has a dial for volume, a power switch that glows red when on standby and blue when on, and five other buttons. You hook this up to the sub-woofer, and the front and centre speakers via spring clips. The wireless rears are labelled specifically Right and Left – as each receives its own directional information. 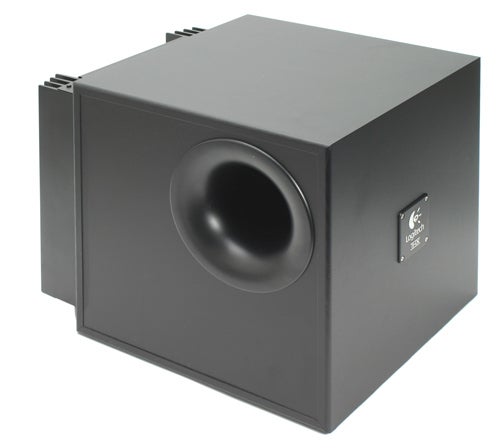 The sub-woofer is quite huge with a large port in the side and heat fins at the rear. The front is emblazoned with the Logitech logo and the famous THX badge. Once upon a time the THX badge would only be found on equipment costing thousands of pounds and it does seem to have been watered down somewhat to appear on something that’s relatively bargain basement. However, it’s still an indicator that this is a good set of speakers.


Each speaker is set on a fixed stand except for the wide format centre speaker, which can tilt up and down so you can place it either above or below your TV and aim the sound. Each speaker is held on its stand by a screw and if you remove this you can swizzle the speaker round and wall mount them, which is a great option. Logitech doesn’t appear to offer matching tall stands however, which is a shame. 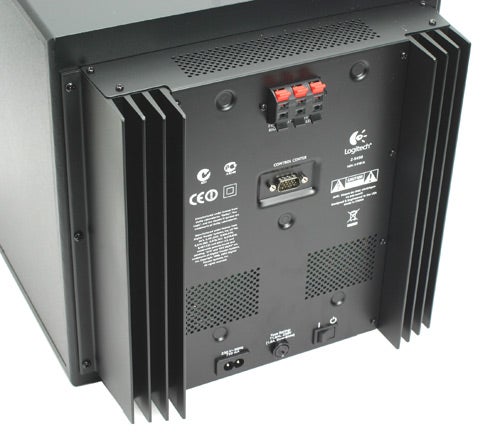 The rear of the control console has a good range of connectivity, with two Optical inputs and one Coaxial. This means you could have say, a Sky+, a games console and a DVD player all hooked up digitally at the same time. There are also three analogue 3.5mm inputs. A switch on the rear enables this to be configured as three separate stereo inputs or as a single 6-channel direct input from a PC sound card.


The supplied remote is functional and not too bad looking. Each option is easily accessible including the useful test button. It could be improved by having a backlight but even in the dark the buttons can be identified in the dark if you remember the arrangement.

In terms of processing the set has just about everything covered. It can accept Dolby Digital and DTS inputs and even DTS 96/24, a high resolution variant carried on some DVDs. The set also support Dolby ProLogic II (Music and Movie modes), which will process any stereo signal into 5.1 sound, ensuring that the rear speakers are kept busy at all times.


The antenna at the back of the Control Centre gives away that this is a wireless set. When the rear speakers are plugged in, a red light is visible through the protective grille to indicate that they are receiving power and when picking up a signal they turn blue. 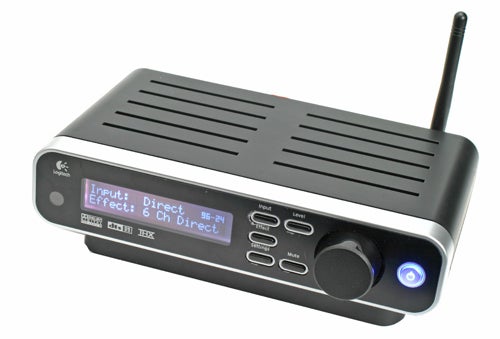 The wireless signals are sent from the Control Centre to each of the rear satellites at a frequency of 2.4GHz. If that sound familiar its because it’s the same band used by standard Wi-Fi and Cordless DECT phones. The potential signal clashes could make for an un-listenable mess so to counter that Logitech has implemented a system where the signal hops over 38 channels with the 2.4GHz band within 20 milliseconds. And it works. Logitech claims that the range of the rears is around 28 feet, but can work up to 100 metres, which is plainly overkill for this type of system.


In my lounge, with the Control Centre sat right next to a Wi-Fi Router and a DECT cordless telephone base station, I had no problems getting full audio to the rears with no discernible audio delay. Listening closely, there was a low level hiss in each rear speaker that wasn’t present in the fronts, but if you can hear this in quiet scenes you’re sitting too close to the speaker anyway. 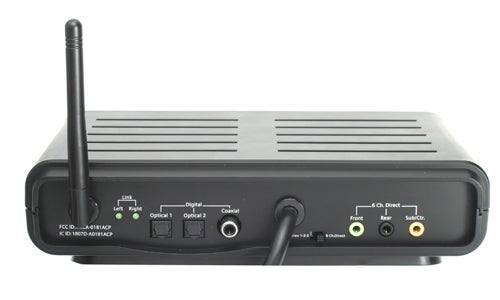 Overall, sound quality was very impressive. The power was certainly there in all scenes, and there’s plenty of clarity. There was a decent amount of mid-range and good highs and I never felt anything was missing. There’s no equalizer but you can boost surround and bass levels independently.


The Pro Logic II setting does at good job at mixing stereo into 5.1 and I was happy to leave it enabled. Dolby Digital really fills up the sound-stage, while as expected, DTS really takes things a step further. Listening to the space battles in Star Wars: Revenge of the Sith and the Lord of the Rings: The Two Towers, the audio was involving and compelling and I found myself quickly drawn into the action as all good surround systems should do.


Of course, the latter features a Discrete 6.1 DTS mix, but there are only 5.1 Discrete speakers in this set. Inevitably a third rear speaker would put strain on a wireless set-up and as it would be located in the middle and require power, much of the convenience of the wireless rears would be lost. If you’re keen on genuine 6.1 or more though, you’ll probably we willing to spend more time to integrate a fully wired setup.

While interference on the rear speakers wasn’t an issue, it certainly had one major side affect. I run a Wi-Fi connection in the same room and was used to being able to stream video content over the network to my Media Center PC under the TV. However, with the speakers on this proved impossible. The battle for the 2.4GHz frequency band severely reduced Wi-Fi speeds. The wireless adaptor on my PC dropped from a full 54Mbps signal to a only 1 or 2Mbps every time the speakers were on. While this was enough for regular web browsing it completely knocked video streaming and wireless file transfers on the heard. Turning the speakers off and all returned to normal. It was a black and white, on/off situation. 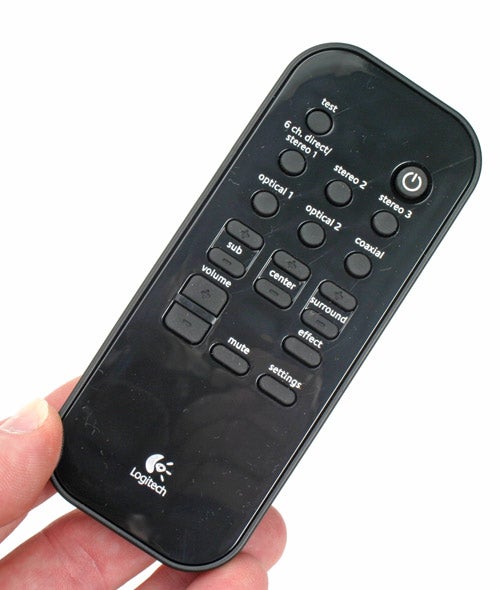 That aside the Logitech Z-5450 are hugely impressive, especially when one takes the price into account – you can pick them up online for a little over £200. At that kind of price and considering the quality and convenience, these are an absolute bargain.


As long as you don’t have to have maximum Wi-Fi bandwidth while the speakers are on, these could be the speakers that bring surround sound into a great many homes, and for that Logitech ought to be applauded. 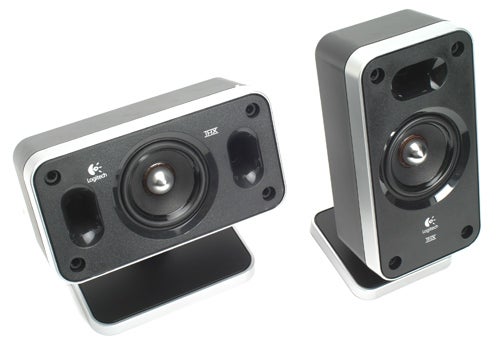 Inevitably, purists will turn their noses up, but if you’re a person that has to deal with the WAF (Wife Acceptance Factor) or just don’t have the time or patience to faff around with ripping the carpet up then these are just the ticket.


Thanks to rear speakers that only require power and receive their signal wirelessly Logitech has produced a set of surround sound speakers that have a vastly increased chance of gaining the WAF (Wife Acceptance Factor). The drawback is that due to signal contention Wi-Fi bandwidth is drastically reduced when the speakers are on, which will prevent video streaming. Unless that’s a deal breaker, this set comes highly recommended.