Media streaming devices tend to be jacks-of-all trades, masters of none. They focus on the sexy business of streaming video, but as a result, tend not to do other media – audio in particular – full justice. But some products have bucked the trend, choosing to stream audio and audio alone, and the most successful in the past couple of years have been the expensive but undeniably desirable Sonos Digital Music System, and the Slim Devices Squeezebox 3.


I was a big fan of the latter’s open source approach and fantastically useable design, even if it was a touch expensive. So I was concerned last summer when peripherals giant Logitech bought out the firm responsible for the Squeezebox. Would Slim Devices and its quirky products simply be absorbed into the corporate morass? Well, the latest incarnation of the Squeezebox proves that I needn’t have worried. 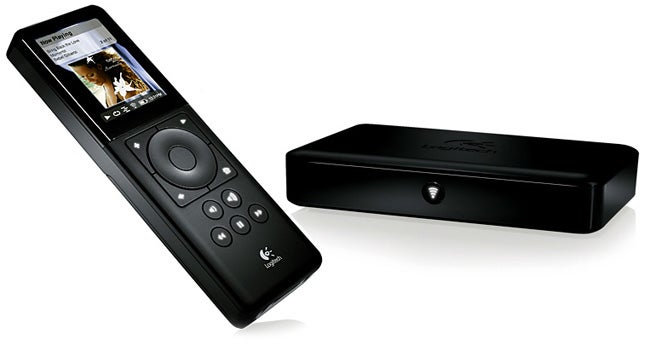 The Squeezebox Duet is an altogether different beast to the original Squeezebox, which was a product more in the mould of traditional hi-fi component, albeit it a fairly forward-looking one. The main unit, incorporating a gorgeously clear and luminous vacuum fluorescent display, was hooked up directly to the hi-fi and controlled via infrared remote.


The Duet, however, sees the Squeezebox split into two parts. The Receiver deals with the business of streaming audio – over 802.11bg Wi-Fi or Ethernet – receiving data and converting it into a signal your hi-fi can understand. On its rear are stereo phono outputs for this very purpose, and also both types of digital output – optical and coaxial – so you can bypass the Receiver’s DAC electronics and use a stand alone DAC or your home theatre amp’s decoder circuitry. Either way, it gives you huge flexibility.

As a bonus, the Receiver module, as with the earlier Squeezebox, can act as a wireless bridge, allowing other non-wireless devices with Ethernet ports to access your wireless network. This could save you a bundle on buying the wireless adapter for your Xbox 360 or PS3, for instance, if your AV setup is nowhere near your router and broadband connection.


The really clever stuff, however, now resides in the remote control which has gone from AA battery-powered infrared unit to something altogether more exotic. The most obvious difference is that it has a 2.4in TFT screen of its own for browsing your music library and selecting tracks from the palm of your hand. Though the original Squeezebox’s display was good, this is better, and the new scroll ring control makes traversing long lists of albums and tracks simple. It can’t be clicked like an iPod’s, but it comes close to the clickwheel’s pick-up-and-play functionality.

The build quality is exemplary too: the remote has a heft that makes it feel expensive and a gloss finish that won’t look out of place in even the trendiest of Grand Designs-style living rooms. There’s more luxury in the form of a motion sensor, which automatically switches the screen on when you pick it up. The battery is rechargeable too – you simply drop it into the equally stylish cradle to recharge it when not in use. Perhaps the only disappointment is that the old number pad mobile phone-style text search isn’t possible any more, what with no numeric keypad, but then you can’t have everything.

The good news is that the new Controller and Receiver are backwards compatible with previous models, such as the Squeezebox 3 and Transporter and can be synchronised with other players too, so all devices play the same tune at once. Not only that, but the Controller can also be used to control those older devices – all you do is simply switch between them on the handset’s menu. It can do this because the Controller doesn’t talk directly to the Receiver, but via Wi-Fi to the server software – SqueezeCentre 7 – on your source device, which then passes instructions to the selected player. 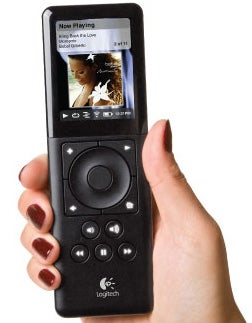 And the features that made the previous models so usable are also still present. Unlike so many video streaming boxes, tracks can be browsed, queued and playlists created as others are playing. Tags are recognised, as is album art, and you can also browse by folder, or search by keyword if that doesn’t work.


Integration with Rhapsody, and a number of other music services, such as MP3tunes Music Locker, is beautifully carried off. These services enable you, for a subscription of around £6.50 per month, to search for and play back tracks from a huge vault of music direct from the remote without having to have your SqueezeCenter server turned on at all. There’s also an enormous list of Internet radio stations, plus by adding the AlienBBC plugin you’ll be able to access all the BBC radio stations and the corporation’s ‘listen again’ service too.

Audio format support is superlative – another advantage over do-it-all video streaming boxes. Not only are the usual suspects played natively – WMA, MP3 and AAC – but also Musepack, MP2 and the open source Ogg Vorbis. There’s wide support for lossless formats too, for the audiophile crew. Flac, Apple Lossless and WMA lossless can all be played, as well as the uncompressed formats – AIFF, WAV and PCM.


And sound quality is good from the Receiver’s onboard DAC too. It’s actually a touch inferior to the Burr-Brown DAC equipped Squeezebox 3 – music has slightly less definition and clarity at the top end – but it’s a close run thing. In back to back tests, the difference was barely noticeable as I pumped up the volume on Newton Faulkner’s cover of Massive Attack’s ”Teardrop”. It has a good solid thump at the low end, a smooth, listenable mid-range and zingy top-end. 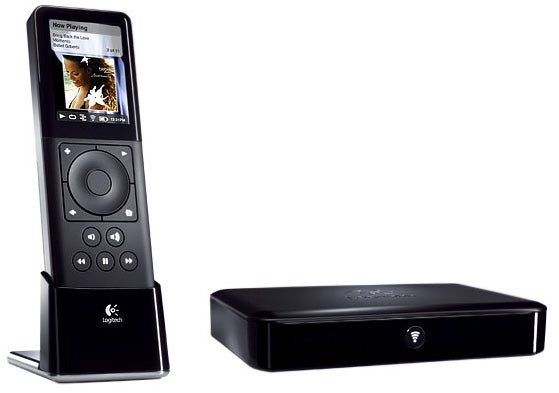 Even a complicated piece of music like Mozart’s ”Requiem” didn’t faze it and it was only when I moved onto some jazz – from Stacey Kent’s excellent ”The Lyric” album – that the differences between the players became apparent. The Receiver has a little less presence; a little less three dimensionality than the Squeezebox 3.


But if you’re serious about listening at CD quality, of course, you’ll go out and get yourself a dedicated DAC or hook it up to your home theatre amp – neither the Wolfson chip in this player nor the Squeezebox 3 can match the punch, timing and atmospherics of a similarly priced dedicated separates CD player – but for casual listening it’s fine.


The two things that could possibly be held against this player are, first, its lack of UPnP compatibility – you’re stuck with SqueezeCentre (though there are versions available for Linux as well as MacOS and Windows) – and second, its high price. But even though £279 seems like too much for a system without a hard disk, and one that doesn’t do video, consider this: it is significantly cheaper than Sonos’ similar system (the Sonos remote alone will set you back this much), and it’s just as good. In fact the Duet is, simply put, one of the best bits of audio technology I’ve ever played with and that, for me, justifies the extra cost.