The Logitech Pure-Fi Express Plus is a cheap and cheerful iPod dock that has a built-in alarm clock and can also be run from batteries. The unit is quite compact, and its design is quirky in that it has speakers that fire sound out both front and rear to help it better project audio around a room. Despite this, it’s still very affordable, as you can buy it for around £50 from sites such as Amazon. 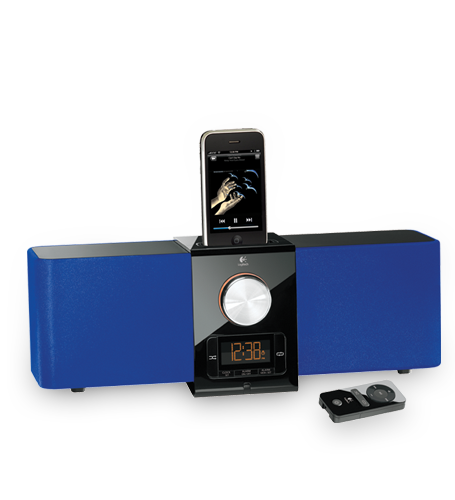 Design
The Express Plus is quite small for a dock. It measures just 349mm wide and stands a mere 127mm tall. It’s available in five different colours – black, blue, orange, pink and purple – but the only difference between these models is the colour of the cloth used to cover the speaker grills. We had the blue version in for review.

Taking the Express Plus out of the box it’s immediately pretty clear that this is a budget rather than premium dock. While its build quality is reasonable, it doesn’t feel anywhere near as solid as some of the high-end docks we’ve seen recently and the materials and finish look a little bit cheap. However, it’s pleasant enough to look at with the polished black finish used on the central part of the dock contrasting nicely with the matt finish on the tops of the speakers. 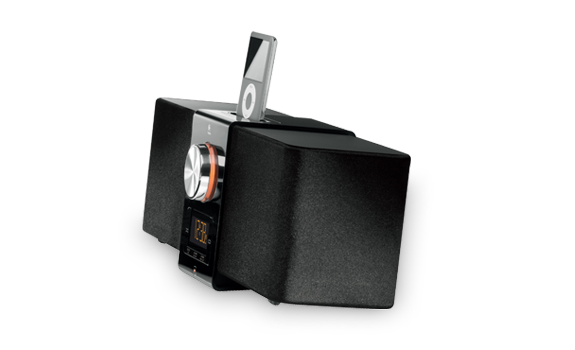 The front houses a large volume dial that has a chrome finish, and beneath this there’s an orange, alarm clock style display used to show the current time. Flanking the display are dedicated buttons for switching between repeat and shuffle play modes.

At the bottom of the control panel there are three buttons for setting the time, setting the alarm time and turning the alarm on and off. Setting an alarm is simply a matter of holding down the Alarm Set button and then entering the time you want it to go off at. The alarm function only sounds a built-in beeper, and unfortunately it can’t be used to start playing tracks on your iPhone or iPod. 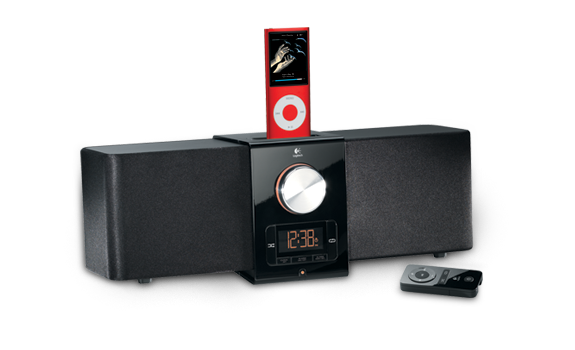 There are no playback controls on the dock itself. Instead these are found on the remote. In truth the remote control is a little bit disappointing. We can forgive the fact that that it’s really very, very small – standing not much taller than a match box – but it’s the Spartan controls that are the main issue. Apart from basic play/pause, track forward and backwards and volume controls, the only other features it gives you access to are the repeat and shuffle modes. There’s no way to move through the menus of your iPhone or iPod — instead you have to just get up close and personal and actually prod your iPhone or iPod’s screen.

Connectivity and battery life
The rear of the Logitech Pure-Fi Express Plus is home to a standard 3.5mm auxiliary input jack, so you can feed audio from non-Apple devices through the speakers. However, if there’s a device in the dock this auxiliary input is disabled, so you can’t just switch from one source to the other. You have to actually take your iPod or iPhone out of the dock to get audio from this auxiliary port. Next to this input there’s the power socket. The power supply isn’t built-in, but the wall adapter PSU is quite small and comes with a longish 1.75m lead, so this isn’t a problem.

On the rear there’s a cut-away that acts as a handle to allow you to more easily cart I about. This unit can actually be used on the move because it can run on batteries as well as from the mains. The battery compartment is found on the bottom of the Express Plus and takes six AA batteries. When running on battery power the system doesn’t charge iPhones and iPods, so as to save power and prolong its battery life. Logitech says that it should keep running for around 10 hours, but obviously how long you get from it will at least in part depend on what volume level you’re using it at. Like a seemingly increasing number of docks we’ve used recently, when your phone is plonked in the Logitech Pure-Fi Express Plus’s socket at the top it doesn’t actually feel like it’s actually held in place all that well. Also, if you get the placement slightly wrong you can end up with audio coming out of just one speaker. To be fair this is as much an issue with the iPhone connector as it is with these types of docks, and it does have good compatibility. The system works with all iPhones, iPod touch models and nano models, and iPod Classic 80GB, 120GB and 180GB models are supported too. 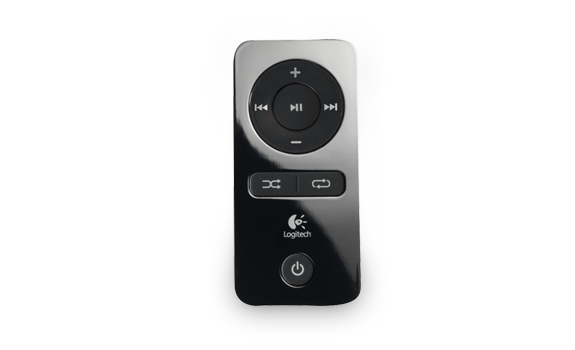 Sound quality
When it comes to sound quality, naturally you have to take into account this unit’s low price tag. It certainly can’t compete with higher end-models in terms of audio fidelity, but it does stack up pretty favourably against other docks in its price range. Logitech has done a decent job of getting better than average bass response from the small speaker drivers, so it manages to avoid the thinness that afflicts the audio on some other low cost docks we’ve tried.

It has good mid-range presence too, so vocals and guitars cut through the audio mix fairly nice. However, we felt its performance with highs lacked a bit of crispness.

The omni-directional speaker set up, where around is fired from both the front and rear of the unit, does seem to help it deliver a slightly wider soundstage than you’d expect from a box of this size. However, it’s not the loudest dock around and certainly isn’t going to fill a decent-sized room if you’ve got a party going on.  Also, the bass does start to distort once you pass the three quarters level on the volume dial.

Verdict
The Pure-Fi Express Plus isn’t exactly a world beater when it comes to sound quality. However, for a budget model it doesn’t actually sound that bad, as its speakers produce reasonable levels of bass. We also think its compact size, built-in alarm clock and ability to run on battery power make it quite a flexible little dock. All in all, it’s not a bad option, especially if your budget is tight and you don’t need a dock with deafening levels of volume.