We don’t often have recourse to review alarm clock radios. Yet every now then an exception comes along and the Logitech Pure-Fi Dream is one such example. Its £169 MSRP and online asking price of around £155 will certainly raise a few eyebrows, though, so what can it do that can possibly justify such a lofty price?

Predictably there’s an iPod dock, when isn’t there one? This supports most iPod iterations with dock adapters for each, the only exceptions being the first, second and third gen iPods. These and other MP3 players can be connected via the 3.5mm auxiliary jack on the back of unit. As support does include the iPod Touch, iPhones, including the iPhone 3G, will work as well, though you will be prompted to put your phone into flight mode since support isn’t complete.


Naturally enough there’s an FM/AM radio tuner, too. It’s a shame not to have DAB, or the option for it, but it would inflate the price considerably. You can switch between stations using the provided remote and it’s a rather smart affair, too. Buttons are backlit orange and an intelligent and thorough button layout allows you to perform more or less any function using it, just like a proper Hi-Fi. 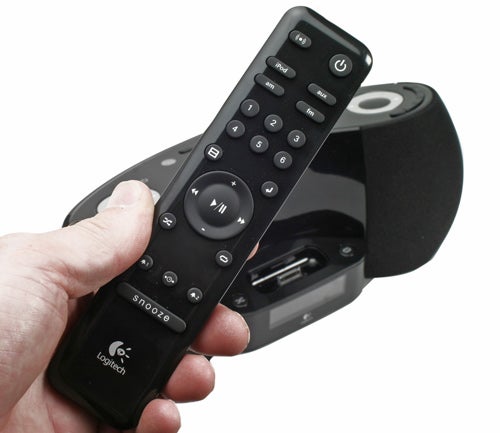 Indeed, if anything the Pure-Fi Dream is almost a mini Hi-Fi replacement for the bedroom. We only say “almost” because another Pure-Fi product, the Elite, has this honour, but if you actually want something smaller than a mini Hi-Fi but with comparable audio quality, the Pure-Fi Dream ought to have you covered. Featuring two 3/4in tweeters and two “long throw” woofers, this is no pint-sized tin box and it can reach some ear splitting volumes – not that this is any sign of quality. We’ll be bending our ears back to judge on that a little later on.

First, though, let’s take a closer look at the unit itself and just to re-iterate: this is no pint-sized tin box. It’s really quite big and heavy, big enough that it would take up most of the space on your average bedside table. Likewise, the power supply is huge and all this presents a bit of a problem for an alarm clock radio, but things are redressed somewhat by the provided remote that features a large friendly ‘Snooze’ button to match to that found at the top of the main unit. This means you don’t have to put it on your bedside table to get the full benefit of its features.

Despite its size the Pure-Fi Dream retains the classiness we’re accustomed to seeing from Logitech products. Its curvaceous bulges and glossy black finish look sleek and stylish so it does at least look like it’s worth the asking price. Like the buttons on the remote, all function buttons on the top are backlit orange – an effect that’s activated by motion sensors. This is handy if you’re tying to hit the buttons in the dark, though if you are, you’re clearly getting up far too early! 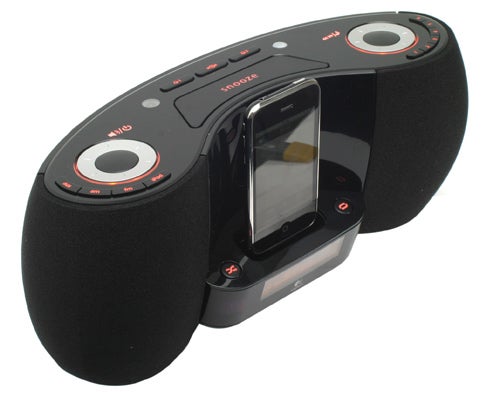 For all its attractive touches and backlit buttons, there’s a lot of practical good sense in the Pure-Fi as well. For example, there are two large click wheel-esque dials for quick and easy control of volume and seek functions and the ‘Snooze’ button is as large and easy to hit as it possibly could be. These dials also make it very easy to quickly set alarms and you can have up to two different alarms at any one time.


These are mapped to two buttons just above the ‘Snooze’ button and all you need do is hold one down to begin the process. You can also choose between a buzzer, a radio station or your iPod for your wake-up call. Perhaps the neatest thing in this respect, though, is that the Pure-Fi Dream has its own battery. Thus, if the power is cut off by an apocalypse, be it man-made virulent plague, a nuclear winter or just a nasty bout of global apathy, then you needn’t worry about being late for work! 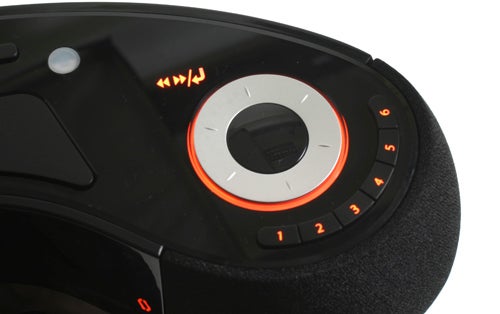 Meanwhile, on the font, is a well proportioned and backlit display. In iPod mode it displays track information or a somewhat superfluous spectrum analyser and using the remote you can adjust bass, treble and screen brightness levels. There’s also an ambient light sensor that ensures the display doesn’t remain on full brightness in the dark. 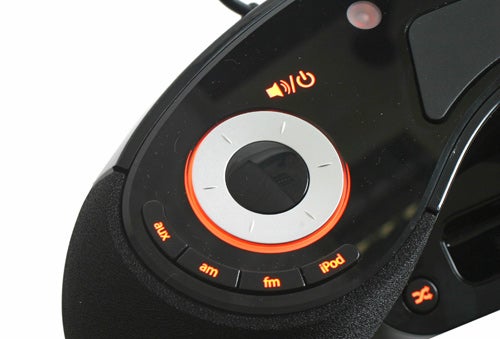 On the plus side there’s no annoying external antenna and radio reception is good in spite of this. There’s even a small reception meter on the display so you can assess exactly how good your fix is and adjust accordingly. Here the dial controls again make fine tuning blissfully easy, negating the need for unreliable auto-searching.

Having covered every conceivable crevice of the Pure-Fi Dream, it is best we address the one thing that might justify that £150+ price tag: sound quality. It’s good news, too, because the Pure-Fi Dream delivers the kind of acoustic performance that makes you think it might just be worth the money Logitech is asking for it. 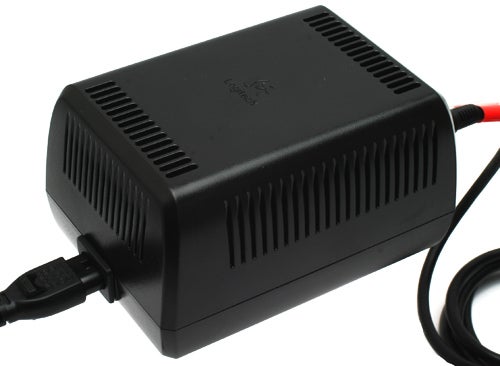 It’s not that the Pure-Fi is outstanding in any specific way, but that it manages to be very good in almost all departments and deal with a wide range of musical challenges with relative comfort. Be it the punchy beats of Basement Jaxx’s ‘Good Luck’, the rockier vibe of The Foo Fighters’ ‘Pretender’, or the placid tones of Death Cab For Cutie’s ‘What Sarah Said’, the Pure-Fi Dream rarely struggles to produce a well balanced and defined sound with no shortage of subtlety either.


For instance, though bass levels are by no means thunderous, there is an underlying warmth to the sound that’s very pleasing. Crucially, this isn’t achieved at the expense of clarity and both percussion and vocals are given their own space. Naturally, given the size, the sound isn’t as wide as it might be using a separate set of speakers, but the Dream does feature a stereo expander for those times when a wider sound stage is required and it does a pretty good job. 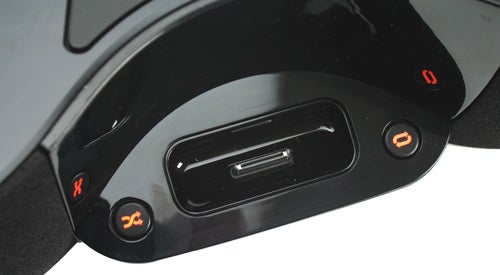 Were one to be hyper critical of the sound produced by the Pure-Fi Dream, bass does tend to become a bit boomy at higher volumes, but the bass control means this can, to a greater extent, be smoothed out. Moreover, there are few instances where you’re likely to reach volumes high enough for this to be a problem. Overall, the Pure-Fi Dream delivers a level of sound quality that only a would be audiophile would sniff at and though it’s unlikely to best a reasonable quality dedicated Hi-Fi it does a pretty good impression of one.


Whether this is enough, however, to justify the price tag rather depends on your needs. Like the (article:Logitech-Pure-Fi-Mobile Pure-Fi Mobile), the price makes the Dream a little more niche than it might otherwise be since it’s by no means an impulse buy, but if you rely on your iPod and like the idea of something simple, powerful and versatile to replace a bulky mini Hi-Fi, then the Dream is a great option. If not, something like Philips’ excellent (article:Philips-AJ300D-iPod-GoGear-Clock-Radio AJ300D iPod Clock Radio) might be worth a look. 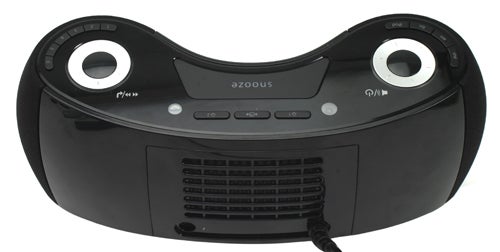 
The price means it’s not for everyone, but if the Pure-Fi Dream’s plentiful mix of features and impressive sound quality are the answer to your prayers, you won’t be disappointed.