Much as we like some of the touchpads on laptops, like
those on the Samsung Series 9 or MacBook Air, as a navigation device even the best of them are usually still
inferior to a mouse, especially when using an interface like Windows. Of
course, if you’re on the move, the last thing you want is a large, clunky
mouse.

Thankfully, there are plenty of tiny, light choices out there. One of
these is Logitech’s new wireless, ambidextrous M325, which aside from its traditional
Logitech trademarks such as ergonomic comfort, micro-gear scroll wheel and ridiculously
long battery life, offers a number of unique, snazzy designs. We find out if it’s
all style and no substance. 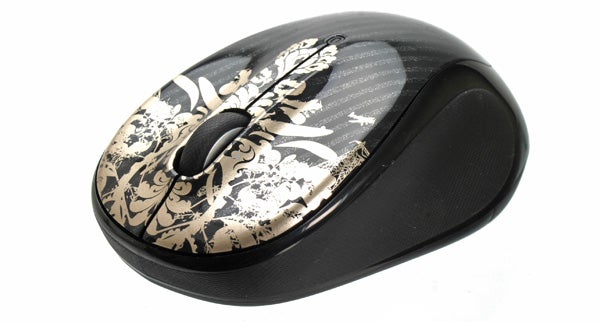 First, let’s talk visual impact. Though it’s also
available in plain blue-grey and stealth black, the M325 is part of Logitech’s
limited Colour Collection range for a reason. The top cover, i.e. the part that’s
covered by your hand, can be bought with various designs (though it is not, as
far as we’re aware, user interchangeable – a bit of a missed trick though it
probably means better build quality).

The first is stylised red-and-black flowers on a white
background (called FingerPrint Flowers); the second – our review sample – is an
abstract gold organic floral pattern on a background of black and subtle
gold-sparkling-grey stripes (Victorian Wallpaper); then there’s a blue
background with dark-blue nature patterns and white handwritten text (Indigo
Scroll); and finally, a simple purple model with crazy paving outlines in white
(Purple Boulder).

Apart from the latter, these patterns are interesting and
original enough to make them worth considering. The closest we remember seeing
to them is the interchangeable ‘art’ lids Dell offers on some of its laptops,
like the XPS 15 with its customizable or pre-selectable Design Studio lid ‘tattoos’.

The rest of the M325 mouse consists of a glossy black cover
surround that’s remarkably hand-grease resistant, a soft black rubberized grip
that runs from right to left, and a hard-wearing matt base. Build quality is superb, and the little rodent
survived a few trips in our bag – thrown in with some cables and plugs – without
marks or scratches. And at 90 grams with receiver, you’ll barely notice it’s
there.

As far as comfort goes, the M325 is probably about as
good in the hand as an ambidextrous/symmetrical model this small (less than
10cm) can be. The curved rubber sides provide a good grip for your thumb on one
side, and the ring and little fingers on the other. Surprisingly, we didn’t
find it hugely more comfortable than the simpler Logitech V550, though that’s just a testament to how nicely that mouse lay in
the hand to begin with. For stints on the train, plane or bus it’s more than
usable, though for long-term desktop use we found it doesn’t provide quite
enough palm support.

A simple-to-open panel in the M325’s base gives access to
a single AA battery. This means that once the provided alkaline battery is
drained, it’s easily replaced with an affordable, long-life rechargeable such
as an Eneloop. Either way this rodent won’t have too much of an impact on the
environment, as Logitech claims a single battery will last up to a whopping 18
months!

Obviously we couldn’t test this claim if we wanted to bring you our review
anytime this year, but we have found the company’s battery life claims to hold
up fairly well in the past. There’s a handy little off switch on the M325’s
base too, if you won’t be using it for a while. 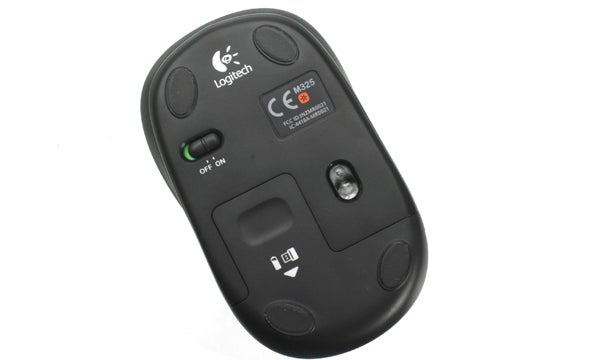 Also behind the battery panel, you’ll find the slot for
storing the USB Nano receiver, which plugs into your laptop or desktop PC to
allow the mouse to communicate wirelessly.  To be honest we would have preferred an
exposed slot you can just stick the dongle straight into, as found on the Microsoft Wireless Mobile Mouse 6000, but overall it’s a minor quibble. As
seems to be the standard on high-end wireless peripherals these days, the
receiver is tiny, measuring 18mm from tip to tail. When plugged into a USB
port, the protruding bit is a mere 7mm. 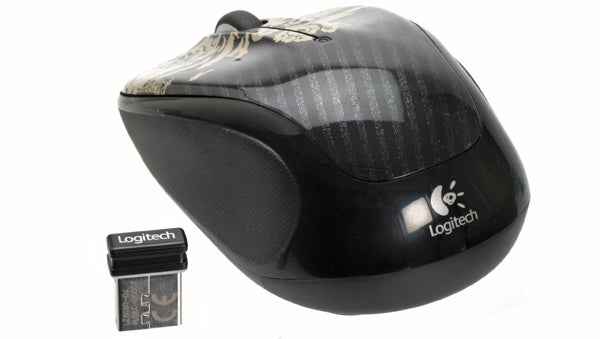 As is typical for the majority of Logitech’s wireless
gear, the M325 uses 2.4GHz RF technology rather than the more complex Bluetooth,
so it also offers longer range, and we had no trouble using the mouse from over
10 metres away. Thankfully, and this is a major benefit over rivals, the
receiver is of the ‘unifying’ kind, which means it can be used with all recent
Logitech RF keyboards or mice. Just ‘program’ the device into your single
receiver using the appropriate Logitech software and viola, one-for-all.

Only when we come to the mouse’s sensor do we find our first
disappointment: it uses an 1000dpi optical sensor, rather than the newer and
more accurate laser variety. Let’s put this into perspective for a second
though. On most surfaces and for most tasks, optical is more than adequate.
After all, this isn’t a gaming or performance beast. But with the likes of
Microsoft’s 6000 rival using BlueTrack, which can track across virtually any
surface with better accuracy to boot, it is a limitation worth keeping in mind.
We would love to see a mobile mouse that utilizes Logitech’s Dark Laser tech
for tracking across glass.

One unique Logitech mouse feature we are simply in love
with is its micro-gear scrolling wheels, and the M325 is no exception. Though
it doesn’t let you switch between Hyper-Gear and notched scrolling (for more on
which, have a read of page two of our Logitech Cordless Desktop MX5500 review), it instead combines the two. Thus,
careful movements will give stepped feedback with accompanying clicks, while a
more enthusiastic flick will result in scrolling at hyper speeds with inertia.

It’s a beautiful system that adds a whole new level of
ease and usability to trawling through long documents or lengthy web pages, and
the advantage of combining them over dedicated modes is that it leaves the
scroll wheel free to act as a button, rather than as a switch on the portable Logitech V550. 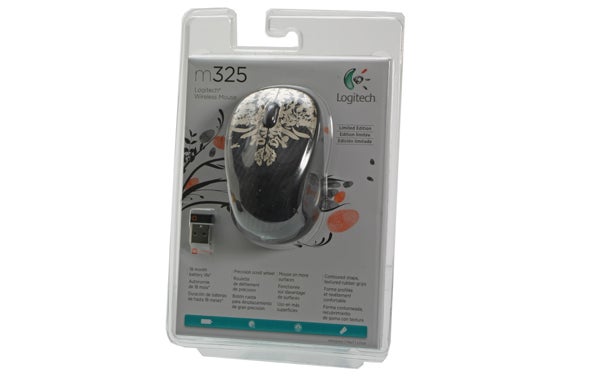 Logitech’s signature rubber finish on the wheel is the
cherry on the icing. Likewise, it’s nearly a given that any Logitech rodent
will have responsive buttons with a nice mix of travel and click, as is the
case here for both its regular right/left buttons and its wheel. Our only
complaint is that we could have done with one extra button, set for example
below the scroll wheel, that would be programmable using Logitech’s excellent
SetPoint software.

Overall then, usability is as good as you’re likely to
find on a portable mouse, though the sensor’s limitations need to be kept in
mind if you want a peripheral you can use on surfaces like marble, glass or
carpet. 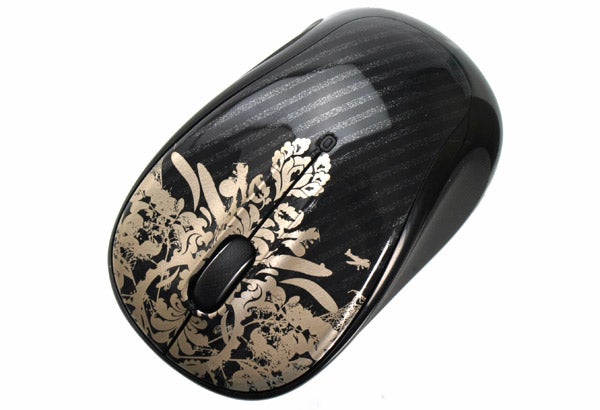 It will set you back anywhere from £22 to £35, depending
on the design you’re after. At £25 (the cheapest for the limited edition
models), we reckon it’s very decent value, even if you go for the plain variety.
However, it’s not without stiff competition from Microsoft’s £27 Wireless Mobile Mouse 6000. Basically, if you want the snazzy designs,
unifying receiver and/or sweet micro-gear scroll wheel, go for the M325. If on
the other hand you need a mouse that can function on almost any surface, the
6000 is your rodent.

Quite aside from the unique designs across its top, Logitech’s
latest ambidextrous portable wireless mouse is comfortable to hold, features an
evolutionary combined micro-gear scroll wheel, lasts up to 18 months on a
single AA battery and uses a unifying Nano receiver. The M325’s only potential
weakness is that it sports a ‘dated’ optical sensor, but for most folks that
will still be more than adequate, especially given the affordable starting
price.