Keyboards. In all honesty they’re not very exciting. Except for this one. With ‘K750 Solar Keyboard’ Logitech has grabbed us by the scruff of the neck and shouted “Get a load of this!”


What is ‘this’ exactly? The descriptive name tells you the basics. It is a solar powered keyboard. What the fairly soulless branding doesn’t imply, however, is what a remarkably good job Logitech has made of it.

The positive impressions start the moment you begin unboxing. Logitech has used minimalist recyclable packaging and it could almost fit through your letterbox. Open it up and you’ll find the setup instructions, support numbers printed on the box itself – there is no manual or CD. Four pieces of reclaimed cardboard hold the keyboard in place and just the keyboard, its wireless receiver and a wipe cloth are enclosed. It’s elegant and an PVC-free example to others how a little bit of thought can go a long way.


Lift out the K750 and the first thing you’ll notice is how thin it is. At just 7.5mm thick it is certainly the slimmest keyboard we’ve have seen, but it feels no less durable for it. A near unibody design means the K750 suffers from none of the creaks, groans and rattles of a typical keyboard and you will want to fondle it in a way that is positively indecent.


Build quality aside, the second thing you’ll spot are the two long solar strips. Here is where the magic happens. Much like any other solar device, the K750 uses light (both sunlight and artificial light) to charge its internal (but removable) battery. Where it differs is what Logitech says this solar technology can achieve. In contrast to the typically weak stamina of most solar products, the K750 is exceptional.

Logitech claims the battery can last for up to three months in total darkness. This should satisfy everyone outside of the Arctic Circle. Meanwhile in average daily use it is purported that the K750 battery will never run out. Given there is no power cable supplied with the keyboard this is a boast in which Logitech is supremely confident.


So that’s the theory. How is it in use?


As you might expect from the tone of this review, the K750 is revelation. This begins with installation. Simply switch on the keyboard and plug in the tiny wireless receiver. A driverless install completes in less than a minute then the Solar App (just 3MB, pictured below) downloads and installs automatically. You’re done. 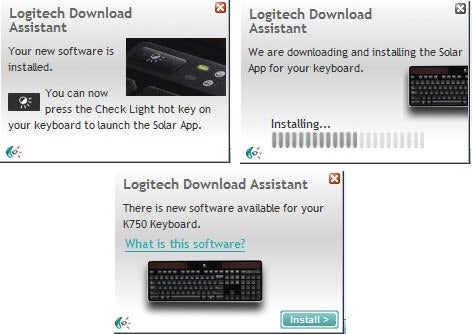 Since we’re on the topic of the Solar App let’s take a closer look. The app is started by pressing the dedicated solar button (top right, above the number pad). It displays the dynamic light levels (measured in lux) that the keyboard is receiving. Below this is the battery life (which can be toggled to show the battery life over one, three or 12 months) and a report on the battery status. It is simple and nicely designed.

So what do we learn about Logitech’s ambitious battery claims. Quite frankly for a product designed to last months at a time without any light whatsoever it is hard to gauge in the short term. What we can tell you is in a week’s worth of journalist-quantity typing (going on for 8,000 words) the battery has never dropped below 100 per cent. The keyboard is positioned in a room where there is an external light source, but it receives little direct sunlight. It seems there is every chance the K750 will never need mains power.


The freedom this creates is fantastic since the keyboard is instantly tethered to whatever the tiny USB wireless receiver is plugged into. This makes it great for multimedia setups and is particularly useful when you grow weary of typing on a laptop, especially smaller netbooks. The receiver itself also has a nice touch. Logitech dubs it the ‘Unifying receiver’ and that is because it will happily pair with multiple Logitech wireless peripherals. This frees up USB ports, something that is especially handy for laptops. 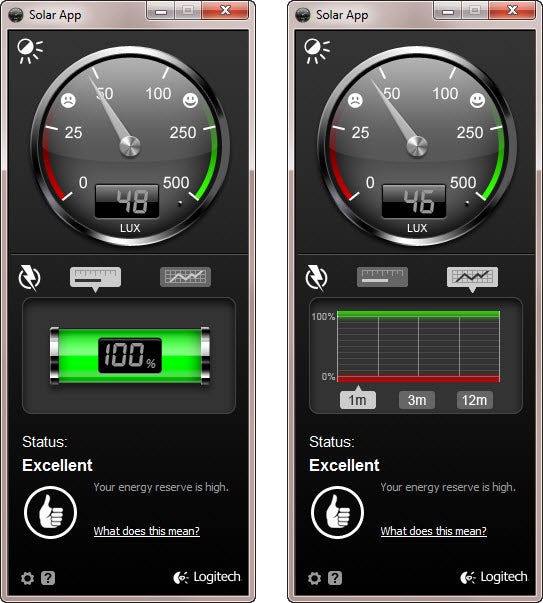 As for range, the receiver uses 2.4GHz wireless which means you’ll get obstruction free range of around 30 feet and even get away with a single wall in the way. Quite how you’re meant to see what you’re typing in this scenario is another matter. There is virtually no input lag and I found it flawless for gaming (at least to my gaming standards).


So all this and no talk of how good this fancy keyboard is at ”actually being a keyboard”. Happily we’ve left the best until last. With the growing dominance of laptops, Logitech has consciously gone for a chiclet design which makes switching between a modern laptop and this keyboard a breeze. As the marketing brags: “it almost feels like typing on your laptop, but more comfortable” and that hits the nail on the head.

The reason for this comfort is twofold. The first is the incurve. While most keyboards dip heavily in the middle the K750 keys are more subtle – as if you’d pressed your finger tips gently into a soft surface. This makes them cushion your fingers better and you feel a grip for the keys earlier.


The second element is the action of the keys themselves. For such a thin keyboard there is a remarkable amount of travel, not too much (about 5mm), and the keys then quietly spring back in such a manner than your fingers don’t lose contact with the key on the way back up.

The effect this creates is an ability to dance from key to key, there is no stabbing action from one to another. For touch typists this is perfect because the extra duration of contact means your fingers spend less time airborne meaning less chance of losing your positioning and consequently making mistakes. Heavy typists will also be keen to learn that the traditional keyboard weakspot, the space bar, is just as well balanced as the rest of the keys. 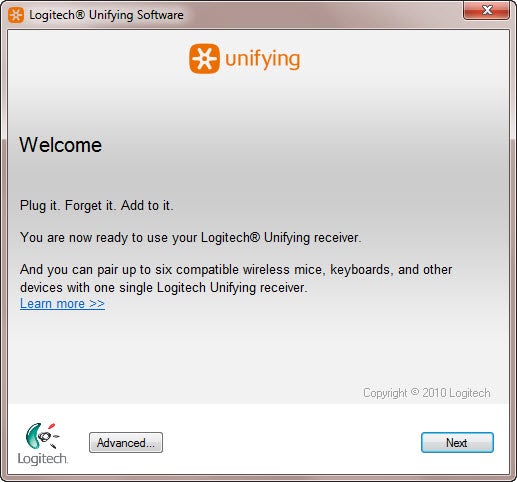 All of which doesn’t mean the K750 is completely flawless. With its design you’d think it would be targeting an Apple audience, but Logitech has yet to offer Mac drivers. It will work on a Mac, but without the useful Solar App. Furthermore at £69.99 the K750 isn’t cheap. That said for what is on offer I wouldn’t say it is extortionate, particularly for heavy typists.

The Logitech K750 Solar Keyboard is a wonderful example of smart design, innovation and practicality all combining to make a class leading product. Given the low power consumption of keyboards it is surprising in hindsight that a truly independent, high class wireless design had yet to surface. Now it has we’ll find it very hard to go back to wires or batteries. It is hard to admit, but we’re genuinely excited about this keyboard. Take one home and we’re sure you’ll feel exactly the same.