Back in June I reviewed the Logitech MX518 and declared it the best mouse that I have ever used. Shortly after that I reviewed the Razer Diamondback Plasma which failed to change my opinion about the excellent MX518. But now the MX518 has got some serious competition for my affection in the form of Logitech’s latest gaming rodent, the G5. 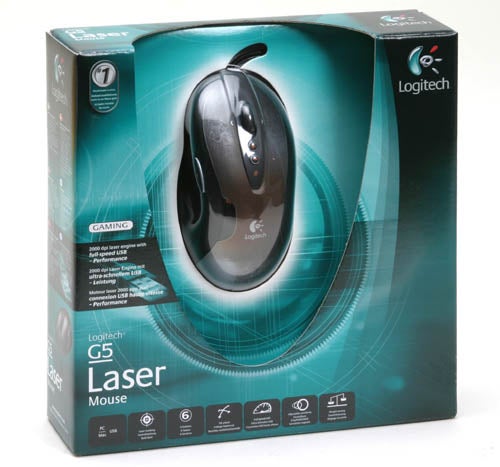 Unlike the MX518 which used a super-sensitive LED to achieve a staggering 1,600dpi, the G5 uses a laser to achieve an even more impressive 2,000dpi sensitivity. Just like the MX518, the G5 can be configured using Logitech’s SetPoint utility. In SetPoint you can configure five pre-set sensitivities which can be adjusted on the fly, making it simple to have different settings for different weapons during gameplay. This also makes it easy to drop down the sensitivity when you’re in Windows, saving you the frustration of barely seeing your mouse pointer as it zooms from one side of the screen to the other.


The 2000dpi sensitivity of the G5 really comes into its own when you’re trying to hit a tiny target from a great distance – this is something that I also found with the MX518. With an average mouse trying to zero in on a very small target can be frustratingly difficult as you can’t move in small enough increments to get the target in your sight, but with a high sensitivity mouse like the G5, you’re aiming adjustments can be so minute, that locking onto the last bad guy from 1,000 yards becomes, if not simple, definitely achievable. 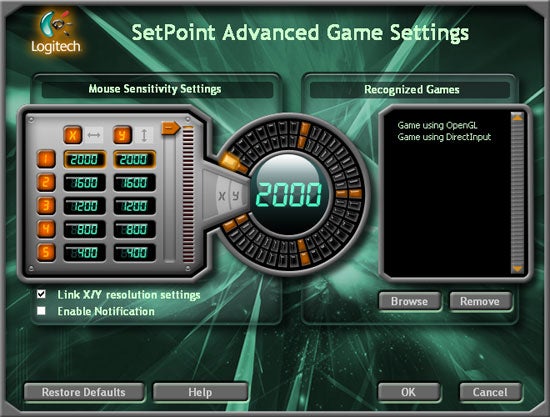 The G5 is every bit as good as the MX518 in the performance gaming stakes – whether it’s actually better from an accuracy point of view is hard to say. I will admit that I rarely have to push the G5 up to its 2,000dpi maximum, but I guess on the occasions when I do, I’m happy that the option is there. One thing that really does set the G5 above the MX518 is the ability to set differing sensitivity levels for the X and Y axis. So, if you feel that you need to be able to pan left and right faster than you need to tilt up and down, you can select the perfect balance with the G5.

One thing that’s very obvious about the G5 is that it’s a more focussed weapon than the MX518. This might sound a little strange since I definitely felt that the MX518 was a very focussed gaming mouse when I reviewed it, but the G5 is just that bit more hardcore. Let’s think of it in car terms – A BMW M3 is a great driver’s car, while also being very comfortable and loaded with bells and whistles to remind you where all that money has gone. Now consider the BMW M3 CSL – this was a special edition version of the M3 with considerably less equipment and far less comfort, but with a price tag around £18,000 higher. So why would anyone buy the CSL? Because it was a far more focussed driver’s car – all excess weight had been dumped, major body panels were constructed from carbon fibre rather than steel and the engine, steering, tyres and suspension were honed for ultimate high-speed handling. Logitech has employed a similar “less is more” approach with the G5. 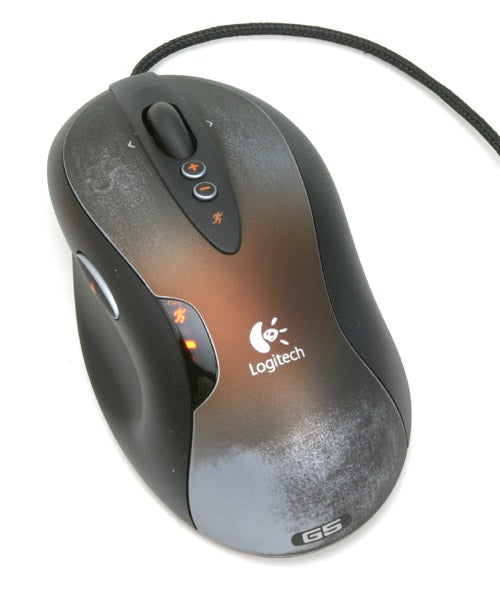 Let’s say that the laser optics inside the G5 equates to the uprated engine in the M3 CSL, but that’s only the beginning. Whereas the MX518 has two thumb buttons on the left, the G5 only has one. Also the MX518 had a handy application switching button on the top which is sadly missing on the G5. But these omissions are testament to the fact that Logitech is aiming this mouse at serious gamers and not Windows users who play the odd game. In fact, since I started using the G5 I have taken to using two mice, one standard Microsoft cordless mouse for Windows work and the G5 for whenever I fire up a game. The omission of the application switching button does bring one major advantage with it though – on the MX518 the + and – buttons for changing the sensitivity are in front and behind the scroll wheel, whereas on the G5 they are both behind the wheel and far easier to access without even thinking.

But where Logitech has taken away general mouse features, it has added some great gaming features. First up is the indicator light on the top of the mouse – this tells you what sensitivity level the G5 is set to and is ideal for “at a glance” confirmation of how fast your aiming is going to be.


But for me the most impressive aspect of the G5 is its weight customisation. Just like with a real weapon, a comfortable weight can mean the difference between hit and miss, so Logitech has made it possible for you to give the G5 the perfect weight for you. If you’ve read Lars’ review of the Logitech G7 cordless mouse, you’ll know that there’s a slot in the bottom for the rechargeable battery. Now, the G5 has an identical slot, complete with eject button, but since it’s not a cordless mouse, there’s no need for a battery pack. The slot is there to hold a weight cartridge – this orange receptacle can hold a total of eight weights in different positions, allowing the user to not only adjust the amount of weight, but also its position. Logitech supplies a steel box that holds eight 1.7g and eight 4.5g weights, allowing you to mix and match in order to find your perfect balance. 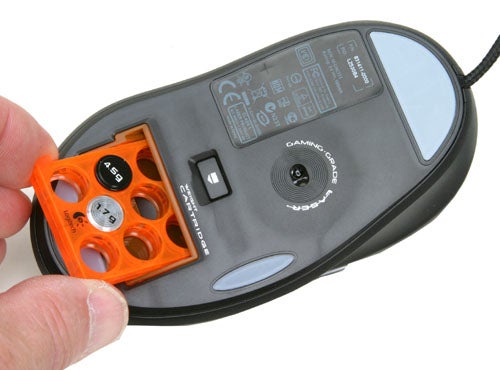 At first I thought that the weight of the G5 was fine without the cartridge inserted, but after much experimentation I have settled on six 1.7g weights down each side of the cartridge. With the weights inserted the G5 takes on a more solid feel, allowing for more accurate aiming. Going back to a car comparison again, it’s like the difference between a fully hydraulic steering rack and a fully electronic one – the former just gives you so much more feel, allowing you to react to changes in road surface and traction before things get out of hand. To me the idea of being able to balance the weight of your mouse is such a great idea that I can’t believe it’s taken this long for a company to try it.

Unlike the latest crop of Microsoft mice, the scroll wheel on the G5 has clicks when you rotate it. This is invaluable when you use the wheel to change weapons. Also the wheel can tilt left and right, making it ideal for games that allow you to lean around corners.


Just like the MX518, the G5 looks fantastic. The mouse surface has been given an aged look, where the bronze finish seems to have work off, exposing the grey beneath. I’ve seen fake ageing done many times before and most of the time it looks just that, fake. However, the G5 really does look like a tried and trusted sidearm that you’ve been carrying into skirmishes with you for years. Rounding off this premium package is a braded USB cable – yep, that’s right, there’s no PVC cable covering here, Logitech really wants this mouse to look special. 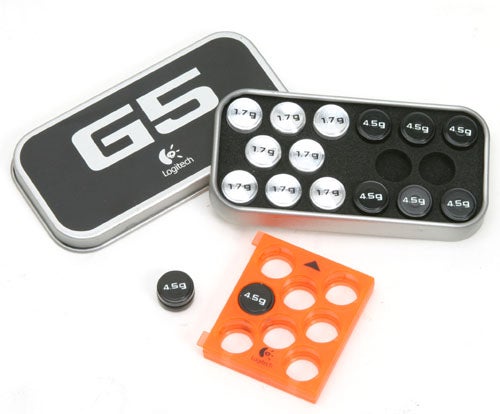 When I reviewed the MX518 I had to admit that it was expensive for a wired mouse, but that it was worth every penny. Despite the fact that the G5 is even more expensive than the MX518 was, I can’t help but come to a similar conclusion. Even with a price of £45.53 the G5 still feels like good value – after all, if you want high quality, you’re going to have to dig a bit deeper.


Once again Logitech has produced a first rate gaming mouse with features that you simply won’t find anywhere else. I thought it would be quite a while before I found a mouse better than the MX518, but I was wrong. If you’re serious about gaming, you need a weapon that can give you an edge – the Logitech G5 is that weapon.