The single best gaming mouse in the world – but it comes at a price.

What is the Logitech G Pro Wireless?

The G Pro Wireless is, according to Logitech, ‘the ultimate gaming mouse for esports professionals’. What it means is that Logitech has crammed its latest HERO (high efficiency rated optical) sensor and Lightspeed wireless technology into a mouse that is otherwise very simple and devoid of any extraneous features – just as most pro gamers like it.

This mouse also features a truly innovative ambidextrous design. You get buttons on both sides, but you can remove the ones you don’t want – such as those that would sit underneath your little finger – making it a mouse that left-handed and right-handed users can both use without compromise. It’s a bold approach to mouse design, but it’s one that has well and truly paid off. 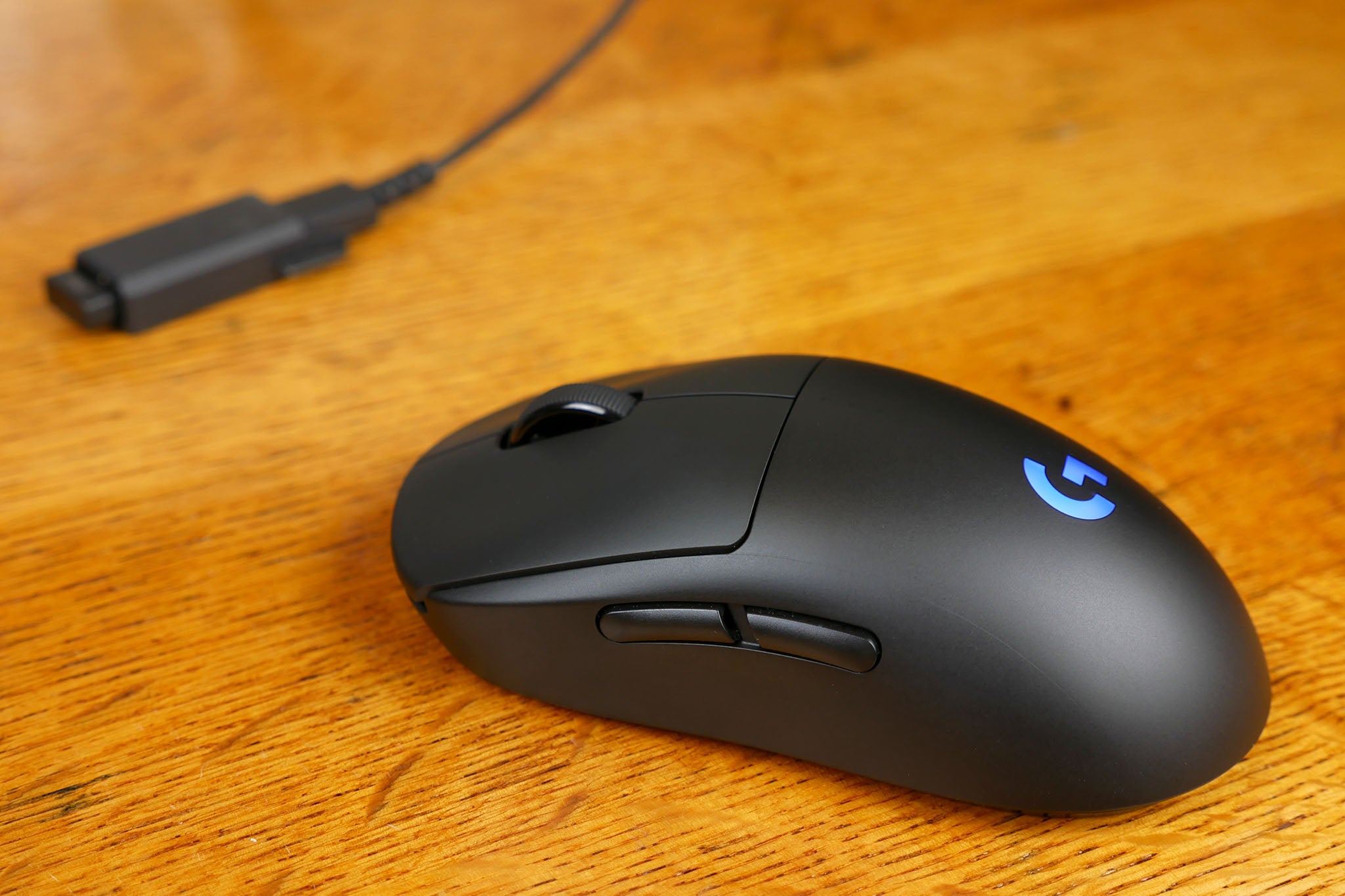 For such a pricey mouse that includes plenty of high-end features, the G Pro Wireless is, frankly, a bit disappointing in the looks department. It could just as well be any old cheap mouse, for all the impact its design has.

A uniform matt black plastic finish is adorned only by a single RGB-illuminated Logitech G logo and there are no other stylistic tweaks of which to speak. Flip the mouse over and the concentric ring pattern on shiny plastic somehow looks even worse than if they’d just stuck with the matt black.

Of course, as a pure gaming tool this is of little to no concern. But plenty of other very good gaming mice offer slightly more inspiring design without compromising on ergonomics or performance.

When it comes to build quality, however, there’s little cause for concern. It’s all very plasticky, but everything feels nice and solid, there’s no rattle and all the buttons have a crisp reassuring response. The left and right buttons also use Omron switches that are rated to last 50 million clicks.

In terms of features, the most obvious thing here is the wired/wireless design. You can either plug the 1.8-metre microUSB cable into the front of the mouse or into the supplied adapter, into which you also plug the USB wireless dongle. It’s a great system that makes it really easy to instantly switch between the two modes. 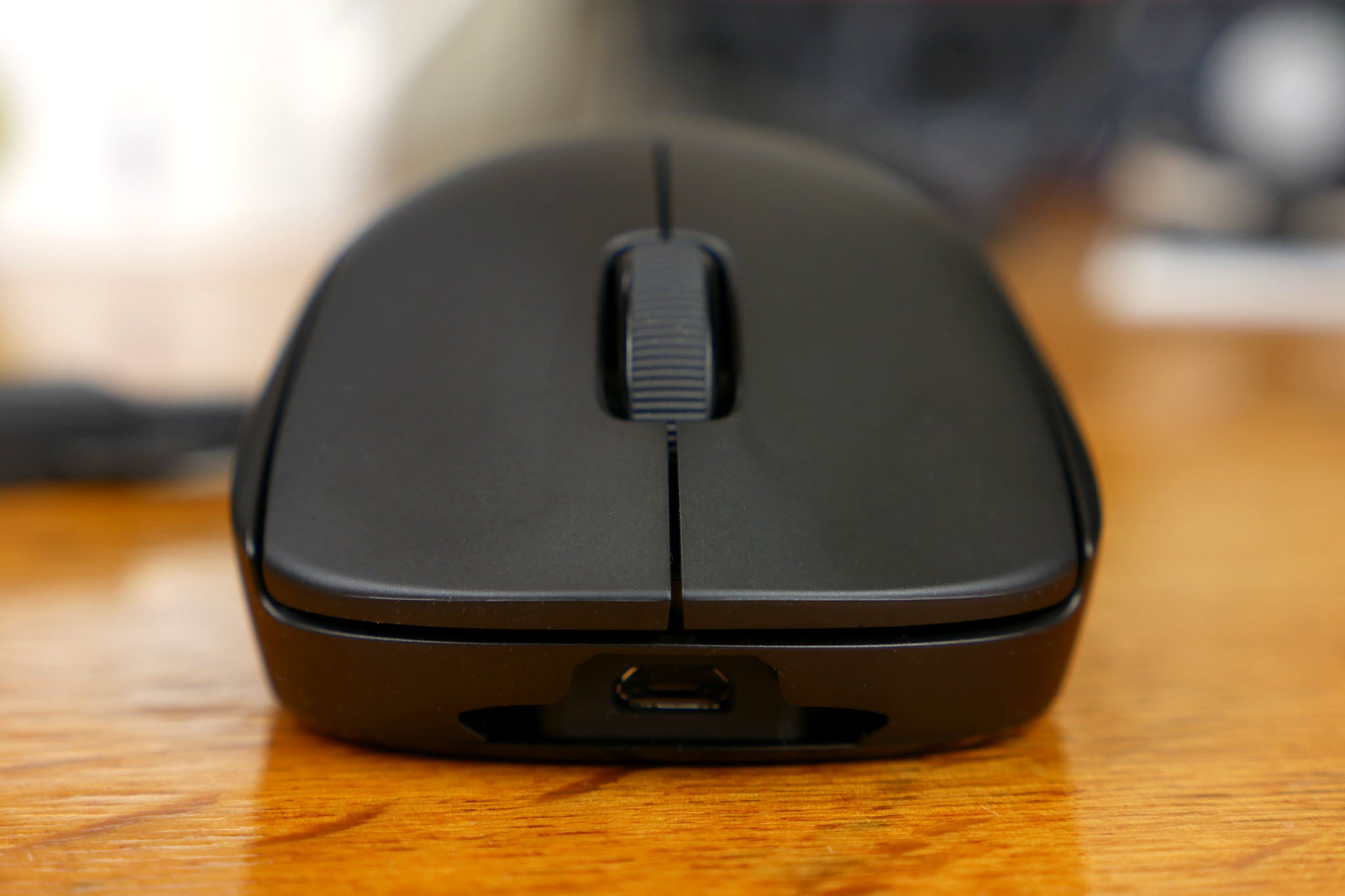 The cable has a large plastic protrusion around the plug that fits into a matching socket on the mouse. This helps keep the cable secure and protects the microUSB connection from having too much strain applied to it. But there’s enough room around the socket that you could use an alternative cable if the need arose.

The other key feature is the ambidextrous design. You get back and forward buttons on both sides of the mouse, so you can use it with either hand and still have them sit conveniently under your thumb. However, to help ensure you don’t press any buttons accidentally, you can remove the spare buttons on either side.

The buttons are held in place by magnets and it’s easy to just pull them off. Impressively, this modular design doesn’t compromise the feel of the buttons at all. They don’t move around and the switches feel as responsive as any other. 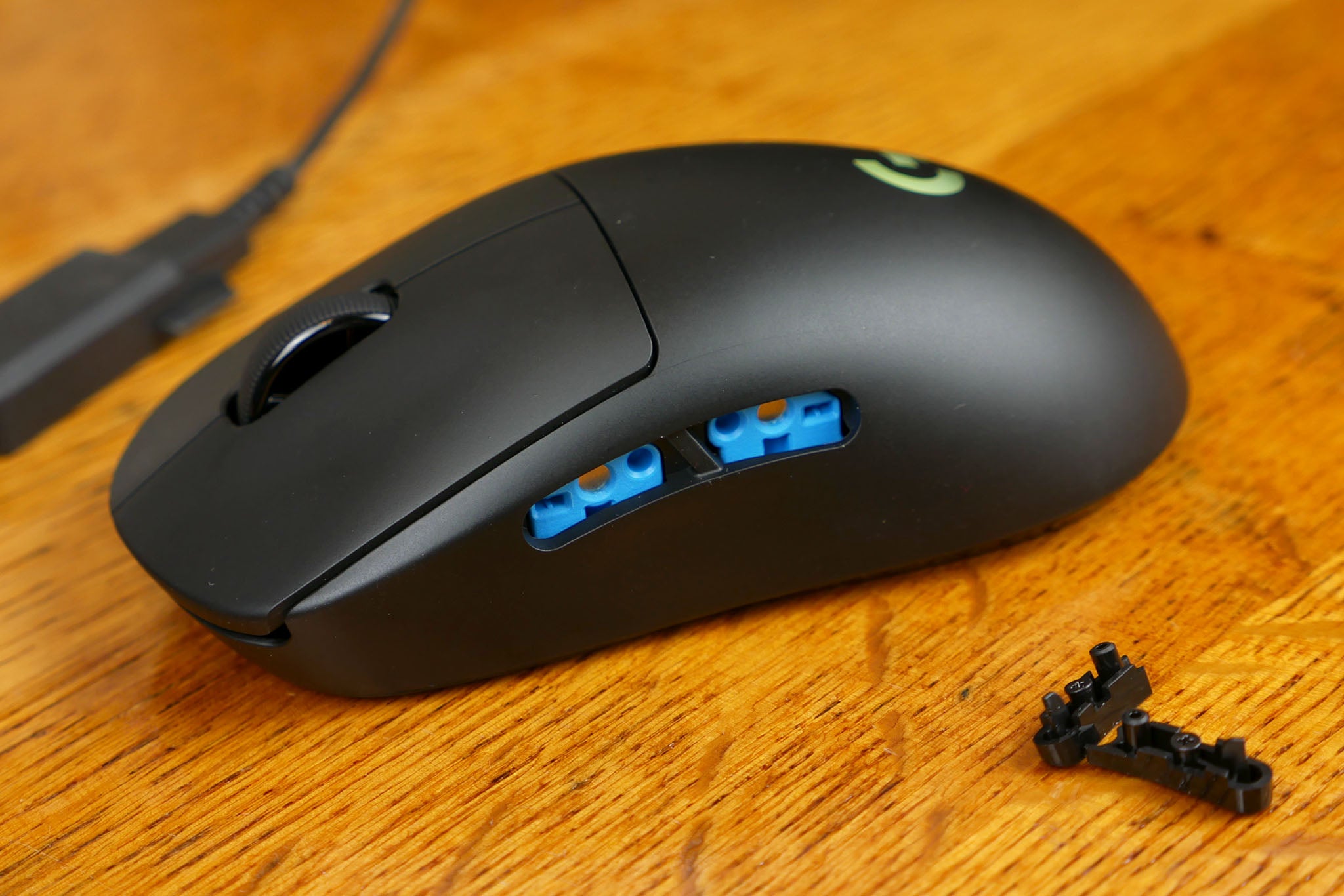 In terms of other buttons, this is where the G Pro Wireless really starts to show its pro gaming, minimalist approach. You get your standard left, right, back, forward and scroll wheel, but that’s it. There’s no DPI button, sniper button, or any other extras on the top surface of the mouse.

Flip the mouse over and there is a DPI button (at least by default – all the buttons can be reassigned in Logitech’s software) but this is clearly not of any use mid-game, and it’s still pretty inconvenient if you like to switch DPI settings while on the desktop or switching between games.

Tap the DPI and on the top of the mouse you’ll see several of five tiny LEDs light up, indicating which DPI setting you’ve chosen.

You also don’t get much in the way of other extras, such as a weights system or a second sensor, like on the SteelSeries Rival 600.

There is a little removable panel on the underside of the mouse, but this is for docking the USB adapter, so you can potentially use the mouse as a travel mouse. Also, if you remove the cover, you save an extra couple of grams too.

As for what’s on the inside of this mouse, Logitech makes some grand claims about its LightSpeed wireless technology, but the only number that can be put to those claims is a 1ms latency. I’ve seen other mice claim such a low figure before, but have still been able to detect a difference compared with wired mice. 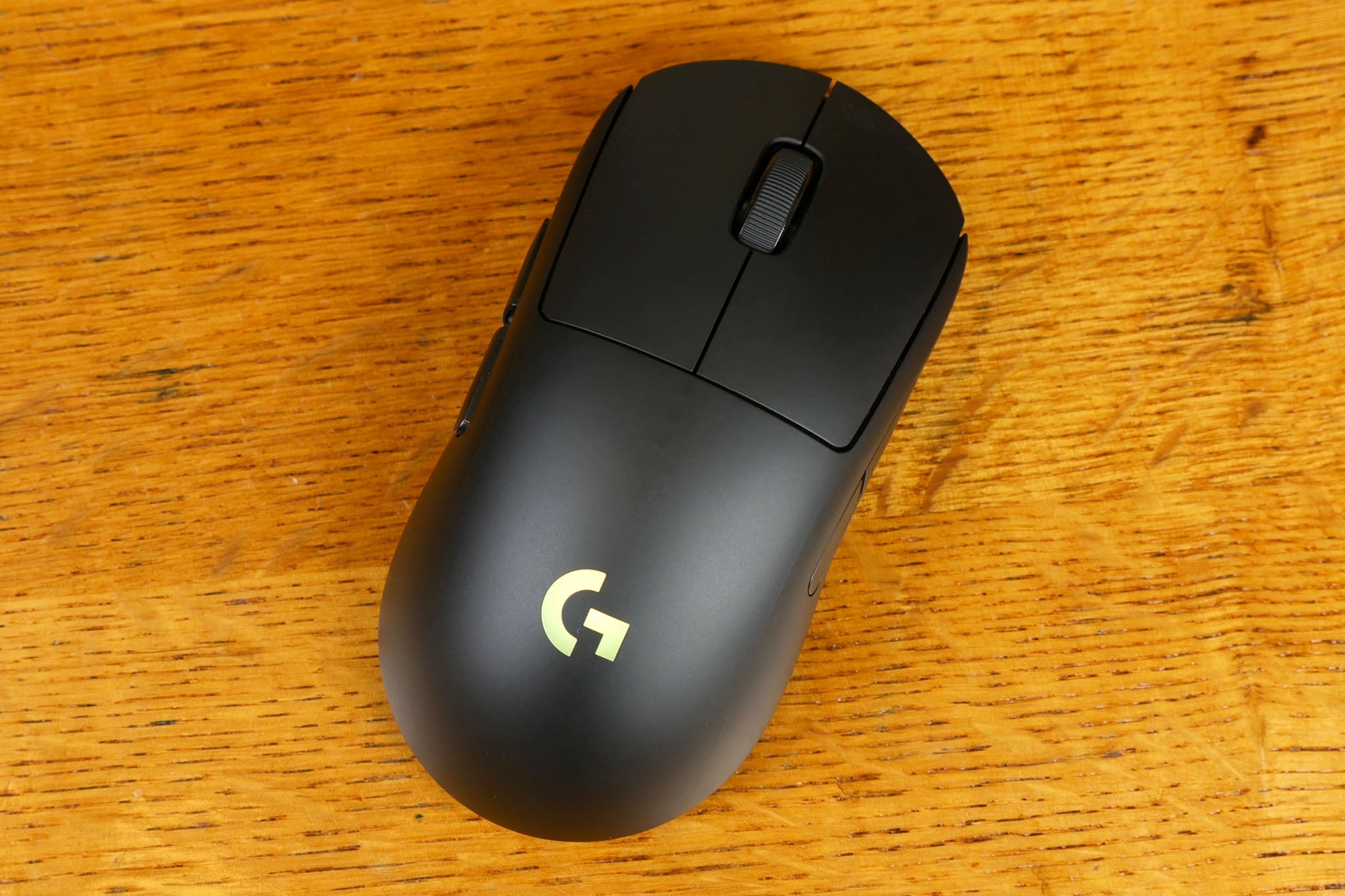 As for the HERO sensor, it’s rated to a maximum DPI of 16,000 and minimum of 100DPI, with Logitech’s software offering the option to change this in increments of 50DPI. It can also track at speeds of up to 400 inches per second and with acceleration of 50G. In other words, on paper it’s as capable as any other top optical mouse sensor available right now.

Crucially, though, this sensor is also vastly more efficient than previous ones. This has allowed Logitech to claim double the battery life of some of its previous wireless mice. While the G403 was rated to 22 hours or 30 hours of battery life, depending on whether the lighting was turned on, the G Pro Wireless is rated to 48 hours and 60 hours respectively.

Logitech provides a universal piece of software for managing all its gaming peripherals, which it calls… Gaming Software. This isn’t the most comprehensive software I’ve seen for managing a mouse, but it’s easy to use and provides the most important features.

You can change all the button assignments – including enabling or disabling any of the four side buttons – set up to five DPI settings, change the polling rate from 125Hz up to 1000Hz and create up to five profiles.

Notable absences include a lift-off distance setting and any option to enable or disable acceleration (this can be changed in Windows and the mouse defaults to having no acceleration of its own). 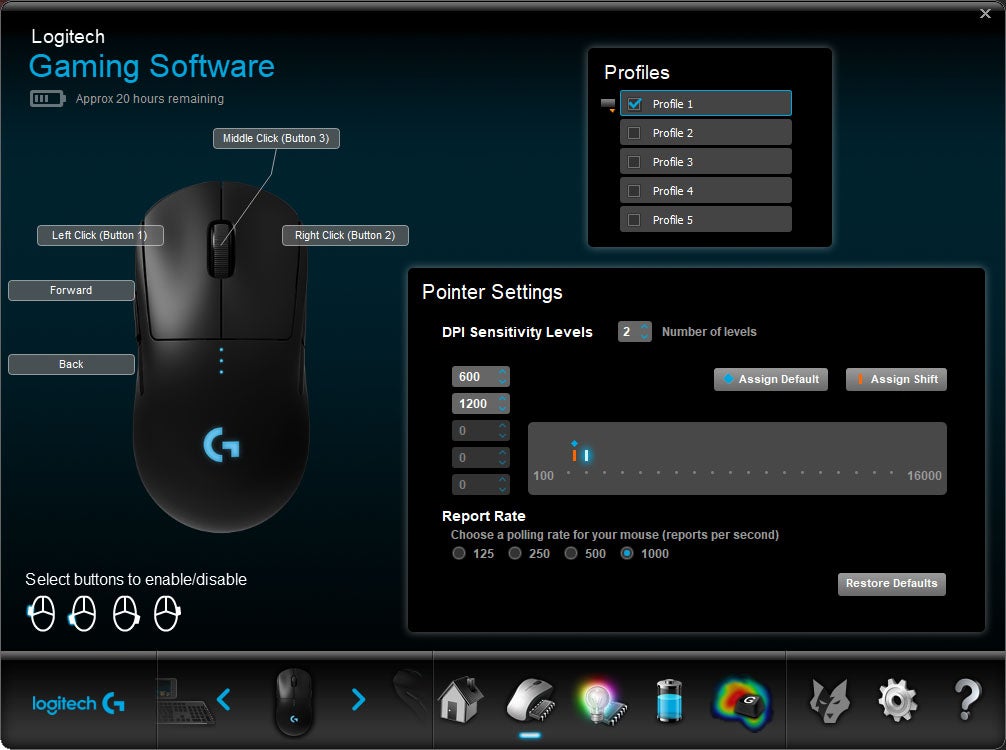 The RGB lighting behind the G logo can also be controlled, with options to assign different lighting to different profiles, switch the lighting on/off for either the logo or the DPI lights, and of course change the colour, brightness and effect. You can choose from a colour cycling effect, a colour breathing effect or just a fixed colour.

All profiles and settings can be stored on the mouse’s memory so that you can have the mouse function as you like, even when the Logitech software isn’t installed.

There are three main considerations when it comes to the performance of a mouse like this. There’s how comfortable it is to use, how well it tracks and how well the wireless works.

Regarding the first of these, the G Pro Wireless is superb. Logitech has done an amazing job of creating a mouse that’s small and light yet still very comfortable to use in a variety of grip styles, all the while being ambidextrous.

Weighing just 80g, it’s phenomenally light for a wireless mouse, making it easy to move around very quickly for prolonged periods of time. Likewise, with dimensions of 125 x 63.5 x 40mm it’s very well suited to fingertip and claw grip styles. There is still enough bulk in the back to allow for small hands to use a palm grip style. But those with larger hands will likely find it a little small. 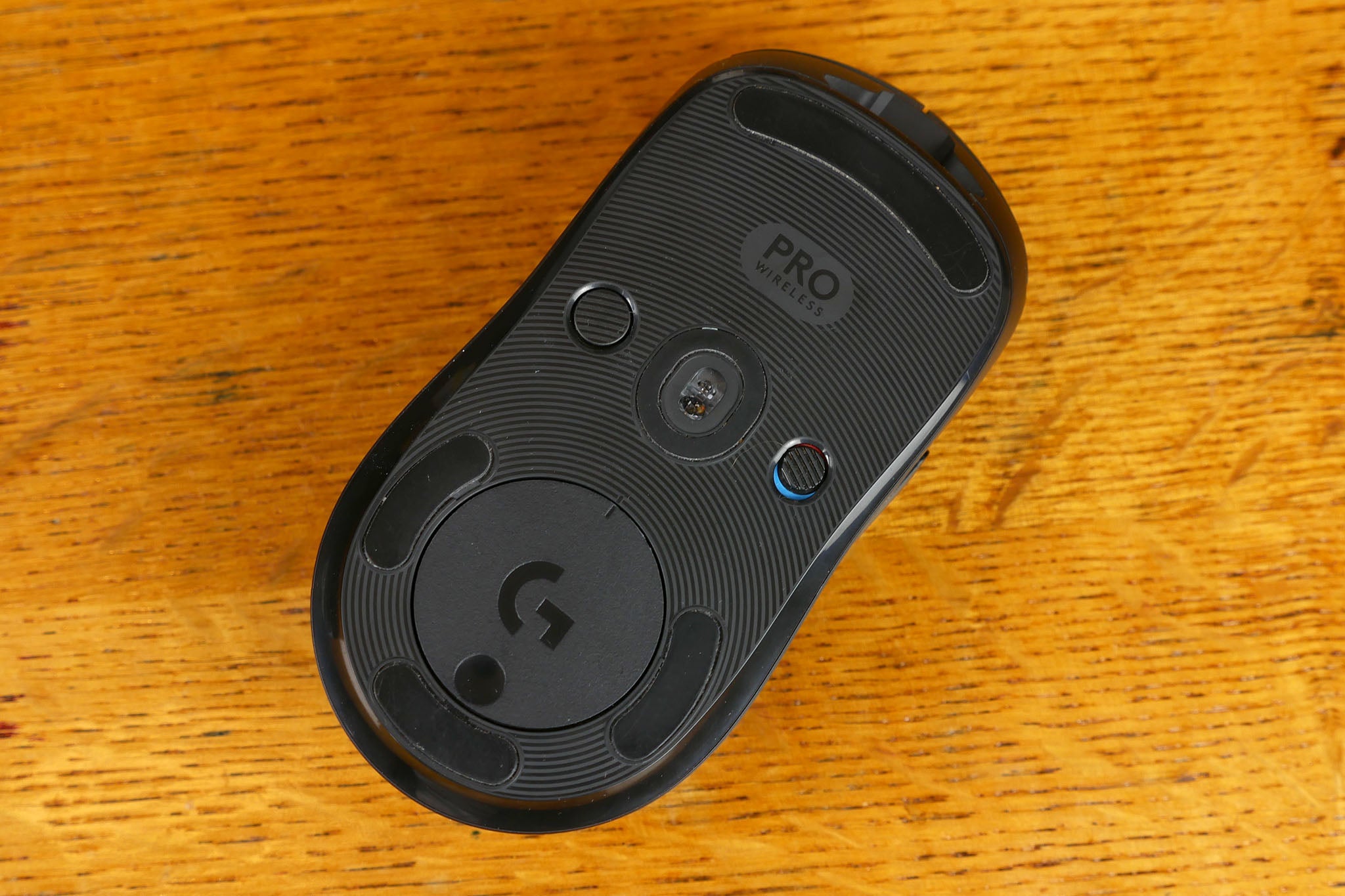 Logitech has also done a great job with the shape of the mouse. The sides have just enough of an outward flare at the top to aid your grip, while the left and right buttons have a tiny dip in the centre to help you centre your fingers on the buttons.

The mouse is also perfectly balanced and the matt black plastic finish provides plenty of grip. We’d have preferred the sides to be rubber, but – assuming it doesn’t polish to a shine too quickly – the matt plastic does the job.

While design preferences may vary, when it comes to creating a mouse that’s universally as comfortable as possible, Logitech has aced it.

The same can be said of the HERO sensor and its tracking performance. Assuming you’ve coupled it with an appropriate mousemat – optical sensors don’t work well with reflective surfaces like stone and glass – the G Pro Wireless performs perfectly. There wasn’t a single moment in testing where the mouse didn’t respond in exactly the way I’d expect, no matter how fast I moved. 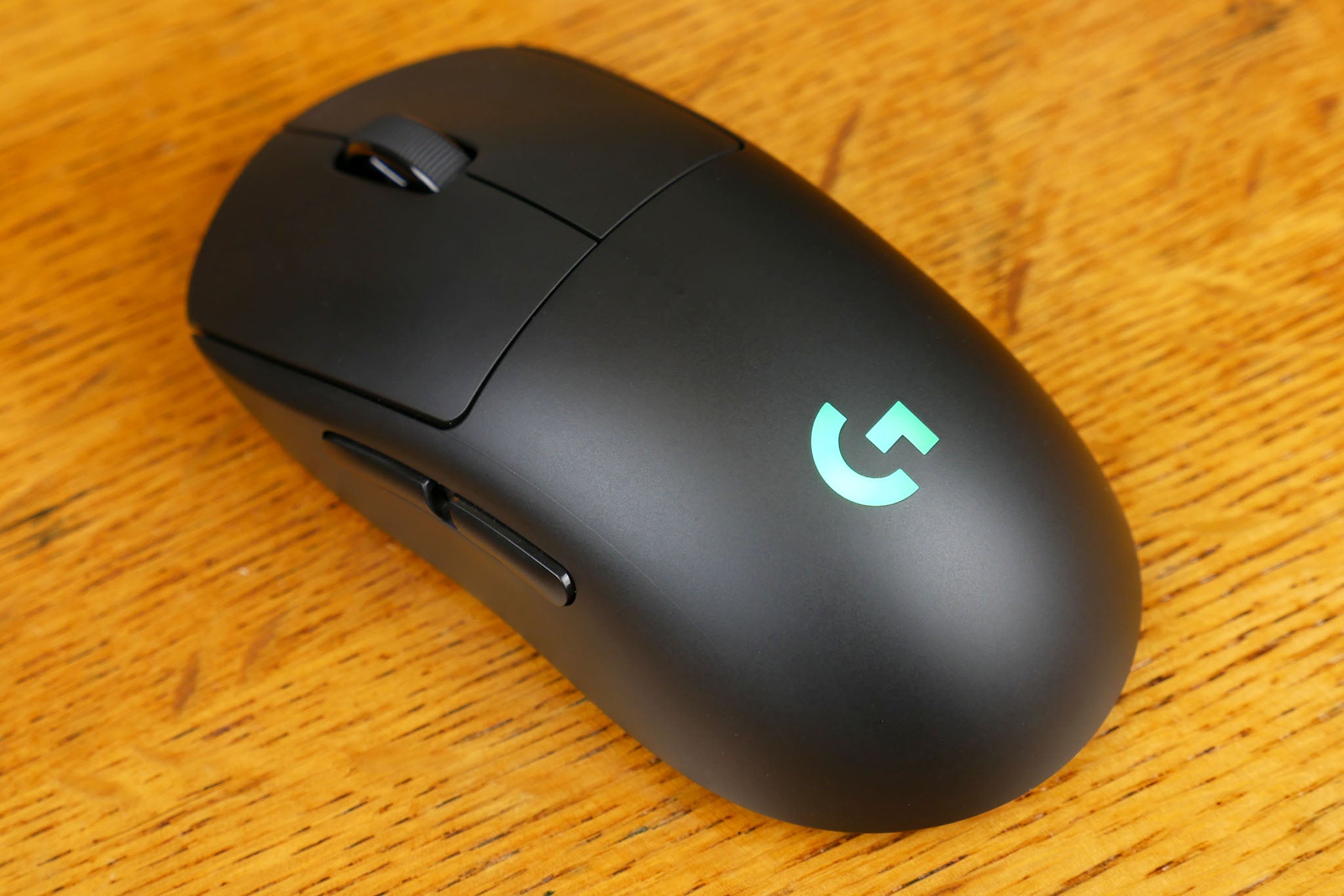 Finishing the clean sweep of grade-A performance is the Lightspeed wireless technology. Put simply, this is the first wireless technology I’ve used that can truly provide wired-like responsiveness. Compare it back to back with Logitech’s previous wireless technology used in the likes of the G403 wireless, and it’s as clear as day how much sharper this mouse feels.

It’s possible there is still some slight delay compared with a wired mouse. But unlike with every other wireless mouse I’ve used, I wasn’t immediately able to sense it here.

As for battery life, Logitech’s claims were not something I directly tested, as these relate to gaming time. Instead, I found the G Pro Wireless would last around a week if used for eight to 10 hours a day for general desktop work, and with a few hours of gaming across the week. In contrast, the G403 would need recharging in a day or two. 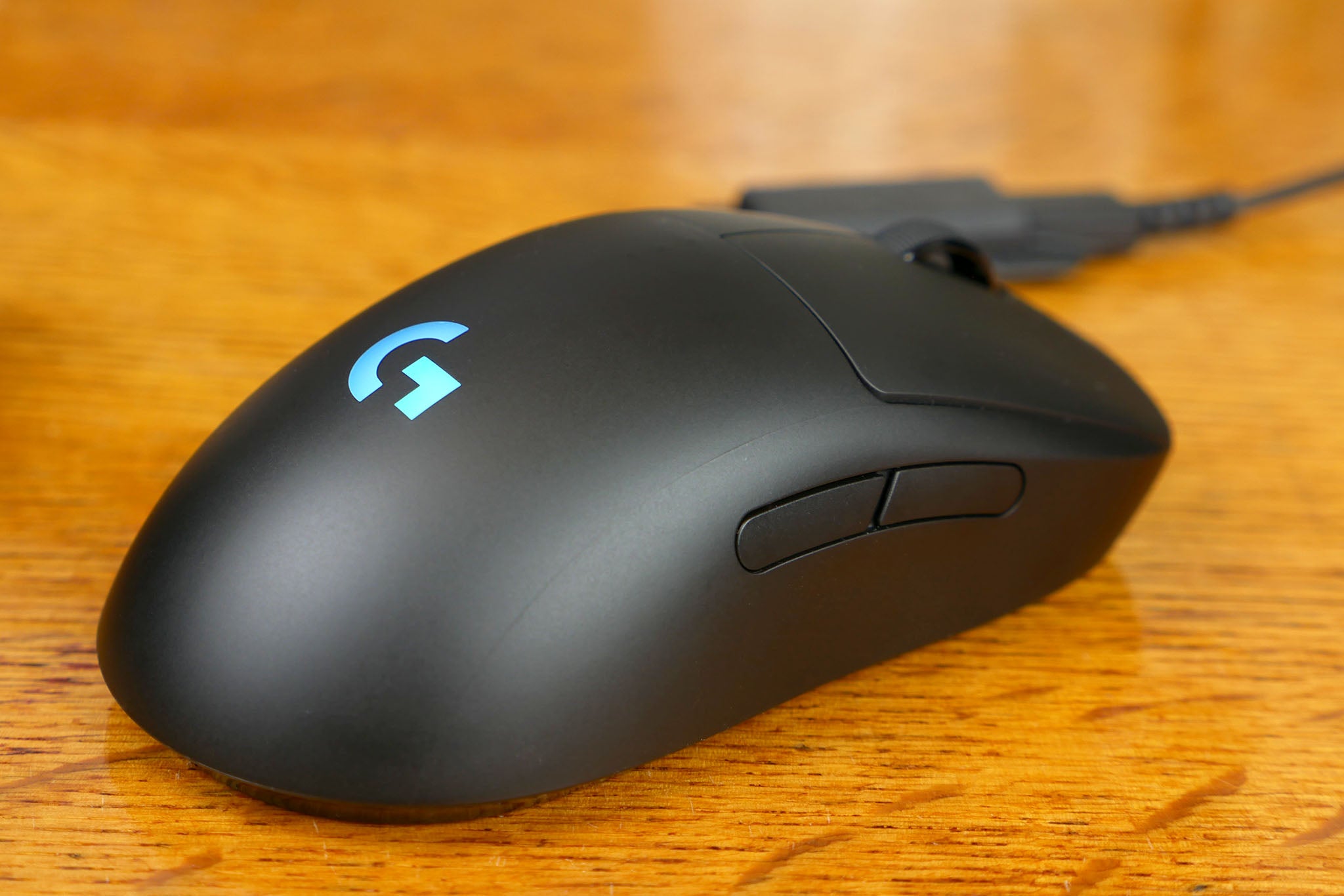 The Logitech G Pro Wireless is gaming mouse perfection. While no mouse can ever be perfect for every gamer, this is the closest I’ve ever seen one come.

Not only does it have a true ambidextrous design but it also offers the option of wireless without sacrificing performance and without the compromise of a short battery life or heavy design. Meanwhile, the tracking provided by its HERO sensor is as good as you can get.

There are just two potential stumbling blocks. The first is the lack of a DPI switch on top of the mouse. It didn’t bother us for gaming, but it was a tad annoying when switching between games and doing desktop work.

The other is the price. You get a decent amount for your money – the wireless/wired hybrid functionality, the excellent sensor and wireless technology, and the modular side buttons – but the G Pro Wireless just doesn’t look or feel like a premium mouse in the way that something like the Razer Mamba does. As such, it just falls shy of getting our highest possible score.

The single best gaming mouse in the world – but it comes at a price.