It’s getting more and more difficult for peripheral makers to come up with ways to differentiate their non-gaming mice and keyboards, but two companies which still consistently succeed are Microsoft and Logitech. In fact, the Logitech Wave keyboard made it into third place for Best PC Accessory in our 2008 Awards. Cheap and very cheerful indeed, about the only things we could possibly have wished for is that it was wireless, and had an accompanying mouse. Never one to rest on its laurels, Logitech has complied on both points, and brought us the Cordless Desktop Wave Pro. This combines a wireless version of the Wave with the MX1100 cordless laser mouse, in theory making for a great set. 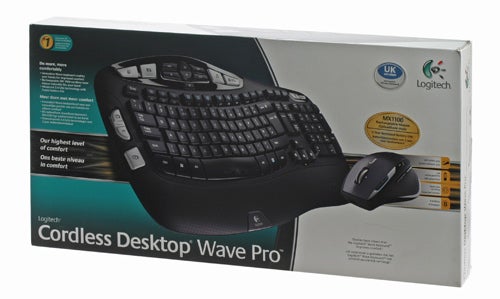 The Wave Pro is presented with Logitech’s usual care. Though the quick-start guide seems to have fallen by the wayside, there is a clear and well-illustrated multi-lingual user’s guide. Aside from the keyboard, mouse and dongle, there is also a glossy black USB charger with interchangeable European or UK power plugs, and a USB-A to Micro-USB cable for the rechargeable mouse.


This wireless set is the easiest I’ve come across to install. You don’t even need to insert batteries or charge the mouse, since batteries are pre-inserted and the one in the mouse is pre-charged. Simply remove the battery-isolating tags, switch on both peripherals, plug in the USB dongle and you’re ready to go. 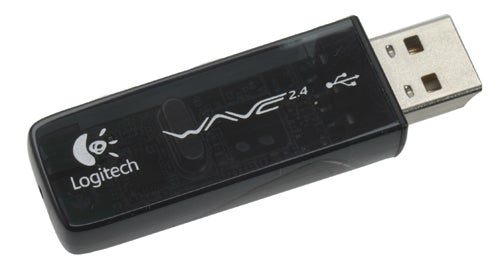 One of the greatest annoyances with many wireless mice is that, if you forget to place them in their charging cradle, you can come to your desk and find a non-responsive rodent. Even worse is running out of battery power in the middle of that important presentation you’re preparing, or that tense match of Counter Strike. As you might have guessed from the charger and cable, Logitech has come up with a solution to this problem (though it’s hardly the first or only company to have done so). Simply plug the USB cable into the charger or any powered USB port on your computer, and you can use the MX1100 while charging it at the same time — though you’re unlikely to need to do this often, since Logitech claims a whole six weeks of use from a single seven-hour charge! If you hate the thought of ever using a wired mouse again, you can even get an entire day’s worth from a quick 15-minute charge, or just replace its Ni-MH AA battery with an alkaline one. 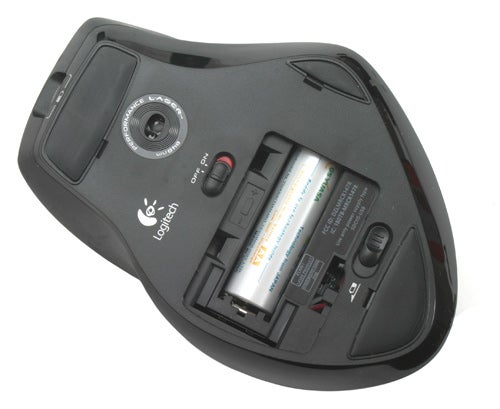 This is all excellent stuff, with the only minute niggles being that the mouse has a Micro-USB port rather than the far more common Mini-USB, and that the wireless dongle still needs to be plugged into your PC for the mouse to actually work. Unfortunately, Logitech hasn’t implemented the same cable system for the keyboard, which still runs off two AA alkalines. However, not only can you use rechargeable batteries with a separate charger, a simple pair of alkaline AAs give the Wave Pro keyboard a stunning claimed battery life of ”three years”! Of course both peripherals have indicator lights to warn about low battery life. 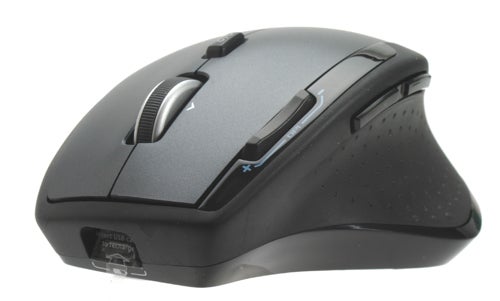 Being shaped for one hand only does mean the MX1100 is very comfortable, though. On the left is a large thumb-rest coated with soft-touch rubber, while the right side has similar support for the ring and pinky fingers. Overall, the curvaceous contours of the mouse places all your digits comfortably and easily where they need to be. Likewise the wheel and buttons are all very easy to reach, with the one exception being the forward thumb button, which can be difficult to press without inadvertently pressing the back one.

As with all Logitech mice I’ve ever tried, button feedback is excellent. The four-way micro-gear ‘freewheel’ scroll wheel also makes a welcome return, meaning you can scroll through the longest document with just a flick of the finger. You can switch between this and notched scrolling (for games) with a button conveniently located just below the wheel — unlike the G9, where you had to turn the peripheral upside-down to get at it. 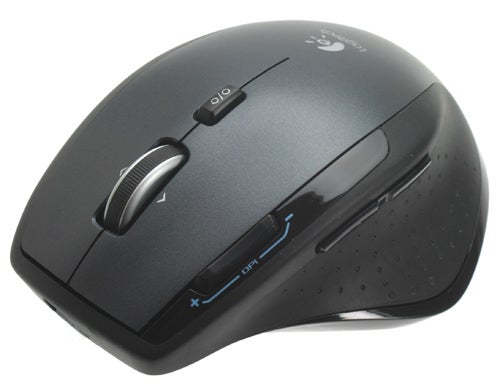 Speaking of the G9, I also prefer the MX1100’s implementation of DPI switching. That’s right, for perhaps the first time in a non-gaming mouse Logitech has provided hardware sensitivity adjustment. A two-way rocker just to the right of your index finger chooses between two presets which you can set between 400 to 1600 DPI. All of this combined with the lag-free 2.4GHz wireless connection makes the MX1100 more suitable than most wireless bundled mice for gaming, but the DPI switching is handy for work as well as play.

Getting onto the keyboard, little has changed from the original wired Wave, but that’s no bad thing. The titular wave refers to the ergonomically curved alphabet keys, lending it a feel reminiscent of the split ergonomic ‘natural’ keyboards of old. And indeed, it is very comfortable to use, also thanks to the permanently attached and thickly-cushioned palm-rest which is covered with perforated anti-sweat material. 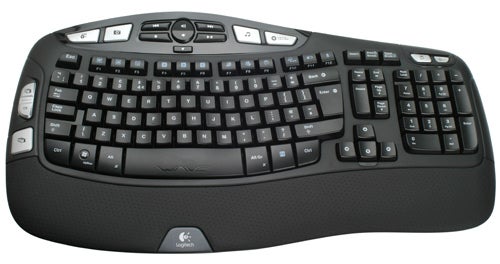 Key feedback is good, and barely audible apart from the noisy spacebar. It doesn’t feel quite as positive as the Microsoft keyboard I was typing on till now (the Entertainment 7000), but after getting used to it, its soft feel is very pleasant. The flat angle is healthiest to type on, but for those who prefer their keyboard to be sloped there’s a twin-leg system that can raise the Wave by four or eight degrees. 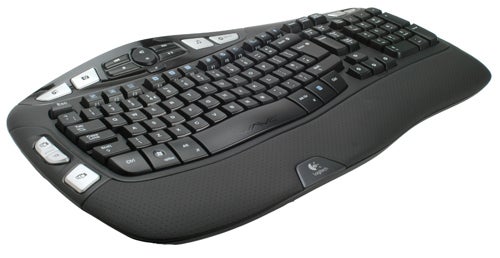 There’s a range of large dedicated shortcut buttons, including a handy zoom control to the left of the Tab key. There is also a full set of media controls including an easy-to-use volume rocker with mute, play/pause, stop and track selection arranged around it. Meanwhile, a ‘function’ key beside right-Ctrl activates secondary functions for the F-buttons. Thanks to Logitech’s ever-excellent SetPoint software, all of these can be assigned to functions or custom keystrokes different to their defaults. 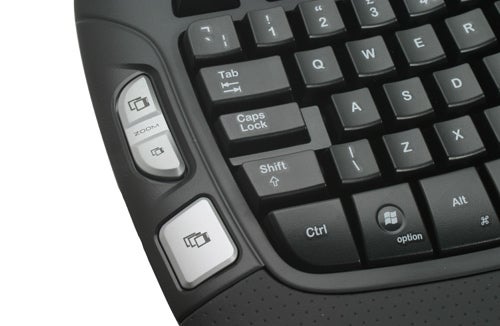 Overall then, we have a set that’s high on comfort and usability, with generally excellent build quality. An ergonomic keyboard combines with one of the best rechargeable mice on the market, which unlike previous Logitech models such as the otherwise amazing MX Revolution won’t become permanently useless if the battery dies. Compared to Logitech’s own MX5500 Revolution wireless mouse and keyboard set, the Cordless Wave Pro wins hands down, with the only trump card of the MX5500 being its occasionally handy LCD screen. 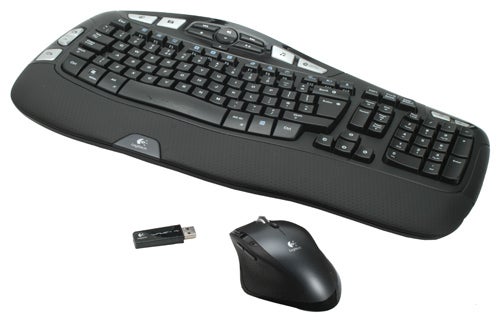 Best of all, at £72 the Wave Pro is available for £20 less than the MX5500. This price is in line with other high-end desktops, and cheaper than getting the MX1100 mouse and ”wired” Wave keyboard separately. Good news for casual gamers is that the Cordless Desktop Wave Pro isn’t as averse to fragging as most wireless sets either. Yes, it’s expensive, but often you get what you pay for, and peripherals — like monitors — are one area where it’s not worth skimping as they affect your health and comfort.


Logitech has gone to town with its Cordless Desktop Wave Pro, which combines good looks and comfortable ergonomics without breaking the bank. Essentially, if I had to get a cordless mouse and keyboard set right now, this is the one I’d go for.