The BluTech Vision is Loewe’s debut Blu-ray player and is everything you’d expect from the revered German brand – expensive, esoteric and gob-smackingly stylish. It comes in a choice of Anthracite or Chrome Silver, and the fascia is fitted with a drop down panel that hides everything, leaving only a silver porthole in the centre that gives it a sense of uniformity with Loewe’s TVs and audio components. Sadly the front panel isn’t motorised, which would have been the icing on the cake (something you’ll find on the cheaper Sony BDP-S500) but on the whole this is one of the best-looking Blu-ray decks out there.

Open up that front panel and you’ll uncover the disc tray and two buttons, but not even a sniff of a USB port or memory card slot. All the important business is round the back, with an encouraging set of connections that includes an HDMI v1.3 output that can output Dolby True HD, Dolby Digital Plus and DTS HD soundtracks in bitstream form as well as 1080p pictures at 24 frames-per-second. You’ll also find a set of component video outputs (though you can’t output from component and HDMI simultaneously) plus S-video and composite ports, the latter still a bizarre inclusion on a hi-def player.

Dolby Digital and DTS bitstreams can be transferred to your receiver using either the optical or coaxial digital audio outputs. Alternatively you can hook up the 5.1-channel analogue outputs and listen to decoded Dolby Digital and DTS soundtracks. However, there are no built-in Dolby True HD or DTS HD decoders, and the unit doesn’t support DTS HD Master Audio at all, making its audio talents seriously limited. Rounding up the sockets are separate stereo audio output and a USB socket for software updates.


As well as BD-ROM discs, the unit happily supports BD-R/RE and DVDs, upscaling the latter to 1080p if desired. It’ll also play your collection of home-burned DVD+R/-R/-RW discs, plus CDs and CD-R/RWs, but the disc’s inability to play discs containing MP3, WMA and DivX files is a real let-down.


Also disappointing is that the BluTech Vision is a Profile 1.0 player, which means there’s no chance of accessing picture-in-picture features found on some recent Blu-ray releases (load ”Resident Evil: Apocalypse” and the PIP feature is nowhere to be found), and even less chance of accessing BD Live features (the lack of Ethernet port is just one of several reasons why).

Loewe’s products are sometimes confusing to use and tricky to install, but that’s not entirely the case here. Installation is simplified by a very clear main menu that groups the options into three main areas, using large graphics and bold text. Under settings, you’ll find a long list of parameters to tweak, from speaker settings through to HDMI output resolutions. All of these are clearly structured, and many of the submenus provide dialogue boxes that give handy hints about the options you’re choosing. 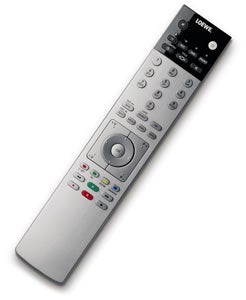 But it’s not all plain sailing. It’s sluggish when navigating around the setup menu, and some elements of the remote are counter intuitive – who’d have guessed that the ‘text’ button would double as ‘return’? – while its ability to also control a Loewe TV, recorder and radio means that the extra buttons and misleading labels can muddle things up. It is, however, well-made and elegantly designed, finished in brushed aluminium with buttons that give a satisfying click when you press them.

One of the options in the setup menu is Quick Start, which enables the deck to boot up much quicker than usual, but it does use more power in standby – ecologically-minded users might want to disable this feature. The only other deck with this feature is the Sharp BD-HP20H, which arouses suspicions that this might be the same player in different clothes – the feature list and menu design are also similar.


When loading up our ”Spider-Man 3” test disc in Quick Start mode, the disc started playing after about 35 seconds, compared to one minute and 49 seconds with the function turned off. But as the disc’s main menu started to play, it stumbled over the Java-heavy content and movement was severely jerky, only smoothing itself out after a couple runs through the menu sequence. On one occasion, the unit simply turned itself off after pressing ‘Play Movie’ with no sound when it started back up, which meant it had to be unplugged at the mains, and on another occasion it froze up during playback. These glitches may be peculiar to our sample, but it hardly fills us with confidence.

Thankfully the quality of Blu-ray playback is good enough to spare the BluTech’s blushes. The deck produces stunning 1080/24p images that make the most of the hi-def format, bringing an immense amount of detail to the screen – a quality best demonstrated by panoramic shots of the New York city streets or sequences involving ”Spider-Man 3’s” Sandman. Even the minutest details look sharp and focused, with the exceptional black level giving the image a deep and punchy character that holds up brilliantly on a large home cinema display.


Also, colours are richly saturated and skin tones are perfectly balanced, while the combination of clean processing and all-digital pixel mapping results in a complete lack of noise. The 24fps output keeps movement looking smooth, natural and judder-free, though vertically scrolling objects (such as end credits) do judder slightly.

Switching to DVD playback, the Loewe’s upscaled picture quality is good but not great. The image is clean and strongly coloured but detail reproduction lacks conviction, making The Two Towers’ picture look softer than it does on some rival hi-def decks and upscaling DVD players.


However, the BluTech Vision’s sound quality is top-notch. Using the built-in decoder and analogue outputs, the core Dolby Digital track is cleanly separated and smoothly steered, while dialogue is prominent and rear-channel effects are delivered with aplomb. With DVD-Audio and SACD off the agenda, this deck’s music performance is judged on CD playback alone, and it doesn’t disappoint. Through the analogue stereo outputs, The Crusaders’ ”Street Life” CD sounds wonderfully smooth and funky thanks to the fluid fusion of buoyant bass, crisp treble and solid midrange.


If you’re looking for visual decadence then no-one does it quite like Loewe, and the BluTech Vision is yet another addition to its impressive portfolio of eye-catching kit. It’ll make a stylish addition to your system, particularly if that system is made up of matching Loewe kit, but despite its seductive exterior we’re not enamoured by what’s under the hood – the profile 1.0 specification and limited hi-res audio support are bad enough, but the poor multimedia compatibility, sluggish interface and patchy performance rub salt in the wound, particularly at this price. You’re better off buying the Panasonic DMP-BD30, which is a cheaper and more talented player that gets you many more features and Profile 1.1 capabilities into the bargain.