Update: LG has changed the name of webOS TV to LG Smart . Read our full review.


What is the LG webOS TV interface?

LG’s new TV interface for 2014 is based on webOS, a piece of software originally used in mobile phones made by the now-defunct Palm. Its aim is to get rid of the clunky, unintuitive interfaces of previous and current smart TV interfaces.

The webOS interface is based around a Launcher window. This gives you access to all the main portals within the system, including streaming services like Netflix as well as more social services like Skype and Twitter.

One of its most important triumphs is that it looks a lot better than most current TV interfaces. And that’s more than just about being pretty – a lack of visual intuitiveness is one of the key problems with many current smart TVs.

The interface can be used with LG’s Magic Remotes, which let you use your TV remote a bit like a Nintendo WiiMote – or a laser pointer for the non-gamers among you. However, you can also use it in more traditional fashion too, with a remote D-pad. 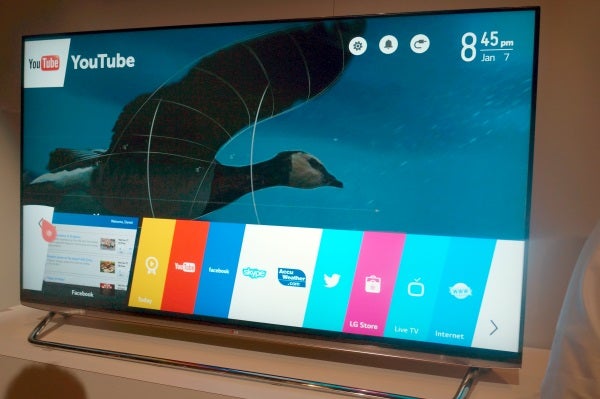 What the LG webOS interface will do for most people isn’t much different from any current smart TV interfaces. It’ll let you stream from online services such as Netflix and Amazon, look at your Facebook and Twitter updates on your TV and – if you’re desperate – surf the web.

Integrating Smart TV with your other ‘smart’ devices, webOS benefits from a range of second screen enhancements. LG has released a Connect SDK to allow developers to add webOS connectivity and support into their mobile apps.

Early demos include MusixMatch and allowed us to flick content direct to the home’s biggest screen direct from smartphones and tablets. This Connect SDK will allow everything from streaming, multimedia and imaging apps to offer effortless TV connectivity.

Smartphone control is also available. Although nothing new, the dedicated webOS remote app offers another, smooth means of navigating the linear launcher. With a touch keyboard at your fingertips it also aids tiresome input on the browser and search menus. 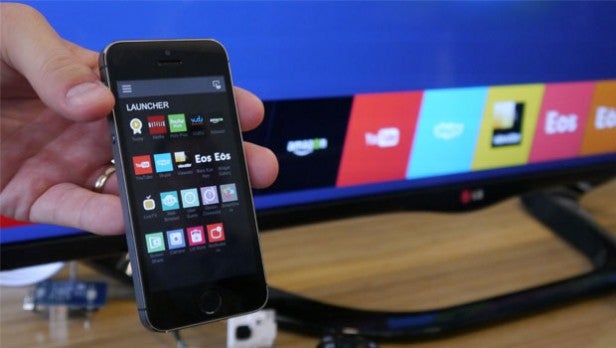 It has an app store-based software ecosystem, but most core services will come pre-installed on compatible TVs. In the UK, Netflix will be joined with BBC iPlayer and Demand 5 on the pre-installed list and will feature on the home launcher. There is currently no work on Channel 4’s plans to bring 4OD to webOS TVs.

Of course, the app-based system also means that the quality of some experiences will be down to third-party companies. As with most current smart TV systems, you can expect a shedload of fairly low-quality filler apps to appear on the LG Store. This is a minor case in point, but note the slightly quirky font in the Facebook app below (it’s a bit naff, we imagine this app may be made by LG).

On this, LG has issued developers with an SDK and promised to subject all webOS apps to a rigorous QA testing process. Hopefully this should help retain some form of platform stability and separate the junk from the experience-enhancing. 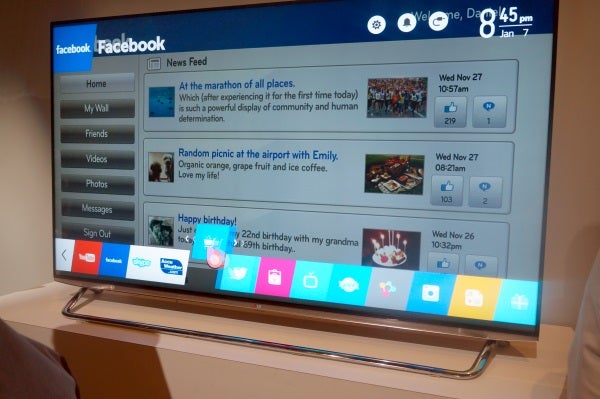 Aside from a slicker look and better support for LG’s Magic Remotes, the top benefit of using webOS is the system’s superb ability for multiasking. Or at least seamless switching between different apps or content streams.

The launcher overlay can be brought up wherever you are, making flicking between live TV and smart TV services. Part of the mission plan behind this new webOS TV interface is to break down the wall between ‘normal TV’ and smart TV, which remains a barrier for the less tech-savvy TV owner.

Things like Netflix are instead brought into the sphere of ‘things your TV can do’.  We’re not convinced the webOS interface will cause consumers to jump ship to LG, but it seems a good step forward in the way smart TV operates and will force rivals to take note. Core TV functions are built into this interface too, including switching between other sources – other HDMI ports and so on.

Much of this multitasking success is down to the way webOS was originally constructed – by Palm, and for mobile devices (primarily, at first). The erratic way we use phones was catered for well by webOS in phones like the Palm Pre, and LG’s TVs are now benefiting from this approach. 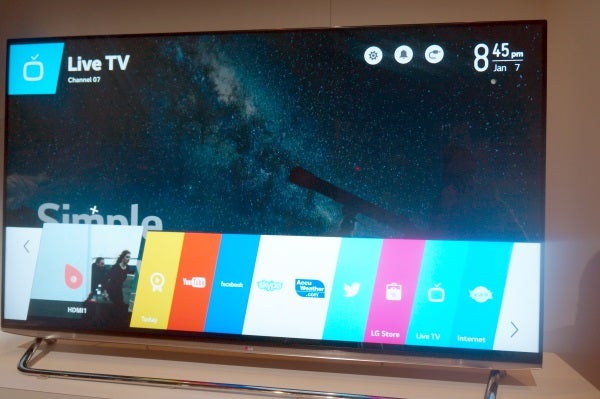 Part of the reason why the new LG webOS TV interface is able to look and feel so slick is that it requires a fair amount of power. All the TVs are rumoured to have at least 2.2GHz dual-core processors and 1.5GB of RAM.

If you’re expecting your current TV top get an upgrade to the webOS TV interface, you will be disappointed. LG has confirmed it will only feature on new sets. And not all 2014 LG TVs will use the interface. All the new UltraHD (4K) models will, but only 70 per cent of the new range in total will feature it. However, the slickness of the webOS interface is a good sign for the future of smart TV as a whole.