The beauty of these speakers is that they’re incredibly easy to install. Simply place the unit under your TV, power it up, connect the optical cable and you’re set.

Operation is child’s play too, thanks to the surprisingly attractive remote, which boasts a sparse but helpfully arranged selection of buttons. It’s styled in silver with rubber buttons giving it a high-quality feel in the hand. There are dedicated Optical, Bluetooth and ‘LG TV’ buttons to switch between sources, prominent volume controls and a Cinema Sound button.

The unit’s front LED blinks when you select certain modes and adjust the volume – it’ll take a little while to learn what it all means, but it’s not rocket science.

Despite its incredibly slim dimensions, the LG LAP340 musters an impressively loud and authoritative sound, perfect for blockbuster movies like Pacific Rim. It makes light work of the epic scraps between Kaiju and Jaegers, mustering thunderous bass and conveying a remarkable sense of scale.

During the movie’s first fight off the coast of Alaska, the monster emerges from the sea with a massive rumble and a huge, imposing roar. When the two start thumping each other, the blows are accompanied by big bursts of visceral bass from the impressive subs, effortlessly conveying their size and weight. It’s meaty and full bodied, which is a remarkable achievement from a cabinet that’s slimmer than most Blu-ray players.

The LAP340 does a good job with high frequencies, too. As the robot’s weaponry is torn to pieces amid the lashing waves, the fizzing, crackling electronics and smashing glass sound crisp and airy. The LG’s dialogue is clear enough, with the subs lending subtle depth to masculine voices, although they sound a little compressed.

If we’re being critical, the LAP340’s sound isn’t the most smooth or disciplined we’ve heard, particularly at loud volumes. Its exciting, aggressive tone oversteps the mark at times, making certain midrange frequencies sound raspy and allowing bass notes to linger a fraction too long during those epic battles. Turning off the perfunctory Cinema Sound mode off helps a bit.

But these are minor issues – its sound quality still goes above and beyond what you’d expect from a 35mm-high speaker that you slide under your TV. Anyone stepping up from lacklustre TV speakers is likely be blown away by the LAP340’s volume, scale and energy.

We played a few tunes from a Bluetooth-equipped iPod too and the LG does a nice job with music, offering passable detail and warmth, although it comes on a little too strong in the bass department when playing more uptempo electronic tracks. But for convenient day-to-day music listening, it’s fine. 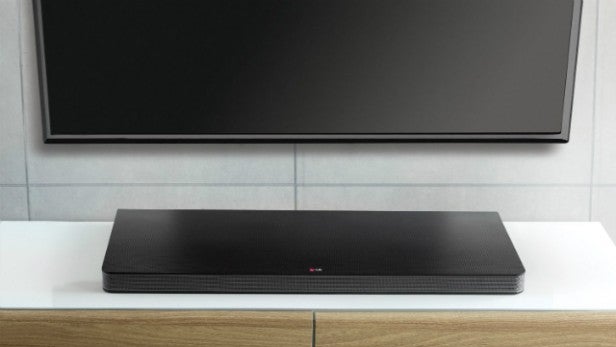 Should I buy the LG SoundPlate LAP340?

The LG LAP340 is an impressive under TV speaker, offering superb build quality, nice features and an impossibly slim design. Sound systems don’t get more discreet than this.

Even more impressive is its massive sound. It’s engaging, exciting and bass-heavy, filling your room with sound while keeping dialogue and detail nice and clear. It’s a little wild at times, but compared with most TV speakers this level of dynamism is a revelation, and it’s remarkable that it comes from such a slim speaker.

However, the LAP340 falls foul of the same criticism we levelled at the Bose Solo – it’s too expensive. Sure, it sounds great, build quality is superb and there’s built-in Bluetooth, but you get all that from the Denon DHT-T100 and Cambridge Audio Minx TV, both of which shave a good £100 or so off the LG’s price and throw in more connections to boot.

All of which makes the LAP340 a terrific purchase if you want a super-slim under TV speaker, but bear in mind that there are better value models on the market.